The once stalwart funder of anti-Castro causes, subject to allegations of labor exploitation in the Dominican Republic, sugar magnate “Alfy” Fanjul is now investigating prospects in Cuba. The historical and political ironies are unmistakable. 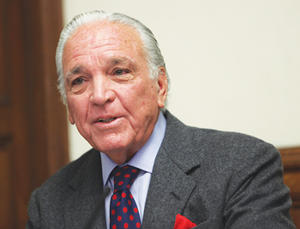 Alfonso Fanjul (fordham.edu)The Washington Post made a splash Sunday with a long feature on Palm Beach, FL-based sugar magnate and Cuban exile Alfonso “Alfy” Fanjul. The headline: “Sugar tycoon...now open to investing in Cuba under the right circumstances.” The article brings to public light what has been an open secret for some time now: over the last few years, Fanjul—a once stalwart funder of anti-Castro causes and organizations like the Cuban American National Foundation and the U.S.-Cuba Democracy PAC (the pro-embargo lobby)—has travelled to Cuba at least twice as part of delegations organized by the Brookings Institution. On the island, he has met with Cuba’s Foreign Minister and apparently toured under-producing state-owned sugar mills with an eye to future investments.

Cubans across the political spectrum can be forgiven for reacting as if hell had frozen over. For while any concrete deal appears a long way off (the U.S. trade embargo stands in the way, and Cuba has not yet officially courted Fanjul’s business), the historical and political ironies are unmistakable.

Alfonso Fanjul and his siblings descend from one of Cuba’s most powerful sugar dynasties, the product of a 1936 union between two already dominant sugar clans: the Gómez-Menas, whose involvement in the industry dates to the nineteenth century, and the equally historic Fanjuls, heirs to the Czarnikow-Rionda Company and its subsidiary the Cuban Trading Company. Incorporated in the United States in the early twentieth century, Czarnikow-Rionda and its affiliate primarily handled the importation of raw Cuban cane sugar to refineries in the United States while also owning several mills on the island. The lines between American, Spanish, Cuban, and other European identities blur in this transnational business history. (The Czarnikow in the company name, for example, refers to a Prussian-born Englishman who began setting up sugar brokerages in the 1860s.) At its peak of dominance prior to World War I, Czarnikow-Rionda handled more than 50% of all Cuban sugar exports. Its influence continued through the 1950s.

Between 1960 and 61, the Cuban revolutionary state nationalized all Fanjul/Gómez-Mena holdings on the island. The Cuban press pilloried family members as exemplars of a long tradition of robber barons and exploiters—lackeys of imperial interests. Their stately, art-filled mansion in Havana’s Vedado district eventually became Cuba’s Museum of Decorative Arts. In exile, the Fanjul family set about rebuilding a vast sugar conglomerate in the United States and the Dominican Republic, with substantial real estate investments to boot. Today, the holdings of parent company Fanjul Corp. include Domino Sugar, Florida Crystals, La Romana International Airport, and the luxury private resort known as Casa de Campo. Long supporters of a hard-line U.S. approach to Cuba, Alfonso and younger brother José have even invoked provisions of the controversial, embargo-tightening 1996 Helms-Burton legislation to go after anyone "trafficking" in a painting confiscated along with their family home in 1960.

All of which makes “Alfy” Fanjul’s apparent about-face on U.S.-Cuban relations newsworthy. Pro-embargo voices like Congresswoman Ileana Ros-Lehtinen have already issued vitriolic criticisms of his statements to the Washington Post. Supporters of greater U.S. diplomatic and economic engagement with Cuba, on the other hand, may feel inclined to cheer him on. Yet the ironies in this case are not limited to the shock of a once vigorously pro-embargo descendent of Castro government enemies now leaning toward rapprochement.

In the Dominican Republic, the Fanjuls have been subject to repeated allegations of labor exploitation, particularly of undocumented Haitian migrant workers with little to no legal standing before Dominican government institutions. The U.S. Department of Labor includes sugar from the Dominican Republic—much of which comes from Fanjul-owned plantations or is imported to Fanjul-owned refineries—on its annual "List of Goods Produced by Child or Forced Labor." Both a 2005 Canadian Broadcasting Company documentary and the 2007 film "The Sugar Babies," narrated by Haitian writer Edwidge Danticat, called attention to the working conditions of impoverished cane-cutters laboring at the Fanjuls' Central Romana. In the United States, meanwhile, opponents of U.S. agricultural subsidies and government protections have long criticized the Fanjuls for building their dominance in the domestic market on the backs of artificially inflated prices and the U.S. taxpayer.

So why is a government in Havana that still deems itself socialist flirting with such an alleged abuser of workers' rights? Is this a case of Cuba’s Foreign Ministry courting Fanjul’s influence in the halls of U.S. power (“Alfy,” a Democrat, is close with likely presidential candidate Hillary Clinton), temporarily playing to his fancy of restoring the family business to its geographic origins? Does Havana have a political "long-game" in mind with no real intention of bringing the aristocrats of yore back into the insular fold? Or, as one commenter on Facebook put it, is this simply an instance of “money talks, politics walks,” particularly under the leadership of a current Raul Castro government more open to wooing the foreign investment that the Cuban economy urgently needs? (Witness the rollout last week of the impressive new container shipping port and special trade zone at Mariel Harbor, financed in large measure by Brazilian capital. Indeed, the Brazilians are also responsible for some of the first foreign investments in the sugar sector since it was nationalized in the early 1960s.)

Time, one supposes, will be the ultimate judge. In the interim, even experienced Cuba watchers—on the left and the right, on the island and off—may be left scratching their heads.

Michael J. Bustamante is a Ph.D. Candidate in Latin American history at Yale University and a former Research Associate for Latin America Studies at the Council on Foreign Relations in Washington, D.C. He has written for Foreign Affairs, TheRoot.com, the Cuban magazine Espacio Laical, and Current History, among other outlets.