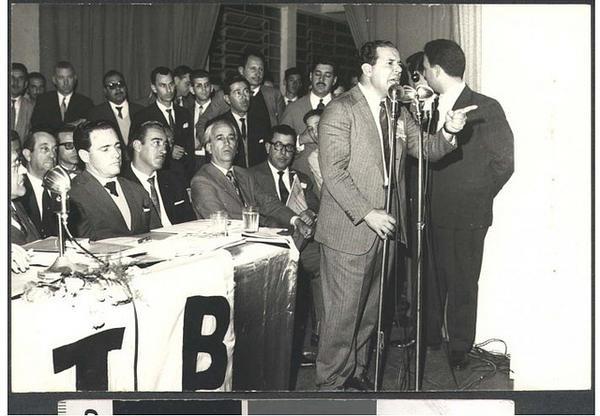 Yesterday and today mark the 50-year-anniversary of the U.S.-backed military coup d’etat in Brazil. The coup kicked off a brutal twenty-year-long military dictatorship. Similar military coups would follow in Bolivia, Chile, Uruguay, and Argentina. Together with the support of the U.S. government and Paraguay, under General Alfredo Stroessner, the region would organize Operation Condor, a political repression and terror campaign to suppress opposition to their governments.

To commemorate the 50th anniversary of the Brazilian coup, we are re-printing the following excerpt from the Brazil chapter of the book Latin America’s Turbulent Transitions: The Future of 21st Century Socialism, by Roger Burbach, Michael Fox, and Federico Fuentes (Zed Books, 2013).

In 1964, the Brazilian military dictatorship rolled in like a bad dream. President João Goulart fled to Uruguay, and with him went the hopes of progressive reforms. The first of seventeen military decrees, or Institutional Acts (AI), were issued. Institutional Act 5, decreed by military president Artur da Costa e Silva on December 13, 1968, suspended habeas corpus and disbanded congress. Inspired by the 1959 Cuban revolution, and insurgent guerrilla movements in Argentina, Colombia, Guatemala, Peru, Uruguay, and Venezuela, Communist Party militants went underground and formed armed movements against the dictatorship, including the National Liberation Alliance and the Popular Revolutionary Vanguard, which would later become the Revolutionary Armed Vanguard Palmares (VAR-Palmares).

Dissidents were tracked down, arrested, imprisoned, tortured, disappeared, or worse. According to the 2007 report from the Brazilian government’s Special Commission on Murders and Political Disappeared entitled “The Right to Memory and the Truth,” 475 people were disappeared during the twenty-year-long military dictatorship. Thousands were imprisoned and roughly thirty thousand were tortured. More than 280 different types of torture were inflicted on “subversives” at 242 clandestine torture centers, by hundreds of individual torturers.[i] Current Brazilian president Dilma Rousseff was at the time a student activist who became active in the VAR-Palmares (among other guerrilla groups). She was captured by the Brazilian military on January 16, 1970, tortured, and imprisoned for two and a half years, for participating with the guerrilla. Within a few years the armed resistance to the Brazilian dictatorship had been largely eliminated.

Meanwhile U.S.-Brazilian relations became tighter than ever, as the United States worked to turn Brazil into a “success story” in the fight against communism. According to a five-and-a-half-year 5,000-page investigation into the human rights violations of the dictatorship, entitled Brasil Nunca Mais (Brazil Never Again), CIA agents, such as U.S. officer Dan Mitrione, actively trained hundreds of Brazilian military and police officers in torture techniques, or what they called the "Scientific Methods to Extract Confessions and Obtain the Truth.” Several documented accounts reveal that Mitrione tested his techniques on street kids and homeless beggars from the streets of Belo Horizonte.[ii] Many of these techniques would be replicated across the region through the U.S.-sponsored Plan Condor, as Brazil’s neighbors also fell to military dictatorships.

This was the direction that the United States hoped the region would turn. Internationally, the military dictatorship broke off relations with Cuba and the Soviet block, and steered the country back into the U.S. sphere of influence (Cuba-Brazilian relations wouldn’t be resumed until 1986).[iii] “Never had there been such ideological convergence with the United States,” wrote the former Brazilian ambassador to the United States (1991–93), Ruben Ricupero, “not just in the perceived continuity and Cold War dangers, but in the acceptance of North American leadership and the feeling among Brazilian leaders that this was an inseparable and defining element in the internal struggle against communist subversion.”[iv]

Domestically, encouraged by the United States, Brazil liberalized its economy, pushed to increase exports, and opened up for foreign investment, but the economic model didn’t stick. Military president Costa e Silva steered the country back towards the import substitution model that would carry through the rest of the dictatorship. Meanwhile, ideologically, Brazilian military leaders continued their fight against the communist threat that would often place them even further to the right than U.S. officials.

[ii]            Cardenal Paulo Evaristo Arns, Brasil Nunca Mais, 1985, dhnet.org.br/dados/projetos/dh/br/tnmais/index.html; Esteban Cuya, “Las Comisiones de la Verdad en América Latina” website, derechos.org/koaga/iii/1/cuya.html; Dan Mitrione was transferred to Uruguay in 1969, which was battling the Tupamaros, perhaps the most successful urban guerrilla movement in Latin America at the time. In July 1970 Mitrione was kidnapped by the Tupamaros, and shot and killed 11 days later, after the Brazilian government refused to their demand that it release150 political prisoners.