The World Cup and the Neoliberal Transformation of Brazilian Cities 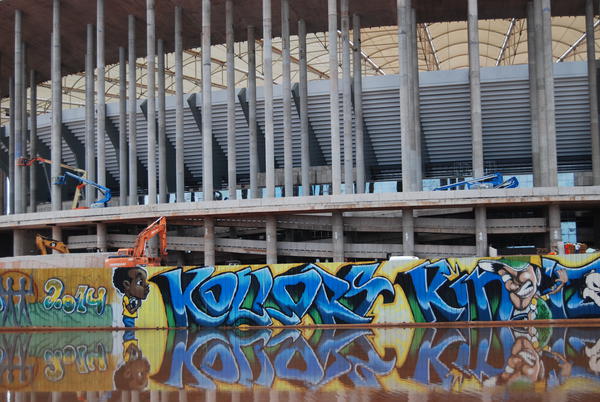 Although the huge street protests predicted by some northern journalists for 2014 are not happening, many Brazilians are still angry about the World Cup. One complaint is that local governments are using it as an excuse for neoliberal restructuring. Gentrification, transportation, and construction of white elephants contrast with the progressive, macroeconomic changes representative of 12 years of Partido dos Trabalhadores (Workers’ Party) coalition governance.

Elites governed Brazil for 500 years. Then, in 2002, a labor union leader with a fourth grade education named Luiz Inácio Lula da Silva was elected president. Lula reversed his predecessor’s neoliberal wage suppression policy and increased the minimum salary by over 150%. According to the Institute for Applied Economic Research, which conducted the most thorough study on the subject, this was the main cause for 26 million Brazilians moving out of poverty in just five years. Brazil avoided the 2008 world financial crisis; 4 million jobs were generated in the past three years and, despite glum predictions by the Economist, Brazilian GDP growth outperformed the United States, the European Union, and Russia last year. These achievements help explain why, despite frustration over the World Cup, Lula’s successor Dilma Rousseff recently polled 25 points above her closest competitor and is strongly favored for re-election this October.

Despite these advances, serious structural problems remain in the Brazilian political system. Due to an amnesty law, no one was ever punished during the transition from dictatorship to democracy in 1985. The dictatorship’s two official parties were allowed to change their names and maintain majorities in Congress (MDB, the Movimento Democrático Brasileiro became PMDB, the Partido de Movimento Democrático Brasileiro. ARENA, the Aliança Renovadora Nacional became PFL, the Partido de Frente Liberal, then DEM, Democratas). Both parties, traditional supporters of neoliberal policies, held cabinet posts in every presidency until 2002. Lula took power in 2003 and DEM left the governing coalition, but PMDB still controls the vice-presidency and key cabinet posts. This has led to what the UN special rapporteur on adequate housing Raquel Rolnik calls “a growth coalition that links Keynesian strategies for job generation and wage increases to a neoliberal urban development model, focused exclusively to facilitate market actions and open new fronts for finance capital, with the World Cup and Olympics projects being the most recent and radical."

Third world cities differ from those in the North because entire neighborhoods are located on squatted land with no formal deeds. 1.3 million people in Rio de Janeiro live in favelas, squatter communities that sprung up after slavery ended and grew exponentially during the migratory wave of 1950-1990 as the poor were left with no choice but to build on steep hillsides and floodplains. When Rio’s cocaine boom began in 1983, organized crime factions took over most of the city’s favelas, including the residents’ associations that validate informal real estate transactions.

Rio’s population doubled in a span of under 30 years and some favela real estate became desirable to the middle class. In 2008 the state government launched a program called UPP (Unidades de Polícia Pacificadora, or Police Pacification Units). It hired thousands of military police officers and set up stations in favelas on the city’s wealthy south side. These officers do not pursue thieves or conduct routine forms of police work; their only duties appear to be guaranteeing that the drug gangs that continue to work in the area do not carry weapons, and ensuring safety for utility companies to charge residents for their services. UPPs have been set up in all favelas located near the tourist hotel zone, Maracana stadium, and the drive in from the international airport.

The UPP's effect on real estate prices has been tremendous. Real estate agents have moved in and begun “flipping” houses. Rents have soared as the poorest residents are forced out into distant neighborhoods still controlled by drug gangs and paramilitary militias. One tenet of neoliberalism is strong private property rights, and although some argue that UPPs are a temporary security fix for World Cup and Olympics tourism, the fact that real estate tycoon Eike Batista donated R$80 million to the program suggests that they may be part of a long-term strategy to regulate the private property market in the favelas.

When the World Cup was first announced, governors and mayors promised major public transportation improvements. Last June’s protests, which started over frustration with São Paulo’s bus system, showed that this is a huge issue in Brazil where the government’s strategy of stimulating the auto industry to buffer the economy against the 2008 financial crises increased the already growing automobile fleet and caused huge traffic problems. The government set aside around one-third of the World Cup budget for transportation projects, but the results have not lived up to expectations. Manaus’ local government failed to build a solid enough proposal to pass the federal government’s auditing court, so planned monorail and BRT (bus rapid transit) systems never got off the ground. Cuiabá’s light rail system will serve a neighborhood targeted by the mayor’s real estate cronies. Rio’s BRT system will be only partially finished before the World Cup, connecting the international airport to booming, middle class Barra Tijuca but with no connection to downtown.

In 2007 the Brazilian government anticipated the world financial crisis by investing around USD 300 billion in a growth acceleration program (Programa de Aceleração do Crescimento), which aimed to subsidize construction and other industries to create 10 million new jobs. It is understandable, therefore, why Brazil would welcome the opportunity to finance the World Cup. Cup preparations have generated tens of thousands of jobs, but venue costs have gone three times over budget, with the total for stadiums and infrastructure now estimated at USD 11 billion. This is a lot of money but not unprecedented; construction for the 2007 Pan American games cost ten times more than the original estimate. Questions remain about how the World Cup money was spent, however.

Most or all of the stadiums that were financed by the federal development bank (BNDES) will be privatized. With privatization comes higher ticket prices, and the poor—the heart and soul of Brazilian soccer—are less and less able to afford attendance. This year, for example, some games in Rio’s 78,000-capacity Maracana stadium have had fewer than 2,000 spectators. At least Rio de Janeiro has first division soccer teams, however; the best team in Manaus, where a USD 300 million arena just mushroomed up for the World Cup, is in the 4th division. Although the governor has not yet produced a plan for stadium use after the Cup is over, citizens will spend the next 30 years paying back the loan to BNDES. There are similar doubts about future stadium use in Cuiabá, Brasília, and Natal.

When FIFA and government officials sold the idea of the World Cup to the Brazilian people they talked about its legacy. Although significant job generation cannot be ignored, this legacy appears to primarily be one of debt, gentrification, and neoliberal reorganization of the city. This brings us to the question asked over the past four years by the activists and academics of the network of People’s Cup Committees: “Who is the Cup for?”

Brian Mier is a member of the Fórum Nacional de Reforma Urbana’s executive secretariat. The FNRU is a network of Brazilian social movements, unions, NGOs, and professional and academic organizations that advocates the right to the city. Accomplishments of the FNRU include creating articles 182 and 183 of the Brazilian Constitution of 1988 and drafting the Statute of the City of 2001 that regulates these articles. He has lived in Brazil for 19 years.