Two Puerto Rican Congressional representatives embrace one of the most powerful African-American congressmen ever in a show of black-Latino unity.

This article is a joint publication of NACLA and edmorales.net. 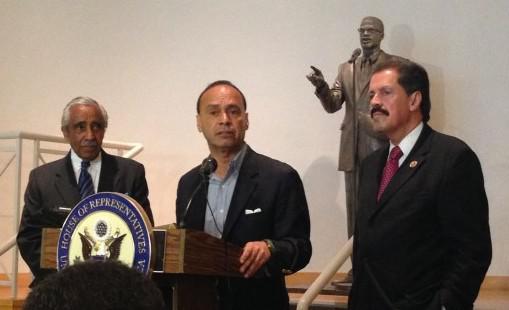 “Hablemos dos puertorriqueños aquí apoyando a Charlie Rangel,” said Luis Gutiérrez, standing with fellow US Representative José Serrano as they entered a press conference to announce their support for the ageless Rangel, who is facing a serious challenge to his Congressional seat in an upcoming June 24 Democratic Primary. The symbolism was palpable: two Puerto Rican Congressional representatives, standing together in a small space in Upper Manhattan designated as a memorial to Malcolm X at the site of his assassination in 1965, embracing one of the most powerful African-American congressmen ever in a show of black-Latino unity. Their mission: to prevent the end to Rangel’s extraordinary 44-year run in Congress by making the case that he continues to be an indispensable cog in the fight for immigration reform.

This strategy was apparently conceived because Rangel’s principal opponent, long-time State Senator and Assemblyman Adriano Espaillat, is trying to take advantage of re-drawn district lines to become the first US Representative born in the Dominican Republic, or of Dominican ancestry, for that matter. His natural constituency, drawn from the two major areas of Dominican population in New York, Washington Heights and the West Bronx, are either immigrants or children of immigrants, and also represent a new Latino force in a city long dominated by Puerto Rican politicians. But, as Gutiérrez insisted, the road to immigration reform demands coalition politics.

Gutiérrez, of course, has pursued many different kinds of political alliances to help bring about reform. He has worked with conservative Republican Latinos like Senator Marco Rubio and Representative Raúl Labrador, and even infamous Ayn Rand devotee Paul Ryan. His magnanimity in this effort is astounding, especially considering that much of the mainstream political press prefers to tout novices like Rubio and Labrador as “stars” while ignoring Gutiérrez’s extraordinarily charismatic 22-year Congressional career, never considering him as US Latino politics’ true national leader.

“We need 218 votes and I need someone that I can turn to and make sure I have their vote,” shouted Gutiérrez in a display of his singular combative oratory. “Every member of the Black Caucus voted for the Dream Act! They know that the majority that are going to benefit are Latinos but they do it whether they’re from Georgia or North and South Carolina. And they do it because they have the immense respect for the opinion of Charlie Rangel.” Serrano seconded that emotion, saying that Rangel played a key role in educating Congressional representatives on the issue.

Rangel—who is part Puerto Rican himself, but does not consider it an essential part of his identity—is game as ever, but looks weary. A two-year period of ethics investigations, which culminated in his stepping down from his chairmanship of the House and Ways Committee and his censure by the Ethics Committee in 2010, seems to have taken its toll. His remarks about Espaillat were limited to saying things like: “My opponent says he wants to be the Jackie Robinson of the Dominican people. That would be good if he were Jackie Robinson. But if you have no record, if you haven’t done anything except that you want to be Jackie Robinson…I really don’t intend to attack my legislative opponent because there’s absolutely nothing there to attack.”

Espaillat has not been shy about promoting his candidacy as a historic one for Dominicans, and in his 2012 race for State Senator against fellow Dominican Guillermo Linares (after losing to Rangel in the primary for US Representative), his campaign was accused of circulating a flyer that accused Linares of being a “traitor to Latinos” for previously endorsing Rangel. The re-drawing of the 13th Congressional District’s lines have favored his nationalist appeal by empowering Washington Heights, and the gentrification of Central Harlem has fragmented and diminished Rangel’s power base, one that produced a bloc of African-American politicians that has long held a strong sway on New York politics on a citywide, state and national level. Fittingly, the Malcolm X/Shabazz Memorial sits close to the border between the two constituencies.

Another problem for Rangel is Espaillat’s recent endorsement from the increasingly influential Working Families Party, which played a large role in electing new mayor Bill de Blasio, seen as a possible portent for left-liberal Democratic politics nationwide. Although the year began with testy conflicts between the more centrist governor Andrew Cuomo and de Blasio’s progressive agenda, Cuomo recently made concessions to the WFP platform in exchange for their ballot line endorsement. The deal was announced last weekend, shortly before the WFP announced its endorsement of Espaillat. Newly appointed City Council Speaker Melissa Mark-Viverito, a Puerto Rican native and second-progressive-in-command to de Blasio, had earlier announced her support for Espaillat.

When asked about this at the Malcolm X/Shabazz event, Rangel would only say that “I have to respect the decisions other people have made,” while reiterating that he won the endorsement of labor unions like 1199 and Teamsters Local 237. Espaillat has also attacked Rangel for allowing Upper Manhattan Empowerment Zone money to be funneled to “big box” stores that create low-paying jobs, and for voting to repeal the Glass-Steagall Act in 1999, which many have blamed for the outsized power of speculative finance capital. Rangel’s response is that the record shows he has created tens of thousands of jobs through UMEZ as well as bolster small businesses, and that he didn’t hear Espaillat objecting to the repeal of Glass Steagall back then. “My opponent wakes up one day and decides that Charlie Rangel is responsible for the economic crash,” he said in a WABC TV debate that will air on Sunday.

Although he has been decidedly liberal throughout his career, Rangel seems frustrated with the effects of de Blasio and the WFP’s efforts to move the debate to the left. Opponents like Espaillat are now emboldened to use more progressive challenges to Clinton-era political pragmatism, although they may have very well used the same platforms during their more under-the-radar terms in office. Incumbents have become increasingly under fire by challenges from what were once marginal stances on both the right and left. These political factors may transcend the racial and ethnic flash factors that seem to continue to drive New York City politics, such as the one pointed out in this NPR story suggesting that Puerto Ricans may be crucial swing voters in a race that seems to pit Dominicans against African Americans.

Still, there are fewer emotional issues on the political landscape today than immigration reform. Even though Dominicans don’t face the kind of relentless racism and discrimination in New York City that Mexicans and Central Americans face in other parts of the country, the right to citizenship and the protection against deportation is an enormously charged issue. Espaillat’s appeals to nationalism does not automatically guarantee him the support of all Dominicans, but he has now adopted progressive ideas that might appeal to a broader base. Still, Gutiérrez continues to insist that if Congress does not commit to legislation soon, he, Serrano, and Rangel will be on the front lines to push for a different kind of solution.

“We’re going to know in the next 30 days whether the Congress is going to act or not,” said Gutiérrez. “Charlie and I and José are very clear. In the absence of legislation, which we prefer, and a bill on the president’s desk, we’re gong to make sure that the President takes his pen, uses his executive powers, and frees us from the tyranny of our broken immigration system, from deporatations and separations of families.”

It would seem that if immigration reform is the central issue for Latinos, Rangel is better positioned to have an effect. But this notion is increasingly being questioned, and issues more related to wealth inequality and affordable housing may be becoming more important. Whatever the case, the Latino vote will be crucial, and the results may go a long way in deciding what’s really most important for this rapidly emerging political constituency.

Ed Morales is a freelance journalist and author of Living in Spanglish (St. Martin’s Press). He teaches at Columbia University’s Center for the Study of Ethnicity and Race.