Love and Activism: An interview with Ani Cordero

Nacla talked with musician Ani Cordero about her latest album, Recordar, and the relationship between music and politics in Latin America. 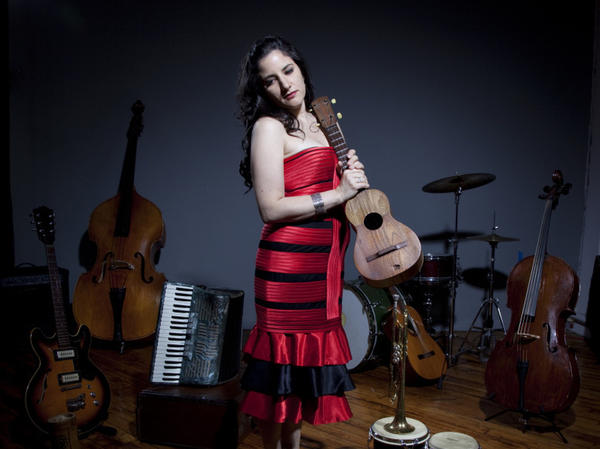 Read this interview in its original Spanish version below.

Ani Cordero is a Puerto Rican American composer, singer, and drummer. She was co-founder of Mexican rock band Pistolera and currently leads the bilingual music group Cordero. Ani has also collaborated with legendary Os Mutantes. Last week, Sebastian Muñoz-Najar sat down with Ani to talk about her latest album Recordar for NACLA.

NACLA: Your latest album Recordar is a journey through Latin American music from 1930-1970. It is a short trip but it revisits several classics such as "Macorina" by Alfonso Camín and Chavela Vargas and "Una canción mansa para mi pueblo bravo" by Alí Primera. At the same time, Recordar is a very personal work. What audience do you imagine discovering your record? Who do you want to introduce to Latin American music of this period with this album?

AC: This record has two objectives. The first one is to introduce people in the United States to Latin American music. However, in Latin America I have seen, for example, that in Puerto Rico they do not know Alí Primera, just like in Peru they may not know Danny Rivera. Then the second objective is that in each Latin American country, they get to know music from elsewhere in the region. Some people here in the United States are upset because they feel that the Latino label is used to put lots of different people in the same box. While that is true, with this record I want to express that Latinos also have a common experience, a shared political history, and that we can support each other.

NACLA: The album’s title is Recordar (remember); this could very well be an instruction to the listener of the album. What Latin America is evoked for you through the songs of Recordar?

AC: Since I am Puerto Rican, I speak Spanish, and I’ve known this music since I was little, what these songs evoke for me is a strong feeling, rather than a specific image. As a little girl I never gave much thought to what the lyrics said. I knew the history of Puerto Rico and the history of Atlanta, Georgia, but education in the United States did not include the history of Latin America. We were not taught history, but told a story. For example, the "Trail of Tears" was explained as if it had been a walk in the park.

Then in college I studied international relations with Juan Allende, nephew of Salvador Allende. College was a strong shock. I felt indignation to learn what had happened in the United States, Latin America, Europe, many places. I studied Latin America as a region without addressing the differences between countries. I saw the things that countries had in common: intervention by the U.S. government, weak democracies, and abuses by powerful people. But I also saw how people who, in other times, perhaps had not been interested in politics, organized because they reached the point where they could not live in peace. Because if you live with the fear that your child will not come home from school or your daughter will not return from her job, even if politics do not interest you, it becomes part of your life.

NACLA: You could have made an album dedicated exclusively to love songs or one dedicated only to protest songs. Why sing about love and protest on the same record?

AC: Because I'm very interested in maintaining that intersection between love and activism. For me, the important thing is the ability to see problems clearly while having the composure and space to try to fix them with love instead of anger. Sometimes anger is necessary, it is appropriate. Sometimes you cannot solve a problem without anger. But at the end of the day what I want is for every human being to have peace and share with their families and live a full life.

NACLA: Let's talk about some of the songs in Recordar. I would like you to tell me about "Canción Mansa para un Pueblo Bravo" Alí Primera. The song says:

Sometimes I think that our people

after the hope that is escaping him

but if we stop being stupid

this hope will become truth

Do you think this sentiment is valid in Venezuela today? How one might read the protests in Venezuela earlier this year from the lens of Alí Primera's music?

On Venezuela I would say it is not a situation where it is easy to identify the problem. I know they have implemented reforms that aim to help the country's poorest people. But in any country if we are to have a democracy it is necessary to share power, to have respect for society. That does not change. When we move out of that frame, and the power is concentrated in any direction, there will always be problems.

I chose this song because I am shy by nature. People are surprised that I am a singer and play large shows because I am modest and very private. But every year I try to take off a layer of fear. Now that I am getting old, I have to live with less caution about what I say and try to promote the things that really matter to me, even if these relate to difficult political issues in the United States and Latin America. This is the first song with a bad word in my career even if I still worry about what my grandmother would say. But the message is important and appropriate. My last name is Cordero (Lamb)—what could be more timid? I want to be a lion.

NACLA: In the song Choferito (Driver) you talk about your experience as an  Puerto Rican American in New York and about how returning to Puerto Rico feels.  What stories and melodies of Puerto Rico and its migrant community have inspired your music?

AC: Choferito is a type of song known as plena. The chorus of a plena is sung by everyone together, while every singer gets a verse. It is like in a rap battle where each participant writes a verse that can be as playful as one wants. I liked the song, but in the recording I had used language from the time when the U.S. laws and customs of segregation were in effect in Puerto Rico. The best way to deal with the song was to write my own verses. So I wrote a song about all Puerto Ricans who have left the island and perhaps cannot return or are only able to visit occasionally. It is about the love we have for the island and the indignation the things that happen there give us.

Puerto Rico seems to have gone back to the 80s when my grandmother would not let me leave the courtyard. The Puerto Rican economy is based on tourism. After the crisis, Americans could no longer afford to visit Puerto Rico. Also, since 1976 Puerto Rico had exempted firms from federal taxes, but that deal expired in 2006 and the economy fell into a recession. Since 2008, authorities have been trying to draw big companies in with new tax breaks. Instead of investing in their current citizens, they want to bring other people as clients.

NACLA: In other music projects you have expressed a clear pro-immigration position. How do you interpret from your point of view the humanitarian crisis on the border where more than 52,000 Central American children without adult companions have been detained since October?

AC: It's on the list of things that worry me every day. I've been looking to connect people seeking to help the children who are detained. I will soon start working with the Safe Passage Project of the Justice Action Center, which provides legal support to undocumented children crossing the border unaccompanied. Also, along with my friend Eileen Willis, who also played with me in Pistolera and now accompanies me in the Recordar concerts, we are looking for initiatives that may allow us to improve the living conditions of detention, and the speed and integrity of the process for these children. I do not have all the answers but am asking many questions as I try to connect people with good initiatives. The solution to this problem has to be a collective effort.

NACLA: What role can music play in raising awareness about this issue?

One of the proposals of this album is that it works as a platform to talk about the things that interest us. You are here because I made a record; we're talking about these issues because I sang these songs. That's how I can participate. Music creates the opportunity to discuss these issues.

But I also want to tell people that every day, try to solve a problem for someone no matter how small. All the little changes and small solutions add up to a better world.

NACLA: Ani, when can we hear Recordar live?

AC: There will be a free show at Lincoln Center Atrium on July 31. It is a show for the whole family, everyone is invited. The show will start at 7:30 p.m.