Conservatives in Uruguay Want to Put More Youth in Prison. Civil Society is Saying No.

The "No a la baja" campaign in Uruguay protests a new law coming to vote that would lower the age of criminal responsibility, unfairly pinpointing adolescents as the perpetrators of crime and insecurity. 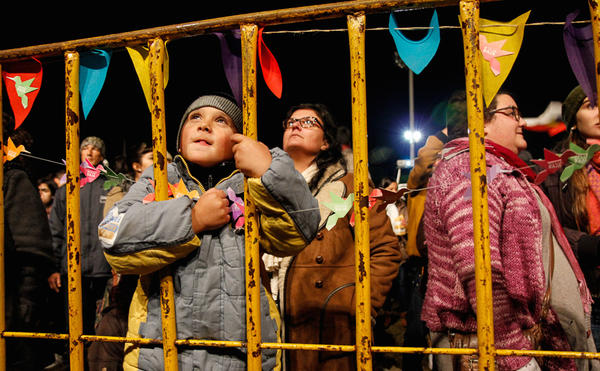 The paper birds say "No a la baja," and are the national symbol for the campaign (Lu Surroca / Creative Commons)

In early June, Uruguayans trekked to the polls to choose their candidates for October’s presidential election in a heated and frenzied primary. For weeks, the rambla (main avenue) and public squares in Montevideo had been a flurry of political activity with supporters disseminating information and encouraging citizens to vote for their candidates. When the dust settled, and the streets temporarily cleared of the passionate campaigners, three candidates, one from each major party emerged as the victor. In the days that followed, Tabaré Vázquez from the Frente Amplio, Luis LaCalle Pou from the National Party, and Pedro Bordaberry of the Colorados, all began to lay out their national vision for the general election. They described very different plans for the small Southern Cone nation, but each platforms, they listed security as one their central issues to address in the lead up for October.

Although current Uruguayan President José Mujica has been lauded around the world for his progressive social agenda, his domestic approval rating looms at around 52 percent with growing insecurity being the greatest source of criticism among his detractors.

Dating back almost three years, these opponents began to work on several efforts to counter the rise in robberies, chief among them being to lower the age of criminal responsibility in the country from 18 to 16 years. Under a new proposed law, courts could try anyone age 16 and older as an adult for crimes of homicide, assault, violent burglary, extortion, abduction, and rape, among others.

The law will now be decided by a popular referendum. The Commission to Promote Lowering the Age of Criminal Responsibility collected over 300,000 signatures in 2012, the amount required to send the law to a vote before the people. The electoral commission subsequently confirmed these signatures and set a vote to coincide with the presidential election in October 2014.

Referendums have a long and storied history in Uruguay as part of the nation’s strong democratic roots, where many public issues have been submitted to popular votes. The 1934 constitution introduced direct democracy, in which voters could voice their opinion on issues of national importance. The referendum process was revised and expanded in both 1942 and 1967. Since the nation’s return to democratic rule in 1985 until 2010, direct-democratic procedures were used 17 times in Uruguay, including the two referendums on the Expiry Law, or the Ley de Caducidad, which prevents investigation of Uruguayan officials for crimes committed during the 12-year dictatorship. This referendum on criminal responsibility is therefore only the most recent in a long line of Uruguayan campaigns to voice their opinions on pressing national issues.

Proponents of the law argue that with a rising crime rate in Uruguay, lowering the age of criminal responsibility will serve as a deterrent to potential violators. Politicians promoting the law frequently pair appearances with families of victims of violent crime to explain why they believe the law is important and provide a personal story behind their message. They also maintain that the National Code of Children and Adolescence states that criminal responsibility can be ascribed from the age of 13. While criminal responsibility for major crimes is the issue at stake, supporters make a case that this code sets precedence for lowering the accountability by two years.

Opponents, many working through the No a la baja (No to the Lowering) campaign, argue virulently against this position—a stance also triumphed by the Frente Amplio. Although security is a major concern in the nation, they show that adolescents commit only 7% of crimes in the country. They reason that linking the solution to social insecurity issues with lowering the age of criminal responsibility will actually not solve the problem. International advocates have also argued that the referendum contradicts international standards for the protection of children set forth in major international treaties, of which Uruguay is a signatory.

Instead, they maintain that rehabilitation programs are best suited to address Uruguay’s security issues. In 2010, Uruguay founded the Sistema de Responsabilidad Penal Adolescentes (SIRPA) that works to address delinquency in the country through work, rehabilitation, and education. Opponents of the new law argue that these programs more adequately address the nation’s concerns of dealing with delinquent adolescence without subjecting them to incarceration.

The No a la baja campaign is working hard around the country to mobilize against this law. Most poignantly, the movement stages rallies with music and performances to get the word out and is also conducting workshops to discuss the drawbacks to the law.

Recently, the human rights film festival, Tenemos Que Ver, contributed to these efforts by choosing children’s rights as the festival’s theme. Organizers of the event argued for collective responses to the problem of insecurity instead of targeting ‘youth’ as the social scapegoat. The festival aimed to allow attendees to listen, see, and feel from another perspective, that of childhood and adolescence “in all its forms,” to better understand the experience of minors instead of stigmatizing and punishing the group.

Even with all these efforts, the most recent poll by CIFRA shows that 58% of the population favors lowering the age of criminal responsibility, although those who are in favor or against differ substantially by party affiliation.

With the election still months away, the issue remains at the top of the campaigners’ concerns and is sure to be one of the major issues in the upcoming debates. One group who will not be weighing in though will be the youth themselves. Not allowed to vote until 18, it will be left up to the rest of the country to decide on whether to lower the age of criminal responsibility in the nation.

Debbie Sharnak is a PhD Candidate at the University of Wisconsin-Madison in History. She is currently a Fulbright Scholar in Uruguay.