Lifting the Sentence of Secrecy in Chile

Human rights activists in Chile demand the release of the remaining secret archives from the dictatorship. Forty years after the coup, the state is beginning to comply. 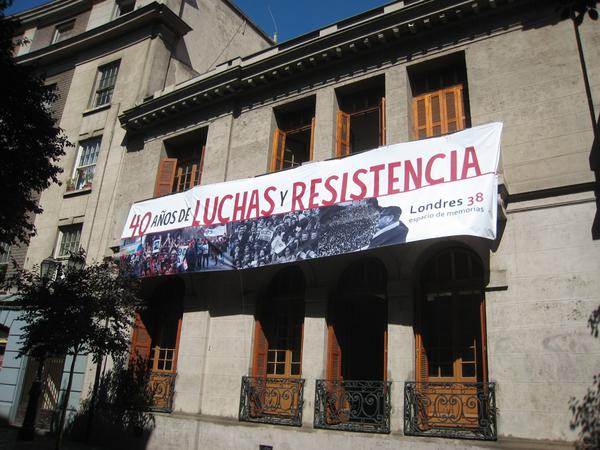 As the number of Chileans with direct memories of the Pinochet dictatorship dwindles, the country continues to face the question of how it commemorates and deals with the past. Like in other Latin American countries such as Argentina, Brazil, and Guatemala, archival issues form part of such debates, since whether or not state security files are made public affects what it is possible to know about past repressive regimes. Human rights organizations across Latin America have demanded that their governments open the files, using social media tools to network, raise awareness, and pressure authorities.

In 2014—40 years after the dictatorship and nearly 25 years since the first truth commission—a human rights collective called Londres 38 launched a campaign known as “No Más Archivos Secretos” (No More Secret Archives) to open up secret (hidden, non-public, denied) archives related to the Chilean dictatorship. The campaign has been bearing fruit, illustrating the intersections of physical and virtual spaces in a post-dictatorship society.

Londres 38 was a former detention, torture, and extermination center in central Santiago, but is now open to the public as a memorial for victims of the dictatorship, run by the human rights collective of the same name. One of Londres 38’s major tasks is to highlight the importance of free access to archives in the defense of human rights, and of civil rights in general. It has pushed to raise awareness of the existence of secret archives in Chile, putting pressure on the State to open these documents to the public.

There are three main groups of archives highlighted by Londres 38 as secret: first, those of Chile’s two official truth commissions, which judges ordered sealed for a period of 50 years; second, the archives of the German enclave Colonia Dignidad; and third, those of the armed forces, police and intelligence services.

In recent months, memory activists have made measurable progress in increasing transparency in post-dictatorship Chile. Londres 38 began its efforts with a traditional petition, both on paper and online. The group also went further, however, in using social media to spread its campaign under the Twitter hashtag #NoMásArchivosSecretos. Londres 38 originally used this hashtag to link its activities and publicize the petition, but other users began to pick it up when tweeting that they had added their names to the list. Chileans and global observers also used tweets to spread YouTube videos about the campaign.

On January 15, campaigners submitted 1,500 signatures to La Moneda, the presidential palace. Erika Hennings, president of Londres 38, said at the launch of the campaign, reported by El Ciudadano, “As a place of memory, from the start we thought about the necessity of lifting the sentence of secrecy to which these archives had been submitted. On the one hand, it is a breach of the right to information, as it is absolutely necessary for society as a whole to find out what happened, and, on the other, [the archives] are a very valuable resource for the legal investigations which end up in court.”

At the end of the month, families of the detained and former political prisoners of the detention centers Londres 38, José Domingo Cañas, and Villa Grimaldi formally requested that judge Jorge Zepeda, in charge of the investigation into Colonia Dignidad, release the documents found in the German enclave. In years past, Colonia Dignidad officials had kept files on members of the police and military, politicians, and the disappeared who passed through the site. The information was largely derived from public sources, such as newspapers, but also from informants; Colonia Dignidad archivist Gerd Seewald, who died in June at the age of 93, said that the archive was created at the order of colony leader Paul Schäfer, who “always wanted to be informed about the people around him.”

When Zepeda ordered the police raid on the site in 2005, officers seized around 40,000 documents, which he subsequently declared secret. Human rights groups suspected they could be key to discovering the whereabouts of some detained-disappeared people.

On April 7, in response to the memory activists’ campaign, judge Zepeda announced that the files would be turned over to the National Human Rights Institute (INDH) and the national defense council (Consejo de Defensa del Estado, CDE). Londres 38 stressed that unlimited access to the archive of the former Colonia Dignidad was necessary to find out the magnitude of crimes committed there. The judge also released a total of 407 files relating to persons who passed through the detention centers of Villa Grimaldi, Londres 38, José Domingo Cañas, and Venda Sexy.

Londres 38 activists, who made these initial files public and posted them on their website, pointed out that these files demonstrated what human rights organizations had been arguing for years: that there is still available information on people disappeared and executed by the dictatorship. While this represented major progress, Londres 38 activists insist that the files handed over were only a tiny part of the full archive.

The campaign to open the archives of Colonia Dignidad received a significant boost from the television program En la mira (Chilevisión), which gained access to the colony’s files and analyzed them in its July 9 episode “Las fichas del horror.” The program also took advantage of social networks by using the hashtag #LasFichasDelHorror, which was picked up by media and individual users. It explained the filing system in use at Colonia Dignidad, including the use of a letter “D” on a card to denote a disappeared person, and the discovery of the archives in concrete bunkers on the site. Subsequently, representatives of Chilevisión handed over more than 45,000 files to memory groups including Londres 38 and the Museo de la Memoria y los Derechos Humanos.

The Colonia Dignidad archive was not the year’s only success, however. In June, the General Comptroller agreed to an INDH request for access to the documents from the Valech II truth commission, giving the INDH the right to share its findings with the judiciary. The decision opens the way for future prosecutions of former Pinochet government officials.

Chile has made important strides when it comes to memorializing the recent past. The country’s Museo de la Memoria, for example, is an outstanding example of providing information about the dictatorship—entry is free, the building is open-plan and accessible, and it is frequented by school groups, private individuals, and tourists alike.

Both the museum and Londres 38 are concrete spaces of memory that people can visit and experience directly, and both sites are also involved in the development of digital archives to provide wide access to records and memory-related information. However, if Chile is truly committed to confronting its past, the Chilean state cannot keep the dictatorship’s archives secret.

Alexia Richardson is a translator based in Cologne, Germany, with an interest in Latin America, memory issues, visual culture, and human rights. She is the author of the blog Memory in Latin America. You can follow her on Twitter @Lillie_Langtry