The Crisis of Small-Scale Fishing in Latin America

Between state interests and large-scale extractive companies who freely exploit the sea, artisanal fishing communities are caught in territorial conflicts, with tremendous impacts on food security in the region. 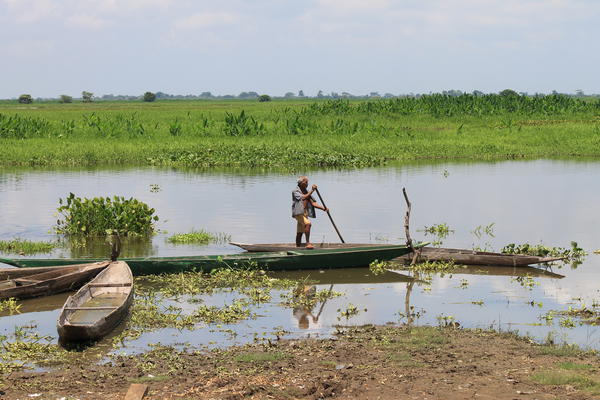 Fishing is a risky activity per se. Hurricanes, storms, and rough waters are a constant hazard for thousands of men and women whose livelihoods depend on the water. Yet political and economic forces on different levels currently present a more dramatic and far-reaching threat to small-scale fishing in the Global South. These forces constantly provoke territorial conflicts that make fishing water a politically and ecologically turbulent terrain upon which multiple interests and actors collide.

On January 27, 2014, artisanal fishers and residents of the Chilean city of Arica waved black flags and marched throughout the city. They were “mourning the sea” after the International Court of Justice (ICJ) in The Hague redrew the Chile-Peru maritime border. After six years of dispute between these two countries over their maritime boundaries, the ICJ ruled in favor of Peru and granted it about 21,000 square kilometers of ocean territory formerly claimed by Chile. The ICJ’s decision, however, was followed by political turmoil that made visible other problems artisanal fishers face today such as the monopoly of fishing companies, the scarcity of fish, and the precariousness of the labor conditions. As a result, the situation of Arica’s fishers has become illustrative of a broader crisis that also impairs artisanal fishing throughout Latin America.

For the fishers of Arica, the ICJ’s decision meant what many are referring to as the “death” of the sea, given that part of the maritime territory where hundreds of men and women subsisted for decades will no longer be available to them. Yet this geopolitical dispute was not the only cause of the general discontent in Arica. In an interview for Radio Universidad de Chile, Nelson Estrada, a member of Consejo Nacional de Defensa de la Pesca, pointed out that the real concern beyond the loss of maritime territory is the so called Ley Longueira—a recently approved law that favors the monopoly of large-scale fishing companies. According to Estrada, the fishing communities of Arica are subordinated to the monopoly and control of prices established by the Angelini Group—a very powerful company that also invests largely in mining, timber, and natural gas.

This type of conflict between artisanal fishers and large-scale fishing companies has provoked multiple protests well beyond Chile. In February 2014, artisanal fishers of Bahía Blanca, Argentina, denounced the critical effects of fishing trawlers—large commercial fishing vessels that drag nets through the water, known for disrupting the ecosystems on the ocean floor—on small-scale fisheries and the sustainability of fish fauna. The Argentinian state ruled in favor of artisanal fishers by revoking the license of two major fishing trawlers. Yet in doing so, the state unleashed a new strike on the part of local workers and unions whose livelihoods rely on the resource extraction of fishing trawlers.

The unbalanced and unfair competition between artisanal fishers and large-scale extractive companies is a part of a complex crisis in which the ecological sustainability of water is also at stake. The expansion of large-scale industries such as oil exploitation, for instance, is becoming a major source of water contamination in fishing territories. That is the case of the Argentine oil firm Pluspetrol, which is responsible for the contamination of rivers and the dramatic pollution of the Shanshacocha lake in the Peruvian Amazon.

Amazonian fishing waters in Peru are also suffering the environmental consequences of climate change, deforestation, and chemical contamination related to narcotrafficking. As a consequence of this, fish captures have decreased in almost 50% in the Peruvian Amazon. This situation is particularly alarming, considering the Amazonian region reports the highest inland capture fisheries yield in Latin America.

The expansion of large-scale industries in fishing territories and the ecological deterioration of water have triggered intense conflicts among industries, fishing communities, and the state. Fishers from the Bio Bio region in Southern Chile have fought a legal battle with Endesa—the largest electric utility company in the country. For the fishers of Bio Bio, the operations of Endesa in the area have caused considerable harm to marine ecosystems and ocean water. The Chilean state intervened and ruled in favor of the fishing communities. But local fishers still await redress for the socio-environmental crisis they experienced on account of Endesa.

The economic, political, and ecological crisis that artisanal fishers face today is aggravated when fishing territories become scenes of violence and fear. A number of grassroots organizations have publicized the disappearance, torture, and mistreatment of poor fishers on the part of U.S. warships in search of drugs and illegal immigrants in Ecuador. According to these denouncements, the international war on drugs and illegal immigration waged by the United States has extended to the oceanic territories, thus creating a situation of insecurity for many small-scale fishers. In an interview for Ecuadoradio, a fisherman recounted:

“While fishing, my ship was destroyed by a North American frigate. Their intention was to destroy my ship. They said they were authorized to thoroughly inspect my ship. After six hours of inspection and destruction, they found nothing that can implicate me as the owner of the ship... they destroyed my boat, and we were in Ecuadorian waters! … and they found nothing. Many fishers have lost their boats…[while others have disappeared]… mothers and widows are suffering… we claim justice.”

The reproduction of violence and fear in fishing territories has also been the consequence of geopolitical conflicts over maritime boundaries. In November 2012, the ICJ ruled in favor of Nicaragua, granting it about 75,000 square kilometers of sea formerly owned by Colombia. Since that time, small-scale fishers from the San Andrés and Providencia Archipelago in Colombia live in constant fear of trouble when fishing in some areas close to the new maritime border. According to some fishermen, Nicaraguan divers steal the nets and catch of Colombian fishers, and also create an environment of hostility and intimidation. As a consequence of this, some Colombian fishers have given up working in those areas fraught with fear and bewilderment.

Recognizing this multidimensional crisis that small-scale fishers face today in Latin America has implications for the way policy makers, activists, and academics understand the fishing sector. First, the crisis of fishing is usually depicted through figures and statistics that highlight declining captures and overfishing. A closer examination of the economic, political, and environmental forces that lie behind these numbers will provide a more critical and comprehensive analysis of the current state of world fisheries.

Second, advocates of a socioecologically-minded consumption of food usually see fish as an alternative to the “destructive” consumption of beef and chicken. Yet fishing has its own politics, which are also shaped by injustice, violence, and inequality.

And third, fishing is usually seen as an independent and self-contained economic activity. But water is intimately connected with land, which means that many fishing communities also grow crops and farm animals.

From this perspective, we can better examine the connections between the increasing pressure on aquatic resources and the deterioration of land rights, and the ways in which the crisis of fishing aggravates the problem of food sovereignty in rural areas of Latin America. This will provide a more nuanced understanding of the place of fishers in the transformation of agrarian societies, and a more critical approach to the political economy of fish and maritime resources.

This article has been amended to reflect the following correction: Artisanal fishers and residents marched in Arica, Chile, on January 27, 2014, not 2004.

Alejandro Camargo is a Ph.D. candidate in geography at Syracuse University, and an external researcher at the Colombian Institute of Anthropology and History. Email him at alejandro.camargo@gmail.com or follow at @camargh2o.