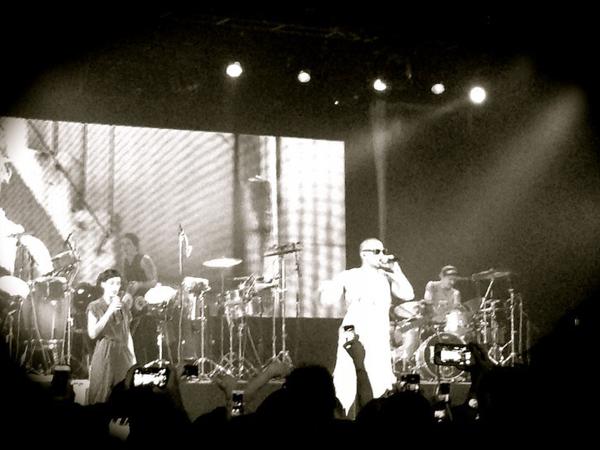 The sold-out crowd at Times Square's Best Buy Theatre last Saturday night could not control itself as their hero, René Pérez a/k/a MC Residente of Calle 13 took the stage with his typical buoyant boxing stance, ready to slay the dragon of indifference with lyrics spat and batucada attack. The backing band, now so well-rehearsed that its output astonishes, laid out the pulsing rhythms to "Fiesta de Locos" and "El Baile de los Pobres" in such a way as to signal the thundering might of Residente's message. The society of spectacle had produced at least one strobe-lit carnival that reserved to itself the promise of making personal and political meaning accessible to the relatively privileged masses.

The crowd was howling at this point. It was as if the tradition started at the end of Rubén Blades and Willie Colón's Plástico—in which the name of every Latin American country is chanted until the roll call reaches Nicaragua sin Somoza—had come full circle. For so many years the roll call of the nations had been used as a marketing aid by mainstream acts from Ricky Martin to Aventura, and now Residente was insisting again that each country should be identified with its particular struggle, and the crowd, with varying levels of commitment, was suddenly charged with a connection to actual events. A Puerto Rican political prisoner held for 30 years. A movement of indignados in Spain. A militant student protest in Chile.

And then the band launched into "El Aguante," a song that makes reference to a varied historical cast of tyrants and presidents, musical martyrs like John Lennon and Victor Jara, rhyming climate change with nuclear bomb-dropping (aguantamos las tormentas, los huracanes, el mal clima/aguantamos Nagasaki, aguantamos Hiroshima). The central message here being that with so much being imposed from above, we should all give ourselves a big pat on the back for withstanding centuries of violence done in the name of humanity and still keeping our sanity. All of this reminding us that as Calle 13 have thrown in their lot with a global notion of "people's solidarity," how sustainable is their improvised ideology?

Since their origins in the mid-2000s as quirky indie-hip hop cum alternative reggaetón crew, Calle 13 has capitalized on major-label success to bring their anti-hegemonic message very close to the Latin pop mainstream. Big winners at the Latin Grammys many times over, the trio consisting of MC Pérez, musical director Eduardo Cabra and singer Ileana Cabra continue to make music that defies convention as well as challenge the listener to push back against Latin American business as usual while providing U.S.-born Latinos a fragmented connection to several threads of national identities. Most significantly, Pérez uses his own disconnection from Latin American identity—the colonial status of Puerto Rico—to argue for both a virulent strain of cultural nationalism and a dissolution of borders in favor of social class alliances.

Once you grasp the energy of this Rosa Luxembourg plus Marcus Garvey party platform, the dancing and carousing make more sense, sambas and cumbias appear out of nowhere, with even a Fania trombone solo adding to the caterwauling momentum of the "pa' mi isla" classic La Perla. This night I could only quibble with the cautionary tale of "Adentro," which while rightly accusing of various gangsteros and reggaetoneros of faking the funk by adopting damagingly violent personas, almost blames the victim by failing to recognize that being street-hard, while essentially a buffalo stance of the underclass, is often a matter of survival. When René finished the song by tossing the pair of sunglasses he was wearing into the crowd, it was electric. But perhaps the messaging needed to kick back into its sandunguero/a roots—I began to hear drunken calls for "Se Vale To'" which I read to be a plea to return to the sexy fun of the band's first album.

Yet first, Residente paused to pay homage to Argentinean rocker Gustavo Cerati, who had passed away on Thursday after four years in a coma induced by a cerebral hemorrhage. While Cerati's band Soda Stereo was remarkably conventional and somewhat derivative of the British New Wave, his playful experimentalism and symbolic Latin Americanness inspired so many musicians like Pérez and Cabra, who wanted to translate their hybridized Spanglish essences into musical mediums embraced by the global youth subculture. Straight-up rock has also become more central to the Calle 13 aesthetic, beginning with the anthemic Calma Pueblo and this night climaxing with the title track of Multiviral, a track that features a fairly predictable Julian Assange lecture on the distorting dastardliness of the MSM (hint: not Miami Sound Machine).

As the evening gracefully careened towards its conclusion, the band wisely began to testify to the soulful nueva canción-ish passions that contain its deepest attractions. Residente made a playful series of jokes pretending to be alluding to a surprise appearance of Silvio Rodríguez, who appears on "Ojos Color Sol," by turning his head stage left several times, saying "Que pase Silvio Rodríguez!" Then the aforementioned "La Perla," with its graceful romanticization of San Juan's poorest barrio and Ileana adeptly singing the Rubén Blades part, and finally the transcendent "Latinoamérica," once again invoking the beautiful irony of a stone-cold Rican, plagued by a relentless colonial indoctrination, leading a swaying and hugging hymn and bringing us all together. The haunting chorus, delivered by Ileana, says it all:

Fans began tossing Ecuadorian flags, Argentine flags, Dominican flags onto the stage as Residente carefully draped them behind him. Everyone seemed to have answered the roll call, and no one needed to be first in line.

While there was no "Se Vale To'" on the set list, for the encore we did get a rousing rendition of "Atrévete Te Te," the song that defined Calle 13's messy idea of escaping Americanization by seizing it and turning its protocols into a message of resistance. It's at this conjuncture where the real solidarity is felt, from the Chileans who spilled beer on me to the Mexican couple who stomped on my foot while dancing a wild version of salsa. Salte de closet, implored René, and we all did, streaming out into the rain-soaked streets of the theater district, owning our transformative space in América.

Ed Morales is a freelance journalist and author of Living in Spanglish (St. Martin’s Press). He teaches at Columbia University’s Center for the Study of Ethnicity and Race, and is a NACLA contributing editor.