The Roundtable on Sustainable Palm Oil certification system may be masking the conflict and environmental degradation that remains at the core of the industry. 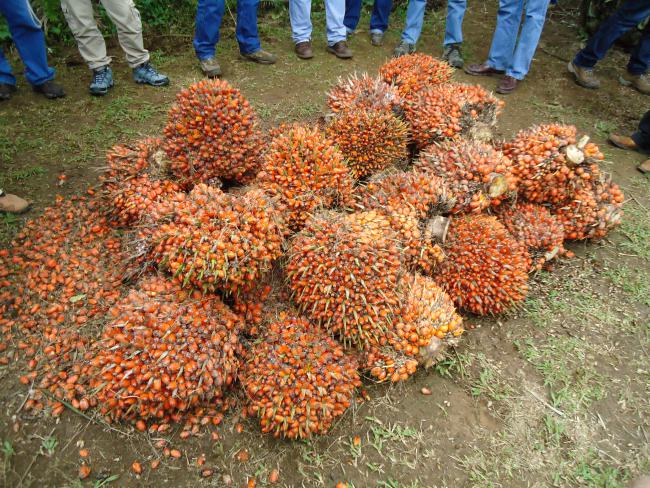 In many Latin American countries, the production of palm oil—a major ingredient in processed foods, cleaning products, make-up, and biodiesel—continues to be tied to the surging profits of companies at the expense of food sovereignty, territorial autonomy, and human rights of local communities. In an effort to curtail the negative effects brought on by the sector, industry actors are pushing the Roundtable on Sustainable Palm Oil (RSPO) and its certification framework as a viable solution. But given the national RSPO experiences in countries like Ecuador, it is clear that there is still much to be done in terms of upholding consultation processes, ensuring transparency, and managing plant disease if a truly sustainable industry is to be forged.

In September, hundreds of people attended the RSPO’s fifth Latin American Conference held in Antigua, Guatemala. Coming from various palm-oil producing countries in Latin America as well as Southeast Asia, attendees convened to discuss the future prospects of the palm oil industry. Business personnel, government representatives, and palm oil producers came together to learn about how the RSPO framework can be made a universal feature in the production processes of the region.

The RSPO—an initiative led by the World Wildlife Fund and Unilever—is part of an ever-expanding governance assemblage that seeks to put into motion production standards to address the environmental atrocities and risks that the industry has typically brought to Latin America and around the world through irresponsible cultivation, refining, and production practices. The ultimate goal of the RSPO is to deploy a labeling system to certify palm oil that is said to be free of any connection to industry-induced cases of human rights’ abuses, environmental contamination, land-grabbing, armed violence, and social conflict—events that unfortunately are an all too common part of the everyday politics of palm oil in Colombia, Ecuador, Honduras, Guatemala, and Mexico.

Globally, interest in RSPO certification is rapidly increasing with countries such as Thailand, Ghana, and the Solomon Islands initiating national interpretations of the global standards. Latin America is no different, with the National Palm Oil cultivators’ Associations of Colombia, Honduras, and Ecuador making significant efforts to shape national standards that are specific to individual country contexts. Future RSPO plans are also slated for Guatemala and Peru.

Despite RSPO’s increasing popularity, its top-down approach to resource governance within Latin America has rightly elicited major opposition, as this industry-led initiative is said to highlight the contradictions of green capitalism by placing a green veneer on company operations so business can proceed without miring company brands. These claims are not unfounded, as several RSPO-member companies in Indonesia—a country where RSPO standards have existed for 10 years—have been publicly denounced by Greenpeace and other organizations for carrying on their destructive behaviors and violating RSPO rules within their production networks even after receiving RSPO certification. The RSPO’s Principles and Criteria have also been harshly critiqued by actors who largely agree that the guidelines contain major gaps when it comes to establishing meaningful reforms in the industry.

The RSPO and its governing regime have major implications for Latin American countries like Ecuador whose government is looking to intensify domestic production and increase global exports of the country’s palm oil sector. Ecuador is Latin American’s second largest palm oil producer behind Colombia. According to ANCUPA, the National Palm Oil Cultivator’s Association of the country, there are a total of 280 thousand hectares of palm currently under cultivation. The industry directly and indirectly provides employment for approximately 150 thousand workers and out of this number, about 7 thousand people are palm growers. 87% of palm growers are considered small producers who own less than 50 hectares of land.

Given the importance of the industry as a source of employment, it is no surprise that the Ministry of Agriculture, Cattle, Aquaculture, and Fisheries (MAGAP) and the ministry of Foreign Trade together with the Corporation of Promotion of Ecuadorian Exports (CORPEI) recently launched a country-wide plan to bolster national consumption of palm oil as well as international exports in order to drive up competitive profits. With projections of palm oil production set to jump over the next few years, discussions on how to socially and environmentally improve the industry— notably absent up until this point—become extremely important.

In 2013, ANCUPA launched Ecuador’s national interpretation of the RSPO’s governing principles and criteria—with exclusionary and problematic results. Over the course of a 60-day “public consultation” period, members of civil society organizations, government ministries, palm oil companies along with palm oil growers were expected to review the proposed industry standards and provide feedback on their clarity and effectiveness. The features of the process were extremely uneven, as only a little more than 20 people participated in the supposed consultation, many of whom were ANCUPA members and not part of local indigenous or Afro-Ecuadorian communities affected by palm plantation expansion. And commentary could only be given by inputting personal identification information into an online system. Currently, the consultation results are being examined by ANCUPA for ultimate delivery to and approval by the RSPO’s global executive committee.

A brief review of RSPO activities in Ecuador raises more doubt than certainty about whether the palm oil industry can be improved. As the RSPO becomes more institutionalized within the environmental governance structure of Ecuador, greater attention must be allocated to the specific social, political, and environmental geographies of the country. First, given the RSPO’s purported emphasis on a “consultation” process when it comes to identifying environmental impacts, major changes must be made to promote inclusive knowledge production and exchange within this forum, otherwise the RSPO significantly risks repeating and reinforcing the power asymmetries already inherent to the palm oil production system. This is particularly important in a country context like Ecuador where debates over consultation and consent in relation to renewable and non-renewable resources have been highly charged for some time.

Second, the Ecuadorian interpretation of the Principles and Criteria must include company policies regarding the transparency of finances and investment records. Currently, transparency is emphasized in connection to land titles, impact assessments, and grievances. Given the porousness of the Ecuador-Colombia frontier and links between plantation operations and narcotrafficking money-laundering schemes in both countries, any mechanism of sustainable certification must include requirements on this issue.

Finally, the RSPO has little to say about the governance of disease affecting palm plantations and inevitably the livelihoods of thousands of palm growers. In recent years, pudrición del cogollo (PC) or bud rot disease, has wiped out thousands of hectares of palm across Latin America. In Ecuador, it is estimated that 5% of the country’s total palm oil trees have been killed due to the spread of PC. As the disease has the potential to affect entire plantations, thus driving up conflict, the RSPO’s Principles and Criteria must endorse practices that contain and slow down the spread of PC—even if this comes at the cost of stopping the expansion of the palm oil frontier entirely.

Adrienne Johnson is a PhD candidate at the Graduate School of Geography, Clark University. She is also a member of the Land Deal Politics Initiative research network. Email her at adriennjohnson12@gmail.com or follow her research here.