Escaping Economic Orthodoxy in Latin America: “I think on the whole the departure has been a success.” 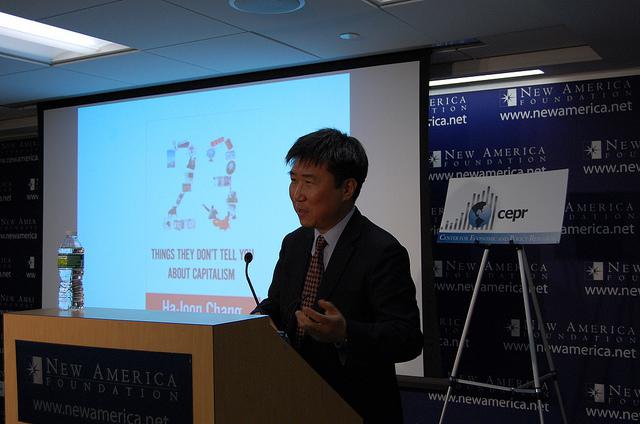 Ha-Joon Chang is one of the world’s best-known and most influential economists. A native of South Korea, he is the author of a series of international best-selling books that have inspired a new generation to rethink economics by challenging economic orthodoxy. Last year, Chang was voted one of the top 10 world thinkers by readers of the U.K.-based Prospect magazine. His books, including Bad Samaritans: The Myth of Free Trade and the Secret History of Capitalism, and 23 Things They Don’t Teach You About Capitalism, have been translated into dozens of languages. He has also advised numerous U.N. agencies, institutions, corporations, NGOs, and governments on economic policy. Chang teaches economics at Cambridge University in England. NACLA’s Dan Beeton recently caught up with him in Washington, D.C. when Chang was promoting his latest book, Economics: The User’s Guide (Bloomsbury).

Dan Beeton: The so-called “pink tide” of left-leaning governments that have emerged in Latin America over the past 15 years have often pursued economic policies that go against the so-called Washington Consensus neoliberal policies of reduced social spending, privatization, trade liberalization and so on. How would you characterize these countries’ progress? Do you think there are success stories here that other countries might want to ponder?

Ha-Joon Chang: In the 80s and 90s, all the Latin American countries followed the Washington Consensus policy and throughout those decades Latin America hardly grew at all—despite all the promises that if you follow these policies you’ll grow fast and foreigners will invest. Those promises haven’t been kept and a lot of countries got disillusioned, and from the late ‘90s to early 2000s started electing governments that departed from the Washington Consensus policies.

Now, the degree of departure varied across countries. At one extreme you have countries like Chile or Colombia, which basically still follow the neoliberal policies but did small things to modify the worst features by, for example, introducing some degree of capital control, and expanding some social policies. At the other extreme, you have Venezuela, which basically tried to find its own model, although not necessarily successfully. But in the middle we have countries ranging from Brazil to Bolivia that are trying different things, but even within the spectrum. Brazil while doing a lot of non-orthodox things, more or less maintains the orthodox version when it comes to macroeconomic policy. But in terms of social policy and industrial policy, in the last decade it has significantly departed from the Washington Consensus.

That’s right. At the other end of the spectrum, you can talk about countries like Bolivia, Argentina, Ecuador which did more radical things to change. I think on the whole the departure has been a success. Of course you cannot attribute the growth acceleration entirely to policy changes, because a lot of it was thanks to a commodity boom due to China’s super-growth. But there were clear results in other areas, like social policy, conditional cash transfers. I have some problem with those, but still, for the first time in probably five centuries, income inequality has fallen in Brazil—although only slightly—and I think you have to give credit to these policy changes.  And having seen some results here, these countries are pushing in the non-orthodox direction even more. Chile’s now got significant left-wing presence in politics; even Colombia’s kind of moving away from the standard right-wing tradition; Argentina, thanks to its struggle with the vulture funds, has to do things differently; Ecuador and Uruguay have been slowly but surely moving further and further away from the Washington Consensus.

I think the next decade will see even more departure from these policies. But at one level I’m concerned because, basically, this Chinese commodity boom has meant that these countries could grow quite quickly without upgrading their production structures. They know they have to upgrade and start doing difficult things, but the pull is too strong. If you look at the actual structures, Ecuador is still very, very dependent on oil; Brazil’s dependence on commodities has probably increased. So they have to face the fact that this commodities boom is not going to last forever. Even if it did last for a significant period, unless you use the proceeds from the commodity exports during that period to build your manufacturing base, when it finally ends after – I don’t know – 20 years or whatever, you’ll have no engine of growth for the future.

So they need to find new markets?

Yeah, new markets, but where? Other potential new markets are also countries dependent on primary commodities, so they need to begin to think about new things to produce. Some countries lack the capabilities to do so, but there are some Latin American countries where they have very well-trained scientists and engineers and could develop new activities. Unfortunately, there’s too much ideological obsession that governments shouldn’t do too much industrial policy, while the political power of commodity interest is too strong. Commodity producers really do not want industrial development in the same way that Southern plantation owners didn’t want it in America in the 19th Century. So, this isn’t going to be easy, but that’s what they have to do.

The BRICS recently announced they would create new institutions: the Contingent Reserve Arrangement, and the New Development Bank. This has elicited much commentary and analysis, with some economists suggesting that these new institutions could offer important alternatives to the IMF and World Bank, which routinely condition lending on the adoption of neoliberal economic policies. Do you share this assessment? How significant do you think these institutions may be?

Well [that] depends on how much money’s there. In the end, money’s what makes those institutions like the World Bank and IMF powerful. Of course, it’s not just that they’re owed money; they’re even more powerful than the money they have because the powerful countries that control these organizations will add money only if the IMF gives its seal of approval. So it’s not just money—it’s also soft power.

A BRICS bank may have an equal amount of money as the World Bank, but if the other potential public and private funders do not agree with its assessment, its power will be weaker than that of the World Bank. In general, yes, having more alternatives gives weaker countries more bargaining power. In the ‘80s and ‘90s, countries in Latin America and Africa had to listen to the IMF and World Bank because they were the only banks in town, so to speak. Now there’s another bank called “China”; there might be another bank called “BRICS.” If you have alternatives, you can play them against each other and get better terms. I think this way at least some African countries have already benefitted from the presence of China—if not the forthcoming BRICS bank—because the Chinese, when they lend money, they don’t put all those conditions that the World Bank and the IMF place on their loans.

So, yes, I think on the whole it’s a good thing. How important they will be depends on two things: A) How much money they have, and B) how much ideological influence they’ll have on the rest of the world. That will be a slow process because the financial world is so dominated by the Anglo-American money logic. But even there, some private sector investors are smart enough to know that these orthodox policies do not necessarily produce growth. So they figure out that maybe this BRICS bank is going to do will make the borrowing country grow faster.  It’s not a completely one-sided game, but the market ideologies are so strong that it’s going to be some time before the BRICS bank will have the influence that is commensurate to its financial power.

There has been a lot of news and commentary over Argentina’s battle with vulture fund debt holdouts, and a U.S. court’s ruling in favor of the vulture funds. Do you think Argentina has pursued a wise course, economically, by first defaulting on its debt, in 2002, and continuing to stand up to the vulture funds?

Well, I really hope it keeps fighting, because it’s really making people reassess the nature of the global financial system. The ideal scenario would be that this makes countries agree that we need to introduce some kind of international bankruptcy law. Because in domestic bankruptcy, the exact proportion differs across countries, but typically if 75% to 80% of the creditors agree to have a haircut, then the remaining 20% or 25% have to accept it. They cannot sue the company later. But in the international case, there’s no such law, which is what allows these vulture funds to play this game.

So [economist] Mark [Weisbrot] was saying that–because it’s not realistic to talk about getting the international bankruptcy law—now countries will want to issue sovereign bonds in countries like Belgium or Britain where that kind of thing wouldn’t be allowed. This has become such a scandal that even Martin Wolf of the Financial Times is now on the side of the Argentinians. So yes, it’s tough for Argentina, but they have to fight this for the rest of the world.

In your latest book, Economics: The User’s Guide, you proclaim that there is no “right” way to do economics, that no school of economic thought has all the answers – and you systematically describe the strong points and shortcomings of each major school of economic thought. Are we witnessing a new era, where this idea is becoming more widely accepted, perhaps as in Latin America? Do you talk to economic policy makers who are deliberately taking ideas that work from different schools and applying them in practice?

Yeah, you know of course some policy makers, especially the ones you found in many Latin American countries in the 1990s were totally driven by ideology – the same story as some of the Korean policy makers in the late ‘80s and early ‘90s. On the other hand, many policy makers are very pragmatic. They’ll do whatever policy they think is right without really bothering about whether the idea came from Keynes, or Marx, or Adam Smith. So in that sense we actually have more hope with policy makers because professional economists are hide-bound by their ideology. Many of them would not accept some argument not because they didn’t agree but because it doesn’t fit into their ideology. Policy makers are less like that, so we have more hope with them.

Indeed, Latin America itself has great intellectual traditions in economics – the Latin American structuralist school, dependency theory even. Especially if you go to countries like Brazil you have people doing research with many different theoretical heritages. Brazil has lots of post-Keynesians. At the moment the BNDES is run by these academic industrial economists who are influenced by Schumpeter and the Latin American structuralist school. So they think very differently.

In that sense, the region doesn’t lack those alternative traditions to draw from, and this in a way is why I am predicting the region will move further and further away from the Washington Consensus, because they can generate their own, new economic ideas. Of course, subject to the political configurations, subject to external conditions – I’m not saying this is totally predictable. But having seen the development of some of these orthodox policies, they can now kind of push forward much. Of course, it depends on the country. Some countries do not have enough people with this kind of economic background, but one thing that the Latin Americans are good at is continental solidarity. So I’m sure they can help each other, with countries like Brazil and Argentina lending some economists to help Paraguay, or wherever those capacities are lacking.