Until You Change: “Dehomosexualization” the Ecuadorian Way

Ecuador's Ministry of Health is struggling to close or regulate hundreds of private rehabilitation centers, some of which profit from offering "dehomosexualization." 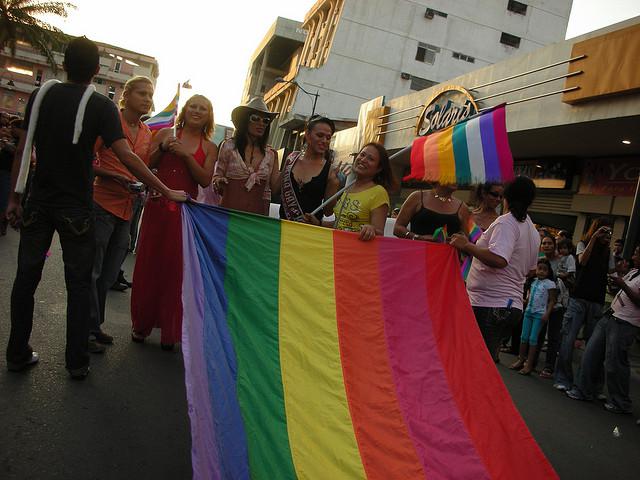 Over dinner, just steps from where Ecuador meets the Pacific Ocean, Jorge told me about his ordeal as a transgender man in a nearby private rehabilitation clinic. Held up against a wall by his neck and repeatedly struck in the face. Forced to wear sexy feminine clothing, read Bible passages every day, and follow a bastardized version of the “12 Steps” borrowed from Narcotics Anonymous. Not allowed to associate with or communicate with his girlfriend, who was interned against her will in the same clinic several months earlier after her mother found her with Jorge. And forbidden to leave, at least “until you change”. This is what the “therapists” told Jorge –not long before I met him— during his stay at a private drug and alcohol rehabilitation center several years ago.

Jorge spent seven long months enduring these coercive tactics to “fix” his “misguided” gender and sexuality. He wasn’t supposed to be a man, and he wasn’t supposed to be attracted to women. The clinic promised his family that the behavior modification program they offered could fix this “conduct disorder” –a diagnosis without any medical standing that can describe just about anything and frequently stands-in for homosexuality or gender transgressions. Local activists call these centers’ practices “dehomosexualization,” which perhaps implies a more purposeful, organized, and cohesive phenomenon than it really is, though the term gets at the heart of its intent. Many parents and families—like the clinics they approach—continue to understand homosexuality as an addiction, a sexual disorder, or temporary rebellion. Through ignorance, desperation, or both, they believe forced separation from their partners or peer group and exposure to some “hard discipline” can provide a cure.

With scores of allegations of abuse each year originating among its more than 200 loosely regulated private rehabilitation centers, Ecuador has a major problem on its hands. The first few private rehabilitation centers emerged in the country beginning in the 1970s, several decades before any regulatory body existed to oversee them. They expanded to fill a void left by an absent state whose public health spending was gutted in the march towards neoliberalism during the 1990s, just when the country began facing growing drug problems. More residential rehab centers started opening in the 1980s and 1990s and their numbers have quickly mushroomed over the last 15 years as they proliferated to every province in the country.

Generally the theory of change employed by Ecuador’s offending rehab centers is a militaristic system of punishments administered “until you change,” that is, a model of coercion. The tactics vary, but this genre of treatment in the centers has come to be casually known as “garroterapia,” roughly “therapy by the stick.” And the centers in which such practices take place have been dubbed “Nazi clinics.”

Decentralized and mostly unaffiliated with each other, they do not follow a common program or specific standards of care or belong to professional associations. Most of them adopted the use of Narcotics Anonymous and Alcoholics Anonymous as their primary or only treatment model (a program never intended for a residential facility or for application within an institutional system). Training and credentialing of staff and centers are haphazard. Most operate almost completely devoid of adequately qualified professionals. In fact, a majority are run by ex-substance abusers themselves, who exited other rehab centers partially recovered with little to no employment prospects, and saw opportunities for work and sometimes personal fulfillment in opening centers of their own. There they implement what they learned during their own recuperation with a nearly total lack of oversight or accountability.

So-called “vivenciales” provide peer therapy and support, but most of them have also recently graduated from other centers, lack any other experience or training, and possibly continue to struggle with unresolved mental health or substance abuse issues. Yet they are given tremendous authority over other residents and often inflict the same methods of violent or punitive treatment they received when interned themselves.

Until recent years, violent, brutal, and illegal practices directed at clients have gone on with total impunity at many of these centers. In their most extreme forms this includes the use of restraints, tranquilizers, beatings, withholding food, solitary confinement, water bucketing, and other forms of degrading treatment.

Detailed regulations governing these institutions are regularly updated by the Ministry of Health and often posted in clinic offices, but in practice their enforcement has been nearly absent. Many of these centers function more like organized crime networks or extra-legal private incarceration systems designed to coerce normative behavior by brute force than like rehab centers. A great many are motivated by profit-seeking. In some cases, even multiple attempts by Ministry of Health officials to shut down the worst offenders have been thwarted when clinics simply reopened their doors in the same facility or a nearby location.

Unfortunately, this lack of enforced regulation and rewarded opportunism has created the conditions for high levels of abuse in these private rehabilitation centers. Even though the situation has persisted over the past several decades, the rapid expansion of Ecuador’s rogue rehab centers was not widely publicized until the last 10 to 15 years when some of them began interning lesbian, transgender, and gay individuals specifically to “treat” their non-conforming sexualities or genders. Having built a winning business model around the unregulated and unsupervised mistreatment of substance abusers in the 1990s, at the turn of the 21st Century these clinics were ripe for expansion, both in number and in mandate. If they could cure alcoholism or a drug addiction, some center staff claimed, why not homosexuality? For a fee of course...

This is how gays, lesbians, and trans persons end up in these rehab centers: most are taken—tricked, drugged, or dragged against their will—by family members who hope to "cure" or "change" their homosexuality or gender transgressions. Many families are so desperate to do so that they are willing to pay more than $500 a month to accomplish this goal. Interning a gay, lesbian, or trans* family member in a locked-down rehab clinic has the added bonus of separating their relative from their same-sex partner and forcibly cutting off contact.

Some clinics have learned that widespread homophobia can be taken advantage of for financial gain--that is, it’s good business. In the dozens of centers I investigated across the country, 60-100% of residents were being held against their will. Many of them—and nearly all of the LGBT residents whose stories I collected—were “abducted,” often violently, by family members or clinic staff to get them there—another technically illegal practice performed regularly with impunity. Once there, gay, lesbian, and trans* persons face the same abuses in the clinics as do their straight peers, the vast majority of whom are interned for substance abuse.

Though there are no documented cases of explicit treatment of sexuality in these centers until the late 1990s, “dehomosexualization” is the cherry on top of a long history of institutional abuse. However, being abducted, forcibly interned, and mistreated in order to force one to change her or his deeply held gender identity or sexual orientation is a violation of one’s dignity of another order—one with grave psychological consequences. There are many cases—at least 30 public documented complaints—of gay men, lesbian women, transmen and transwomen who have been subjected to forced internment and “dehomosexualization” attempts against their will. LGBT advocacy organizations in Ecuador suggest that there may be in reality 30 cases or more per year.

How can this possibly be legal, you might be asking yourself? It’s not, but the Ecuadorian state has been long absent from enforcing existing regulations in these spaces and is only now trying to get a grip on its now notorious rehab centers. Largely spurred on by local activists drawing attention to the issue of the internment of LGBT people in these centers, the Ecuadorian government has repeatedly announced redoubled efforts to end these practices. After another high-profile case in 2013 involving the forced internment of a young lesbian woman by her parents, the Ministry of Health promised to better regulate the country’s out-of-control rehab center problem and shut down offending clinics. Nevertheless, definitive state action thus far has been largely limited by intractable delays and a continued inability to reign in rogue clinics. Meanwhile, forcible conversion therapy efforts likely continue with impunity in dozens of Ecuador’s private and often isolated rehab centers.

In 2011, the issue created an international media storm following a Change.org petition demanding the closure of such clinics. At the time, Ecuador’s offending rehab centers were widely erroneously reported as “ex-gay” clinics affiliated with or run by “ex-gay” organizations, distinct enactors and promoters of sexual orientation change efforts that have a distinct presence in the country. Unlike ex-gay ministries, the rehab centers that practice some form of sexual orientation change efforts do not represent a centrally organized effort or a cohesive ideological movement, but rather exist as a loosely networked form of opportunistic exploitation. They are not deliberate or purposeful in their deployment of conversion therapy like ex-gay ministries; rather, they simply apply the same methods to “homosexuals” that they use for substance abusers, in which they are equally untrained.

This does not mean the two are entirely unrelated: both the offending rehab centers and the ex-gay movement share a conception of homosexuality as a behavior that can and should be changed. This is the underlying assumption—internalized by rehab center directors and staff, clients’ families, and sometimes clients themselves—that continues to fuel the practice and proliferation of sexual orientation change efforts and the presence of gay, lesbian, and trans* persons in Ecuador’s rehab centers. No other entity is as active and successful at spreading the message that “change is possible” as the ex-gay movement. Thus, while ex-gay ministries may explicitly condemn and distance themselves from the violent tactics and forced confinement as practiced by some of Ecuador’s rehab clinics, the transnational ex-gay movement still plays an important role in promoting the underlying premise that enables these practices; that is, the idea that homosexuality can—and by implication, should—be changed.

The problem of coercive sexual orientation change efforts in rehab clinics is a serious human rights problem in Ecuador and the response should include stricter regulations that are actually enforced. In its attempts to tackle the problem, the Ministry of Health claims to have closed more than 100 private rehabilitation centers so far that do not meet regulatory standards or that have incurred infractions. The Ministry has announced plans to open its own public rehabilitation centers in every province of the country by the end of this year. But many of those who have been working on this issue for years remain concerned that this step, while improving conditions for all clients, does not address the underlying problem of widespread societal homophobia. This approach only treats the supply side of the problem. There must also be attention focused on the demand side of the problem. The deliberate diffusion of the argument that homosexuality can and should change, spread in public discourse by the ex-gay movement and its supporting religious institutions (including in the United States) fuels and supports the continuation and perceived legitimacy of sexual orientation change efforts, whether they take place in ex-gay ministries, churches, psychologists’ offices, or rehab centers.

But it doesn’t work. Jorge himself put it best: “I will never change.”