Change is Possible: Sexual Conversions and Imperial Aspirations in the Americas

Exodus Global Alliance is helping to spread the “ex-gay” movement across Latin America, but not without resistance from activists and lawmakers. 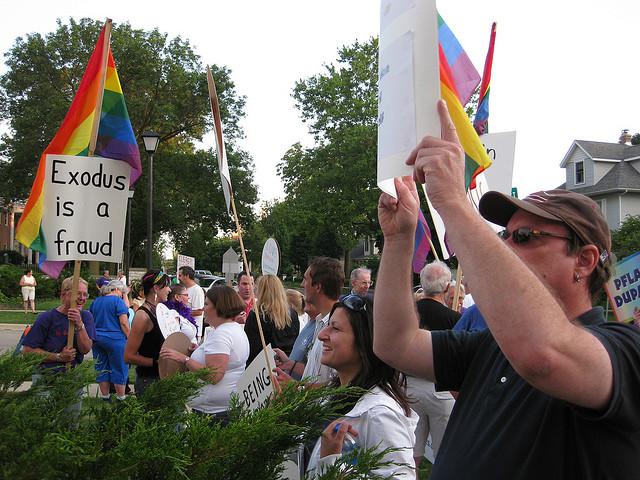 “Out with you! Out with you, Devil!” the two women across from me fervidly chanted in unison at a 2012 national ex-gay conference. Hand in hand in a circle of 20 people praying out loud with increasing intensity, they directed their orders at the devil that allegedly possessed the queer activists protesting outside. Five minutes earlier, the American missionary who inspired their efforts 15 years ago burst in with an announcement, interrupting one young man’s testimony about how he had ‘been made homosexual’ and how he had overcome it. “Don’t panic but there are activists protesting outside,” she said. “This has happened at our conferences in Brazil and Argentina. We knew it was only a matter of time that the gay agenda would find us here too. Let us pray for their souls...”

In spaces like these across Latin America, ex-gay ministries convene to discuss, build capacity, and strategize on how to counter the gay agenda they believe is spreading across the region, spurred on by American activists’ organizing and U.S. government funding for “gay rights.” Ironically, the same ex-gay movement—of American origin itself—is actively organizing across the region to develop strategies to counter this trend, among them the continuation of the belief and practice upon which it was founded: that “change is possible.” Its member ministries offer what some have dubbed “sexual orientation change efforts (SOCE),” often referred to as “conversion therapy,” and found in a variety of manifestations throughout the region. This expanding transnational ex-gay movement promotes the message that gay, lesbian, bisexual, and trans* persons can “change.”

When it comes to influencing both social attitudes and national politics involving gender and sexuality, the expanding transnational ex-gay movement is among the quietest and most influential in Latin America. This loose and decentralized movement—now a multi-million dollar international conglomeration of interrelated institutions—shares the common belief that same-sex attraction can be overcome. The ex-gay movement began with the creation of Exodus in 1973 in the United States, the same year that homosexuality was removed from the DSM-IV—not so much a coincidence as an indication of the increasing attention devoted to sexual orientation in the public realm at this time. Eventually, the organization split into Exodus International (now defunct) covering the United States, and Exodus Global Alliance, an umbrella organization for all Exodus affiliate ministries around the world.

Exodus’ motto is "Change is Possible," and for decades the organization and its affiliates have disseminated the idea that homosexuality can (and by implication, should) be changed. Today, the ex-gay movement comprises hundreds of affiliated ministries and regional offices, a growing roster of conferences, a collection of books and other publications, and well-known public figures who regularly circulate and present at conferences and events.

Most ex-gay ministries approach their clientele with great compassion. The stated goal of their therapy is not necessarily to produce a converted “heterosexual,” but rather to help the client to stop a sinful and destructive behavior—if heterosexuality is not possible, then celibacy is seen as the better alternative. Those who wish to try to change their same sex attractions approach these ministries to voluntarily seek guidance and counseling services. There is no residential component, and clients are only accepted by their own free will, though many are ushered to the ministries by concerned family members. Typically, clients attend individual counseling sessions where they make attempts to understand and overcome the root causes of their homosexuality or “sexual brokenness,” and may also count on weekly support group meetings to help them maintain their “freedom from homosexuality.” These efforts follow a flexible but somewhat standardized program and literature developed predominantly by or in affiliation with Exodus, the ex-gay movement’s main evangelical branch, or perhaps Courage, its Catholic wing.

Mainstream psychological and psychiatric practitioners around the world have mostly abandoned these once common but now discredited beliefs and practices, and professional organizations (like the American Medical Association, the American Psychological Association, American Psychiatric Association, etc.) have taken strong stances against attempts to change clients’ sexual orientation, citing a near zero success rate as well as associated risks of inciting depression, low self-esteem, post-traumatic stress disorder, anxiety, substance abuse, and suicidal thoughts and attempts. Some lawmakers have even begun banning such practices. For example, in 2012, California passed a groundbreaking ban on practitioners licensed in California engaging in conversion therapy with minors. This was the first legislation of its kind in the US, and New Jersey followed soon after. Both laws were upheld after thwarting appeals. In early 2015, a New Jersey judge took it a step further, ruling that the promotion or advertising of sexual orientation change services of any kind constitutes consumer fraud. In Latin America, too, such measures are gaining momentum. In one example, Argentina’s National Mental Health Law explicitly prohibits the treatment of homosexuality as a disease.

Yet, despite the emergence of recent legal challenges and the long established opposition from mainstream psychology and medicine, conversion therapy continues to be practiced in a variety of forms and spaces, promoted above all by the religiously motivated and conservative ex-gay movement. While the tide is turning in the United States—the origin of the ex-gay movement, where it faces major legal challenges, strong counter-mobilization, and internal destructive momentum—the movement’s leaders have identified Latin America, Sub-Saharan Africa, and parts of Asia and the Pacific as ripe fields for expansion.

The ex-gay movement didn’t reach Latin America until two decades after its founding in the 1990s. Its arrival in the region was part of a larger international expansion of the American-born movement, a move that can be traced to the revelation of Sy Rogers—the former leader of Exodus International, a founding ex-gay institution and among the largest—who felt that God had asked him to “go global” and carry out ex-gay ministry in other countries. In its earliest stages, the movement spread particularly rapidly throughout Latin America and in the Pacific. Since their inception in Latin America, ex-gay ministries have spread to most countries across the region and have directly reached thousands of people with their services and many thousands more with the message that “change is possible.”

Though these ministries are technically independent entities with a passion for “helping homosexuals,” the work undertaken by Exodus Global Alliance affiliates is part of an internationally organized effort that benefits from the organization’s extensive decentralized network. A steady flow of resources, materials, ideas, and opportunities circulate through these transnational networks, including and particularly from U.S.-based Christian organizations and churches to ministries abroad. Today Exodus Global Alliance counts over 200 ministries around the world among its affiliates, many of which fall under Exodus Latin America, Exodus’ Mexico-based regional office. A rather neo-imperial and colorful pie chart on the website of Exodus Global Alliance—conveniently broken down by region—claims that one of its ambitious goals is to reach the 155 million homosexuals around the world with its message of change.

Chapters of like-minded organizations that share this mission exist all over Mexico, throughout Central America, along the Andes, and across the Southern Cone. They have helped spur public protests in Haiti, Jamaica, and Belize. In Brazil and elsewhere they are forging close ties with evangelical politicians, who enjoy rising political representation and increasing influence over public policy. In Ecuador, the promotion of this discourse has served to legitimize and reinforce distinct, existing forms of sexual conversion tactics that have developed independently of this movement, like the practice of “dehomosexualization” found in many of the country’s private drug and alcohol rehab clinics. In recent years, politicians in Ecuador have even called for state-financed conversion therapy, though without much traction.

The message that “change is possible” has had dangerous consequences in practice by legitimizing sexual orientation change efforts conducted in private spaces, such as churches, psychologists’ offices, and sometimes rehabilitation clinics (as in the case of Ecuador). But ex-gay rhetoric can have steep consequences in the realm of public policy as well. Researchers and activists have demonstrated the link, for example, between American ex-gay organizations and affiliated individuals and the Anti-Homosexuality Act in Uganda (passed and subsequently annulled in 2014). After a 2009 conference in Uganda—where American evangelical leaders affiliated with Exodus were present and active—David Bahati, a conservative evangelical Member of Parliament, who attended the conference, urged the drafting of the law. It prescribed, among other penalties, life in prison for “aggravated homosexuality.” Much of the law includes text directly copied and pasted from language and ideas developed by the ex-gay movement. Further, it was explicitly due to a conviction that “change is possible” that President Museveni of Uganda based his decision to sign the draconian Anti-Homosexuality Bill into law: “Since nurture is the main cause of homosexuality, then society can do something about it to discourage the trends. That is why I have agreed to sign the Bill”.

Though not as blatantly, the ex-gay movement has also become a firmly entrenched actor in the political landscape across Latin America from Argentina to Mexico over the past two decades, with damaging consequences for trans*, lesbian, and gay persons and sexual rights advocacy. As in Sub-Saharan Africa, the ex-gay movement is successfully influencing both public opinion (mostly through church networks) and public policy (through deep and powerful connections with political institutions and politicians), as documented by Political Research Associates. Ex-gay groups organize similar conferences to the one held in Uganda (mentioned above) that bring attendees from the United States and elsewhere in the region to provide training, information, and networking in support of ex-gay ministries and activities.

Ex-gay ministries in Latin America tend to keep a low profile by positioning themselves as an independent part of the private sphere in which they claim their activities and speech are protected. But like in Uganda their participation in public discourse and their influence on the political process through the diffusion of the message that homosexuality can—and should—be changed mean their impact is no longer confined to private spaces but rather has material consequences in public life and in broader society.

As the queer activists protesting outside the 2012 ex-gay conference show, the ex-gay movement is not without growing resistance in the region either, and an increasing number of similar public confrontations across Latin America are sure to come.