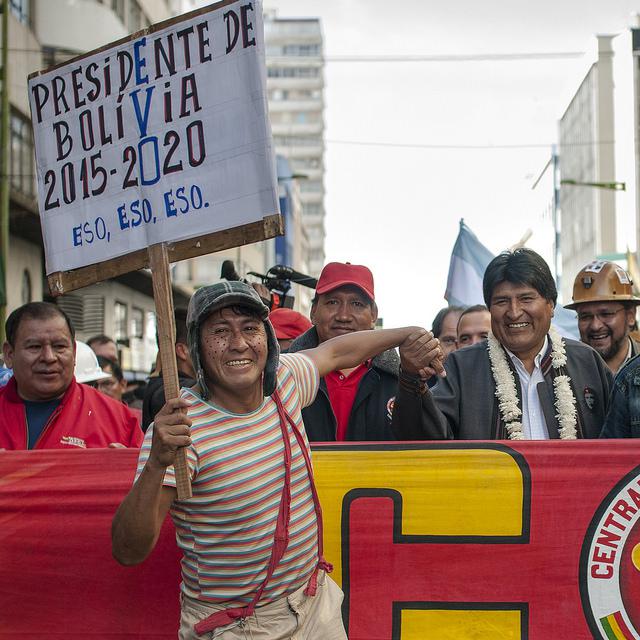 Is Evo Morales just another populist caudillo or has his government made long-lasting and unique changes in Bolivia, a landlocked and ethnically diverse country? Evo’s Bolivia. Continuity and Change takes the middle ground but also invokes both ends of this spectrum of opinion. The assessment by Farthing and Kohl of the first years of the Morales administration is, as they say, a ch’ixi one. This means, according to the Bolivian sociologist Silvia Rivera who used the Aymara term to interpret Bolivian society, that their evaluation of the Morales government is not black or white, or even gray: it is all of them at the same time.

Farthing and Kohl build on three decades of studying and working in Bolivia to craft their arguments, which they also contrast with other perspectives, providing extensive references to the literature and to the views of local and national actors who were part of the process that began with Morales's inauguration in January of 2006. The authors place the Morales administration in historical, geographical, and political context, providing an in-depth analysis of the long and short term challenges the president has faced while also locating him in relation to the social processes that brought him to power.

A unifying theme throughout the book is the authors’ emphasis on the Morales government's effectiveness and achievements, which they consider better than those of the preceeding dictatorial regimes or “business-oriented” administrations. This analysis is based on extensive quantitative data from the World Bank and the United Nations, among others, as well as an assessment of the new constitution (approved in 2009) and laws. Among the most important changes the authors cite are an unprecedented reduction in poverty levels, the first institutional attempts to fight corruption, improvements in health and education, the inclusion of minorities, massive land titling for individuals and indigenous communities, and a sui generis but thus far effective approach to drug control.

Like other left-leaning administrations in the region, Morales and his political party, the Movement Towards Socialism (MAS), have faced significant obstacles in their attempts to transform Bolivia. The limited reach of this “transformation” is especially evident when considering the powerful ideas put forward by the social movements that brought Morales and the MAS to power. These political ideas include decolonizing the state, granting territorial autonomy to indigenous peoples, turning Bolivia into a truly plurinational state, and the application of vivir bien (living well), a novel approach to development, all of which have remained at the discursive or rhetorical level (p. 150).

Farthing and Kohl argue that Bolivia has historically been a country with exploitable natural resources that depends on foreign capital for survival. Bolivia’s position in the global world order thus represents a major barrier to any aspiration for building an alternative to capitalism. As the authors point out, this may explain the unwillingness or inability of the Morales government to tackle 500 years of extractivism. At the same time, like many other countries in the global south, Bolivia faces enormous challenges in achieving sufficient levels of growth, while also protecting the environment.

In a constantly changing political and economic scenario, however, some of the book's arguments and objectives may require reassessment. The text transmits a subtle message: Bolivia today combines growing urbanization and modern aspirations with strong rural and indigenous identities. In the last few years the country has made impressive progress, but there is still much to be done. In this sense, threats from conservative and formerly politically powerful sectors of society that aim for a return to more market-oriented and less socially sensitive governance persist. As such, the Morales administration and progressive sectors of Bolivian society should aim to defend the “process of change” at all costs.

These threats to the process were very real two years ago, when Morales’s re-election seemed to be jeopardized by his own administration's mistakes. The attempt to raise gas prices in 2010 (the so-called gasolinazo), a practice associated with previous neoliberal governments, and the government’s harassment of indigenous peoples over its project to build a highway through the Isiboro Sécure National Park and Indigenous Territory (TIPNIS) in 2011-2012, weakened support for the government. Evo's Bolivia vividly captures this moment and raises serious concerns about the potential return to government practices that privilege business over eradicating poverty. However, with the MAS's landslide victory in the 2014 national elections and Morales’s third term solidly underway, and with no real opposition in sight, the fears of a conservative resurgence dissipated. It is now possible to dispassionately critique the last few years of the Morales government.

Concentration of power in a few hands, and the incapacity to transform the economic model, as the authors note, are two key problems that have only worsened. In the last few years MAS has made questionable alliances with agro-business, but also with political actors that were violently racist against Morales, the MAS, and its social movement supporters in the period through 2009. These alliances go hand-in-hand with efforts to co-opt, divide, or create parallel grassroots organizations as a means to eliminate all forms of opposition from erstwhile social and indigenous movement supporters, and preserve power.

In terms of the economy, for the first time since he gained power, Morales faces a potentially adverse situation. Declining gas prices on the world market may generate strains that will bring to the fore the government’s incapacity to implement its plans for a plural, more diverse economy with massive job creation. Such challenges, along with the fight against increasing corruption, even in organizations like the Indigenous Fund that was created to channel funding to development projects in rural communities, need to be closely monitored in the coming years.

Evo’s Bolivia is no doubt one of the most detailed and comprehensive assessments of Morales’s administration written to date. Its value lies in the authors’ capacity to contextualize the Bolivian experience regionally and globally, without losing sight of the country’s historical and social specificities. This work is an essential reference for those interested in studying the challenges and transformations of the Bolivian experiment that inspired global attention for attempting potential alternatives to capitalist development and colonialism. Equally important, the book will stand as an example of the authors’ strong commitment to social change and their analytical lucidity, which will certainly continue in the work of Farthing, but that will be sadly missed in the case of Kohl who died unexpectedly in 2013 before this book went to press.

Jorge Derpic is a PhD Candidate in Sociology at The University of Texas at Austin. His research deals with the antecedents and the afterlife of collective, sometimes violent, responses to crime in marginal urban areas of Bolivia.