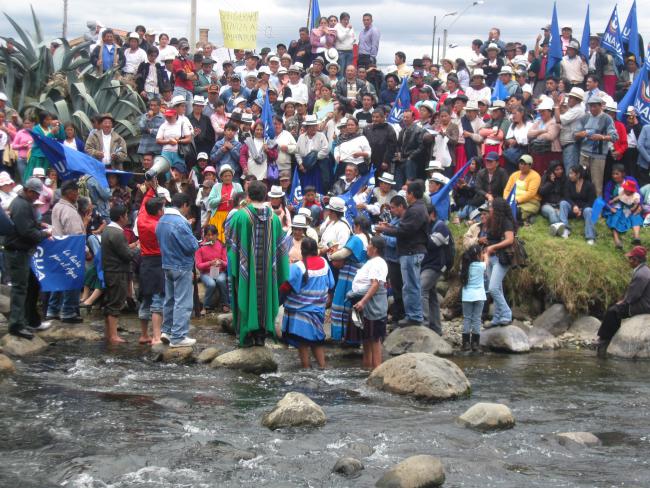 Since his presidential inauguration in 2007, Rafael Correa has faced deepening criticism from indigenous and environmental sectors. Many argue that his policies, which develop and expand extractive industries, turn campesino and indígena territories and watersheds into sacrificial zones. While Ecuador was the first country to grant legal rights to the Pachamama, or Mother Earth in Andean parlance, Correa argued that the Pachamama must be affected “just a little” to fund social welfare programs, build roads, and housing for the poor.  Activists have appropriated the language of the Pachamama as a way to generate arguments about the spiritual and material importance of natural resources, a promising but complicated endeavor.

The “defense of life” coalition formed on the heels of a proposed controversial water law project in 2009. Correa’s administration framed the law as a redistributive action that would effectively end the monopolization of water resources at the hands of private individuals and companies. Campesinos, indigenous people, and environmentalists organized against the law out of concern that it would reduce campesino and indigenous peoples’ ability to manage and access water resources, treating them as just another private interest. The law allowed for contentious mining projects in critical watersheds and increased state control over autonomously managed communal water systems.  Water as life became the rallying cry of the movement, drawing attention to the complex inter-relationships between people and the environment. As one woman put it:  “water is the blood of our life, water flows through our veins, without water, there is no life. Without [agricultural] production, there is no life.”

The coalition’s strength came from an anti-mining movement in the Southern Andes. After several years of organized protests against Toronto-based IAMGOLD’s Quimsacocha mining project, campesinos from the parishes of Victoria del Portete and Tarqui mobilized quickly against the law, brokering alliances with key figures in the indigenous movement. Led by the communal water boards, the local movement was concerned that the Correa administration would use the water law to allow for mineral extraction in their watershed that provided more than 1,500 families with drinking and irrigation water. Framing the broad coalition around water helped activists to move beyond a single-focused project in their backyard to a larger movement against the extractivist development model. Moreover, it allowed them to link up with other communities who did not face the specific threat of mineral extraction but were nonetheless concerned about the commodification of water. Collaborations between water board leader Carlos Perez Guartambel and indigenous leadership called for incorporation of indigenous principles of reciprocity, or ayni, in the search for new development models and demanded that the government respect the rights of the Pachamama, now defined to include watersheds or the Yaku Mama (Mother Water).

The turn towards the language of indigenous environmentalism—a simultaneous global and local construction—provided farmers with a new way of imagining their watershed and participating in a globalized environmental movement. Catholic priests played a particularly important role in redefining the watershed from a contested mineral site into the embodiment of the Pachamama. Crowded into rented buses and personal trucks, campesinos and their allies made multiple trips up to the mine site, where large swaths of bunch grasses, mirrored lakes, and bubbling water streams dominate the alien-like landscape. Drawing on Andean and Catholic spiritual traditions, progressive priests gave outdoor masses that venerated highland water as a sacred, life-giving entity. Leaders appropriated the name of the mining project, Quimsacocha, and indigenized its spelling by adding a K. They referred to the place as Kimsacocha, building a small sanctuary with a chakana (Andean cross) and the Virgin of the Waters of Quimsacocha. In popular talk, people referred to the place as the Pachamama. They argued that the Pachamama should be declared off-limits to mineral extraction and secured in a revised water law. As in other cases, such as the Bolivian water war, Andean cosmovisiones became an important part of the cultural politics of livelihood, helping to reimagine resource rights.

Even though indigenous environmentalism was productive in articulating the movement in defense of life, when re-appropriated by the state it was transformed into a form of “green” development/ “green” neoliberalism. National Assembly members revised the proposed water law to grant Pachamama (as a water entity) the rights conferred to her in the 2008 constitution, but allowed for mineral extraction 2,500 meters from critical watersheds. For the majority of farmers, the mix of conversation with extraction was not enough to fundamentally protect the Pachamama. In contrast to Assembly members, they envisioned her as an integral entity that could not be neatly parsed out into differently managed zones. Several farmers articulated this wisdom, but one in particular put it this way: “Kimsacocha is the Mother Earth. Just like the veins that we have in our body, so does the Pachamama. Instead of blood, her [veins] are filled with water. Kimsacocha is her body.” Without protecting all of the Pachamama, the state’s incorporation of the Pachamama was reminiscent of other actions the Correa government had taken to develop a “green” mining framework characterized by simultaneous extraction and conservation. For instance, in 2007, the government ordered IAMGOLD S.A. to overturn 3,220 hectares of páramo for environmental conservation but did not protect communal watersheds or place gold deposits off-limits to extraction.

The coalition in defense of life was ultimately limited in its ability to fundamentally transform the Water Law, but proved effective in expanding the strength of the national and regional indigenous movement. Following the mobilizations for the Water Law, communal water board leader Carlos Perez Guartambel was elected as President of ECUARUNARI, formalizing the links between Azuay campesinos and ECUARUNARI, and placing mineral extraction at the center of the indigenous movement’s political agenda.

Activation of the links between campesinos and indígenas in defense of life remains critically important in the near future. Drops in oil prices coincide with government efforts to more aggressively develop mineral projects. In 2013 and 2014, the Correa administration made reforms to loosen taxation in its Mining Law to incentivize international mining companies to develop their halted projects. Ecuacorriente S.A. controlled by a Chinese Consortium (CRCC-Tongguan) was the first to sign an extraction contract with the state to build an open pit copper mine project called the Mirador mine in the southern Amazon. The Mirador project made headlines in December 2014, when the body of José Tendetza, a Shuar leader, turned up tortured and dead. A vocal opponent of the Mirador mine, activists link his death to mining politics. He refused to give his land up for the mine and was a signatory to international petitions and legal actions, including one related to the rights of the Pachamama. His death occurred in the context of years of state criminalization of anti-mining activists and efforts to restrict the activity of social organizations in the country through Presidential Decree 016.

In addition to the complex dynamics at the Mirador Mine, environmental defenders are also facing legal threats in Intag where the state mining company ENAMI and the Chilean state company CODELCO seek to develop copper deposits from the previously embattled Ascendant Cooper mining company concession. Javier Ramirez, a community President in Intag, spent ten months in prison for a pre-trial detainment. Found guilty of rebellion in early 2015 upon his release, Ramirez was subsequently sentenced to an additional two months in prison in April 2015 for insulting a government employee affiliated with the mine. As violence continues to mark mining-rich areas affecting indigenous and non-indigenous communities, the politics of indigeneity will likely be tied to an expansive notion of life, as mining conflicts have literally turned into a matter of life and death.

Teresa A. Velásquez is Assistant Professor of Anthropology at the California State University in San Bernardino. Her research on the intersection of mining and water politics appears in the journal of Resources Policy and the edited volume Subaltern Struggles: New Dynamics of Mining, Oil, and Gas in Latin America.