Teachers fight on virtually alone: a militant minority whose interests seem selfish to some and whose tactics seem violent to others. Yet a great many teachers feel they fight not only for themselves, but for their union, their communities, and for Mexican democracy. 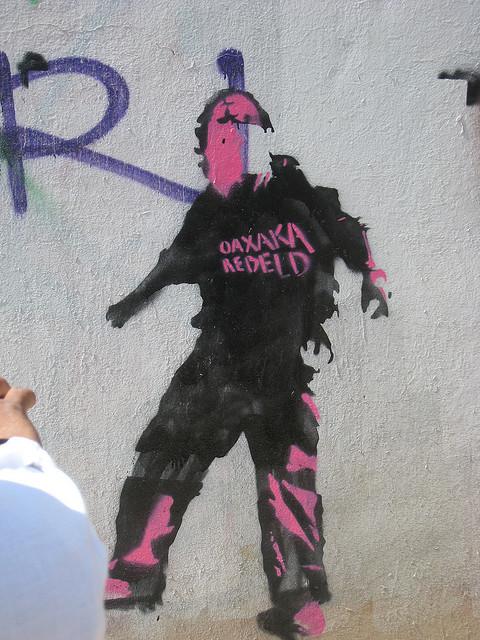 Mexican teachers are mobilizing once again —demonstrating by the tens of thousands—this time against anti-union reforms and the militarization of the state of Oaxaca by its governor Gabino Cué Monteagudo from the center-left Party of the Democratic Revolution (PRD). Nine years after the 2006 teachers’ rebellion, Oaxaca is bracing for another potentially violent conflict.

For the last year, tens of thousands of Mexican teachers have demonstrated, carried out lengthy strikes, seized highway tool booths and government buildings, and clashed with the police and army. These teachers, mainly from the southern and western states of Chiapas, Oaxaca, Guerrero, and Michoacán oppose the 2013 education reform, which grants the government power to evaluate the country’s 1.4 million teachers and remove them if they don’t pass a standardized test. President Enrique Peña Nieto argues that the reform will improve education for the country’s youth, but teachers insist that it is designed to break the union, weaken public education, and destroy what’s left of the country’s social compact.

The teachers, many of whom are indigenous and bilingual, argue that they have developed an educational model appropriate for the communities, parents, and students they serve. The national test, they argue, will not benefit them or their students. Nor will it benefit their own families: In 1992 Oaxaca’s teachers won the right to pass their teaching positions on to family members. Many teachers believe that they should be able to turn their jobs over to their children, but if graduates of other colleges can compete, their children may not get their jobs.

Led by the National Teachers’ Coordinating Committee (CNTE), a dissident left-wing caucus of the National Teachers Union (SNTE), teachers have prevented the examinations from taking place in their stronghold states, closing test sites, burning testing materials, and cutting the hair of any teachers who attempt to take the test. When the national elections for Congress, state governors, and mayors took place this past June, teachers called for a boycott, arguing that all the parties were corrupt and anti-union. And in Oaxaca the union went further, closing polling places and burning ballots in the street, coming into conflict with the police and army and sometimes with grassroots community groups that wanted to vote.

Since June Oaxaca has been occupied by thousands of soldiers and police, and only a few days ago it came to light that in late July the governor had officially called upon the federal government to send the Army, Air Force, and Navy to maintain order. Governor Cué has argued that the strength of la CNTE, which has shown that it can put over 80,000 teachers into the streets, makes it impossible for him to govern without the backing of the military.

Oaxaca has been at the heart of the militant teachers movement, and the federal and state governments are determined to break the union’s significant power there. Since 1992 when, under teacher pressure, the state created the State Institute of Public Education of Oaxaca (IEEPO), the Oaxaca state government has been obliged to hire all graduates of the teachers colleges, which are dominated by the same left groups that lead la CNTE.

Local 22 of the Mexican Teachers Union—controlled by the CNTE—has played a large role in IEEPO where its members hold some 300 of the Institute’s 4,000 jobs. The government alleges that many teachers collect salaries without ever showing up to teach in a classroom.

Governor Cué and la CNTE have been heading toward confrontation since last month when the governor announced that he was replacing IEEPO with a new structure. He also secretly called upon the federal government to send in the military. The CNTE sought an injunction against the closing of the Institute, but a judge threw the union’s request out of court, ruling that the governor’s closing of the agency was legal and that the injunction was against the public interest. The CNTE has called for a national strike to coincide with the beginning of the Mexican school year on August 24, but Cué has announced that any teacher who misses three consecutive days will be fired, in accordance with the 2013 Education Reform Law. In a recent development, courts in Oaxaca City have issued arrest warrants on August 19 for 15 teachers who were accused of having destroyed election materials in the June 7 federal elections.

While education reform has been the central issue, teachers in Oaxaca, Chiapas, Guerrero, and Michoacán also joined the massive demonstrations following the forcible disappearance of 43 protestors last September 26 in Iguala, Guerrero, most of them students at the Ayotzinapa Rural Teachers College. Though over 120,000 Mexicans have been killed, 25,000 forcibly disappeared and hundreds of thousands displaced since former President Felipe Calderón began his war on the drug cartels in 2006, it was the forced disappearance of 43 young students that put a human face on the killings that have plagued Mexico. While the core of the teachers’ opposition is based in Chiapas, Oaxaca, Guerrero, and Michoacán, in this latest spate of protests against state repression, teachers in Morelos and Puebla in central Mexico and by others in Chihuahua and Durango in the north also took to the streets.

Marching under the slogan “alive they were taken, alive we want them back,” parents of the disappeared college students have mounted what has become an international campaign to find their children. Accounts of the violent events, however, suggest that the police colluded with a criminal gang in the killing of the students and the subsequent burning of their bodies.

Though La CNTE’s teachers have shown a remarkable ability over the last 30 years to mobilize tens and even hundreds of thousands of teachers, today they have few allies in the working class. And while the teachers’ strikes and militant protests might appear to be the vanguard of a rising, radical worker movement, they may in fact, be the desperate rearguard action of a labor movement in decline.

Ten years ago things were different. Then the Mexican Electrical Workers Union (SME), an independent union unlike most in Mexico, would have joined teacher protests. But in October 2009 former President Felipe Calderón seized the electrical facilities, liquidated the company, fired 44,000 workers, and eliminated the union. Some 16,000 SME members continue to fight for their jobs, but the union no longer has any economic or political power.

Ten years ago the Miners and Metal Workers (SNTMMRM) might have also offered support, but a 2006 disaster at the Pasta de Conchos mine in the state of Coahuila that killed 65 miners changed that. Union president Napoleon Gómez Urrutia called the tragedy “industrial homicide,” blaming the companies and the government for lax enforcement of safety standards. In retaliation, President Felipe Calderón’s administration falsely accused Gómez Urrutia of embezzling $50 million from his union. With the help of the United Steel Workers of Canada and the United States, Gómez Urrutia fled to Vancouver, B.C. to avoid being imprisoned.

With the miners on the defensive, Grupo Mexico, one of the country’s largest mining corporations, waged a war against the union and eventually eliminated it from the Cananea mine. While the courts have thrown out all charges against Gómez Urrutia, he has continued to lead the union from Canada, fearing to return to Mexico.

Occasionally some group of workers does decide to fight, but this almost always leads to swift retribution. In March, for example, farmworkers in San Quintín, Baja California struck for higher wages against both their employers and the state-controlled union that represents them. The coalition of indigenous fieldworker organizations shut down the Trans-Peninsular Highway that carries produce from the fields to stores in the United States and paralyzed the agricultural assembly line. President Peña Nieto’s government promised investigations but sent the army and police, which successfully broke the strike. Afterwards the companies continued to pay the same low wages.

Most of Mexico’s “official unions” do the government’s bidding: they prevent strikes, work with the company to eliminate rank-and-file militants, and they keep wages low to attract domestic and foreign investment. Many, run by gangsters and lawyers, are “ghost unions” unknown to their members, while 80% to 90% of all collective bargaining agreements are thought to be “protection contracts” that offer only the legal minimum while allowing employers to say they have a union and a contract in order to keep out independent unions. The most important independent union is the National Union of Workers (UNT) made up largely of the telephone workers and university workers unions and some small federations like the Authentic Labor Front (FAT). But their impact is limited.

So the teachers fight on virtually alone, a militant minority whose interests seem selfish to some and whose tactics seem violent to others. Yet many CNTE teachers are convinced that they fight not only for themselves, but also for their union, their communities, and for the Mexican people at large.

Dan La Botz is the editor of Mexican Labor News and Analysis and a co-editor of New Politics.