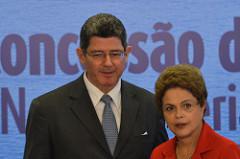 A sharp slowdown in the Brazilian economy presents a critical challenge for the Workers’ Party (PT) government led by Dilma Rousseff. Between 2011 and 2014, economic growth averaged only 2.1 percent annually, compared with 4.4 percent in the 2004-2010 period.

The recent downturn can be squarely blamed on economic policies implemented by Rousseff’s first administration (2010-14). This policy change sought to reduce the state’s role of directly promoting the expansion of aggregate demand through fiscal stimulus and promoting supply side structural change through public investment, a strategy that had been done quite successfully until 2010. Meanwhile, inclusionary social policies concerned with decreasing inequality remained in place.

President Rousseff and her party (including former President Luis Lula da Silva) decided — in an attempt to reduce the rising criticism from firms, banks, part of the Congress, and the media — that the government was intervening “too much” in the economy. They shifted the government’s economic role to providing incentives (generous, unconditional tax cuts to firms) for private investment so as that the business sector would lead (instead of follow) economic growth.

This policy failed completely. This was compounded when unusually dry weather and mismanagement of overall energy policy by Eletrobras, the large state-owned electricity company, pushed the country close to a serious energy supply crisis and power shortage in 2014, even though demand was low because growth had dropped.

Instead of reverting to the previous successful policies of 2005-10, and improving long-term planning (through better technological and infrastructure policies), the second Rousseff administration fully committed itself to the policies proposed by the neoliberal opposition. The underlying purpose of this regime is to generate enough unemployment to weaken the bargaining power of workers.

This power was, perhaps inadvertently, greatly increased by a tight labor market between 2006 and 2014 and the PT government’s social policies. Unemployment had fallen markedly, and average real wages in the formal sector increased at a steady average of 3 percent per year beginning in 2006. In 2015, the PT government moved to take decisive action against this. The generation of unemployment via austerity policies, and shifts in distribution away from wages, create a political climate in which it is possible to roll back the size and importance of the Brazilian state in the economy.

This sudden and drastic betrayal of the ruling party’s own working class base was a reaction to growing criticism of the first Rousseff administration’s economic policies from the powerful conservative private sector. Conflicts over distribution and a hostile new Congress confronted a president and a party that simultaneously sincerely appear to want social change while abhorring conflict with conservative property-owning classes. This squaring of the circle had seemed possible prior to 2011 when there was a the foreign exchange bonanza, but now the PT’s moderation and heavy dependence on funding from big firms and banks is taking a toll.

These new policy changes have been much more significant than changes in external conditions, such as foreign trade and the availability of external finance. These have deteriorated since 2011, but not to the point of triggering a crisis as Brazil is a relatively closed economy. Exports are not a big source of demand, and the country still has comfortable levels of foreign exchange reserves and relatively low levels of foreign debt.

Finance Minister Joaquim Levy told the Correio Brasiliense newspaper in June that he was going to “Get out of rhetoric and face some realities.” He said, “We are going to have to reverse the reduction of the supply of labor.” According to Levy, there were people who did not want to join the labor market, who now will have to look for jobs, and that is why the supply must increase. He continued, “There is no economic growth without an increase in labor supply.” The minister made an obvious mistake: in the neoclassical growth theory he alludes to, it is full employment that would generate growth, and not the unemployed, who by definition do not produce anything.

Ironically, the relatively positive foreign exchange situation, as recently pointed out by Matías Vernengo, has been confirmed by the very agency that downgraded Brazil in early September. Standard & Poors justified rating Brazil below investment grade because of its fiscal difficulties and internal government debt, not external financing problems.

It is logically impossible for the market to force a government to default on internal debt denominated in its own currency. In any country where the central bank buys and sells any quantity of short-term government bonds in the secondary market to set the basic interest rate of the economy, any bonds not purchased by the private sector are bought by the central bank at the set interest rate. This is ignored by S&P. But to be fair, after Brazil, S&P also downgraded Japanese government bonds, and even downgraded U.S. government bonds some time ago, so S&P’s absurdity is not restricted to Brazil. As the credit rating agencies said when they were taken to court for their role in the financial crisis of 2008, their ratings are “just an opinion.” Unfortunately, President Rousseff took these opinions seriously.

Ongoing corruption scandals are having negative effects on the economy. The government had a disastrous reaction to the scandal centered on state-run oil company, Petrobras (which implicates a number of top PT government figures). Instead of trying to preserve the company while the law processes the accused, it treated Petrobras as a political live wire and tried to distance itself from it. The government took almost every wild speculative short run change in the company’s stock market valuation as truly reflecting the actual value of Petrobras assets. This aggravated (and often created) serious credit constraints for the company.

Then the government paralyzed Petrobras investment plans. To make matters worse, some big companies that supplied Petrobras and were under suspicion of corruption were barred from doing any business with the government. The Rousseff administration did not do enough to prevent this. As a result, not only did Petrobras cut investment and drastically reduce orders from a large number of its big private suppliers and their own large supply chain, this was a disaster for a number of sectors, such as shipbuilding.

The political impact of the scandals themselves was greatly amplified by the manipulation of politically ambitious magistrates, acting in concert with opposition-aligned big media outlets. The resulting steep fall in popularity put the Rousseff administration in a very fragile political position. This has helped shift economic policy toward austerity as it has accentuated a trend, already dominant among PT party leaders, immediately following the October 2014 elections, to do whatever the “market” – i.e., big private business, the opposition and the media –wants. It is these austerity policies, together with the government’s disastrous reaction to the Petrobras scandal– much more than any changes in international economic conditions – that are causing the current deep recession.

If we consider the efficacy of the austerity measures pursued by Finance Minister Levy in controlling the size of gross government debt so as to restore some mysterious “level of confidence,” they have been a total failure. Government spending has been cut in the most arbitrary and ultimately unsustainable way, and the recession provoked by fiscal, monetary, exchange rate and income policies (increasing the monitored prices of public utility services),together with the fall in the value of exports, has predictably cut fiscal revenues drastically. So, within a few months all the primary surplus targets had to be revised downward.

Moreover, interest rate increases set by the Central Bank added to the cost and size of the government debt. If efficacy is measured in terms of the new policy’s actual objectives, it is a resounding success. The unemployment rate shot up very quickly. Inflation has risen, and will be far above this year’s upper bound of the official inflation target of 6.5 percent. The Central Bank simply “suspended” the inflation target for this year, after having not exceeded its upper range for almost a decade and a half.

But as the purpose of accelerated inflation is to lower real wages, something that the government euphemistically calls the “correction of the imbalance of relative prices,” it did nothing to prevent—and in fact welcomed—a major currency devaluation and increased public utility prices. Public investment has collapsed.

The efficiency of government services has been compromised by many arbitrary and frankly ridiculous spending cuts. My federal university had received less than 30 percent of its approved budget for this calendar year by September. Horror stories like this abound in the Brazilian public sector. Such policies help create a consensus that the state is inefficient (and corrupt), provoking a lot of talk of reducing, more permanently, government expenditures and even social transfers.

The government is already planning to send to Congress large reforms of the public social security system. Beginning in the 1990s, Lula and the PT led a partially successful opposition to both macroeconomic austerity and neoliberal reforms, and this helped Brazil escape some of neoliberalism’s worst impacts. Now they are leading the drive for neoliberal reforms. To date these new policies have met with little political resistance, as they are precisely what the conservative political forces controlling Congress want, and because now there is no big left-wing party to oppose them, as they are being implemented by the (very disciplined) PT itself.

For students of Brazilian history, the current wave of scandals and pressures for economic austerity come as no surprise. Even though historically, the President and executive have been very powerful relative to Congress and the judiciary, whenever there was a more or less left-leaning president, no matter how moderate, Congress and the judiciary incited a political crisis that generated an informal parlamentarism. This happened when former dictator Getúlio Vargas came back as a democratically elected President in the ‘50s, and with President Goulart before the military coup in the ‘60s. There was a failed attempt to repeat this strategy during the Lula administration, with the so-called mensalão (payola) crisis (regarding proven illegal campaign contributions and alleged bribes for members of congress). It is happening again with President Rousseff.

The case of President Fernando Collor was completely different. His candidacy was an act of desperation, as nobody better was found who had any popular appeal, and it was necessary to prevent Lula and the left from winning the 1989 election.

Historically, there have been two easy ways to get rid of left-leaning governments in Latin America. The first is through a serious balance of payments crisis. The second, during the Cold War and especially after the Cuban missile crisis, was a US-supported military coup (Chile had both). After the 2000s, the balance of payments situation of developing countries in general, and Brazil in particular, improved significantly. With the Cold War over, the Brazilian army has no interest in a coup.

The current political crisis is more similar to the Vargas situation in the ‘50s, as both then and now Brazil faces neither a crippling balance of payments crisis nor the threat of a military coup. But it is unlikely to end as tragically for President Rousseff (President Vargas committed suicide) because she, ex-president Lula, and the rest of her party have already surrendered without much of a fight.

Franklin Serrano teaches at the Instituto de Economia at the Federal University of Rio de Janeiro, and is a Senior Research Associate with the Center for Economic and Policy Research (www.cepr.net).