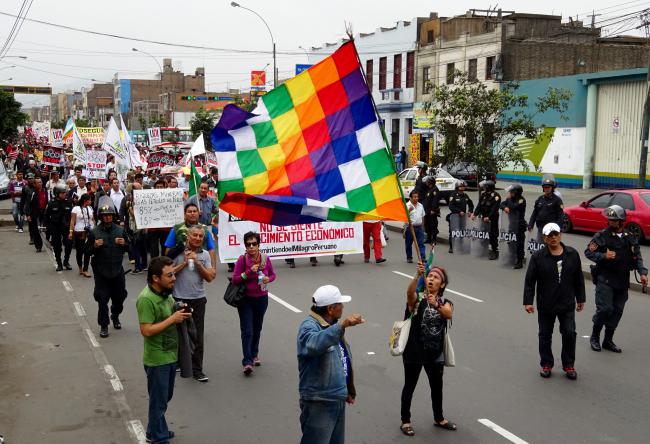 At the annual governors’ meeting of the International Monetary Fund (IMF) and the World Bank in Lima between October 5th and 12th, an estimated 800 representatives from 188 countries negotiated the shape of the world’s soon-to-be renovated finance infrastructure. While the international media focused on the official event, 1,200 people attended the Plataforma Alternativa conference—a parallel three-day meeting organized under the theme “Belying the ‘Peruvian Miracle.’”

The World Bank and IMF’s governor’s meeting was safeguarded by three perimeters of police. Peru reportedly mobilized 20,000 police to handle this event, many of whom were safeguarding key areas for some 12,000 foreign visitors. In stark contrast, the counter-conference was free, open to the public, and streamed online. It featured U.S. economist Joseph Stiglitz, a winner of the Nobel Prize on economics, former World Bank chief economist, and outspoken critic of its policies, as its keynote speaker.

“Inequality is a choice—not the result of inevitable economic laws,” Stiglitz said after reminding the audience that Latin America has the highest rate of wealth disparity among world regions. Just last week, Oxfam—one of several organizations in charge of the conference—released a report indicating that, at the current pace, one percent of Latin Americans would be wealthier than the remaining 99 percent by 2022. Attendees at Plataforma Alternativa’s conference represented dozens of organizations and countries as diverse as the Netherlands, China, the United States, Belgium, Zimbabwe, Colombia, Indonesia, Spain, Mexico, the Philippines, Germany, Palestine, and Argentina.

On October 9th, an estimated 5,000 people marched across 70 blocks in Lima, from Plaza San Martín to the first police perimeter around the official conference. Groups at the protest included indigenous feminist organizations, the Lima-based Comando Feminista, Bloque Hip Hop, worker unions, the Peruvian Campesino Confederation, the U.S.-based Oakland Institute, and dozens of others.

Among the marchers was Máxima Acuña, an indigenous agriculturalist from Cajamarca who has become famous worldwide for standing up to the world’s largest open-pit gold mine, Yanacocha. As a candidate, president Ollanta Humala promised to ban the mining project, but he has since reneged on this.

“The company has tried to force me off of my land through violence and delinquency,” said Acuña at a conference panel, her voice quivering as she detailed how police and company employees attempt to intimidate her. “I live with this daily. Every day I am crushed by them.” A new documentary film that features Acuña, Hija de la Laguna, was screened at the conference. It was the first time Acuña had seen it.

During the march, Acuña told me about how the company continues to operate despite a government freeze on its activities. I asked her why, unlike her neighbors, she refused to sell her land and thus became an obstacle—and a target—for the company. “Many people think only about money, but I am attached to my land,” she said. “I would rather die than give it up. Because I didn’t sell the rights to my land, I live with my house under everyday police surveillance from their new post nearby.”

Given Peru’s recent experiences with deadly mining conflicts such as Tía María, Las Bambas, and La Oroya, it comes as no surprise that many of the Plataforma panels focused on extractive industries. For two decades, the Peruvian state has adopted natural resource extraction as the leading engine behind its rapid economic growth—under the guidance and financing of the World Bank and IMF.

The Peruvian investigative organization Convoca presented its findings that between 1994 and this year, almost 30 percent of all financing from the World Bank Groups’ International Finance Corporation, or IFC, had been allocated to extractive projects. The IFC has a five percent stake in the mining project that will require Acuña’s displacement.

As the global price of mineral commodities boomed up to its peak in 2013, Peru’s government promptly expanded the scope of extractive activities in its territory. At the same time, however, the number and intensity of social conflicts over these projects escalated. The ombudsperson’s office documented 223 social conflicts in September of 2013, the vast majority of which surrounded mining projects. The same report noted that 196 people were killed and 2,369 were injured in conflicts over natural resources between 2006 and 2011.

“There are visible tensions between companies and communities,” Convoca’s Gabriela Flores told me. “The state allows this to go on without intervening, until everything erupts, and we see deaths, injuries. By the time it has to intervene, it is too late.”

The frequency of conflicts has also been bad for business. Industry advocate and economist Hernando de Soto estimates that protests currently paralyze $70 billion dollars of mining investment in Peru.

Last year, the IMF suggested that Peru’s natural resources could ensure its growth to levels reaching industrialized countries within only a few years. Just last week, however, the IMF released a report suggesting that Latin America was headed towards the first recession since the end of the global financial crisis, owing to reduced global demand for raw commodities.

“When countries extract natural resources, they become poorer. They had resources, and now they don’t,” Stiglitz said in his talk. “Unless you reinvest the benefits from below the ground above the ground, you will be poorer, and vulnerable to external shocks, like now.” However, according to Stiglitz, the IMF enacts “tariff structures that make it very difficult for developing countries to diversify their economies.”

The conference also focused on the recent signing of the Trans-Pacific Partnership, or TPP, a twelve country trade agreement that includes Peru, Japan, Mexico, the U.S., Australia, and Canada. The TPP includes some labor and environment protection measures lauded by U.S. President Barack Obama as new and “absent in previous agreements.” However, according to José de Echave, a former Peruvian Vice-Minister of Environment, the 2007 free trade agreement between the U.S. and Peru already included these standards, and in fact served as a template for their wording in the TPP.

de Echave notes that rules within the 2007 trade pact prohibited the rollback of environmental and worker protections. However, in the last two years alone, Humala’s government has approved a series of five reform packages meant to “encourage investment” by altering approval processes and the power of the state’s environmental oversight organization. That the Obama administration has failed to enforce rules set by that earlier agreement is a sobering check on the U.S. president’s optimism about the TPP.

During the conference, members of the Inter-Ethnic Association for the Development of the Peruvian Jungle, AIDESEP, expressed their dismay at the softening of environmental and social standards for extractive industries. “We didn’t use to see economic booms or busts. We are neither rich nor poor—we are self-sustaining,” said Wilmer Sánchez of AIDESEP. “The introduction of these international cycles has been bad for us, and bad for the Amazon.”

Only six years ago, the international political economy made its presence felt in Peru when it underscored an escalating set of tensions that culminated in the Bagua massacre. Near that Amazonian city, national police were ordered to open fire on indigenous protestors—including members of AIDESEP—who were blocking a highway to demand that the state repealed concessions over their territory granted to logging, oil, and other extractive industries. Some of the protestors retaliated and wounded several police. Leaked cables from the U.S. ambassador at the time warned the Peruvian government that, were it to “give in to the pressure, there would be implications” for the treaty.

Confrontations like these crystalize the frictions between different understandings of what “development” is and who it should serve. “The Trans-Pacific Partnership is almost certainly a bad deal for Peru,” Stiglitz said. “It is a strategy for non-development.”

As in the other signatory countries, the TPP will require approval from Peru’s legislature. This, coupled with the leverage social movements wield as Peru heads into general elections, opens a great opportunity to pressure the government and would-be presidents to reject it.