After Haiti’s First-Round Elections, the Legacy of Intervention Looms Large 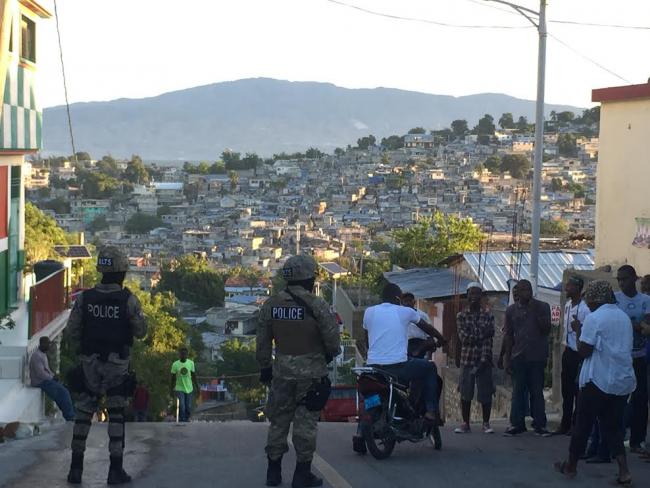 Five years ago, Haiti’s current president, Michel Martelly, was leading street protests, alleging massive fraud on the part of the government after preliminary election results left him out of a second round. Those results, announced in early December 2010, showed Mirlande Manigat, a university professor, and Jude Célestin, the candidate backed by then president René Préval, advancing to a runoff. In third place, by just a few thousands votes, was Martelly.

Protests engulfed Haiti’s capital and other large cities throughout the country. The U.S. Embassy in Port-au-Prince fanned the flames by issuing a statement questioning the announced results. Documents obtained through the Freedom of Information Act show the U.S. later provided support to groups involved in the protests. Eventually a special mission from the Organization of American States (OAS) traveled to Haiti and recommended changing the results. It wasn’t until after the U.S. revoked the visas of leading officials and threatened to cut off aid that Célestin withdrew from the race. As a result, Martelly advanced to the second round, and eventually won the presidency.

Preliminary results of Haiti’s October 25 first-round presidential election were released last week, showing Jovenel Moïse of Martelly’s ruling PHTK party in first place with 32.8 percent of the vote and Célestin, the man Martelly replaced in 2010, with 25.3 percent. The two are set to compete in a runoff election on December 27. In third and fourth place, respectively, were Moïse Jean Charles, a former opposition senator, with 14.3 percent, and Dr. Maryse Narcisse of former president Jean-Bertrand Aristide’s Fanmi Lavalas party, with 7.1 percent. In a crowded field of 54 candidates, no one else secured more than four percent of the vote.

Contrary to 2010, this time it’s Martelly and his political party who are being targeted by protestors’ angry allegations of fraud. At least a half-dozen candidates, including many top contenders, have alleged that the president’s handpicked successor, Moïse, benefitted from that fraud, and they have called on him to resign from the race. A coalition of seven candidates has also demanded the creation of an independent commission to investigate and evaluate October’s election results.

The controversy surrounding the 2010 elections, and the subsequent intervention by the international community continues to fill the Haitian electorate with mistrust. “2010 changed everyone,” André Lemercier Georges, the campaign manager for presidential candidate Jean Henry Céant, said in an interview before election numbers were announced. “If the same thing is happening today, somewhere people are in a room deciding the results.” Céant is one of the candidates questioning the outcome of the October vote.

The Haitian people seem to be just as skeptical. History shows that when Haitians have faith in the process they turn out. Presidential elections in 2000 and 2006 both saw participation rates near 60 percent. But this year, more than 70 percent of registered voters stayed home on election day. In fact, the first-place finisher, Jovenel Moïse, received the support of just 8.7 percent of all registered voters. 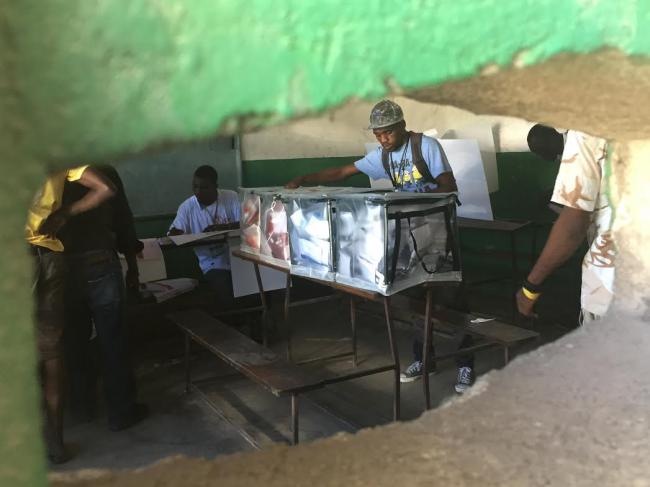 There are many reasons to believe that this election was no less fraudulent than previous ones. For one, voting “monitors” did more to cause fraud than to prevent it. In October, the government distributed more than 900,000 accreditation passes to the dozens of parties that have proliferated as proxies for the government since Martelly’s ascent to power in 2010. Armed with passes, these monitors were allowed to vote in the polling places they were observing, despite not being on the electoral lists in those districts. According to observer groups, these monitors made up nearly 50 percent of voters in the populous West department. The passes became such an important tool that a black market developed in the days leading up to the vote; in some cases, they were sold for as much as $30 per pass. What’s more, local observers noted that checks put in place to prevent multiple voting were not always followed.

Despite the small voter turnout and allegations of fraud, the international community, who largely financed the elections, has firmly backed the results. The OAS, for example, said the announced results matched their internal “quick count” from Election Day. The Core Group, made up of the major donor countries, the United Nations, and the OAS, also released a statement that called on candidates to “deal with any and all contestations” through the country’s electoral authority, rather than protesting the results on the streets. 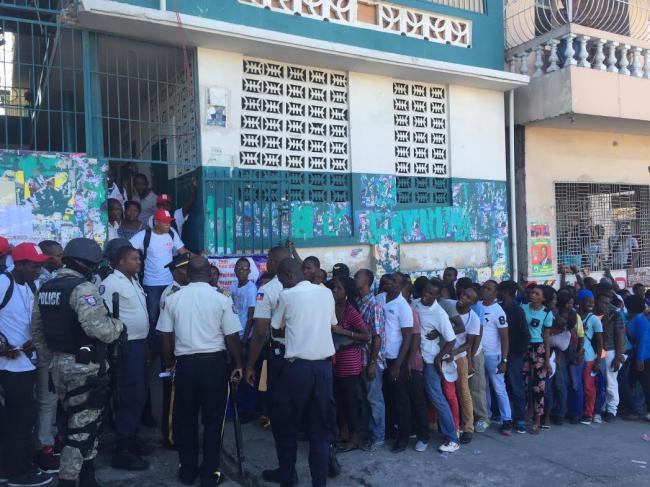 As corruption allegations continue to swirl around Michel Martelly, power has been consolidated at the top during his five years as president. In 2012, Martelly replaced elected mayors with political appointees across the country. That same year, the terms of one-third of the Senate expired, making legislating increasingly difficult. “First thing, after I establish my power… I would close that Congress thing,” Martelly is quoted as having said back in 1997. In January 2015, he got his wish when the terms of the entire Chamber of Deputies and another third of the Senate expired, leaving the country without a functioning parliament and Martelly to rule by decree.

Haiti’s electoral council is exemplary of several controversial reforms that have taken place as Martelly expanded his own executive powers. The current electoral body is actually the fourth since president Martelly took office. After opposition groups denounced previous incarnations as too close to the government, new political parties were formed in order to lend support to the government and create a “consensus” around electoral procedures. An electoral accord signed in 2014 was a product of negotiations between nearly 50 political parties, though many were brand new and barely known to the public. Encouraged by a law on political party formation that allows parties to be created with as few as 20 members, 128 parties registered to compete in the current electoral process.

While the opposition has denounced the undemocratic practices of the current government for years, the international community has largely stood by, seemingly giving its tacit approval. This perception was only reinforced in August’s legislative elections when one in six voting centers were ransacked on Election Day. Nearly a quarter of all votes cast were simply never counted. Even Haiti’s electoral council singled out the ruling PHTK party and others close to the government as being primarily responsible for the violence and electoral abuses in August. Despite this, very few candidates were actually sanctioned for their actions. The belief that the international community would sign off on October’s presidential vote results, no matter how flawed, opened the door for electoral abuses.

To be sure, the political dynamic in Haiti has shifted since 2010. U.N. troops that have been present in Haiti since the 2004 coup that ousted former President Aristide are beginning to withdraw. Whereas in 2010 they numbered nearly 10,000, that number has today dwindled to just a couple thousand. For the international community, the current electoral process was as much a test to determine if the Haitian police could provide the security— and political stability— needed to take over for U.N. troops as it was a poll to elect a new president, legislature and local officials. After the violence of August elections, the fact that October’s vote was largely peaceful was enough for those in the international community to accept the outcome as legitimate.

Equally concerning is the international community’s belief that Haiti’s security and military capabilities can be held accountable. In the midst of a crackdown on political protests, the ruling party is making plans to reinstate the Haitian army, which was disbanded in the 1990s after its involvement in massive human rights abuses and military coups. After initially blocking the plan, the international community appears to have shifted. The Inter-American Defense Board, a body of the OAS, developed a “white paper” in July focused on reinstating a Haitian defense force with the support of the U.N.

Though the government’s candidate, Moïse, has been largely quiet on the issue, Martelly has said he hopes to begin recruitment before the end of his term in February. “The army has always been a part of our policy,” a campaign advisor for PHTK said during an interview after August’s legislative elections. “There is no way to have Haiti without an army.”

The government’s repressive response to post-election protests calls into question the government’s plans to grow its security forces. As demonstrators have taken to the streets against allegations of fraud, Haiti’s police have been sent in to break protests with tear gas and batons. The Haitian government has employed a newly created unit of the police, known as the Brigade of Operation and Departmental Intervention, to crack down on dissent. In many ways, the Core Group statement that urged the Haitian government to “apprehend and prosecute those responsible” for the disturbances after the results were announced has been interpreted as a blank check for Haiti’s security forces. Thus far, more than 60 activists of the Pitit Dessalines movement of third-place finisher Moïse Jean Charles have been arrested and at least one killed. Human rights activist Pierre Esperance has denounced the wave of political repression and called on police to disband the new unit.

Meanwhile, the race to replace Michel Martelly remains far from settled. The group of seven opposition candidates has refused to formally contest the results, arguing that it would only serve to legitimize the fraud. Narcisse, however, did formally contest. Meanwhile, the international community has already moved on to the second round scheduled for December. Jude Célestin has so far held the line and continued to pressure the electoral council to form an independent commission to investigate the results. After internationally supported coups in 1991 and 2004, in addition to the electoral masquerade of 2010, Haitians taking to the streets are fighting to restore the sovereignty of, and faith in, their electoral process.

Ginette Chérubin, a member of the 2010 electoral council, has argued that the only way this will happen is if a Haitian-run commission is created to investigate electoral fraud – a body she says could serve as a “buffer” against any international interference. Her assessment of this happening in the current political environment, however, is less than optimistic. Chérubin wrote last week, referencing her book, The Rotten Belly of the Beast, five years later: “It is painful to note that the putrid belly of the beast is more rotten than ever.”

Jake Johnston is a Research Associate at the Center for Economic and Policy Research in Washington D.C. He is the lead author of CEPR's Haiti: Relief and Reconstruction Watch blog. His articles have been published in outlets such as Al Jazeera, The Nation, VICE News, TruthOut and Boston Review.