The Salvadoran Right is copycatting anti-corruption movements in Guatemala – but is it all just a political smokescreen? 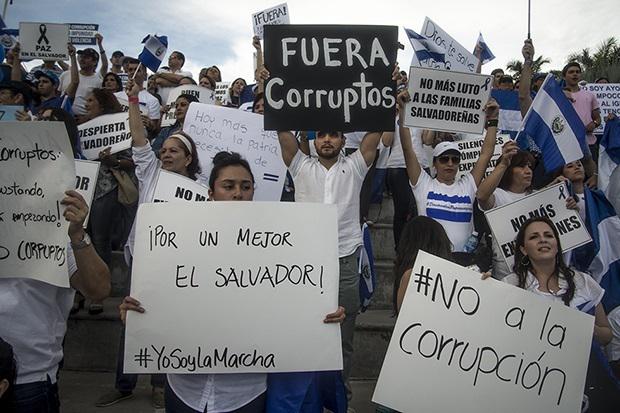 Over the summer, news out of Central America seemed to take a positive turn. According to reports worldwide, the streets and plazas in several countries had filled with empowered citizens, united under the banner of “anti-corruption.” In Guatemala, a president notorious for the genocidal atrocities he helped wage against indigenous communities during the U.S.-backed civil war was toppled and disgraced. In Honduras, thousands marched against a repressive regime with a dubious mandate, stained by a 2009 coup d’état against democratically elected president Manuel Zelaya. In neighboring El Salvador, strategists of the political opposition looked on longingly as pundits enthusiastically heralded a “Central American Spring.”

Unlike in Honduras and Guatemala, in El Salvador, the political Left has governed the country since 2009, placing the Salvadoran Right in the unfamiliar role of the opposition. Hoping to capitalize on the trending currents next door, El Salvador’s elites are now hastily hoisting the banner of anti-corruption politics. Theirs is a cynical, if clumsy, effort to foment a tide of popular opposition against the current FMLN administration of President Salvador Sánchez Cerén. The conservative Nationalist Republican Alliance (ARENA) party is leading this charge, desperate to recover executive power and, with it, unbridled access to the state coffers it once ransacked. This movement is acting through a handful of small but well-funded right-wing civil society organizations, such as the Movimiento de 5 en 5, Grupo 300, and Democracia Limpia, as well as powerful economic groups like the National Association of Private Enterprise (ANEP) and the right-wing think tank FUSADES, ARENA, and its private sector allies. They are convening marches, filling headlines with empty accusations against the FMLN, and flooding social media with snappy civic hashtags like #YoTambiénEstoyIndignado (“I’m Outraged, Too”) and #NoALaCorrupción (#NoToCorruption).

The hypocrisy of this tactic is hard to overstate. From 1989 to 2009, the ARENA party oversaw the disappearance of more than $3.9 billion in public funds. The extent of such corruption only came to light after ARENA lost the presidency. Former president Francisco Flores (1999-2004), the poster boy for the ARENA party’s legacy of corruption, is now on trial for misappropriating at least $15 million in Taiwanese aid for earthquake victims. Even the U.S. State Department, historically a loyal supporter of ARENA politicians, admitted in a cable released by Wikileaks that the Salvadoran party’s finances were dependent on its ability to “hand out” government “patronage.”

Since unseating ARENA in 2009, the FMLN administrations of Mauricio Funes and Salvador Sánchez Cerén have made unprecedented efforts to investigate and prosecute many high-ranking former officials, like Flores, for acts of corruption. At the same time, the Salvadoran government, under the FMLN’s leadership, has completed several important public works projects, such as major highway constructions and hospital repairs, that languished unfinished, in part due to the rampant theft and embezzlement that occurred under ARENA. In addition, the FMLN has enacted new policies aimed at improving government transparency, such as the Access to Public Information Law; the establishment of a Secretary for Citizen Participation, Transparency and Anti-Corruption; the creation of a digital open government platform; and the establishment of a new policy forcing government institutions to present and publish annual reports of their activities. The Foundation for the Study of the Application of the Law (FESPAD) has observed that since the election of a leftist government in El Salvador there have been “important advances oriented towards honest and transparent public administration based on accountability, access to public information as well as the prevention and investigation of State corruption.”

For months now, the Salvadoran opposition has recklessly thrown corruption allegations at the FMLN administration. Thus far, however, they have been unsuccessful in making such allegations stick. As a result, conservative efforts to rally the public against the government have floundered. In a country accustomed to large protests, the Salvadoran Right has failed to bring more than a few hundred people into the streets – despite significant efforts on social media. The demonstrations have consistently featured an elite “who’s who” of ARENA party leaders and allies. Even government detractors have dismissed these events as partisan political theater.

This is not to say ARENA’s efforts have been wholly unsuccessful. While street mobilizations have faltered, ARENA’s diplomatic maneuvering has gotten significantly more traction. Its latest instrument of choice is the so-called CICIES, or International Commission against Impunity in El Salvador. And it’s here that ARENA has encountered its old ally: the United States.

The CICIES proposal is modeled on the International Commission against Impunity in Guatemala (CICIG), the United Nations-run body whose investigations recently toppled President Otto Pérez Molina and his vice president, Roxanna Baldetti. The CICIG was founded at the behest of human rights organizations to address the activities of paramilitary security groups that undermined the fragile achievements of Guatemala’s peace accords. Today, these groups defend the CICIG as the only feasible means of imposing justice in an utterly compromised judicial system.

At the same time, significant U.S. financial backing for the CICIG has also served to justify ongoing U.S. assistance to abusive Guatemalan security forces and neoliberal economic agreements with corrupt Guatemalan administrations. As the U.S. promotes the Alliance for Prosperity in the Central American Northern Triangle, a controversial economic and security strategy modeled on Plan Colombia, the CICIG has emerged as a key player. During a March visit to Guatemala, Vice President Joe Biden himself stressed that “the International Commission against Impunity in Guatemala should be extended” as a condition of the Alliance.

In 2011, then Salvadoran president Mauricio Funes considered the implementation of a commission similar to the CICIG. The ARENA party, however, strongly opposed the proposal. At that time, former ARENA presidential candidate Rodrigo Ávila declared that in El Salvador there were sufficiently capable police, jurists, and lawyers. “To come and say that we need foreign attorneys […] who do not know the reality of the country” was, Ávila argued, “a blow to the capabilities of Salvadorans.”

The idea of creating an anti-corruption commission in El Salvador did not resurface again until this year – this time as a suggestion from the U.S. State Department. During a visit to the country in July, State Department Counselor Thomas Shannon hailed the CICIG, and recommended the implementation of a similar model throughout the region. “It would be intelligent for El Salvador and Honduras to seek the support of the international community” in combating impunity and corruption, Shannon told a group of Salvadoran reporters.

ARENA, in a sudden change of heart, quickly echoed Shannon’s call. “The scourge of corruption and high levels of impunity are affecting our country and democracy,” ARENA legislator David Reyes told the media in late August. “With this type of independent international body, many of the problems can be solved, and [it will] help recoup trust in our institutions.” On October 12, ARENA party representatives held a press conference announcing the delivery of a letter to the president calling for the establishment of CICIES. The conservative organization Allies for Democracy, a USAID-supported group whose membership includes the powerful National Association of Private Enterprise, has also since come out in favor of CICIES.

While recognizing the gains of Guatemala’s U.N.-backed anti-impunity commission, historian Greg Grandin noted in The Nation that under other circumstances, CICIG might “easily be dismissed as a neocolonial imposition meant to press order on a country so that it could continue to participate in the ‘international community’ as a ‘responsible’ free-trade partner.” The fact that the U.S.’s statements regarding the CICIES come at the same moment that the U.S. is pushing the Alliance for Prosperity suggests that State Department concerns about corruption in the region are less than altruistic. As Thomas Shannon told Salvadoran media, “It is strategically important for us to have a successful Northern Triangle in terms of our regional policy.” If the State Department has its own interests in mind as it pushes for an International Commission against Impunity in El Salvador, its recommendations have played nicely into the hands of El Salvador’s right-wing opposition.

To be sure, the Salvadoran Left is not blind to ARENA’s opportunism. Despite the rampant corruption during two decades of ARENA governance, the U.S. never pushed for an International Commission against Impunity in El Salvador until the election of a left-leaning administration. Most former ARENA officials have little to fear today; the ten-year statute of limitations for crimes of corruption in El Salvador now protects most ARENA officials from prosecution, leaving only former President Tony Saca (2004-2009), who since defected from the party and is therefore of small concern to his former colleagues, and, of course, the FMLN.

The Salvadoran government and other transparency advocates contend that unlike in Guatemala, the very institutions created by the 1992 Peace Accords would fight corruption and impunity. “After the armed conflict, the intervention of international institutions like ONUSAL [the United Nations Observer Mission in El Salvador] was justified because there wasn’t institutionality in the country […] The Truth Commission report even said that the judicial system was complicit in systematic human rights violations,” explained Abram Abrego, director of the respected legal aid non-profit FESPAD. “The judicial branch was questioned, and an international organization was necessary to verify its conduct […] But after more than 20 years, institutionality has developed in other ways. There’s more to do,” Abrego says, “but the country now has better laws than after the Peace Accords; it has better guarantees.”

Because of this history, Salvadoran progressives have thus far dismissed the need for an international commission to investigate corruption and impunity, calling instead for judicial reform to ensure justice within the country’s existing institutions. “The bourgeoisie is asking for it, not the people,” says Margarita Posada of the National Healthcare Forum, in reference to the proposed Commission. “What our people want is justice, and for the judicial system to work."

In a recent editorial, Luis Cruz of the youth organization Progre expressed similar sentiments. “Salvadoran institutionality is still weak,” Cruz notes, “and the response should be to solve our problems by strengthening ourselves without appealing to foreign institutions.” In a rally outside the Supreme Court, Francisco Garcia of the Popular Coalition for a Peaceful Country without Hunger (CONPHAS) declared that, “The issue of purging the judicial system is an urgent necessity in order to guarantee the democratic transformations in this country.” Groups like CONPHAS, the National Healthcare Forum, and Progre have rejected the proposed Commission as a political smokescreen. Instead, they are focusing on critical measures like the election of a new Attorney General, the creation of an internal body to investigate corruption within the judicial system, and the dismissal of compromised judges from the bench.

The fact that ARENA’s calls for an international anti-corruption commission have no resonance with the country’s popular movement organizations has not deterred El Salvador’s elites in their crusade. Indeed, the U.S. State Department has bolstered their message. In this respect, their charade reveals the disturbing underside of the anti-impunity movements that have taken hold in other parts of Central America, often unseen to the international community.

There is much work to be done in El Salvador, and all of Central America for that matter, to claim victory in the battle against corruption and impunity. That is precisely why it is imperative to see this right-wing anti-corruption discourse in El Salvador for what it is: a cynical strategy to return to the status quo at a time when the powerful interests who have historically run the country are being challenged.

Hilary Goodfriend is a researcher in El Salvador. A graduate of New York University in Latin American Studies, she is currently completing a master’s thesis at the Central American University (UCA) in San Salvador.