Indigenous groups and social movements in Ecuador seek to translate the concept of “Buen Vivir” into policy. 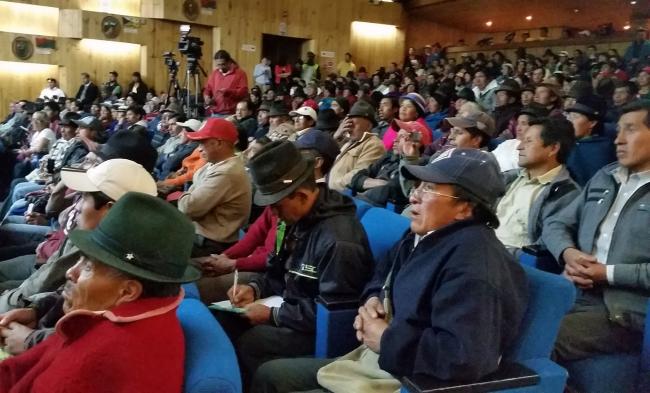 "Es la etica del estado – It’s the state’s moral obligation,” Ecuadorian state legislator Miguel Carvajal told an audience at the National Assembly’s legislative Committee for Food Sovereignty this past summer. He was referring to the importance of supporting and protecting Ecuador’s small and medium-scale agricultural and livestock producers at a time when the Committee for Food Sovereignty was hosting a series of public forums in each province of Ecuador – an attempt to bring civil-society leaders, representatives of indigenous communities, agricultural associations, and trade unions together to debate a draft proposal for land reform in the country.

Ecuador’s land reform project, known as the Ley de Tierras Rurales y Territorios Ancestrales (Rural and Ancestral Land Law), aims to replace an earlier piece of land legislation, the Ley de Desarrollo Agrario (Agrarian Development Law), which was passed in 1994. In theory, the initiative would radically transform land tenure and property rights in the Andean country. As the consultation process between indigenous communities and the National Assembly concludes, the committee is reviewing the suggestions and critiques they have received. However, questions persist about when the proposal will be approved, as well as how – and if – the state will incorporate the diversity of demands put forth by participants and broader social movements.

Via Campesina, a transnational movement of peasant organizations and NGOs, first introduced the concept of food sovereignty at the 1996 World Food Summit. As the movement has long contended, food sovereignty represents an alternative to the food security paradigm. While food security affirms each person’s right to sustenance, food sovereignty goes a step further, seeking to also democratize access and control over resources like land, water, and seeds. The food sovereignty movement has been a vocal advocate of redistributive land reform in several countries of Latin America, while also championing a system of international exchange based on fair trade principles and democratized and decentralized food systems. Moreover, Via Campesina has long promoted agroecology, an ecosystem-based approach to managing agricultural systems that includes traditional forms of knowledge and practices. Each of these goals involves an overriding commitment to ethnic, racial, and gender equity. However, in practice, food sovereignty remains contentious and elusive, even as countries such as Venezuela, Bolivia, and Ecuador have made it a central feature of their own land redistribution projects.

In Ecuador, social activists have been key in institutionalizing the principles of food sovereignty. They successfully advocated for the concept’s inclusion in the country’s 2008 Constitution, for example, and activists helped transform the ideal into national law in 2009. Since then, the Ecuadorian government has created state agencies, organized legislative committees, and approved local ordinances with the goal of making food sovereignty a reality. Both national and international non-governmental organizations are also involved in promoting projects on food security, agroecology, and local food systems in the name of food sovereignty.

The concept has particular resonance in Ecuador as it’s often invoked as a means towards attaining Sumak Kawsay— a Kichwa indigenous cosmovision that translates roughly to Buen vivir, or “to live well.”  Buen vivir refers to an alternative framework of development focused on building a harmonistic and synergetic relationship between diverse peoples, nature, and local communities, based on principles of social justice as well as more participatory forms of democracy. In 2008, the notion was also incorporated into Ecuador’s Constitution.

Together, Sumak Kawsay and food sovereignty encapsulate a diverse set of demands and opportunities for bringing about alternative development policies and practices in Ecuador – and in Latin America, more broadly.  Indigenous and peasant-based movement organizations such as Coordinadora Campesina-Eloy Alfaro (CNC), CONAIE, Confederacíon Nacional de Organizaciones Campesinas, Indigenas y Negras (FENOCIN) and Federación Ecuatoriana de Indios (FEI) have employed food sovereignty and sumac kawsay initiatives to mobilize grassroots support to gain greater access and voice in the National Assembly. In the last three years, movement leaders have also attended meetings and debated with legislators. However, as Romelio Gualán, president of CNC-Eloy Alfaro has noted, many still worry that their participation will fall short once the land law is approved. Among the chief concerns of movements is what role— if any at all— indigenous communities and peasant associations will have in the implementation of the land law.

Thus far the most prominent way that food sovereignty advocates have been included in land negotiations in Ecuador has been through public hearings, known as the consulta pre-legislativa (pre-legislative consultation) process. Created in 2012 in accordance with Ecuador’s 1998 ratification of the International Labor Organization’s Convention 169, the consultation process encourages the participation of historically excluded communities— including indigenous, Afro-Ecuadorian, and Montubios (an ethnic minority in the Coast) — in writing laws that could impact their collective rights. The process was implemented most recently in the drafting of the country’s 2014 Water Law. It was also used to review the content of the land reform proposal and a new environmental law. To date, the Committee for Food Sovereignty has reported that at least 6,000 individuals and over 300 civil-society organizations and institutions have participated in the public forums to debate and discuss the issue of land reform. 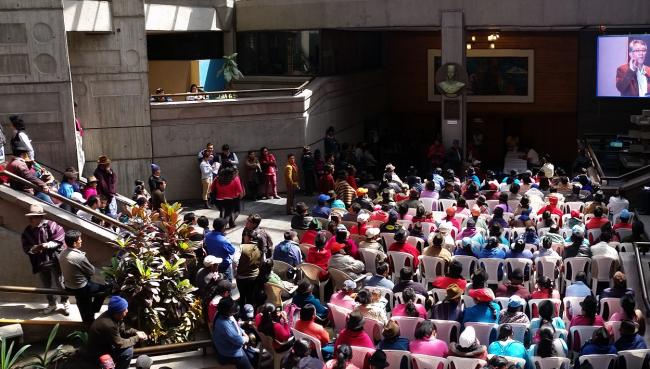 While many NGOs supported the consultation process, CONAIE, Ecuador’s indigenous confederation— boycotted the land reform’s consulta this year. They argued that their central demands for the 2014 Water Law were ignored, and thus were skeptical about the consultation process and the material impact that their participation would have.  In particular, CONAIE has argued that a requirement forcing organizations involved in the consulta to register with the state excluded certain groups from participating in the process altogether.

CONAIE’s refusal to participate explains the low participation numbers in forums that were held in the Amazonian region; there, forums included between fifty to hundred participants, a far cry from similar assemblies held in other regions of Ecuador, which often included several hundred attendees.

While several participants shared specific critiques of the land reform law, most participants of the forums shared their experiences with unequal and exploitative patterns of agrarian land ownership.  For example, at the public forum in Riobamba, in the highlands of Ecuador, over five hundred individuals attended, voicing their concerns in their native Kichwa language. Participants reflected on the legacies of the land tenancy systems of the mid-twentieth century, called huasipungos; they also articulated how and why previous agrarian reform efforts in the 1960s and 1970s had been so ineffective in equitably redistributing land. In Riobamba specifically, participants contended that many problems arise because wachifundios— small land holdings — do not qualify for state credits or subsidies.

On the northern coast of Esmeraldas province, in the town of San Lorenzo, a different narrative emerged. The participants of debates in San Lorenzo were concerned with the further expansion of African palm oil production, which has displaced hundreds of farmers and families from their ancestral territories. In the Amazon, meanwhile, participants expressed anxiety about how the state would protect the autonomy of indigenous communities as neo-extractivist development projects and urban zoning policies encroach on their access to communal lands.

In general, these public forums highlighted how the stakeholders in the consulta process have differing demands based on each region’s unique history and geography. This raises a major question for those advocating land reform in Ecuador— namely, will the initiative be able to win the support – and respond to the needs – of a socially and culturally heterogeneous agrarian landscape?

Despite the spectrum of concerns facing various communities in rural Ecuador, a common thread throughout the public forums was the demand for fairer land distribution. In Ecuador, land ownership is highly unequal: Land holdings larger than 500 hectares represent less than one percent of all properties, yet account for 18 percent of land ownership in the Highlands and in the Coast, and 12 percent in the Amazon. Through these public forums, citizens have made demands for a land reform project in which the state expropriates land and redistributes it to the landless, sets limits on the amount of land both nationals and foreigners could own, and expedites the process of land titling. As it currently stands, small landowners face significant obstacles as they seek access to land titles, which has often made it impossible for them to receive credits, subsidies, and state technical assistance.

In its current form, Ecuador’s land reform proposal seeks to decentralize the process of soliciting land titles to municipal governments, and would shorten the time it takes to file and receive land titles. Moreover, land left idle – and thus not serving its social or environmental function – would be subject to expropriation.

NGOs criticize the law for not including clauses that prohibit the use of genetically modified organisms or mechanisms that will empower communities to have greater autonomy in the implementation of land reform.  They also argue the draft, as it currently stands, opens the door to new land markets, the expansion of flower production in the Highlands, and banana production on the Coast.  Despite these tensions, however, there is growing consensus among organizations and the state that land reform is long overdue in Ecuador.

What remains unclear is how these broad and heterogeneous claims to land and territory can be translated into a national law. What role will community-based organizations play in making decisions over their local food systems? And what will happen to the large-scale agricultural export producers, if land reform advances? To date, the answer to these questions remain far from straightforward. The law is scheduled for approval in early 2016. The way that the state responds to civil society’s demands for reform will be instructive of the opportunities and challenges facing those who seek to turn the ideals of food sovereignty and Sumak Kawsay into public policy – be it in Ecuador or elsewhere in the region.

Karla Peña is a doctoral student in Development Sociology at Cornell University. Her work focuses on food sovereignty, agrarian change, and state-society relations in Ecuador.