This article was reprinted with permission from Jacobin. 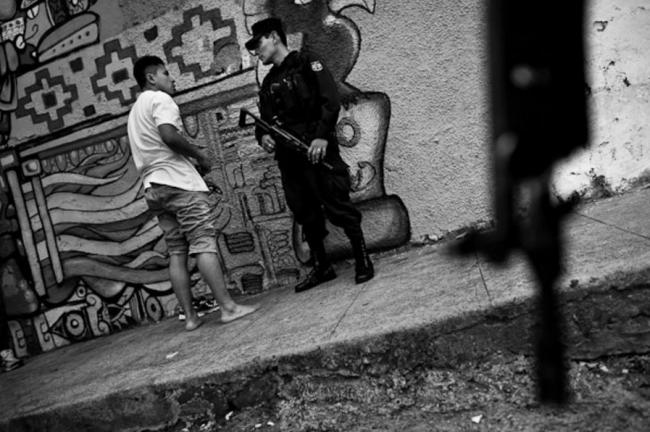 When the El Salvadoran government released its annual data on homicides earlier this month, the country received a dubious distinction: the Western Hemisphere’s bloodiest country. According to government statistics, more than 6,600 people were killed last year, rendering Central America’s smallest state the most violent country in the world not at war.

Most of the slaughter is linked — directly or indirectly — to the government’s fight against transnational gangs, and internecine conflicts between the gangs themselves. The effects are far reaching — beyond staggering body counts, the violence has contributed to a steadily building refugee crisis, increased violence against women, and a suffering economy.

Amid all this bad news, a smattering of hopeful stories has surfaced in the media. The articles tend to follow a common pattern, highlighting the potential for small businesses and internationally fostered public-private partnerships to lead El Salvador away from the brink of disaster.

The stories are certainly appealing: apparel factories that go out of their way to hire former gang members and put people to work; United Nations–sponsored development schemes that bring fresh water to rural communities; and multinational private investmentschemes that reduce poverty in targeted areas of El Salvador even as the rest of the country’s poor suffer under the weight of dramatic socioeconomic inequality.

It also isn’t surprising that market-based solutions to El Salvador’s problems are suddenly being showcased and advanced. State-based efforts to address the country’s problems, while mixed, have been largely counterproductive. The government has introduced a number of positive policies designed to alleviate stress on El Salvador’s most economically vulnerable people.

Its focus on providing opportunities to youth who otherwise might be tempted to enter lives of crime has been equally admirable. But these initiatives have been dramatically overshadowed by clumsy efforts to confront gang power head-on. Not only is the government not winning the war, it increasingly looks weak and indecisive.

These missteps notwithstanding, the faith in market-based solutions is dangerously misplaced. Capitalism isn’t going to save El Salvador.

Take the case of a garment factory in Ciudad Arce, a suburb of the country’s capital, San Salvador. The small factory — which makes sports apparel for a Pennsylvania company called League Collegiate Outfitters — has been profiled by major media outlets numerous times over the last several years. It’s clear why. The factory’s manager, Rodrigo Bolaños, has cultivated a reputation for hiring former gang members, the disabled, and other people who face difficulty finding a job, and the company trumpets its commitment to investing heavily in its workers.

As the New York Times reported in a recent profile, workers enjoy a wide variety of benefits: from English lessons and high school equivalency classes to subsidized services such as child care, medical attention, reduced-priced meals, and even loans for workers “who want to raise tilapia in tanks at home for extra income.” Taken together, there is a lot to feel good about.

But stories like these obscure a more complicated reality. A public radio feature on the factory, while praising many of the company’s programs to support its workers, pointed out that it effectively operates as a sweatshop. “Driving around the nearby neighborhood where he wants to employ all the graduating seniors . . . factory director Bolaños concedes that the jobs at the factory don’t pay much.”

What does this mean in real, material terms for Ciudad Arce workers? Are low wages actually the basis for sustainable development? In most of the stories that praise market-led development in El Salvador, these lines of inquiry are brushed aside or ignored. Instead, the last word on poor pay — low even by local standards — is given to Bolaños, who insists, unsurprisingly, that “the experience gives people the tools to be successful in life. That, he says, is how the gang situation will disappear from El Salvador.”

There are troubling concerns of political economy at play as well. Small businesses like the factory in Ciudad Arce are routinely subjected to gang extortion. Conventional wisdom holds that El Salvador’s gangs derive their power in great part from narcotrafficking.

While there’s no question the country’s gangs play their part in the regional drug trade, they rely chiefly on shaking down local businesses for revenue. Without an adequate public security environment, small businesses become easy prey for gangs that line their pockets with proceeds from protection rackets.

This is a troubling paradox: without a government that enjoys monopoly over the use of force, market development at the local level ends up strengthening the grip of the gangs.

At the same time, it isn’t clear that local business leaders are entirely victimized by their dealings with the gangs. Even as they pay the mandated protection tax, disturbing evidence suggests that in some cases local businesses partner with the gangs to keep employees from organizing and advocating for their rights. A report issued earlier this year by the Center for Global Workers’ Rights at Penn State University detailed apparent connections between local garment factories and the gangs.

“It is an increasingly common practice of Salvadoran employers to retain the services of gang members,” its authors argue, “when trying to eliminate the presence of independent union organizing.” The report details a number of incidents in which gangsters intimidated, threatened, and physically attacked workers attempting to secure their rights.

At the national and international level, highly touted public-private partnerships (PPPs) are equally questionable. On their face, PPPs are designed to attract foreign investment and include private actors as stakeholders in the provision of public goods. Supporters of public-private compacts point to a standard menu of intended benefits: market growth, job creation, and poverty reduction.

But critics contend these “partnerships” are nothing more than window dressing, concealing schemes to privatize public utilities and strip governments of their sovereign prerogatives. Far from helping communities in need, they argue, PPPs expose local resources to foreign exploitation and lock poor countries into relationships of conditionality with wealthier states. Access to aid, in turn, becomes contingent on market performance.

In El Salvador, a group called the Millennium Challenge Corporation(MCC) has been the major player in facilitating public-private partnerships. Created by the US Congress in 2004, the MCC fashions itself an independent foreign aid agency, operating above the political fray while providing assistance to developing countries in the form of five-year “compacts.”

The MCC’s activities in El Salvador initially focused heavily on the country’s northern region, but since securing a second compact with the government in 2014, the corporation has expanded into other areas. Wherever it operates, the focus stays the same: partnering with private enterprise to increase labor productivity and connect markets inside the country and across borders.

Writing for the Hill’s Congress Blog last year, MCC board member Susan McCue touted the corporation’s successes in El Salvador and outlined its approach. “When MCC invests in a country,” she explained, “it doesn’t simply write a check — it lays out clear expectations. In the case of El Salvador, that means a commitment from the government to work with the private sector to slash red tape and create public-private partnerships.”

According to McCue, her organization enjoys enthusiastic support not just from government officials and local elites, but from ordinary Salvadorans. “At a farm cooperative, workers talked about their gratitude to MCC for providing training and tools that allowed them to diversify into more lucrative crops.” These aren’t simply perceived improvements, McCue argues. “Poverty rates in Chalatenango — where a large portion of MCC’s investments were made — are down.”

What McCue’s glowing review omits is that the MCC actively coerced the government — apparently at Washington’s direction — to roll back a social welfare program targeting poor rural farmers, among other demands.

The program in question, a free seeds and fertilizer plan initiated by El Salvador’s previous president, was designed to prevent hundreds of thousands of subsistence farmers from experiencing food insecurity. Instead it was deemed in violation of the Central America Free Trade Agreement.

The MCC withheld hundreds of millions of development dollars — part of a second, successfully negotiated compact — until the government agreed to eliminate the subsidy and open local seeds markets to international competition.

Even supporters of PPPs were alarmed. As Oxfam noted at the time:

What is concerning about this scenario is that new, eleventh-hour conditions, unrelated to a compact’s content, risk interfering with the formula that served MCC and the Salvadoran people so well during the first compact . . .In fact, attaching new conditions after a compact has been negotiated and approved by the MCC board comes uncomfortably close to replicating the worst history of conditionality in development aid, where reforms aim mainly at donor interests, or become a box-checking exercise to release aid funds.

The MCC ultimately eased away from its demands following public protest, but the lesson was obvious enough: market-led development pits private profit against the public good, and tips the balance in favor of capital.

Is there a better way forward?

Across Latin America, countries are at an important juncture in their search for appropriate engines of growth. El Salvador is no exception, though its challenges are unique. Business wields enormous influence; the leftist government struggles to maintain power; and, as El Salvador’s 2015 murder rate suggests, insecurity is endemic. Beyond these basic issues, the government must contend with a wilted economy and figure out ways to put people to work.

How to accomplish this is a question without easy answers, but a state focused on guarding the needs of the many against the interests of a few would be a promising start. Free marketeering, however well intentioned or grassroots it may be, is not the solution.

Michael Busch is the senior editor at Warscapes magazine.