Embrace of the Serpent: Reframing the Colombian Amazon 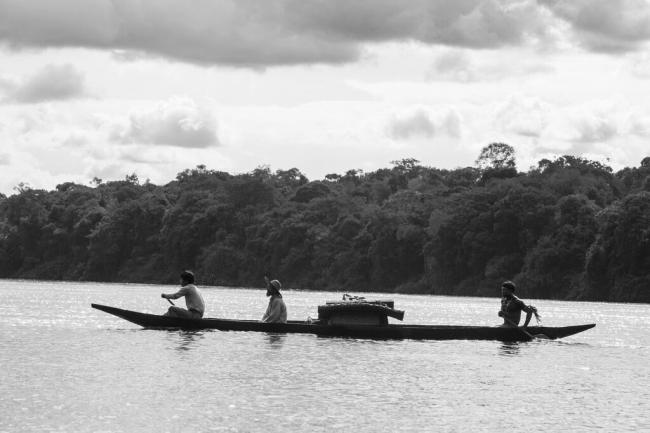 Embrace of the Serpent (El Abrazo de la Serpiente) opens with a wave, almost unperceivable in the water, washing up on the feet of Karamakate, the film’s indigenous protagonist. Karamakate holds a vigilant pose, seeking to protect himself from the oncoming danger. What he encounters, however, is a white man – an ethnographer – and his indigenous companion. The ethnographer, a German, is seeking help from Karamakate for a disease ravaging his body. Karamakate is the only one believed to possess the cure.

The ethnographer’s struggle for aid and knowledge, and the inherent threat of destruction lying therein, is at the heart of Colombian director Ciro Guerra’s cinematic masterpiece, the first Colombian film to be nominated for an Academy Award. Opening to rave reviews both in Colombia and internationally, Embrace of the Serpent comes at a moment of unprecedented historical reconciliation for Colombia, with a controversial peace agreement between the Colombian government and the Revolutionary Armed Forces of Colombia (FARC) on the horizon and dialogue between the government and Colombia’s other major guerrilla group, the National Liberation Front (ELN), recently announced. These efforts aim to bring an end to a bloody conflict whose underlying causes, many would contend, precede even the historical period depicted in the film.

Embrace of the Serpent’s major plot line chronicles Karamakate’s parallel journeys with two white scientists in the Amazon: the first recounts Theodor Koch Grundberg’s 1909 search for medicine while the second narrates a trip by U.S. biologist Richard Evans to the same part of the South American jungle in search of a sacred flower several decades later. The film is set in a critical moment in Colombian national history. With the bloody Thousand Day’s War (1899-1902) having just ended, foreigners and Colombians alike were just beginning to exploit the resource-rich Amazon for their economic benefit, with rubber barons, in particular, blazing a destructive path through the region. Our protagonists never encounter these barons throughout their journey; however, their marks are seen on the barks of trees stripped for their sap and, in one particularly harrowing moment, the mutilated, barely alive body of one of their indigenous workers. The race for resources eventually lead to the Peruvian-Colombian conflict (1932-1933), a moment that marks the generational shift between the first and second storylines of the film.

To play the role of young Karamakate, Ciro Guerra chose Nilbio Torres, an indigenous Cubeo man from the Vaupes department in southeast Colombia. His character is known as the “mover of the worlds,” and he symbolizes a vision of cultural “purity” and knowledge that is, correctly or incorrectly, often associated with the indigenous inhabitants of pre-contact Colombia. With an expertise in botany, and an almost uncanny understanding of the delicate balance of nature, young Karamakate seems to hold a wisdom far beyond his years. In the film, Karamakate’s home tribe has been entirely wiped out by rubber barons and Colombian frontier expansion, and so he agrees to help Theo (Jan Bijvoet) in exchange for his assistance in locating the last remaining survivors of his clan. Only they have the sacred flower that can be used to cure Theo’s disease. Tensions arise between Theo and Karamakate, but also between Karamakate and Manduca (Yaukenü Migue), Theo’s indigenous companion. Manduca dresses like a white man and Karamakate sees him as nothing more than a slave who has lost his culture and dignity. As the three journey down a winding river, each interaction is shaped by these tensions, at times violently.

Forty years later, Karamakate, old and still alone, encounters Richard Evans. “I dedicate my life to studying plants,” Evans tells Karamakate at one point, to which Karamakate replies: “That is the most sensible thing I’ve ever heard a white man say.” The subject of his study is the yakruna plant, the same one that Theo sought to cure his illness almost forty years prior. As if visited by a ghost from the past, Karamakate agrees to help Evans find the elusive flower. And so the two stories emerge as one, flowing down the same river, two generations apart.

Ciro Guerra expertly crafts the film down this winding river, moving back and forth between the journeys of Evans and Koch Grundberg. The two storylines echo each other as distorted mirrors. This back-and-forth movement between two generations is a reflection of the changes in Colombia itself, as the country evolves from a rural, Andean-oriented state, to a primary resource exporter and eventual manufacturing hub, evermore oriented toward foreign markets. Amidst these transformations, the indigenous inhabitants of the Amazon traded their knowledge and goods in order to either befriend or free themselves from white invaders.

Early in the film, when Theo and company stop to rest at the camp of another indigenous population down the river, they trade songs and dances for provisions. Upon their departure, Theo notices that his compass, which he had shown to the tribe during the night’s festivities, is missing. Theo discovers that the tribe’s leader stole the compass, and becomes furious when the leader refuses to return it to him. What motivates his anger about the incident is illuminating: if indigenous peoples get ahold of the tool, he argues, they will lose their ability to tell directions using the wind and the stars. Theo’s rationale comes across as naive to the tribes he encounters, and Karamakate’s response to the event is equally telling: “You can’t deny someone the right to knowledge,” he contends.

The strength in Guerra’s filmmaking comes in his unnerving examination of this statement. It seems that the white man’s knowledge, expressed through symbols like the compass and the characters of Theo and Evans, extracts the spirit, tradition, and humanity of the indigenous inhabitants much like rubber is extracted from the Amazonian rubber trees. Like a myth passed down from generation to generation, the film divides itself into various vignettes, each telling bite-sized stories of colonialism and empire.

The film’s finale might be its only point of weakness, given that its moral stance appears to diverge from the prior parables of the film. The rupture of form that can best be described as a 2001: a Space Odyssey-influenced, psychedelic montage falls into an aesthetic superfluity that seems disconnected from the two hours of film that precede it. In the concluding scenes, Richard Evans finally gets ahold of the coveted yakruna plant. Upon its consumption, he becomes ostensibly “enlightened,” represented in a montage of images of the universe, the forest, and its indigenous inhabitants. Evans awakens to find himself surrounded by butterflies, a motif first seen affecting the old Karamakate. Undoubtedly Guerra is trying to symbolize a transfer of knowledge and good will, but the moral falls flat, as some might take this to be a legitimization of the white man’s journey. This point stands in contrast to the sharp and often balanced criticisms that the film has been making from the start.

For Colombian viewers, in particular, the film may come as a revelation. In late 2015, Colombia saw the release of a nationally-funded, mega blockbuster called Colombia: Wild Magic (Colombia: Magia Salvaje). That film served to exhibit and romanticize Colombia’s natural environment. By contrast, The Embrace of the Serpent serves no pretensions about the jungle as a place of historical dearth. “I think nothing is less understood by a Colombian than the Amazon,” Guerra told the Colombian newspaper El Espectador in May 2015. For a country trying to stand on its own two feet after the longest-running armed conflict in the Americas, Embrace of the Serpent may signal the start of a new era of reflection about Colombian history, one which allows Colombians to finally come to terms with the complexities of that past on their own terms.

Nicolas Cadena is a recent graduate from New York University who double majored in Film & Television Production and Politics. He is currently spending a year in Bogotá studying at the Interdisciplinary Center for Development Studies of the University of the Andes.