Dilma's impeachment is a threat not only to democracy, but to the rights of Brazilian women. 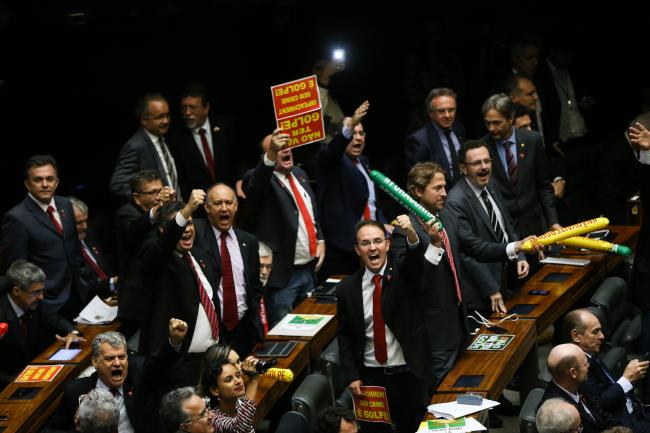 Editors' note: This morning, Thursday, May 12, 2016, the Brazilian Senate voted to approve an impeachment trial of Dilma Rousseff, who will now face a suspension of 180 days.

A verison of this piece was originally published at Brasil Wire. It is a chapter in an upcoming book about Brazil's 2016 coup.

On April 17, 2016 everyone across Brasil glued themselves to the television to watch Congress vote on the impeachment process against Partido das Trabalhadores (PT) president Dilma Rousseff. It was a historic moment, not just for the fragile Brasilian democracy that was installed in 1985, but also as one of the few opportunities for Brasilian citizens to watch the Congressmen they elected in 2014 on live TV.

Political polarization was at its highest in São Paulo, the city where I was born and live in to this day. As much as the capital of São Paulo state seems to be a cosmopolitan city with rich cultural diversity, it has a strong tradition of conservatism which still drinks from the fountain of the slavery era. Therefore, the state became one of the epicentres of right wing movements against the federal government since 2014 when they began to exclusively occupy Avenida Paulista, one of the most well-known streets in the city, during their protests.

For the first time in my life as a white, middle class woman with access to private schools, university and a steady job, I felt like a complete stranger in my home town. My friends, workmates and people who were against the impeachment were also tense. We weren’t welcome on Avenida Paulista anymore and many people now saw us as great traitors of the Homeland  for supporting the PT government.

During the beginning of the voting session in Congress, hearing the angry yells that echoed up the street calling Dilma a “slut”, I decided not to stay hidden away at home and to watch the voting downtown where there was a huge concentration of people in favour of the Federal Government.

Sitting in a plastic chair in one of many cheap bars in Anhangabaú Valley, 200 people and I gathered around a single TV to watch each Congressman vote. It was important to note who was around me: men and women of all colours, ages and levels of schooling that believed that, despite all of the shortcomings of the PT government, even with Rousseff’s rightward economic swing, she was re-elected with 54 million votes. Democracy was at stake on that day.

And it was worse than we imagined.

Around 5:30 PM, one of the first Congressmen walked up to the microphone to declare his vote. Abel Galinha, of the DEM party, began to yell words from the National Anthem. “Thou wilt see that a son of thine flees not from battle!… For all the Families in Roraima, my vote is yes for impeachment!”

We watched on TV as the plenary broke into commemoration. The images showed a sea of green and yellow on the streets, applauding and holding up signs that said, “Impeachment now!” On the other side of the TV, the red sea of men and women in front of me with their eyes glued to the TV yelled against it.  It was the beginning of Brasil's discovery of the economic interests that supported their congressmen.

The 513 Congressional seats are occupied in their majority by men. Only 45 members of Congress are women, one of the lowest indices in Latin America, meaning we are only represented at 9%. If we break it down further and see how the interests of black women are represented, the number is tiny. What we were presiding over, therefore, was a men’s day.

And it was they, the guardians of the traditional Christian Brasilian family, that exercised their domain over the session. The first Congresswoman to appear for voting, Shéridan de Anchieta, from the opposition PSDB party, was met with a chorus of, “gorgeous” and “princess” by the men who surrounded the stage. Even in politics, constitutionally elected, Congresswomen are mere decorative accessories.

The concept of “family” was amply used to by many congressmen to justify their votes in favour of the impeachment process. It was similar (if not equal) to what was used in 1964 in favour of the Military Coup. A type of Catholic justification that permeates political decisions in our country.

A few months earlier a Bill passed through this same Congress that aimed to define the concept of “family” in Brasil, ignoring that fact that the Federal Supreme Court officially recognized the stable union of homosexual couples in 2011.  The Congressmen from the religious bancada, in clear aversion to families composed of people of the same sex, defined that the only family recognized in this country would be that formed by a man, a woman and their children. This concept doesn’t just negate the existence of homo-afective families, but also those headed by single mothers or fathers. Since the first conception of the Brasilian people, this Catholic concept was never observed. The Portuguese colonists immediately adhered to cunhadismo, inherited from the Indians, that permitted polygamy and there also wasn’t a small number of children who were born as the result of rape.

And it went beyond that. Eduardo Cunha, sitting in the House presidential chair was an official defendant in the Federal Supreme Court for his involvement in the Petrolão scandal, as well as innumerable other bribery and embezzlement scandals going back to the 1990s. Cunha, who hides behind Christian morality and the protestors on Paulista Avenue who don’t understand they are being used as pawns, is one of the main enemies of women’s freedom.  One of his most notorious bills, which is still up for vote in Congress, is PL 5056/2013 which aims to make it harder for rape victims to have legal abortions.  Disgust with this bill generated positive reactions. The so-called “feminist spring” in Brasil reignited the feminist political movement across the entire country and became one of the main fronts against Cunha in the end of 2015. But on April 17, this didn’t matter.

Of the 45 Congresswomen, more than half voted against the impeachment. It was there that the difference in treatment from the Congressmen flared up. The Congresswomen who came up on stage were almost blocked from speaking because of the commotion on the House floor. Those who voted in favor were received with come-ons and those who voted against were loudly booed. One of the congresswomen asked for respect: “I already listened to you, now it’s my turn to speak.”

My anguish increased when Congressman Jair Bolsonaro dedicated his vote to Colonel Brilhante Ustra, a notorious torturer from the military dictatorship era who was known for putting rats in women’s vaginas. Bolsonaro, the Congressmen with the largest number of votes from Rio de Janeiro, is a known homophobe, racist and misogynist and he didn’t hold back from reminding us that Colonel Ustra was the “Terror of Dilma," since he had tortured her in 1970. Bolsonaro generated so much repulsion that Jean Wyllys, the only openly gay Congressman and a supporter of LGBTQ rights, spat on him in a gesture that was only noted after the voting ended.

As if that wasn't enough, next, Pedro Paulo got up on the microphone to vote in favour of impeachment. Pedro Paulo, while running to become Mayor of Rio de Janeiro, had beaten his wife and demanded that she make a public apology for being the victim of domestic violence.

The votes and macho attitudes of the congressmen hid political giants like Luiza Erundina, Maria do Rosário and Benedita da Silva, who fulfill their solitary mandates in a sea of men who work in favor of their own interests: bullets, bibles and beef.

These congressmen regularly evoke somber times in Brasil. Times when powerful clans  worked in favour of the minority that concentrated a great part of the Brazilian income. In addition to voting in favour of their families, two congressmen made a point to bring their son on stage to inform everyone that he would be that political family’s next generation in politics.

As we watched the proceedings, the women sitting beside me began to express their worries. Many of them were young, some from Brazil's underserved Northeast, who managed to enter university through the federal government’s social programs. For them, defeat for the PT government will mean moving several steps backwards in relation to their late victories for rights. For these women, it is a political act to enter universities and demand better jobs, a contrast to my own privileged position.

I looked at these women who talked among themselves and the men on the TV who voted in favour of the "family." For the first time I saw the face of Catholic hypocrisy in Brasil clearly. These same men who secretly finance the luxury prostitution industry in Brasil are openly against regulations for sex workers. These same men defend their children but don’t allow the public schools to teach sex education and don’t allow family planning programs. They are the same men who are against the right to abortion even knowing that 1 million clandestine abortions per year happen in this country and that one of the biggest causes of maternal mortality is due to complications from irregular abortions. It is a type of prohibition that most kills poor, young and black women who can’t afford a secure procedure to interrupt their pregnancies.

We are the women who are attacked as crazy, whores and abortioners by these illustrious men of April 17. On that date, the Day of Men, we observed a legislative house that does not represent us, that prefers that we stay taciturn and quiet so that they can govern the way they want to. I didn’t have the stomach to watch until the end of the voting. When the number hit 2/3 in favor of impeachment, a woman sitting nearby lit a cigarette and, with tears running down her face, decided to go home. The screams of “Dilma you slut” could be heard filling the streets.

Marie Declercq was born and lives in São Paulo. She has a degree in law and currently works as a journalist for Vice Brasil, where she writes about sexuality, subcultures and feminism.