At Georgia's Freedom University, undocumented students fight to make higher education a human right for all. 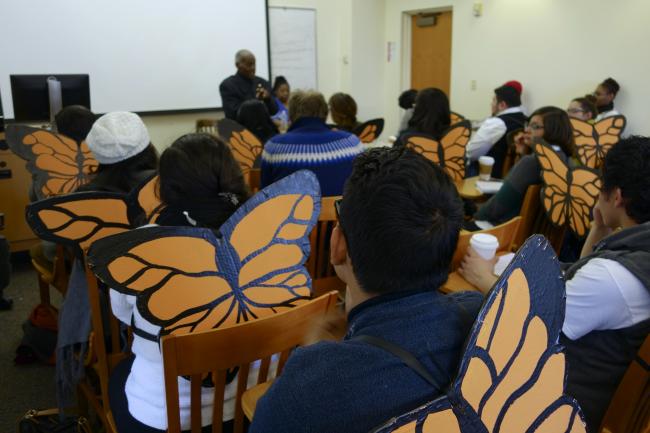 The following article comes from the "Report" section of latest issue of the NACLA Report on the Americas, "Solidarity Pa' Siempre!"

In the spring of 2010, a student at the Atlanta-area Kennesaw State University was pulled over by the Cobb County police for “impeding the flow of traffic” and was discovered to be driving without a license. The location was, if anything, overdetermined: Cobb County, which was once represented in Congress by a member of the John Birch Society, gave the country Newt Gingrich in 1994, even as it vied with two other aerospace hubs for the title of most federally-subsidized county in the nation. Over the years, Cobb County has passed resolutions condemning the “homosexual lifestyle,” cut off funding to the arts as insufficiently supportive of Christian family values, and declined to participate in the Metro Atlanta Rapid Transit Authority system (too black) and the 1996 Olympics (too gay).

it was only fitting that the case of Jessica Colotl, who emigrated to the U.S. from Mexico with her parents at about age ten, became Cobb's latest contribution to national debate. The arresting officers had been empowered to investigate immigration status by the notorious 287(g) provision of the Immigration and Nationality Act, through which Immigration and Customs Enforcement (or ICE, to use its Top Gun-style acronym) can delegate its authority to the same local police forces that have proved lethally incapable of administering race-blind justice to fully documented citizens. Colotl was sent to a detention center in Alabama for thirty-five days to await deportation. As her case made state and then national news, the main Cobb County paper raised the familiar lament of the subsidized white suburbanite: “[D]eserving Georgians are being turned away from attending KSU while illegal, undocumented, ineligible-by-law people are being admitted and then given special treatment along the way.” When the Georgia legislature moved with uncharacteristic dispatch to follow South Carolina's example of a statutory ban on undocumented student enrollment in public higher education, the University Systems’ Board of Regents got out front by investigating every student in the entire 35-campus system. Their zealous efforts uncovered 501 undocumented students, all of whom were actually subsidizing their Georgia peers by paying out-of-state tuition rates.

Undeterred, the Board of Regents proceeded in the fall of 2010 to ban undocumented students from the top five state campuses. Close on the heels of this administrative pre-emption came a flurry of anti-immigrant legislation from the capitol, and the governor's appointment of seven white men—including an avowed white supremacist—to an “Immigration Enforcement Review Board.” These aggressive moves were met by thousands of undocumented Georgians protesting in the streets and organizing new alliances. Among those arrested over the course of 2011 were seven student activists who sat down to stop traffic on Martin Luther King, Jr. Drive near Georgia State University and, risking immediate deportation, demanded that the five campuses refuse to comply with the ban. Georgia's Representative John L. Lewis, who was beaten bloody on the Pettus Bridge in Selma in 1965 and arrested over forty times defying white supremacy, applauded their efforts.

Following these demonstrations, four of us on the faculty at the University of Georgia in Athens—one of the campuses to which these students no longer had access—asked Keish Kim and Georgina Perez, two leaders of the Georgia Undocumented Youth Alliance (GUYA), what others should be doing to support their efforts. Their top priority, they told us, was to be in a college classroom while they advanced state and national movements that tied undocumented students’ demands for in-state tuition and admission policies to the overall degradation of public higher education: declining public funding, metastasizing administration, rising tuition and fees, contracting financial aid, and burgeoning student debt.

In response, we decided to open that college classroom and to team up with veteran campus and community activists to tackle security issues and the critical reproductive labor of transportation, food, and fundraising. To garner academic support for the classroom the students wanted to occupy, we recruited a national board of advisors from among our out-of-state colleagues in Latin@ Studies, African American Studies, Latin American Studies, American Studies, and our own home disciplines of History and Romance Languages, and designed a team-taught interdisciplinary syllabus in “American Civilization.” The resulting weekly 3-hour seminar for 35 students from around the state got underway in the fall of 2011. The collaborative project Freedom University Georgia, or FU Georgia, was born.

The kick-off for Freedom U was a commemoration of the desegregation of the University of Georgia fifty years before, in the face of violent white resistance. To prepare for the event, Atlanta-based GUYA offered a workshop in a local Athens Latino community center; Perez opened the gathering by gently ushering out two groups: everyone over thirty and U.S. citizens. Hours later, the once isolated students emerged with flyers, new Facebook friends, petitions, and clipboards, determined activists. Athens high schoolers Leidy Solis, Alejandro Galeana Salinas, and Aldo Mendoza were among the group, and, after extensive turnout work, several weeks later they led what they called a “Graduation of Resistance.”

At the event, GUYA activist Gustavo Madrigal-Piña tackled the criminalization of immigrants head on in a visceral homage to his parents, who had risked their lives to get the family out of intractable poverty; he then urged those in attendance to usher in a new day “by any means necessary,” and the multitude descended on the UGA admissions office to request applications.1Circling back from the imposing brick building, students signed up for FU at our rickety card table with a homemade FU Georgia banner. Lacking any resources or institutional base, Freedom University has for five years now occupied classrooms in Athens and Atlanta for an intensive afternoon of classes every Sunday. It has lived like some experimental hydroponic plant, thriving on pure solidarity—or, in Diane Nelson's more thoughtful term, “fluidarity,” the practices of support that recognize their own compromised motives, yet refuse to use them as an excuse to sit this one out.