Latin Americanists Say “No” to the Coup in Brazil

Members of the Latin American Studies Association (LASA) protest the ouster of Dilma Rousseff—and the political figures in Brazil who enabled it. 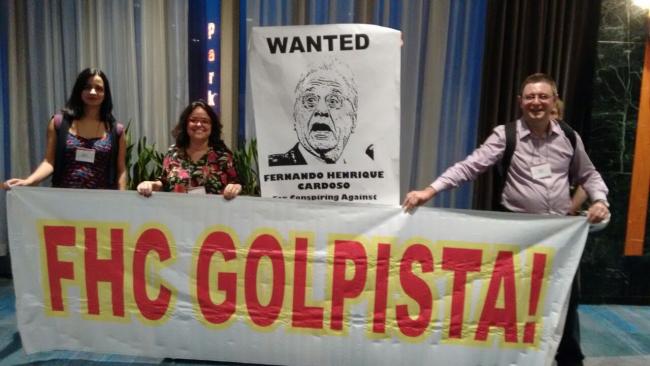 A version of this piece was originally published in Portuguese at Jornal GGN.

The Latin American Studies Association (LASA), the world’s largest academic organization dedicated to the region, held its annual congress recently in New York City, commemorating the association’s fiftieth anniversary. The event was marked by protests by hundreds of researchers, who took a public stand against the coup currently underway in Brazil where the country’s democratically-elected president Dilma Rousseff has been removed from power on legally spurious grounds by her political opponents who themselves are under investigation for serious forms of corruption.

The wave of protests at the LASA congress came at the confluence of several different initiatives. As the impeachment process in Brazil began to take shape in mid-March, an international group of researchers began to strategize about how to activate their personal and professional networks and initiate intellectual collaborations in defense of democracy in Brazil. We began to consider how to make use of the immense gathering about to take place for the LASA congress in order to add our own efforts to those already being undertaken by academics, labor unions, jurists, artists, and others in Brazil and elsewhere. In April, Mariana Kalil, a doctoral student in International Relations at the University of Brasília, gathered 162 signatures from LASA members (along with 337 signatures of non-members) in a petition that called for LASA to remove Brazil’s former president, Fernando Henrique Cardoso, from a session on which he was scheduled to appear (alongside the former Chilean president Ricardo Lagos), entitled “Fifty Years of Democracy and its Discontents in Latin America.” The petition argued that the former president and the political party of which he is a leader, the PSDB, “have not hesitated to jeopardize domestic peace nor [sic] democracy’s most basic mechanisms such as the constitution.”

The LASA leadership responded by explaining that Cardoso, an academic sociologist before entering politics, had been invited because of his contributions to intellectual production in the region, and because of the conference’s retrospective theme, “LASA at 50.” Later, tacitly validating Cardoso’s critics, LASA adjusted the title of the panel to “Fifty years of Latin American Public Life: The Challenges of Politics, Scholarship, and History.” At the same time, although the conference program had been established months earlier and was already in press, the leadership of the association agreed to allow us to create a new panel, “Dialogue on the Political Crisis in Brazil / Diálogos sobre a crise política no Brasil.”

During the meeting of LASA’s Executive Council on Thursday, May 26, the day before the conference was to begin, a proposed Emergency Resolution denouncing the anti-democratic, casuistic, and arbitrary nature of Dilma Rousseff’s impeachment—and the dangerous precedents that it establishes throughout the region—was approved by an overwhelming majority vote. The entire LASA membership is currently in the process of voting on whether the association will adopt the Resolution. Meanwhile, CLACSO (Consejo Latinoamericano de Ciencias Sociales) published an open letter criticizing the invitation extended to Cardoso to speak at the congress, urging all members of LASA to denounce the coup in Brazil and announcing a series of protests against the coup to take place over the course of the four-day congress. The week before the congress, João Feres Júnior also published an article, which raised important issues about the political crisis in Brazil, as reflected in the LASA program. The article found its way into various digital media outlets. Feres called attention to the pattern of public statements that Cardoso had been making since 2014, which contributed to the production of a narrative designed to legitimate this juridically baseless impeachment process, even before it had officially begun.

It was in this context that Cardoso, on the eve of the congress, announced the cancelation of his participation in the event. In an open letter sent to LASA, Cardoso dismissed his critics and the legitimacy of their political position, calling them “radical minds” who confused scientific inquiry with activism—even while the former president alluded to the repression that he, himself, had suffered under Brazil’s military dictatorship in order to establish his pro-democracy credentials.  At the same time, Cardoso attempted to justify his position in favor of the impeachment of President Rousseff with a hypocritical “anti-corruption” diatribe that echoed the discourse that has been appearing in the popular Brazilian news magazine Veja, a publication that has been notoriously biased against both Rousseff’s Workers’ Party (PT) government and that of her predecessor, Luiz Inácio Lula da Silva. Tellingly, like many of the politicians who cast their pro-impeachment votes in both houses of the Brazilian federal legislature in mid-April and mid-May, Cardoso’s retort lacked even a single reference to the actual allegations of wrongdoing that led to Rousseff’s removal from office.

Cardoso’s public confession of his inability to confront these contradictions between his self-image as a supporter of democracy and his support of Rousseff’s removal from office, made before more than six thousand scholars and students of Latin America convened in New York, helped to consolidate the perception that what Brazil is now facing is indeed a coup d’état. It became also evident to many that the several activities scheduled for Cardoso’s visit to the United States—including attendance at LASA’s fundraising dinner at the United Nations headquarters and a trip to Cambridge, Massachusetts, to receive an honorary doctorate from Harvard Law School—would, from his perspective, have been useful to consolidate his academic prestige and suppress the growing sense in the international community that the legitimacy of acting President Michel Temer’s provisional government had to be questioned.

At the congress’s opening ceremony on Friday evening, May 27, Gil Joseph, the president of LASA and a professor of history at Yale University who specializes in Mexico, got onto the stage holding aloft a t-shirt with the words “No to the Coup” printed on it in the three official languages of the association: Portuguese, Spanish, and English. He draped the t-shirt on the podium and then began his opening remarks. Although the speech that opens an academic conference tends to be just a formality to welcome the attendees, with little or no substantive content, Joseph dedicated the first ten minutes of his time to the situation in Brazil. Alluding to the t-shirt and its message, he said to the audience, “We understand why you're wearing these camisetas to protest the slow-motion destruction of democracy that increasingly, with each day's astonishing revelations, appears to all the world as something resembling a coup.” In the course of the four days of the LASA conference, various demonstrations took place. The hundreds of t-shirts, printed with “No to the Coup” on one side and “Brasil—La Democracia de Luto (“Brazil—Democracy in Mourning”) on the other, distributed by CLACSO, together with the banners and posters printed by the New York-based activist group, Defend Democracy in Brazil, created the tableau against which the thousands of LASA attendees moved through the Midtown hotel where the conference was held. A booth dedicated to the organized protest against the impeachment was set up in the book exhibit, allowing members to inform themselves about the crisis in Brazil as they browsed the latest publications on display. Brazil’s alternative media collective, Mídia Ninja, along with the video cameras in participants’ handheld devices, recorded the chants, protest songs, and the Brazilianist scholar James N. Green’s public reading of the text of the Emergency Resolution against the impeachment.

On Monday, the final day of the conference, the anticipated and very well attended panel on the crisis in Brazil took place. Luiz Carlos Bresser-Pereira, founder of the PSDB and an ex-minister under President Cardoso, came to a clear conclusion, by way of an exhaustive analysis of the economic dimensions of the crisis. What has occurred in Brazil is a “parliamentary coup,” Bresser-Pereira argued, and that coup has been generated by sectors of Brazilian society that control the country’s wealth and who seek to end the recent cycle of social development and redistribution brought about in Brazil though four PT presidential administrations. Adalberto Cardoso of IESP-UERJ (the state university of Rio de Janeiro), alerted the audience to the fact that the coup should be seen as an attempt to destroy not only the PT but also the social rights established in the 1988 Constitution, a political project that will encounter wide resistance, and which therefore will entail an increase in state repression. Helcimara Telles, from UFMG (the state university of Minas Gerais), shocked the Latin Americanists from various parts of the world sitting in the audience by explaining the role that misogyny is playing in fomenting political “hatred”—a phenomenon that is strikingly exemplified in the stickers affixed to the opening of the fuel tanks of automobiles, such that filling one’s gas tank simulates the rape of President Rousseff.

A combination of activism and scientific study always displeases defenders of the status quo. It is worth remembering, however, that the term “intellectual” entered into our contemporary Western vocabulary when Émile Zola, in the face of the revelations of anti-Semitism that marked the trial of Alfred Dreyfus in 1895, had the moral courage to address the President of France in an article entitled, “I accuse!” In the same fashion, we, as researchers dedicated to understanding the Latin American reality, “accuse”; we insist a coup d’état is occurring in Brazil. And no one will silence our consciences before the ethical imperative to denounce it.

Alexandre Fortes is a professor of history and Dean of the Multidisciplinary Institute at Universidade Federal Rural do Rio de Janeiro in Nova Iguaçu, Brazil. He is a former editor of Revista Brasileira de História, published by the Brazilian History Association and is a former visiting professor at Duke University.

Amy Chazkel teaches Latin American history at the City University of New York, Queens College and the Graduate Center. She is the author of Laws of Chance: Brazil's Clandestine Lottery and the Making of Urban Public Life (Duke University Press, 2011) and co-editor of The Rio de Janeiro Reader: History, Culture, Politics (Duke University Press, 2016). She is also a member of the Radical History Review Editorial Collective.