Who Lives, Who Dies, Who Tells our Stories

“Look around, look around, at how lucky we are to be alive right now!” 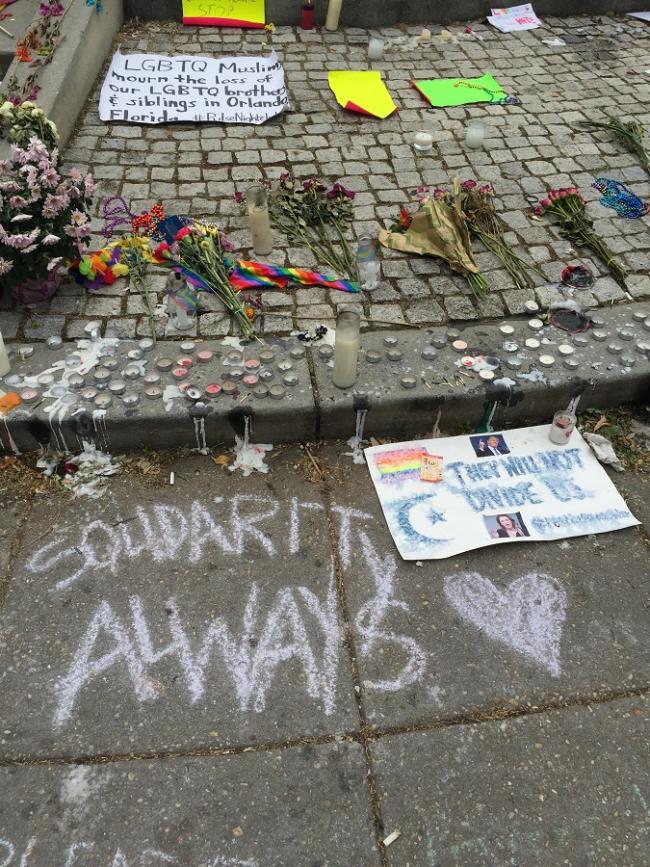 Like plenty of my friends looking for an escapist respite from the unspeakable shock and horror at the slaughter at Pulse, an LGBT nightclub in Orlando – 49 murdered by the gunman, 53 more hospitalized – I tuned into the Tonys to watch Hamilton’s triumphant evening. As the show-stopper wound down, I suddenly heard an entirely new meaning in the song’s refrain. "How lucky we are to be alive right now," indeed.

As Hamilton is Nuyorican Miranda’s hip-hop love song to both the Caribbean-born forgotten Founding Father and to more recent generations of immigrants, so too was the massacre on Latin Night at Pulse an immigrant story – and a reminder that America, at its heart, is an immigrant story.

As the names – almost all reflecting Latinx heritage –trickled in, the authorities notifying the next-of-kin, I could only wonder how many of the victims were outed by their deaths, and how many families are suddenly dealing with the grief of a loved one murdered while also learning for the first time of their beloved’s queerness.

Few narratives are as central to American culture as that of the endless opportunities offered to newcomers, where “no matter how humble our origins, we can make it if we try… as long as we stay, just like our country, young, scrappy, and hungry,” as Barack and Michelle Obama reminded Tony viewers, riffing on Miranda’s lyrics as they introduced “Yorktown (The World Turned Upside Down)” earlier in the awards show.

Perhaps the line in the musical that gets the greatest applause comes from “Yorktown,” when Miranda as Alexander Hamilton and Daveed Diggs as the Marquis de Lafayette together declare, “immigrants – we get the job done!”

That applause is a rebuke to the nativist hatred surging in recent years – rhetoric and violence aimed at Latinx and Muslim immigrants, or anyone perceived as such. This violence is concurrent with an escalation in hate crimes against LGBT Americans, most notably the murders of more than two dozen transgender women – mostly African American and Latina – over the last year and a half.

Indeed, when I woke on Sunday, trying to shake off my sleep and make sense of the horrific news coming out of Orlando, I expected that we’d soon learn that the murderer would turn out to be a white supremacist. In this age when reactionary politicians are unapologetically appealing to this country’s darkest instincts – when a major political party has nominated a candidate openly running on Islamophobia and anti-Mexican prejudice, when the anti-LGBT backlash to last year’s marriage equality ruling is growing more and more violent – it’s scarily easy to imagine that an LGBT bar on Latin Night would attract the attention of a Timothy McVeigh wannabe.

Instead, the news soon came that the perpetrator was Omar Mateen, the New York City-born son of an immigrant from Afghanistan, with a long history of spousal abuse, stalking, homophobia, and mental instability.  So too is the murder’s story an immigrant story, a classic American story.

Infuriatingly if unsurprisingly, the media coverage of Orlando has emphasized Mateen’s call to 911 at the beginning of his attack on the nightclub, wherein he declared his allegiance to the so-called Islamic State. In rushing to condemn this act of domestic terrorism, conservative politicians have fallen over themselves to erase the homophobia that drove Mateen to target LGBT people for slaughter and instead fan the flames of Islamophobia. This despite the fact that Mateen’s own father attributed to the violence to homophobia, not religious extremism, explaining how Omar Mateen had recently witnessed two men kissing in Miami and was enraged that his three-year-old son had also seen the kiss.

In considering the stories Americans tell about ourselves, it’s all too convenient to forget that we have a deeply embedded history of religious extremism dating back to the Puritans. It’s also too easy to forget that we still need works like Hamilton that continually reinterpret “the American experiment,” because we have come through two centuries of discrimination and hatred directed against immigrants, be they Irish, Chinese, Italian, Jewish, Russian, Japanese, Mexican, South Asian, or Middle Eastern.

Indeed, as U.S. culture has increasingly treated LGBT people as a quasi-ethnicity – a rainbow in the American mosaic, one more group with its colorful parades, its traditional clothing and customs – we might be well advised to think more carefully about the queer politics of nativism.

Given Omar Mateen’s background, the appeals of the Islamic State were likely more culturally legible to him than other violent ideologies that warp other religious traditions. But looking at the myriad extremist movements around the world grounded in religious or racial purity, the common thread connecting them all is a toxic masculinity that condones – or even encourages – violence against women and LGBT people. ISIS’s rhetoric may have given form to Omar Mateen’s misogyny and homophobia, but it did not create it, and his lethal decisions fit all too well into an American narrative we’d rather not hear.

Since I first drafted this essay, reports have emerged suggesting that Mateen messaged other men on gay hookup apps such as Grindr, and that he regularly attended Pulse before the night of the massacre. Whether Mateen was a deeply closeted, profoundly tormented gay or bisexual man, or whether he was a heterosexual predator stalking his prey, such reports further reinforce how toxic masculinity explains his actions far more convincingly than religious fanaticism.

In the wake of the tragedy at Pulse, perhaps U.S. law enforcement agencies will start paying more attention to the red flags of domestic violence and homophobia that were abundantly evident in the case of Omar Mateen (disclosure: I’m not holding my breath).

We are still reeling from the gut-punch of the Orlando massacre – though Hamilton’s friend, the tailor-spy Hercules Mulligan speaks for many of us when he declares, “when you knock me down, I get the fuck back up again!” We are indeed lucky to be alive right now, not just because it could have been us in the crosshairs of homophobia, but because we have the opportunity to tell new stories, grounded in the politics of solidarity, where toxic masculinity, gun violence, and hatred have no place in our society.

Ian Lekus is an LGBT Thematic Specialist for Amnesty International USA. He received his BA in History from Cornell University and his PhD in History from Duke University, and is currently completing his first book, Queer and Present Dangers: Sexuality, Masculinity, and the Sixties, with the University of North Carolina Press. He also serves on the Advisory Board of the Sexuality, Gender, and Human Rights Program at the Harvard Kennedy School’s Carr Center for Human Rights. Dr. Lekus has been an activist with a broad range of LGBT, HIV/AIDS, and social justice groups for more than twenty years.