A revitalized political Left in Peru helped prevent the return of Fujimorismo, but it must now contend with the neoliberal economic agenda of the country’s new president. 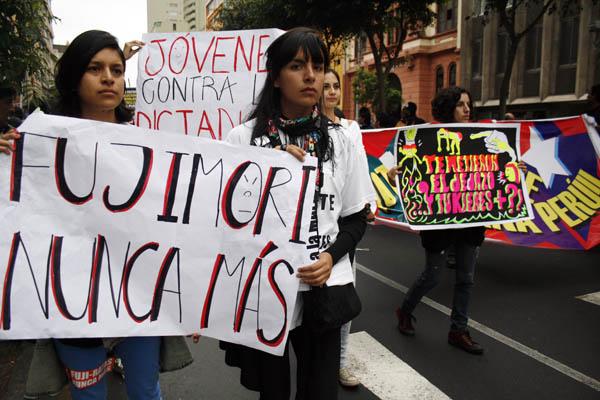 From the time they voted on June 5th, until Thursday, June 9th, Peruvians waited eagerly to find out the results of their country’s run-off election for president. The vote ended up being one of the closest—and arguably one of the most contentious—presidential races in the country’s history. In the end, Peruanos por el Kambio candidate Pedro Pablo Kuczynski, a 77-year-old former World Bank economist who is better known in the country as PPK, beat fellow right-wing candidate Keiko Fujimori of Fuerza Popular by a mere quarter of one percent, or about 41 thousand votes out of 18 million votes cast. Peruvians at home watched as the final ballots trickled in from Peruvians living abroad and in far-flung villages, adding more drama to an unpredictable race.

What made this election so close, however, was not the political positions of the run-off election candidates—both candidates ran on pro-business, neoliberal political platforms. Rather, Kuczynski’s triumph over Fujimori was, ironically, the result of a newly strengthened Peruvian Left, and the formation of a coalition that linked progressive urban sectors with increasingly organized resistance to mining and rights violations in the country’s largely indigenous rural provinces.

Despite the fact that he is Peru’s first president of Jewish ancestry, PPK’s credentials hardly represent a rupture with Peru’s political and economic establishment.  Kuczynski was the Minister of Energy and Mines under President Fernando Belaunde in the early 1980s. In 2000, he also served as Minster of the Economy in the administration of another former World Bank economist, Alejandro Toledo. As an investment banker and proponent of the Trans-Pacific Partnership (TPP), Kuczynski is unlikely to challenge the Washington Consensus or the free trade pacts Peru has signed over the last decade. In a country where the vast majority of citizens are mestizo and indigenous, Kuczynski, who speaks Spanish with a foreign accent, in many ways represents the light-skinned, pro-business technocrats of European origin that have long held elite positions and political power, especially in the coastal capital of Lima.

Given this background, it is tempting to see Kuczynski’s victory as a sign of Peruvians continued adherence to privatization and free-market policies begun in the 1990s.  Between 2005 and 2012, a sudden rise in commodity exports and foreign investment made Peru one of the fastest growing economies in Latin America. This growth, dubbed the “Peruvian Miracle,” alleviated some of Peru’s poverty. However, critics have observed that this economic success did little to change entrenched problems of income and social inequality. A sharp drop in commodity prices has since diluted Peru’s period of healthy growth, as well as the country’s triumphant feeling of economic prosperity. The current government’s efforts to revive the economy after the commodity downturn have only deepened inequalities, as a report published by Oxfam in 2015 recently noted. In addition, the government’s attempts to attract and keep foreign investment have conflicted with “prior consultation” (consulta previa) laws that grant indigenous peoples the legal—though not always observed—right to be included in decisions about what kinds of industrial development and ecological destruction happens on or near their homelands.

In the lead up to the 2016 presidential elections, many Peruvians channeled their frustrations regarding the country’s economic decline and the persistence of policies that cede control over natural resources to foreign investors into the alternative platform of the young leftist presidential candidate Veronika Mendoza and her Frente Amplio political party. Known for her support of anti-mining protesters in her home department of Cusco, and her use of Quechua, Mendoza’s campaign quickly came to represent a new leftist, pro-indigenous, anti-privatization alternative to the status quo in Peru. Mendoza pledged to combat inequality, reform the constitution, defend the environment and limit the power of multinational corporations. Because of this, both social movements and many human rights groups in Peru publicly backed Mendoza’s candidacy ahead of the country’s first-round vote. The disqualification of several candidates shortly before that vote, left Kuczynski and Mendoza in a dead heat for second. In the end, Kuczynski, playing on fears that Peru could return to the hyperinflation of the 1980s, beat out Mendoza by less than two percentage points to secure a place in the runoff. Meanwhile, Keiko Fujimori cruised to a relatively easy first round win. Fujimori’s victory, however, would prove short-lived.

Analysts have described the major conflict in this year’s presidential election as one between fujimorismo and anti-fujimorismo. As the daughter of former populist president Alberto Fujimori, Keiko Fujimori represents fujimorismo: a continuation of her father’s strong security state and anti-terrorism policies and promotion of privitization and business interests. Despite the fact that Alberto Fujimori is now serving a 25 year prison sentence for kidnapping, torture and other crimes, roughly half the population, many of them in the poorest sectors of the country, see fujimorismo as the only way to secure the economy, fight crime, and contain guerilla groups such as the Shining Path. Opponents of fujimorismo, argued that a Keiko Fujimori presidency would mean a return to dictatorial leadership and censorship of the press, while also reestablishing state ties to drug trafficking and corruption in the highest levels of the government.

While anti-fujimorismo has been around as long as the disgraced former president, it has struggled to coalesce into an organized national movement. This began to change in recent months. During the elections, diverse sectors of anti-fujimoristas—students, artists, and human rights activists, as well as civil groups that were targeted by Fujimori’s regime (many of them located far from the Lima center)--organized protest marches that drew tens of thousands to the streets. Together, these groups declared “No to Keiko” in cities across the country. Among the crowds were citizens who were secretly sterilized against their will as part of a population control project targeting poor and indigenous women in the 1990s, as well as groups like Alfombra Roja (Red Carpet), an activist collective that does political performances in public spaces to provoke discussion about reproductive and other rights for women in Peru. These protesters networked through new Facebook groups dedicated to defeating Keiko’s candidacy. And in an unusual bipartisan move, Mendoza’s Frente Amplio party, which had received the early support of many of these groups, even ended up endorsing Kuczynski ahead of the country’s second-round vote, urging members to cast votes for the candidate in order to stop the return of fujimorismo.  There is no doubt that Kuczynski would have lost the election without this timely alliance between the left-leaning Frente Amplio and other anti-fujimorista activists across the nation.

Beyond the fact that these openly leftist “No a Keiko” protests helped put a conservative businessman in office, the social effervescence that emerged in recent months was surprising for several reasons. For one, it showed that young urban activists are increasingly including the political agendas of rural and indigenous people. This included not just provincial groups that were affected by environmental pollution from extractive industries, but also those demanding the rights of indigenous peoples in the country’s former war zone be protected. (Many of these groups have also advocated for reparations for the political violence and state abuse committed during the state's war against the Shining Path.) The election protests might be a measure of the growing importance of advocacy networks the connect a new generation of students and activists in the capital with provincial citizens that have little recourse to state aid.  Additionally, while Frente Amplio lost the presidential election, it won 20 percent of the seats in Congress.  This marks the first time in the past three decades that a strong, Left coalition has been voted into Peru’s National Congress.  At the present moment, however, it remains difficult to predict if the momentum gained by Frente Amplio will continue into the next presidential election.

In terms of the presidential future of PPK, analysts have noted that the new president will be walking a political tightrope, in no small part because of the movements that propelled him to office. Many wonder how he will be able to govern. On one side, PPK is flanked by the left-wing movement that begrudgingly supported him as a form of protest against Fujimori. This group is wary of PPK’s support for neoliberal policies, and the movements that comprise Peru's newly emergent Left have proven themselves to be savvy satirists and social media users. They are likely to organize protests against Kuczynski, should he pursue his planned economic agenda. While former candidate Veronika Mendoza has promised to be a constructive critic and “not to obstruct” the new president’s policies in Congress, this alliance presumes that PPK will fulfill compromises he has made to her party regarding the environment and the investigation of fujimoristas who are facing charges of corruption. On the other side, PPK must face a still sizable number of fujimoristas who control the country’s Congress—indeed, Kuczynski’s party won only 20 percent of the seats there, while Keiko Fujimori’s party won over half. In order to govern effectively, Kuczynski must find a way to work with that majority as well.

Caroline Yezer is an anthropologist who works on indigenous rights and political violence in Peru.