Art Towards Livability in Colombia

Colombians grapple with the meaning of artistic and cultural production as the country’s long internal conflict appears to be drawing to a close. 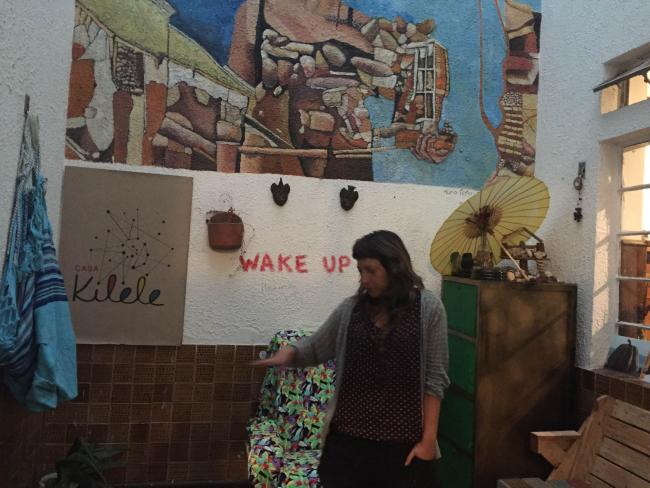 For Juliana Cepeda, social responsibility is a primary focus at Casa Kilele, the cultural house and arts residency she founded in Bogotá, Colombia. In operation since November 2014, Casa Kilele hosts arts administration seminars, panels, screenings, art and yoga classes, and even holds a farmer’s market. Cepeda is particularly interested in how art can achieve social change by providing a safe space amidst the nation’s complex and violent histories. She remarks that, “Colombia is a nation that has been bleeding for 50 years. I see this when somebody comes in and does a workshop. They leave wanting to create and work more on their craft… They leave a bit happier, a bit less disconnected.” As Cepeda puts it, art serves as a “method of transformation.”

This past February I traveled to Bogotá and conducted interviews with various art workers in the city. Specters of the ongoing violence, displacement, and the peace processes recurred—a presence that was actively engaged or disavowed by many of my interviewees. As I met various bogotanos working in the arts, I wanted to see what role an arts-focused manipulation of physical space has had in peacemaking and mourning at a time when the country is attempting to move beyond its violent history. I had an idea that art spaces were being utilized as homes for peacemaking—this, however, proved not to be the case across the board, at least not in those terms.

The following embryonic thoughts on the complex roles and mechanisms of art spaces in Bogotá come from conversations with a variety of people working in Bogotá’s arts scene: founders of two cultural houses that focus on community organizing and arts education, a professor of Colombian popular culture at the Universidad de los Andes, and a manager of performing arts at an institution that also runs the second-largest art fair in the city. I also spoke to a programming associate at El Banco de la República, Colombia’s largest cultural initiative and state-run bank—the connection between banking and cultural funding that occurs in art markets everywhere is taken to its zenith in this institution. Visiting such cultural centers and speaking with people involved not only revealed glimpses of the complicated relationships between culture, the peace process, grief, and social responsibility; it also spoke to the role of the arts in negotiating senses and aspirations of normalcy in “post-conflict” Colombia.

For everyone I spoke with, issues of funding were central. This fact exposed the nuanced cultural perceptions of art’s use-value in Colombia, but also shed light on cultural implications of the country’s history. Vanessa Adatto, the manager of performing arts at Espacio Odeon, was especially vocal about the complexities of financing cultural projects in the city. Odeon is a cultural center that produces multimedia contemporary art and theatre projects. It also runs the second-largest art fair in the city and maintains as its central mission the goal of fairly compensating artistic labor. To do this, the organization must tirelessly fundraise. Since government grants are sparse and generally insubstantial, Adatto and the four other women who run Odeon are sometimes put in a compromised position, seeking funding from corporate sponsors such as Petrolas, a multinational petroleum and real estate development company. (Petrolas recently funded a satirical play at Odeon.) Adatto remarks, however, that, “if they [Petrolas] are going to give me the money to pay artists or put on a play with a seal of quality, I have to put aside my personal politics for something good… My only mission is to dignify the work of artists— they are paid very poorly, and there is no respect for the work they do in Colombian society.”

For some people I interviewed, such as Cepeda of Casa Kilele or Óscar Aquite of El Banco de la República, a central mission for the art spaces they are associated with is to provide space to show or create work that promotes social change. The country’s decades-long conflict is inevitably evoked in this work.

For others, like Adatto, social responsibility is decidedly not a part of their mission. Odeon is interested in providing a platform for contemporary art that may or may not be political in nature, but the organization adamantly does not incorporate a philanthropic mission. Adatto makes the claim that arbiters of cultural funding mandate that contemporary art “should just help displaced people, help children, and people from the streets.” But,” Adatto asks, “what happens to artists who…want to use contemporary techniques, but don’t touch upon subjects that have to do with the war, with Pablo Escobar, with the guerrillas, with drugs, with NARCS? It’s a problem to find financing because private companies have a social responsibility with the country—they want to see results that help people.”

Her words express a gesture towards creating and sharing Colombian culture that isn't explicitly marked by the violence and issues related to the country’s conflict, a gesture towards cultivating contemporary artwork that will appeal to international art markets because of its quality. This line of thinking seems to actively resist government-sanctified notions of “socially-responsible” art, and depictions of the conflict that fit into state narratives. At this point in time in Colombia, there is a strange contradiction between desires to be in dialogue with the violence and a longing for rendering Colombia “safe” for tourism and commerce by “moving beyond” these very same histories. One could argue, however, that Adatto in a way is articulating a desire for peacemaking by opening up room for more nuanced dialogues about Colombia.

Questions I had about the financial maintenance of a space turned into inquiries about how artistic spaces in Bogotá have begun in the first place. Adatto shared that Espacio Odeon was facilitated through private investors that saw potential in renovating and reopening a theatre that had an impressive legacy in Colombia. The space that Odeon occupies used to house one of the most famous theatres in the country, the Teatro Popular de Bogotá— the theatre closed when it went bankrupt in the 1990s, when the conflict became so violent and widespread that people were afraid to leave their homes for La Candelaria, the neighborhood where the theater is located. But for less market-driven, more pedagogically-focused art spaces, such as Casa Kilele and Locus Espacio Creativo, outside investors are hard to find for getting their projects off the ground. So too are government grants—the Colombian government doesn’t accept grant applications from institutions that have been in existence for less than one year.

For Cepeda of Casa Kilele and Jacobo Alvarez of Locus, it was family money that made their projects possible. Locus is not only a performance venue, but is primarily a music and design school that provides courses for styles and techniques that aren’t usually a part of university curricula. This has created an affordable environment for artists to expand their practice. For Locus, its alternative pedagogical aspect has made it difficult to get government funding. Alvarez asserts that, “They [the government] tend to get scared if you say that you’re going in an educational direction. They freaked out when we told them that we were holding classes, because they want someone from the government controlling the way we teach, and how classes are accredited.” According to Alvarez, “It’s hard to work with this kind of government, so we try to just work with the resources that we have and be more independent, but then the economic support has to come from private investors.”

That these private investments come from family trusts evokes the imbalanced class dynamics of institutionally recognized cultural production and consumption in the Colombian capital. In other words, the resources of money and time to make, view, or be educated in “fine art” are reserved for the Colombian upper classes. Though this could be said about the arts community in much of the world, in Colombia, where income inequality is extremely visible and maintained through services and privileges allocated depending on a person’s assignment within the six economic estratos, this is exacerbated. Those with parents who could afford to facilitate them leaving the country during the exceptionally violent years are the same ones who have returned to rebuild Colombia’s cultural sphere.

But for Locus and Kilele, a primary goal is breaking down the barriers of accessibility to cultural production and consumption. Alvarez explains that, when possible, Locus gives scholarships to low-income students. He notes that the organization also has plans to increase outreach to those who have been traditionally marginalized from the arts. Locus’s interests in social outreach within the arts reach beyond class exclusions. As he notes, elderly people who have been affected by the conflict have also begun using the arts space. For these people, Locus is not only a place that keeps them tied to the city and its culture, but is a home where they can distance themselves from the conflict, and memory of it. As Alvarez remarks, “People in Colombia are suffering from one conflict or another, and there are a lot of people who come to the city to escape the first problem, only to experience more violence… It’s a really big issue that we don’t know how to handle yet.“ Like Cepeda and Kilele, Alvarez envisions Locus as another home for bogotanos, one committed to peacemaking through art that works to resist anger and violence.

Regardless of their approaches to art’s role in working through the current conflict and more general social issues, the art workers I spoke with were in consensus that cultural projects and art labor were undervalued in Colombia. They voiced concerns that culture wasn't only undervalued or dismissed in terms of economic capital, but also as social capital. In Adatto’s words, “Colombia has a huge problem because it has never conceived of culture as a way to accrue social capital.”

This may be changing, however. As Colombia’s Ministry of Culture continues to grow, as more Colombians return and stay in the country, and as the peace processes open up new social and political space for Colombian citizens—of all social classes—there is hope that Colombian attitudes about art’s place in society will so too expand. A larger shift may just be beginning.

*Special thanks to Vanessa Adatto of Espacio Odeon, Jacobo Alvarez of Locus Espacio Creativo, Óscar Aquite at El Banco de la República, Juliana Cepeda of Casa Kilele, Professor Catalina Muñoz at the University of the Andes, and NYU Gallatin for funding the research project that made this trip possible. And above all, immense gratitude to the Cadena family for their hospitality and care, and for sharing their Bogotá with me.

Gabrielle Jensen is an independent curator and writer based in New York City. In 2015, she graduated from the Gallatin School of Individualized Study at New York University, where she composed a concentration around “Dialogic Art Theory and Practice.” Her academic interests include feminist-informed theory, artistic activism, and what art’s role is in cultivating and articulating empathy despite the conditions of late capitalism. She wishes to attend a curatorial studies program in the fall of 2017.