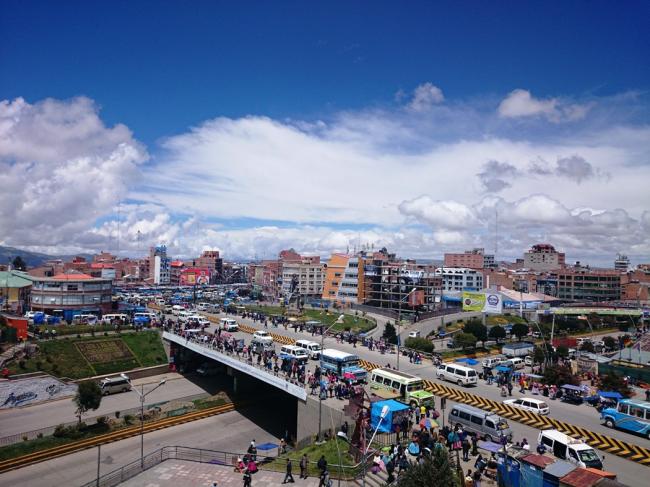 The day in court for the families of victims of Bolivia’s 2003 Gas War came a step closer recently when the U.S. Eleventh Circuit Court of Appeals unanimously rejected an attempt to block a civil lawsuit against Bolivia’s former President Gonzalo “Goni” Sánchez de Lozada and his Minister of Defense, Carlos Sánchez Berzaín. Both are currently living in the United States, The case demands monetary damages for eight relatives of the sixty-four people killed in September and October 2003 when the government unleashed the military on unarmed protestors.

The defendants’ attorneys had argued for dismissal on the grounds that the plaintiffs had already received some monetary benefits in Bolivia, as the victims’ families were granted what the Bolivian government calls humanitarian assistance compensation shortly after Goni fled the country in mid-October 2003. But, in an unprecedented decision, the federal appellate court rejected this line of argument. Citing the Torture Victim Protection Act (TVPA), the court recognized the right of plaintiffs to sue in the U.S. once legal options in their home countries are exhausted.

“This ruling goes a long way to ensuring that there remains the possibility that authorities who torture and murder their own citizens can be called to account in U.S. courts,”explained one of the lead attorneys, Judith Chomsky in an email communication. She has worked on the case since it was first filed in 2007.

At issue are events in Bolivia during September and October 2003 when the country was in the midst of uprising. Goni had announced the construction of a pipeline to export Bolivia’s massive natural gas reserves through the country’s historic enemy Chile. The decision sparked massive protests, none as fierce as those in the indigenous highland city of El Alto. When Goni ordered the military to control what was increasingly a country-wide movement, dozens of people were killed and hundreds injured. Protestors, joined by members of his own government, demanded that he resign.

On October 17, 2003 he escaped to the United States where he had deep ties to the Democratic Party. Ever since, Bolivia’s richest man and mining magnate has lived comfortably in Bethesda, Maryland.

Among the plaintiffs in the case are Teofilo Baltazar Cerro, whose pregnant wife was killed by a bullet fired through a house wall; Eloy Rojas Mamani and Etelvina Ramos Mamani, whose 8-year-old daughter was killed when a shot pierced a window; and Felicidad Rosa Huanca Quispe, whose 69-year-old father was shot to death on a road.

Repeated efforts have been made to bring Goni to justice for his role in allowing such abuses to occur, and then shirking responsibility. In 2004, two-thirds of Bolivia’s Congress, controlled by members of Goni’s own political party, authorized a “trial of responsibility” against the ex-President and his principal collaborators.  While it took seven years to conclude, it unanimous ruling in August 2011 resulted in the imprisonment of two of Goni’s ex-ministers and five military commanders.

The head of the families’ association, Patricio Quispe, told the local press, “It was not what we asked for, but we think it is an important step. We have fulfilled our responsibilities to our dead family members, and the sentence sets an example, so that no government will ever again feel it has the right to murder its own citizens.”

However, in 2012, the U.S. denied the Bolivian government’s effort to extradite Goni, Sánchez Berzaín and former Hydrocarbons Minister Jorge Berindoague from the U.S. to face charges on the grounds that that the Bolivian accusations have no equivalency in U.S. law. Vicki Aillon worked closely on the case for several years. “The U.S. government, through the Department of State and the Embassy, blocked us at every turn”, she reported, “Because of Goni’s high level political connections, chances were slim we could ever succeed.”  Other critics concur, arguing that Goni was protected by the U.S. government.

Despite the rejection, Bolivia filed a new case for extradition in 2014. It passed the first hurdle in February 2016 and has been sent to the Department of Justice for consideration. “We will continue to campaign for the extradition of Sanchez de Lozada and Berzain to Bolivia so they can face trial for their crimes," said Nick Buxton with the U.S.-based Extradite Goni campaign., a loose group of Bolivia solidarity activists.

In January 2016, Bolivia’s National Assembly gave the green light to a probe over possible prejudicial contracts in the widespread privatization of state enterprises undertaken as part of his government’s program during Goni’s first Presidency (1993-97). His government is accused of underselling state shares in the privatization of the state railroad company ENFE.

The civil case in the U.S., was brought by the Center for Constitutional Rights, the International Human Rights Clinic at Harvard Law School and the Pro Bono division of the legal firm Akin Gump. Despite various setbacks, the US lawyers and the victims’ families have refuse to give up. “As long as the plaintiffs want to keep going, we will pursue every available remedy,” Chomsky said.

In May 2015, the lawyers were granted the right by the appellate court to hear the 85-year old Goni’s version of the events and put questions to him over the course of a two-day deposition. According to Chomsky, who led much of the questioning, Goni was evasive in his answers.

Given the U.S. appellate court’s decision to block Goni’s lawyers’ argument that he could not be tried under U.S. law, the district court will now proceed with the U.S. civil case. Judith Chomsky is optimistic. “The defendants might try to stall yet again however this is a unanimous decision by respected mainstream (or conservative) judges.  It is highly unlikely they could be successful.”

Rogelio Mayta, the Bolivian lawyer representing the victims’ families was more cautiously optimistic. “We are celebrating but we do it knowing that it only one chapter of a long story,” he said.

Linda Farthing has written three books on Bolivia. The latest is Evo’s Bolivia: Continuity and Change.