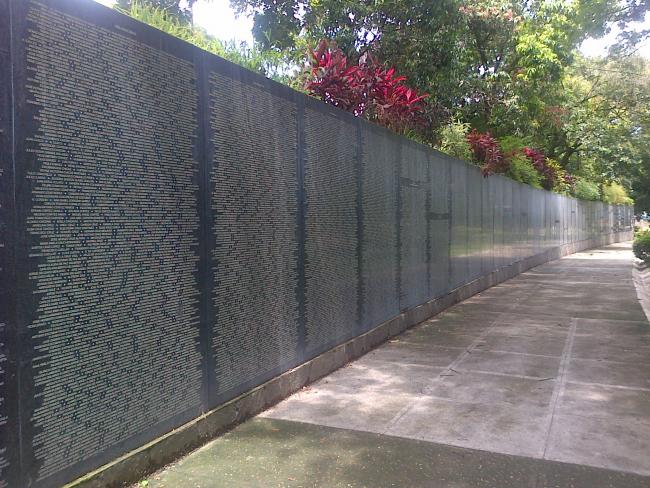 On July 11, 2016, in a historic decision, El Salvador’s highest court abolished the amnesty law that has been in effect since 1993. The controversial law was put in place immediately following the signing of the peace accords that ended El Salvador’s brutal 12-year civil war (1980-1992), thus sheltering from prosecution the perpetrators of grave human rights violations committed during the conflict in El Salvador. In a much-anticipated decision, the Constitutional Supreme Court declared that amnesty law unconstitutional because it impeded the state’s obligation to investigate crimes against humanity.

An estimated 75,000 civilians lost their lives during El Salvador’s civil war. Some 8,000 were forcibly disappeared, while tens of thousands more were internally displaced or obligated to flee protracted violence. News of brutal atrocities spread across the world. From the high-profile assassination of Archbishop Monseñor Oscar Arnulfo Romero to the merciless slaughter of the entire village of El Mozote, more than 22,000 acts of violence by armed actors of the civil war were recorded by the United Nations Commission on the Truth for El Salvador.

While the state and the oppositional forces of the Farabundo Marti Liberación Nacional (FMLN) both committed abuses during the conflict, the UN-backed Truth Commission attributed 80% of human rights violations to the government of El Salvador. The Truth Commission, while helpful towards recouping the memories of the brutal acts of the war, had no power to enforce, especially against the amnesty law that followed. The amnesty law prevented prosecution and supported continued impunity thus thwarting national efforts for justice and reconciliation.

Over the past 20 years of post-civil war nation-building, government representations of national culture, history, and identity have maintained silence about the atrocities of the civil war. Some officials argued that to do otherwise would threaten the nation’s fragile peace. Others argued that the nation needed to look forward to the future, and rather than dwell on the violence of the past. Such arguments justified the amnesty law. Challenging the government’s muteness and combatting public forgetting, civil society actors created two new museums and one major monument in the nation’s capital of San Salvador. Such commemorative sites have played a pivotal role as memory keepers while also helping to sustain the calls for unfulfilled justice.

In the late 1990’s the Museum of the Word and the Image (Museo de la Palabra y el Imagen, MUPI) was established “against forgetting” (contra la desmemoria) with exhibitions and educational activities dedicated to “weaving memory” (tejiendo la memoria). The museum collects and exhibits photographs, manuscripts, audio recordings, and films. Among the collections in the museum archives are photographs of the El Mozote massacre, posters demonstrating the international solidarity for the people of El Salvador and their revolutionary struggle; propaganda used by the Salvadoran government’s armed forces to reduce popular support of the guerrillas; photos about women combatants and the popular schools that were activated in the conflict zones during the war; and information about refugees and their return at to the country after the Civil War. The museum houses the most comprehensive existing archive of materials on the Salvadoran Civil War, maintaining documentation and memory of wartime abuses that the amnesty law sought to shield.

Carlos Henriquez Consalvi, MUPI’s co-founder and director, participated in the civil society collective that erected the Monument to Memory and Truth (Monumento a la Memoria y la Verdad) in San Salvador’s central Parque Cuzcatlán in December 2003. The commemoration site consists of an 85-meter black granite wall etched with the names of more than 24,000 civilian victims. Another portion of the monument contains colorful stucco reliefs, depicting symbols of past social struggles and violence, such as the assassination of Archbishop Romero. Since its construction, the monument has been recognized as a space for hope—and a place for continuing to envision and a more just, humane, and equitable society.  In the absence of state recognition of past atrocities, civil society has had to rely on its own resources to recapture the memories and to publicly recognize the war’s many civilian victims.

Meanwhile, the Museum of Art (Museo del Arte, MARTE), which opened in 2003, has relied on private funding to promote and support contemporary art in El Salvador with an expansive collection that showcases the nation’s history. Its permanent exhibition, “Pieces of Identity,” (“Trozos de la Identidad”) includes paintings that represent the history of social movements in the country, as well as the violence associated with the civil war. Among them is “El Sumpul” (1984) by Carlos Cañas. The painting refers to a 1980 military operation in which at least 300 civilians, including many women and children, were assassinated in the River Sumpul in the department of Chalatenango. By displaying “El Sumpul,” MARTE does more than display the historical and contemporary artistic talent of El Salvador; it also tells the history of the nation’s darkest hours and serves as an important guardian of memory.

The abolition of the amnesty law is an important step in the government’s slow process of addressing an important chapter in the nation’s difficult recent past. In 2010, President Mauricio Funes, the first FMLN candidate to achieve the presidency, gained international attention when he issued a state apology for the assassination of Monseñor Romero, as well as an apology for historical and ongoing violence against indigenous populations in the country. In 2012, at an event marking the 20th anniversary of the El Salvador’s 1992 peace accords, Funes also apologized for the atrocities committed at El Mozote. Later that year the Inter-American Court of Human Rights issued a judgment condemning the Amnesty Law for impeding the government of El Salvador’s responsibility to investigate various cases of human rights violations including the case of El Mozote.

In 2013, an international forum at the Universidad de El Salvador’s entitled “Memories of the War: Changes and Continuities in Local Societies at the beginning of the 21st Century” continued the process of recuperating the history and memory of the Salvadoran conflict. In addition to highlighting the growing body of international scholarship on the civil war, the forum announced the creation of the Unit for Investigations about the Salvadoran Civil War within the national university and the decision to dedicate new resources to research about the conflict. These actions of official apology, international involvement, and state-sponsored academic programming made important steps to breaking long-standing official silence and together with other other civil society initiatives, like museums and monuments, promoted new knowledge about the causes and consequences of the civil war.

One of these consequences, of course, is that the civil war brutality has been replaced with other kinds of violence. As has been widely publicized, El Salvador replaced Honduras as the most violence peacetime country in the world in 2015, with homicide rates nearing one homicide per minute in January 2016.  Many, including Benjamín Cuéllar, the ex-director of the Instituto de Derechos Humanos de la Universidad Centroamericana, (Institute for Human Rights at the Central American University, IDHUCA,) see a connection between ignoring prosecution of the human rights abuses of the civil war and high levels of postwar violence. As he noted in a recent article in El Diario de Hoy, the impunity that resulted from the amnesty laws has permitted other wars, namely "the war between gangs, the government’s war against gangs, and the war of gangs against the Salvadoran population." There is hope that addressing past human rights violations will play a role in creating a more just and peaceful society.

The revocation of the amnesty law now makes it possible to pursue justice for civil war wrongs including criminalizing those responsible for the human rights abuses caused by death squads, paramilitary, and security forces. The 73-page court decision lists 32 crimes that occurred between 1989 and1992 that can now be investigated.  The list includes the names of members of the military or of the FMLN indicated as having responsibility. In terms of next steps, Romeo Benjamín Barahona Meléndez, ex-Attorney General under former President Mauricio Funes, explained that victims can now formally denounce these past crimes, and the Attorney General’s office will begin investigating the cases.

The court decision, while heralded by many, is causing a commotion within the leadership of the FMLN, the political party that holds executive power in the government.  Structurally, whereas the military actors on the list are no longer in the government, investigations could instead lead to trials that involve FMLN leaders, for example the President of the Republic, Vice President, Ministers and Deputies. Some elected officials and government functionaries are openly critical about what will happen next, stating they fear “witch hunts” and the reopening of old wounds. Despite reservations from some in government, the Attorney General’s office appears to have the will to undertake investigations.  However, the government lacks resources for the processes, including funds to support the indemnization of the victims who are determined to have suffered “moral damage” (daño moral).

However, should leaders or government actors ignore the ruling, there will undoubtedly be international criticism and a demand for accountability. Sites and practices of public memory in El Salvador have maintained the nation’s focus on civil war human rights abuses and the need for justice for decades. National and international attention created through these efforts contributed to the historic decision to finally revoke El Salvador’s Amnesty Law.  These audiences will be carefully monitoring the fresh developments to follow. It is difficult to predict the outcomes of this important court decision. What happens next in El Salvador will be a chapter in an important historical process of nation-building, memory and justice that will provide lessons for other societies pursuing similar struggles against state violence, forgetting and impunity.

Robin Maria DeLugan is Associate Professor of Anthropology at the University of California, Merced. She is the author of Reimagining National Belonging: Post-Civil War El Salvador in a Global Context (University of Arizona Press, 2012).