The dynamics of voting patterns in Colombia’s narrowly-defeated plebiscite carry important lessons for the future of peace and democracy, particularly in the country’s rural countryside.

The rejection of Colombia’s October 2 referendum on the peace accord between the Colombian government and the Revolutionary Armed Forces of Colombia (FARC) has cast uncertainty over the entire national landscape. The political scene changes seemingly by the hour, as the newly empowered opposition, the administration of President Juan Manuel Santos, and the FARC begin to stake out their positions on the potential for revisions to the 297-page accord.

In the countryside, time is moving at a different pace, as the thousands of FARC fighters who had already congregated in assigned demobilization sites and packed up their arms wait in limbo, and the rural communities that voted on either side of the referendum contemplate the potential of a return to violence. Nonetheless, the actions of those same communities on October 2 suggest what Colombian social mobilization and political institutions might have looked like had the referendum passed and the August 24 peace accord been brought into full effect. 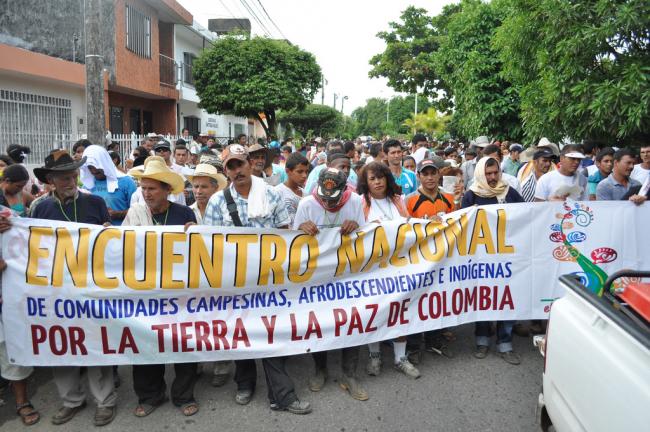 Within hours of the referendum’s conclusion, commentators pointed to two trends in the voting results. First, Colombia’s urban core evidently rejected the agreement while poorer rural peripheries embraced it. The second was that victims of the conflict—who are overwhelmingly rural—were a crucial constituency for the “Yes” vote. Other postmortems have focused on low voter turnout, which was blamed on everything from the hurricane that grazed the Caribbean coast on October 2, to complacency from “Yes” supporters, to the fact that the vote lacked the normal material enticements that Colombia’s political machines use to turn people out to the polls.

Largely absent in these assessments of the referendum are perspectives on how voting played out on the ground—what did happen, rather than what failed to happen; the ways by which Colombians went about voting, rather than reasons for why they did not. For one, zooming in from the national election map indicates that the center-periphery dynamic was equally if not more significant within individual departments of Colombia. Such attention to regional and local contexts also reveals how Colombia’s social and political movements are building on the legacies of previous mobilizations, and what the peace accord could have meant—and could still mean—for the expansion of democratic participation and pluralism.

Two cases from opposite sides of the country make clear the possibilities and limitations of political action in contemporary Colombia.The Catatumbo—a collection of eleven counties in the department of Norte de Santander, on the Venezuelan border—is a microcosm of Colombia’s confounding confluence of social, political, drug, and economic conflicts. The Catatumbo has been the site of some of Colombia’s most concerted social protests in recent years, manifestations of broader rural dissatisfaction with a lack of infrastructure and services. This historical pattern of neglect is exacerbated in the Catatumbo by the Colombian government’s frequently antagonistic posture towards the area due to the coca trade and presence of illegal armed actors.

Absent other economic opportunities for Catatumbo’s residents, coca is a significant commodity; cultivation in Norte de Santander has skyrocketed since government eradication programs ended in 2012. Coca’s prevalence, together with the presence of numerous armed groups, including the FARC and a faction of the long-demobilized Popular Liberation Army (EPL) that is deeply implicated in the cocaine trade, has frequently led to the harsh repression of social protest in the Catatumbo by the government.

It is precisely these conditions—low state investment in the countryside, the absence of licit economic options, the deployment of state violence against popular mobilization—that the August 24 accord intended to address. Accordingly, over 85% of the vote went to the “Yes” campaign in parts of the Catatumbo, even as the referendum failed by a margin of nearly 2-to-1 in Norte de Santander as a whole. To be certain, rates of abstention in the Catatumbo were extremely high on October 2: while Norte de Santander saw 40% electoral participation, just above the national average, Catatumbo’s voter turnout hovered around 30%.

The effort that went into achieving this figure is nevertheless significant, given the logistical and political obstacles confronting collective action in the Catatumbo. For example, the lack of functional transportation networks is a fundamental complaint of Catatumbo’s communities and countless other Colombian rural zones. Such basic considerations of mobility exacerbate the impositions of Colombian electoral law, which requires voters to cast ballots in the location where they are registered, and not necessarily where they live. Voter abstention in Colombia may thus often be less a question of choice than is often portrayed. For example, a post-referendum New York Times article about a family of “No” supporters makes only passing reference to one woman’s “10-hour bus ride [from Bogotá] to cast her vote in her home region.”

Governmental ambivalence further affected referendum turnout in the Catatumbo, though actions of the political left attempted to make up for it. The day before the referendum, officials in Tibú, Catatumbo’s largest county, refused to fund transportation that would bring the inhabitants of outlying villages to polling sites. Activists from an array of left groups—the newer Juventud Rebelde (Rebellious Youth), as well as the more established Unión Patriótica (Patriotic Union, UP), which faced massive state and paramilitary violence in the 1980s and 1990s—stepped into the void, delivering voters to town.

These activists hail from the matrix of social and political movements responsible for much of Catatumbo’s civic life. Perhaps the oldest institutional lineage in the area traces back to the community action councils. These government-sponsored agencies first appeared during the heyday of international community development programs in the early 1960s, and rapidly became a central forum for the articulation of local demands. Although the entry of paramilitary forces into the Catatumbo beginning in 1999 forced the displacement of many council leaders, the subsequent return of these movements have helped to catalyze new linkages between social organizing and political action. The activists responsible for bringing out Tibú’s voters on October 2 are in several cases the siblings and children of those who direct the Asociación Campesina del Catatumbo (Catatumbo Campesino Association) which spearheaded the lengthy 2013 agrarian strike, and advocacy fronts for Catatumbo’s displaced peoples. This combination of formal political affiliation and nonsectarian civic work is altogether typical of Colombia’s rural war zones.

As written, the August 24 accord’s provisions for political participation offered to substantially widen the space available to these local movements. While much focus has been placed on the controversial aspect of the accord that would set aside a minimum of five seats in each of the House and Senate for the FARC over eight years, the accord would also establish 16 special House seats for the zones most affected by violence and government neglect. Importantly, these seats would not be open to existing political parties. Among other measures, the accord additionally ordered greater security for social movement leaders—no small concern in the Catatumbo, where the female president of a community action council was assassinated in January 2016—and mandated equitable access to a new system of radio and television networks. By participating in the construction of peace, the accord states, Colombians would take the first steps towards “strengthen[ing] and complemen[ting] democracy” writ large.

In other words, the political reforms outlined in the accords reach far beyond the FARC themselves. Indeed, it is striking how few times the group’s name appears in the 30 pages of the accord that outline the future of political participation in Colombia. We should not, moreover, assume that the FARC’s interests are aligned with those of other social and political movements, or that the FARC’s political successor would dominate the countryside. “The FARC’s agenda, not ours, is getting negotiated in Havana,” representatives of Catatumbo’s campesinos declared to the investigative website VerdadAbierta in June 2016. Similarly, one community action council leader predicted a power struggle with the FARC once the accord was implemented.

The uneasy relationship between the guerrilla and its ostensible rural base is also evident in a second region where the peace accord won support on October 2. The southern Amazonian department of Putumayo is not entirely like the Catatumbo. First, there is no notable regional center-periphery divide in Putumayo; all of its counties backed the referendum. Second, from 1995 to 1996, Putumayo’s coca growers achieved a level of organization that far outstripped the mobilizations Norte de Santander would witness in the 2010s. In the largest example of rural collective action in Colombia since the early 1970s, tens of thousands of Putumayo’s coca growers organized a series of civic strikes in order to compel the Colombian government to fulfill its obligations to them as Colombian citizens. 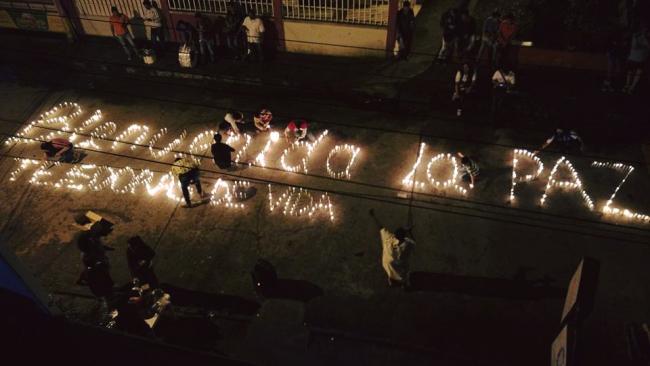 Here the stories of Catatumbo and Putumayo begin to converge. Though negotiations with the government ended with promises of new social services, neither pact was ultimately carried out. By the end of the 1990s, the paramilitaries also swept into Putumayo, to devastating effect. The coca growers’ movement collapsed amidst the FARC’s war with the paramilitaries and with the Colombian government.

Yet more than a decade later, as in the Catatumbo, older strains of organizing have not completely disappeared. As anthropologist Winifred Tate writes, the Catholic Church in Putumayo was a crucial catalyst in encouraging associational life before the paramilitary takeover, and has since begun to exercise that influence anew. Community action councils were another key cultivator of local leadership capacity, even at the height of the FARC’s power. By mid-2016, council presidents sometimes served as the intermediaries between, on the one hand, the FARC members and international observers sent to prepare for peace and, on the other, the communities where Latin America’s oldest insurgent force would demobilize and rejoin Colombian society.

October 2 should not be remembered solely as the day in which those dreams of a peaceful Colombia were deferred. The regional patterns and local experiences of that Sunday are invaluable windows onto recent Colombian history and the current state of rural politics. Absent the implementation of the peace accord, participatory action will remain largely confined to the local and regional level. Even so, falling indices of violence in recent years have permitted early steps in the reconstruction of rural Colombia’s public sphere. Beyond the final results of the vote itself, October 2 thus demonstrated the resiliency of Colombian social life in the face of violence, and how those local, rural movements will still help to define a new Colombian democracy.

Robert A. Karl is assistant professor of history at Princeton University, and author of the forthcoming book Forgotten Peace: Reform, Violence, and the Making of Contemporary Colombia (University of California Press, 2017).