Women on the Frontlines of the Colombian Peace Movement

Women peace activists continue to play a crucial role in paving the way towards a peace accord in Colombia that promotes gender justice in the face of conservative opposition. 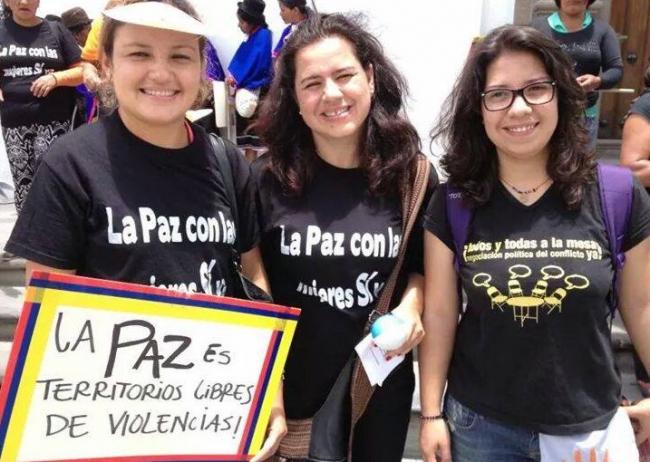 Last September, two graying fighters in the hemisphere’s longest-running armed conflict consented to an awkward handshake. Ernesto Londoño wrote in the New York Times that he watched Juan Manuel Santos and Timoleón Jiménez, alias “Timochenko,” head negotiator for the FARC, shake hands “in stunned silence,” astonished at the diplomatic successes of Colombia’s four years of peace talks. On the evening of October 2nd, international observers reacted once again in stunned silence—this time, however, because the prospects for peace were thwarted by an entirely unexpected outcome. The “Yes” vote lost by less than 1% in a surprise to most observers, who predicted that the referendum would pass. Subsequent analyses have cast the vote as Colombia’s Brexit, an electoral coup carried out by a disaffected anti-establishment voting bloc.

The “No” campaign, however, was anything but anti-establishment. Though Colombians whose territories have suffered the most direct violence overwhelmingly voted to support the accords, the country’s white and mestizo Andean centers of power, where urban violence has been on the wane, carried the “No.” This seeming paradox, in addition to being a tragedy, illuminates the fact that Colombia’s conflict is no longer—  if it ever was— a conflict between the state and the guerrilla as much as it is a conflict between elites and the popular sector. Chief among those who stand to lose if the hard-won peace accords are discarded—and chief among those who fought hardest for them to happen in the first place—are women.

Women peace activists played key roles in the Havana negotiations, both in the talks’ preparatory years and in their execution. Networks of women’s and feminist organizations like Ruta Pacífica(Peaceful Path), the Organización Femenina Popular (Popular Women’s Organization), and other members of the Movimiento Social de Mujeres Contra la Guerra (Social Movement of Women Against War) had been demanding a negotiated solution for two decades, softening the ground for the Havana talks. Once they were announced, women lost no time in advocating for civil society to have a place at the table, and organized several parallel events to amplify women’s voices. When civil society was initially excluded, women organized parallel summits and roundtables, gathering proposals to be delivered to Havana. They held “cortes de mujeres,” public hearings designed as spaces for crimes committed against women in wartime to be made visible. And they traveled the country and collected women’s testimonies of violence to be published in Colombia’s Truth and Memory Commission report, a key tool in any campaign for a peace with justice.

Women’s advocacy was largely responsible for the diversification of government negotiators to include two high-profile women at the table, and for the installation of a Gender Sub-commission, intended to ensure women’s access to the benefits offered by the accords. This marked a departure from the country’s—and indeed, the world’s—experiences with peace accords; among the thirty peace documents signed in Colombia since the 1980s, only 15 signatories have been women, compared to 280 men. The result of this activism was a peace accord that paid significant attention to men’s victimization of women in wartime, and stipulations intended to assure women’s ability to benefit from the accords and which gave particular attention to their differentiated suffering. The accords also made mention of Colombia’s LGBTQ community. They affirmed the distinct wartime experiences, and therefore distinct peacetime needs, of diverse sectors, including indigenous peoples, Afro-Colombians, rural communities, and people with diverse sexualities and gender identities. And the accords called for state recognition of and attention to violations against LGBTQ Colombians. These gains were hard-won, and the focus on gender and sexuality came only after years of women’s, feminist, and LGBTQ activism both in civil society and, one might imagine, among women guerrillas.

But these modest gains did not go unnoticed by Colombia’s conservative establishment. In the debate leading up to Sunday’s vote, prominent voices on the right and in the Church called attention to what they referred to as the “gender ideology” of the accords. “No” campaigners warned voters that the accords were a Trojan horse intended to smuggle in the destruction of the heterosexual nuclear family. Despite the fact that many similar or equal measures were included in the 2011 Victims’ and Land Restitution Law, and that no measure went so far as to accord marriage or adoption rights to LGBTQ citizens, the Colombian Right warned of a “homosexual dictatorship” looming on the post-referendum horizon.

The wave of patriarchal indignation broke when the Ministry of Education, whose minister, Gina Parody, is an out lesbian, published “convivencia” (“living well together”) materials for schools, which included anti-bullying and anti-discrimination recommendations. After false and inflammatory imitations of the manuals were distributed to parents, the resulting outcry focused attention anywhere that adhered to the narrative of the state imposing a so-called gender ideology. The accords, it seems, were in the wrong place at the wrong time. Combined with the backlash against the April vote for marriage equality, a perfect homophobic and masculinist storm emerged. The Evangelical Church argued that a “No” vote was a valiant defense of the heterosexual nuclear family against an insidious onslaught led by gay and feminist rights activists. Former president Álvaro Uribe, a right-wing Catholic and generally an ally of Colombia’s evangelicals, referenced the defense of the family in his desperate diatribes against the passage of the accords. Ricardo Arias, of the Libres party, went so far as to count the number of times the word “gender” appeared in the agreements, saying: “The presence of the gender focus included in the accords is unnecessary. We’re talking about an end to conflict, and they never told us they’d be talking about the transformation of society.”

Arias’ comment shines a light on the unwillingness of Colombian elites, in spite of the stated commitment of many on the Right to a negotiated peace, to alter any of the structures that hold the armed conflict upright. War cannot be understood unless gender dynamics are also understood, as feminists have long asserted. Arias’ indignation at the idea that elites should surrender any of their symbolic or material power – as if a conflict built on the backs of so many could be resolved in any other way – reflects a conservative backlash against feminist gains in society and the law.

This backlash found a willing ally in the “No” campaign, whose organizers used hyperbole and false claims to incite voters against the accords, threatening that Colombia was going to “turn into Venezuela” and be handed over to Marxists. “We were trying to get people to go out and vote while they were pissed off,” admitted Juan Carlos Vélez, head of the “No” campaign. The fact that the word Vélez used to describe right-wing anger—“verraca”—derives from the word for a male boar is not insignificant. Though Vélez resigned his post a few days after making this admission, apologizing to the Colombian people for having disseminated false information, the damage was done. The European right-wing Catholic news site Infovaticana published an article the day after the vote, gloating that with the defeat of the so-called “pretext of peace” presented in the accords, the ideology of gender was also kept at bay. The colonial legacy of the seigniorial order was unwilling to permit a left voice into politics— perhaps for fear of how many followers it would win. But the Church was also so eager to slam the door in the face of the women’s movement that it sacrificed a chance at peace.

Since the October 2 vote, women’s concerns have largely been sidelined. As Roxanne Krystalli points out, three days after the referendum, Santos and Uribe met behind closed doors to discuss revisions to the accords. There was no gender sub-commission in the room, nor were there any representatives of the priorities for which feminist activists had pressed. Santos did, on the other hand, hold meetings with Christian evangelicals and business owners. According to one evangelical leader who sat in the meeting, “[The president] has said to us very openly: ‘We’re going to review this, we’re going to take out everything that threatens the family, that threatens the Church and we’re going to look for a phrase, a word, that doesn’t worry the believers.”

In other words, Santos—despite his erstwhile willingness to work with entities like the gender sub-commission—is seeking to mend relationships with the Right, and has asked women to put their concerns somewhere between the back burner and the trash can. In a study of the role of gender in nationalist conflicts, Cynthia Enloe has noted that women’s and feminist interests are often sidelined at moments of national transition. “‘Not now, later,’ is weighted with implications,” Enloe writes. “It is advice predicated on the belief that the most dire problems… are problems that can be explained and solved without reference to power relations between women and men.”

The victory of the “No” vote was devastating for women peace activists and other progressive sectors. But there are signs that Colombia may still be witnessing a moment of consolidation and empowerment for the women’s peace movement, even after the referendum’s failure. Catalina Rojas writes that after then-President Andrés Pastrana’s failed peace talks with the FARC in 2002, peace activism on the whole was sidelined and disillusioned—“frustrated and powerless,” in Rojas’ words, in the face of increasing militarization wrought by Plan Colombia. But women activists maintained their demands, and their movement strengthened in that moment, organizing an historic march in June of 2002 that brought 40,000 people to Bogotá under feminist banners. The event was a “salvation for civil society,” said Gloria Tobón. Women organizers from various sectors of society demonstrated to the country that the movement for peace was active and committed, and throughout the subsequent decade, they assumed a place at its vanguard. As an organizer with Ruta Pacífica told me in 2013, “The first to start talking about peace here in Colombia were us women.”

In the days since the referendum, women’s peace organizations have been among the many social movements mobilized in the streets. Groups of women wearing white or carrying white flowers to symbolize their commitment to peace have flooded public squares all over the country. They are demanding that an accord be implemented that includes women, and they have called all members of civil society to the streets to ensure a peace deal is eventually ratified. Using the terms often invoked by Ruta Pacífica activists, women are demonstrating the difference between being “pactadas,” by a peace accord—that is, constrained as administrable State subjects with no voice in the process—and “pactantes,” active drivers and signatories of conflict transformation. As Alejandra Miller Restrepo, of Ruta Pacífica in Cauca, said to me in 2013, They have to invite us to implement (pactar) the peace. Women have no reason to be in the backseat of the peace process.”  In the coming weeks and months, we can expect women’s peace organizations to be far from the backseat as they continue to lead the charge for a true peace with justice.

Kate Paarlberg-Kvam is a Visiting Assistant Professor of Latin American History at Skidmore College. She recently defended her dissertation, The Key to Peace is Ours: Women’s Peacebuilding in Twenty-First Century Colombia, at the University at Albany (SUNY).