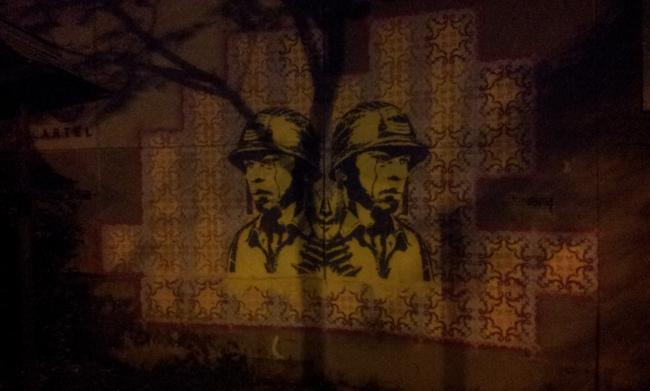 One of the most enduring memories of my childhood is that of two young men on a motorcycle shooting a woman I knew and killing her on the spot. It happened in Medellín, Colombia, on a sunny afternoon in the late 1980s. Although the murder left an imprint, it was not the first or last time I witnessed violence at close range. Suppressed in the back of my mind are memories of killings, shootings, kidnappings, thefts at gun point, extortions, street fights, the displaced people who lost their homes when guerrillas took control of their town, along with the split-second image of a ball of fire coming to engulf me from the blast of a car bomb that my family and neighbors survived.

All that before I was 23, when I left the country during the massive exodus of the late 1990s and early 2000s as the armed struggle plus an economic recession made life in Colombia unbearable. However, under any circumstance I consider myself a victim of my country’s conflict. I am just one member of the urban middle class who—despite living amidst the macabre chaos for many years—experienced one of the world’s longest civil wars from afar through the media. Meanwhile, with a mix of indolence and detachment, those Colombians who stayed learned to cope with the war; and thus, on October 2, a slight majority voted against the agreement that the government of President Juan Manuel Santos had reached with the Revolutionary Armed Forces of Colombia (FARC) after four years of negotiations in Havana, Cuba.

Much has been said about the geographical distribution of the vote, which shows that No triumphed in urban areas, where the conflict is not an immediate reality, whereas Yes won in peripheral and rural regions, where the conflict is as tangible as dead, disabled, and disappeared relatives, friends, and acquaintances. What has not been discussed is the tectonic fissure between generations that the plebiscite brought to the surface. Electoral statistics cannot measure the rift—it was a secret ballot—but it is manifest on both the streets and social media, which have been taken over by the youth in an effort to inject new impetus to the victims’ movement’s plea for an immediate solution to the impasse. To “urban” versus “rural” we must add “old” and “young” to the Colombia equation.

The political leaders of the No campaign stirred the Catholic and anti-communist fears of the older generations that grew up during the Cold War era by arguing that the peace accords would lead the country to “Castro-Chavismo” and “gender ideology.” Such perceived threats to private property, traditional family values, and religious beliefs were evident in my hometown, Medellín, in which 63% voted against the peace agreement.

Along a deep valley on the western cordillera extends the country’s second most important city. Surrounded by towering mountains that range from light green to dark blue, Medellín has no horizons but a sharp ridge that surrounds it, shrinking the firmament, and isolating the city in a self-contained world. When I was a child I was sure nothing extended beyond this ridge, and likewise so do the majority of paisas, as we proudly call ourselves, who harbor chauvinist beliefs of racial superiority passed down as birthright.

Murderous drug lords thrived in this oasis of Catholic moralism and capitalist entrepreneurship during the decline of the patriarchal industrialization model of the textile industry that dominated the city during most of the twentieth century. For the men and women who revered money, status, authority, and power, trafficking cocaine was the means to those ends. But not even during the sanguinary 1980s and 1990s, when local cartels turned the city into the murder capital of the world, did paisas stop believing in their supremacy and promoting themselves and their city as the country’s best.

In the middle of this societal schizophrenia, with the city drowned in blood and cocaine money and the country submerged in an insurgency-counterinsurgency war, my generation, the one that magazines and journalists call Generation X, came of age. We lived and died according to our socioeconomic class. While those who were born in poor neighborhoods became cannon fodder for the cocaine machine and its urban armies, the fortunate middle class was protected from the slaughter. We lived in gated communities and tower buildings, attended Catholic schools and private universities, and leisurely visited shopping centers, sport clubs, family farms, and beach houses.

Unlike previous generations who participated in the origins of the conflict, my generation inherited it. My grandmother was part of the first group of female organizers for the Liberal Party in the city’s working class neighborhoods, and her fellow party members fought the mid-century civil war of La Violencia. The gestures she used to explain the “necktie cut,” when the victim’s throat was slashed horizontally and the tongue pulled out through the wound, are still vivid in my mind. I also recall my uncles teasing my mother, who worked in Medellín’s most important public university, joking that her coworkers were disguised guerrilla fighters. Their veiled accusations were not far-fetched. The university was one of the main recruitment centers of the insurgency, thus professors, students, and employees, some of whom were my mom’s friends, regularly went to el monte to join the guerrillas’ rank-and-file or command.

But to us, the urban middle-class children of the war, violence was white noise that did not impede our sense of entitlement. Luxuriating between cynicism and indifference, ignorance was our norm— until a nearby killing, massacre, kidnapping, or car bomb shook us out of our illusion to remind us there was no safe place under the Colombian sun. Our childhood and youth was a constant process of accommodating to the shipwreck. Now, in our adulthood, we continue adrift in the high seas of our collective bewilderment. Some of us go on with our lives as if terror and death never existed and we have no part in it. Others opt to look at the horror in which we were raised and instead use our talents and trainings as historians, lawyers, journalists, filmmakers, political activists, and artists to influence social justice and public opinion. But, aside from our heartfelt commitment to putting an end to the violent dynamic that is life in Colombia, we are far from being the vital force pressuring for peace.

A new generation that is bolder, wilder, and braver than we ever were is coming of age and has taken the lead. Generation Peace, as they call themselves, fill Colombia’s plazas, avenues, and parks alongside the peasants, indigenous peoples, Afro-Colombian communities, and victims’ organizations that for decades have been at the forefront of the truth, reparation, and reconciliation movement. Unlike us, Generation Peace does not live in the fog of trauma, numbed by coping mechanisms.

Shortly before the plebiscite I talked with an older friend who was feeling pessimistic about the upcoming vote. “Peace will not go into reverse,” I assured her. In the same conversation, we shared how we have been crying since peace became a real possibility—tears of sadness and shame, rage and impotence, but also of joy and optimism, expectation and solidarity. This collective emotional cleansing abruptly ended on October 2 when the voting results gave No the victory. Those who believed Colombia was ready to say Yes cried our hearts out. People coined the term “plebitusa” to refer to the state of heartbreak in which the plebiscite left us, and “plebiscidio” to rant about the collective killing of the chance of peace the No vote represented. But then, young Colombians brought hope back to us. With clarity in their hearts and minds, Generation Peace is enticing Generation War to dispel the daze in which we have lived, wipe our tears, and join them on the streets to dream our future together.