Editor's Note: This article was originally published in the fall issue of the NACLA Report, which went to press in early August. 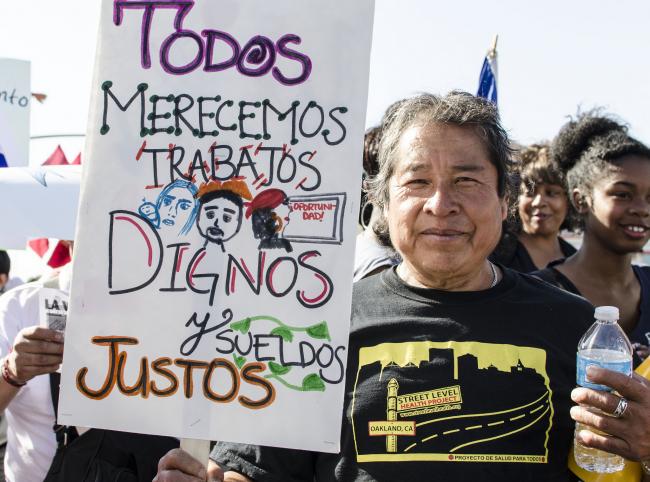 Latin@ voters, and Latinas specifically, played a decisive role in the 2008 and 2012 U.S. national elections and are once again poised to significantly impact the outcome of the 2016 election cycle. However, unlike the 2008 and 2012 presidential elections, 2016 is shaping up to be an election of extremes, and Latin@s have already become deeply embedded into the campaign strategies and political discourses of both major political parties, albeit in very different ways.

On the one hand, recognizing the growing share of Latin@s among the electorate—particularly in competitive swing states like Colorado, Nevada, New Mexico, and Florida—Democrats have made Latin@ outreach, mobilization, and incorporation central to their party architecture and election organizing at the national level. This is most notable within Democratic candidate Hillary Clinton’s presidential campaign, where Latin@ policy preferences—especially on immigration reform—have taken center stage and where a sophisticated and well-funded Latin@ outreach campaign, replete with multiple field offices in battleground states, has been in effect since 2015. Clinton and the Democratic National Committee (DNC) have also taken decisive steps to elevate Latin@ leaders within the party infrastructure, with Clinton hiring a number of experienced Latin@ political professionals, such as Amanda Renteria, Emmy Ruiz, Lorella Praeli, Gary Segura, and Matt Barreto to join her campaign and polling teams.

While Clinton’s primary challenger, Senator Bernie Sanders (D-VT), entered the race in May 2015 with scant name recognition and limited support among Latin@ voters, his campaign quickly made up for a lack of experience with his critique of economic inequality—a message that found a receptive audience among many young Latin@s. Sanders also brought several notable immigration activists into his campaign, including Erika Andiola, Arturo Carmona, Javier Gonzalez, and Cesar Vargas, as well as environmental activist Bill Gallegos. Democrats have also invested in the political leadership of Latin@ candidates with two high profile Latinas running in competitive Senate races in California and Nevada, as well as in over two dozen congressional races—many of them open seats—in California, Florida, Maryland, Nevada, New York, and Texas.

By comparison, while two Republican Latinos, Texas senator Ted Cruz and Florida senator Marco Rubio, competed unsuccessfully in the Republican primary, the only Senate race featuring a competitive Republican Latin@ is the Florida race that Marco Rubio initially vacated during his presidential bid, but which he has subsequently re-entered to face challenges by Florida Lt. Governor Carlos Lopez-Cantera and Pastor Ernesto Rivera. In addition, Latin@ Republican congressional candidates competed in just seven primary races: one in California (CA-46), three districts in Florida (FL-6, 9, and 26), one district in Nevada (NV-3), and two districts in Texas (TX-15 and 29). In only four districts (CA-46, FL-9, FL-26, and TX-29), will Republican candidates appear on ballots in November. Put another way, Latin@ Democrats competing in the House and Senate outnumbered Latin@ Republicans in 2016 by a margin of at least two to one.

In contrast to how the Democratic Party has engaged Latin@ constituencies, Latin@s have been racially targeted, demonized, and harassed in unprecedented fashion by Republican presidential candidates who have sought to mobilize white male voters. Eschewing recommendations from the Republican National Committee’s (RNC) political “autopsy” report, which was issued after the 2012 election and warned that the Republican Party must “change how it engages with Hispanic communities” and “embrace and champion comprehensive immigration reform,” 2016 Republican presidential candidates have made anti-immigrant and anti-Latin@ discourse a central feature of their campaigns.

No other candidate has embodied this demonization more than Republican nominee Donald Trump. Beginning with his depiction of Mexican immigrants as “criminals” and “rapists” when announcing his presidential bid in June 2015, Trump has made strategic racism aimed directly at Latin@s a defining pillar of his campaign. This has included Trump’s call for mass deportations of all “illegal immigrants” by reviving the military-style roundups of the 1950s, infamously known as “Operation Wetback.” According to Trump, mass deportations would include young people who came to the country as children and would be accompanied by both a massive surge of border enforcement and the creation of a 1,000-mile, fortified wall between the U.S. and Mexico, sometimes referred to as the “Great Wall of Trump.”

Even as Trump’s campaign gestured toward a more professional outlook in the final weeks of his primary campaign—hiring political professionals in lieu of inexperienced staff and delivering crafted speeches instead of extemporaneous and erratic prattle—his repeated attacks on Mexican-American judge Gonzalo Curiel of the Federal District Court in San Diego and his renewed calls to build a “great border wall” during the Republican National Convention—have made clear that his campaign’s demonization of Latin@s will not abate.

To be sure, Donald Trump hasn’t been the only Republican candidate to attack Latin@s or issues that are close to many Latin@ voters. Both Cuban-American senators Ted Cruz and Marco Rubio pledged during their campaigns to reverse gains made by DACA (Deferred Action for Childhood Arrivals); further limit Mexican immigration; enhance scrutiny, detention, and deportation of those immigrants who enter the U.S. without proper documentation; and punish states and localities that attempt to protect the rights of immigrants. Other former Republican primary contenders, such as Wisconsin governor Scott Walker, replicated Trump’s call to strip citizenship from U.S.-born children of undocumented immigrants, while Louisiana governor Bobby Jindal suggested that mayors of so-called “sanctuary cities” (localities that actively seek to uphold constitutional protections and due process rights of immigrants in the face of federal and state pressure to automatically deport suspected undocumented immigrants) should be held criminally responsible for the actions of undocumented immigrants who are released in their jurisdiction.

The platform was matched by a steady stream of anti-immigrant rhetoric delivered at the Republican National Convention that echoed Trump’s nativist fervor with renewed calls to put “Americans first.” Former Florida governor Jeb Bush stood alone among serious Republican primary contenders in his defense of an immigration policy that wasn’t merely punitive, and a handful of Republican senators and governors sought to distance themselves from Trump’s racism when the political costs became apparent. But even these relatively moderate voices on the right have been drowned out by the cacophony of Republican candidates calling for additional restrictions on immigrants and immigration and constructing Latin@ immigrants as a racialized threat to the United States, in need of containment and/ or removal.

The results of this polarized campaign environment are evident in the increased turnout of Latin@ voters in the Democratic primary, and especially in the increased distance between Latin@ voters and the Republican Party, more broadly. Polling conducted by America’s Voice/Latino Decisions in April 2016 found that over 60 percent of Latin@ voters held favorable views of both Hillary Clinton and Bernie Sanders, while 87 percent of Latin@ voters responded unfavorably to Donald Trump. Even among self-identified Latin@ Republicans, 73 percent responded to Trump unfavorably and 56 percent held unfavorable views about his top challenger at the time, Senator Ted Cruz. Much has been made of Hillary Clinton’s unfavorable ratings, which registered at 32 percent among the more than 2,000 Latin@ voters surveyed in April, but even those numbers pale in comparison to the 55 point difference in favorability between her and Donald Trump.

Another indication of the depth of anti-Trump sentiment has been the emergence of new words and cultural artifacts among Latin@s in the U.S. and Latin Americans. Trump piñatas and sales of villainous Trump masks have soared. Anti-Trump video games and videos have proliferated on Facebook, YouTube, Instagram, Snapchat, and other online sharing mediums. In June 2016, the New York Times reported on the emergence of a new word, trumpear, among Spanish speakers—a play on the Spanish verb trompear, which means “to hit” or “to punch.” And satirical skits involving Donald Trump have become common in the election lexicon of Spanish language radio, television, and popular culture. At the same time anti-Trump protests have garnered worldwide attention in cities with a history of Latin@ political mobilization, including Phoenix, Los Angeles, and San Jose.

Unsurprisingly, polling among Latin@ voters suggests that the negative sentiments expressed by Latin@s toward Trump and even Ted Cruz translate into negative assessments of the Republican Party, more broadly. As political scientist Lynn Vavreck, writing for the New York Times’ Upshot, recently noted, Trump has become the “damager-in-chief to the [Republican] Party reputation” among Latin@s. In other words, Trump’s attacks on Mexicans and Latin@s, as well as his refusal to support key immigration measures important to Latin@ voters, such as DACA and DAPA, not only dissuade Latin@ voters from supporting him but elongates the existing chasm between them and the Republican Party.

What’s more, evidence suggests that Trump’s relentless demonization of Latin@s is energizing Latin@ voters for the general election. According to the April 2016 America’s Voice/Latino Decisions poll, 48 percent of Latin@ voters indicated they were more enthusiastic about voting in 2016 than they were about voting in 2012, and 41 percent said they specifically wanted to vote in November to stop Trump. Similarly, polling among Latin@s during the four-day RNC found that 85 percent of Latin@ voters believe the convention worsened the image of Donald Trump and the Republican Party with only 13 percent of Latin@ voters indicating they would vote for Trump. Among a population that has struggled to maximize its voting power in years past, anti-Trump sentiment is serving as a major catalyst to mobilize turnout, which will inevitably be problematic to both Trump and the Republicans. Thus, while previous campaigns, such as the 2014 mid-term elections, saw a decrease in Latin@ turnout as both Democrats and Republicans distanced themselves from immigration reform, in 2016, Republican backlash against immigrants and Latin@s could hand Democrats both the White House and control of the U.S. Senate.

Anna Sampaio is an associate professor of ethnic studies and political science at Santa Clara University. She is the author of Terrorizing Latina/o Immigrants: Race, Gender and Immigration Politics in the Age of Security (Temple University Press, 2015).