Cuba After the Gold Rush

What has been the role of U.S. commercial interests in ending the U.S. embargo on Cuba?

This article was originally published in the fall issue of the NACLA Report. 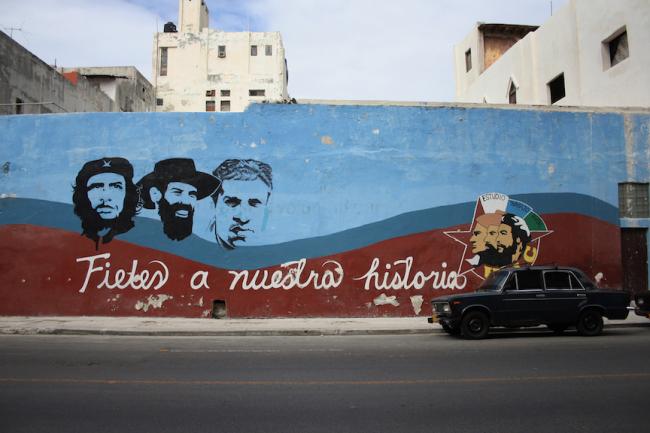 In its half-millennium of history, one lesson Cuba has learned repeatedly, and often painfully, is that gold draws a crowd. History tells us that after the Spanish conquest in 1511, the invaders quickly discovered gold in the streams found in the island’s central highlands. Prospectors rushed in, stayed for a decade, and were then drawn to Mexico. Nevertheless, Spain dominated Cuba politically and economically until the end of the nineteenth century. It was then that the United States entered into Cuba’s War for Independence, evicting the island’s longstanding colonial power and triggering yet another rush for riches.

“Cuba beckoned” at the turn of the twentieth century, as the historian Louis Pérez noted in his landmark volume, On Becoming Cuban: Identity, Nationality, and Culture. The island represented not only a priority for U.S. hemispheric ambitions, but also “opportunities for the taking, quick returns and high yields.” As such, it was depicted variously as a “virgin land,” a “new California,” and a “veritable Klondike of wealth.”

Even after Cuba’s 1959 revolution, and the embargo on trade, which the United States promptly imposed in response, big U.S. corporations returned just a few decades later on prospecting missions. In 1996, Pamela Falk, writing in the flagship journal of the Council on Foreign Relations, Foreign Affairs, reported on the arrival in Cuba of the chief executives from General Motors, Sears, Avis, Hyatt, and Sheraton. “Increasingly, these firms like what they see of the Cuban economy and grouse openly at what they are denied by the U.S. embargo,” Falk wrote. “Corporate leaders are lobbying the president and his advisers, as well as key Members of Congress, every chance they get.”

Twenty years later, when Barack Obama made his historic trip to Cuba in March 2016, the U.S. president was joined by billionaire Warren Buffett, the U.S. Chamber of Commerce, the presidents of PayPal and Airbnb, and the corporate leaders of airlines, hotels, and other U.S. industries. Many came to Cuba to profit from the executive actions taken by the President to expand travel and trade and ease restrictions on U.S. firms trying to set up operations in Cuba. Their presence in the delegation was central to the visit’s stagecraft and sent a strategic statement by the White House about the legislative business that remains unfinished in the U.S. following the President’s bold decision in December 2014 to begin to change U.S. policy toward Cuba.

Although Cuba and the United States restored diplomatic relations in 2015, Cuba insists it will not consider normalization complete until the U.S. Congress lifts the trade embargo that the U.S. imposed in 1962. Cuba’s president Raúl Castro made this clear as he stood side-by-side with President Obama at their March 21, 2016, news conference in Havana. “The blockade is the most serious obstacle to our economic development and the welfare of the Cuban people,” Castro stated. “Therefore, its elimination will be essential to normalize bilateral relations.”

President Castro’s insistence that the U.S. end the embargo did not herald an indiscriminate return of capitalism to the island. Nor did it simply restate Cuba’s long-standing grievance—echoed annually in a resolution adopted by near-unanimous majorities in the U.N. General Assembly since the early 1990s—that the embargo threatens its sovereignty. Instead, the government’s demands are rooted in the pragmatic belief that commerce with the U.S. private sector must be restored to generate the foreign exchange its economy needs—even if that means losing ground now in cardinal areas of concern, like income inequality, in order to extend Cuba’s revolutionary project well into the twenty-first century.

If investment by U.S. business is now seen by Cuba as instrumental to its economic revival, the business lobby’s influence with policymakers in the U.S. has long been regarded as essential to any credible strategy aimed at convincing Congress to lift the embargo. While U.S. business groups, dating back at least to the 1990s, formed coalitions against various aspects of U.S. policy toward Cuba, no sector has taken this task as seriously as American agriculture. It was not until President Bill Clinton signed the Trade Sanctions Reform and Export Enhancement Act (TSRA) in 2000, after years of pressure by farm groups and humanitarian organizations, that Congress enacted a limited exception to the embargo to legalize one-way, cash-only sales of food and agriculture products to Cuba.

While food grown on U.S. farms began to find its way onto Cuban tables in 2001, TSRA prohibitions on government credits and private financing for any sales have limited the extent of U.S. food exports to the island. These limits are still being debated today. Still, on issues ranging from ending the ban on tourist travel to lifting the embargo itself, farmers and farm interests have been consistent allies of the growing anti-embargo coalition.

Beyond agriculture, the coalition to end the embargo has sought to recruit other respected business voices to speak authoritatively to Members of Congress about the economic advantages of lifting the trade embargo. This is often done by linking increased trade with Cuba to the prospect of greater profits for U.S. businesses or the availability of new jobs for American workers. Against Cold War-era hardliners and those who favor tightening sanctions as a means of overthrowing the Cuban system, business leaders have had the unique ability to speak for the anti-embargo coalition’s position that U.S. foreign policy values would be best served by expanding economic ties to Cuba and by ending the embargo.

After December 17, 2014, when the U.S. announced its diplomatic breakthrough with Cuba, President Obama elevated business’s role in his normalization policy. He used his 2015 and 2016 State of the Union addresses to call on Congress to end the Cuba trade embargo. He has opened new legal channels for U.S. companies to prospect for “deals” on the island—not only to pursue profits but also to advance the interests of the Cuban people. By giving more businesses the “green light” to get into the Cuban market, the White House hopes this will give the U.S. private sector more “skin in the game” to stand up and be counted as supportive of the President’s new policies toward Cuba. To many of us in the anti-embargo coalition, every deal consummated in Cuba contributes to the goal of making that policy irreversible, no matter who succeeds President Obama.

These new circumstances should increase the effectiveness and eagerness of U.S. business in driving up support in Congress to lift the embargo. But the momentum behind a larger business role and louder business voice in the debate has been slow to build. This is due both to factors endemic to Washington and unique to Cuba.

Starting in 1993, Representative Charles Rangel (DNY) began sponsoring legislation to end the embargo. Neither his legislation, which has been introduced in each subsequent Congress, nor bills introduced by other Members of the Senate and House with the same anti-embargo bent—including those introduced in 2015 by Senators Amy Klobuchar (D-MN) and Jerry Moran (R-KS) and by Representatives Tom Emmer (RMN) and Kathy Castor (D-FL)—have moved past the committees to which they were sent. No coalition, with or without business support, has been able to pry them out after decades of work.

Sarah Stephens is the executive director of the Center for Democracy in the Americas. For more than 15 years, she has focused on securing the kinds of decisive changes in U.S.-Cuba policy initiated by President Obama beginning on December 17, 2014. She is now devoted to making those new policies work—for U.S. travelers and U.S. businesses, for civil society partners on both sides of the Florida Strait, and for the Cubans who stand to gain the most from a respectful relationship with the United States—in addition to normalizing relations going forward.