Facing extreme budget cuts by the illegitimate government of President Michel Temer, student activists are occupying schools in the name of public education. 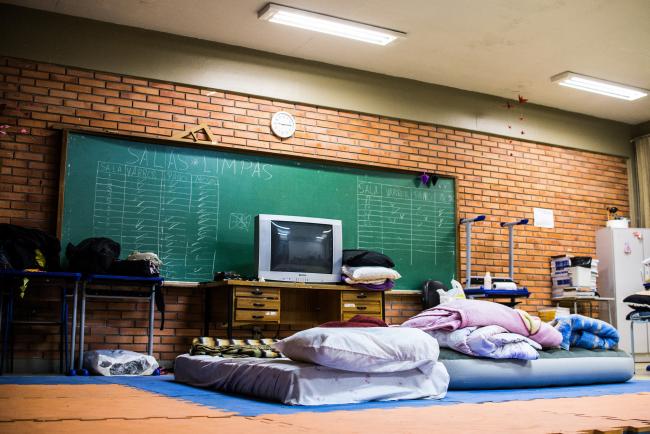 Ana Júlia, a high school student in Curitiba, Brazil, might be considered the name and the face of hope in Brazil today. On October 26, the 16-year-old gave a poignant speech in front of members of the Paraná State Assembly, in which she defended the occupation of the Colégio Estadual Senador Manoel Guimarães, a local high school in the state’s capital city. Ana Júlia’s strong defense of public education has since gone viral, and she has quickly come to represent a last stand against the public expenditure cuts being proposed by the new Brazilian government that replaced ousted president Dilma Rousseff.

Occupations of public high schools and universities have become one of the main forms of resistance to the new conservative administration of Michel Temer, which, since the conclusion of Rousseff’s highly controversial impeachment proceedings on August 31, serves as the official government of Brazil. Today, more than 1,000 schools have been taken over by students in a movement that started in São Paulo but which, over the last month, has spread to different parts of the country. When asked about the motivations for the takeovers, Ana Júlia and her peers have consistently stated that their principal desire is for a better-funded public educational system—one that is focused on preparing them for a future in a country increasingly mired in economic crisis and rising political polarization.

Though many in Brazil’s mainstream media have criticized the occupiers as somehow being manipulated by leftist political organizations, student demonstrators across various occupations have consistently denied any party affiliation, emphasizing instead their independent political stance and their demand for a basic social right to a decent education. In Ana Júlia´s words, “Our only position is in favor of education. Ours is a non-partisan movement, by students and for students.”

In response to the protests, the Brazilian Ministry of Education, which controls the bulk of higher education institutions, has been quick to demand the names of students occupying different facilities across the country. Ministry officials have also promised to retaliate against those leading the occupations, as well as administrators who do not comply with the set requirement for listing and turning in the names of protesting students.

Brazil has never had an effective educational structure. Even when investments have been made into the system, more commonly than not such funding has been siphoned into the country’s federal and state universities, from which the children of the national and regional elites have traditionally graduated. While the last 20 years have shown some promising signs in terms of higher enrollments in elementary schools and accessibility to schooling for students from non-elite and middle-class backgrounds, most of this progress can be attributed to only slightly higher levels of investment and the creation of new standards. In other words, much more profound reforms remain to be pursued. Unfortunately, should the Brazilian Senate approve the Temer government’s controversial PEC 241 constitutional amendment, the expansion for budget expenditures for the next 20 years would be prohibited, and Ana Julia and her peers’ demands for better education will probably have to wait another generation. The amendment has already been approved by Brazil’s Chamber of Deputies. 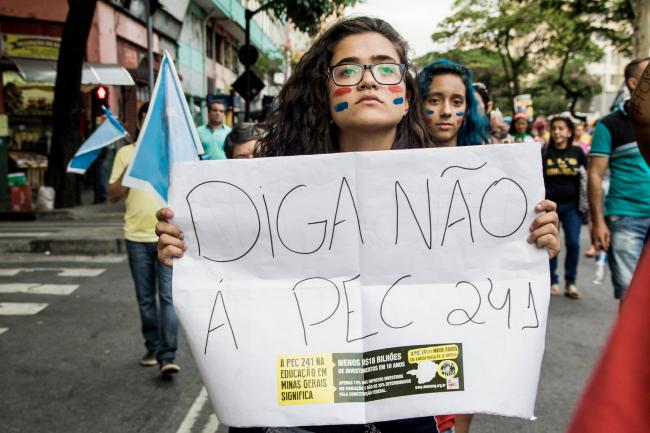 Temer’s government argues that the PEC 241 amendment is necessary given the current fiscal crisis afflicting the country. Though the budgetary difficulties are undeniably real, current Brazilian problems are not restricted to the economic realm but rather spill over into the political, social, and even cultural spheres of the country. The political quagmire started in full force right after Dilma’s reelection in October 2014, when her then opponent, opposition senator Aécio Neves, refused to recognize his loss. The senator began calling people to take to the streets in order to pressure other politicians to find a way to remove the PT from power. The justification put forward to carry out such a plan were the questionable, though commonly performed, accounting practices of Dilma’s government. The Rousseff administration had allocated unapproved temporary budget allocations from public banks to cover social expenditures. Though this money would be later paid back with interest, the move was initially declared illegal by Brazil’s TCU, an agency similar to the Congressional Budget Office in the U.S. In what now appears to have been a highly orchestrated political offensive against the Brazilian Left the opposition in the Brazilian Congress, together with large media conglomerates, painted this action as an impeachable offense.

Of course, such a questionable course of action taken by the anti-PT opposition only further polarized the political environment in Brazil. Dilma’s impeachment, which many on the political left have denounced as a coup, has also created a widespread sense of electoral apathy—something that was demonstrated clearly in the country’s October municipal elections. Despite the fact that voting is obligatory in Brazil, voters in many cities decided to either not vote or annul their vote, rather than cast their ballot for any of the candidates listed.

Brazil today seems to be experiencing a bad political hangover after its seeming fall from grace—a not-so-long-ago period in which ex-president Lula da Silva’s approval ratings were among the highest in the world. And it is anyone’s guess as to where things are headed next.

However, each day certain elements of the current political environment are becoming slightly more clear. First, it is now undeniable that the country is witnessing its strongest conservative backlash in decades—one defined by new and increasingly overt forms of racism, the rising political power of religious fundamentalism, and a renewed defense of authoritarian rule. What’s more, the neoliberal anti-politics” rhetoric praising a minimalist state is on the rise. This is a fact that is particularly well embodied in the Temer administration’s likely approval of PEC 241 and its pursuit of radical austerity. Finally, in the absence of political answers to the current crisis, the Brazilian judiciary has begun to rely on its own judgment, rather than on the established legal codes, when deciding what is acceptable or not in terms of evidence and acceptable investigative procedure, actions indicating  a dangerous path toward judicial overreach and the deterioration of judicial independence.

Similarly, the pendular nature of the current political climate is becoming ever more notable in Brazil. When the results of municipal elections this past month were tallied, the Brazilian Social Democracy Party (PSDB), an opposition party that has lost in all presidential elections since 2002, together with Temer’s Party of the Brazilian Democratic Movement (PMDB) and the evangelical right, won the most votes. This was as clear a sign of any of the growing power of the conservative backlash. Yet, politicians close to Temer, including the Senate president, Renan Calheiros, now find themselves under investigation and recent rumors have circulated that Temer himself might be the next person to be removed from office, due to corruption he was implicated in during the 2014 reelection. If this indeed takes place,  indirect elections would be held by the Brazilian Congress who would choose the country’s next president, rather than Brazilian voters.

The student-led occupations of hundreds of schools and universities across the country are symbols of the continued resistance to these formidable challenges and provide one model for a path forward. But the repression the occupations now face suggest that social movements’ struggle to take on the policies and actions of Brazil’s New Right will be a long and difficult one. In early November, a federal judge approved the use of “torture techniques,” including use of loud music to prevent occupiers from sleeping. The police have also blocked the delivery of food to student protesters, have prohibited contact between occupiers and their family members, and have forcibly removed some students and their allies from occupied school property. Although many social movements have expressed support for the occupations, Brazilian media outlets and most politicians in power have continued to express their disdain for actions taken by Ana Júlia and her classmates around the country.

At the time of this article’s writing, Ana Júlia and her friends are still in their occupied school. And catching both those on the political Right and Left by surprise, the student movement that Ana Júlia has helped galvanize now has the potential to move beyond the walls of the school to reenergize progressive social activism in Brazil, more generally. Grounded in the real concerns of a growing sector of the population, students´ grassroots mobilization offer hope for breaking apart Brazil´s ossified and frequently corrupt political parties. Much of what happens next will depend on where most Brazilians position themselves vis-à-vis the occupations in the coming few weeks.

The question now is: Beyond the many “likes” she has received on social media and her rising celebrity status, will the demands that Ana Júlia has come to embody find support with a broader cross-section of Brazilian society, or will her movement be engulfed in the media-driven, conservative backlash that still appears to be deepening in the country?

Rafael R. Ioris is Associate Professor of Latin American History and Politics at the University of Denver.