Resisting Trump: What's Next for the Immigrant Rights Movement

Immigrant rights activists are digging in their heels for a hard fight, including reforms at state and local levels.

This piece was originally published at Truthout. 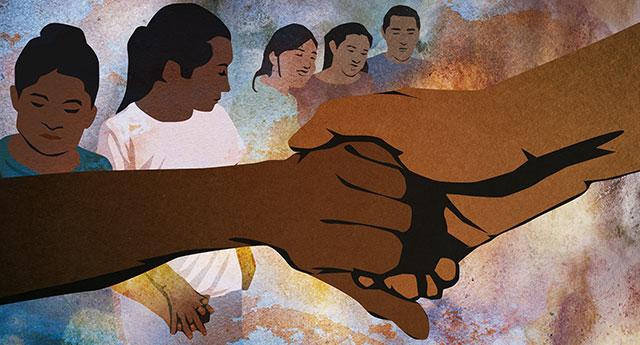 After building a fierce grassroots movement and turning out voters in record numbers, immigrant communities have been struck with a mix of panic, anger and confusion as a divided nation prepares for President Donald Trump. Now, advocates are digging in their heels for a hard fight, and both immigrants and their allies are hurrying to make preparations before Trump takes office.

"It's important to note that he's not president yet," said Kamal Essaheb, policy and advocacy director at the National Immigration Law Center.

Trump will not be inaugurated for another two months, and Essaheb said there are concrete things individuals can do to prepare in the meantime. For undocumented people, these preparations include contacting a qualified legal services provider to be screened for immigration relief options before Trump takes office. Immigrants should also know their rights when encountering law enforcement.

Essaheb said the Constitution guarantees everyone, including undocumented people, the right to refuse warrantless searches, to remain silent, to speak with an attorney and to request identification from officers from all branches of law enforcement, including the U.S. Border Patrol and Immigration and Customs Enforcement (ICE).

"Donald cannot take away the Constitution; he cannot take away people's rights," Essaheb said. "There are things that he can do on immigration that are harmful, and he's signaled that he will do some of those, but I think we all need to be advocates as immigrants ... and there are things we can do to prepare for them and engage in that fight."

Meanwhile, the immigrant rights movement, which built considerable grassroots power during the Obama administration, is readying itself for a president who demonized immigrants on the campaign trail. Many activists are gearing up to shift their focus from Congress and the White House to cities and states.

For now, advocates have generally given up on the federal immigration reforms that Congress failed to pass during the Obama administration. As Congress stalled, President Obama bowed to activist pressure and issued executive actions establishing protections for some undocumented people, but Trump has pledged to reverse those orders with his own.

Trump has put out a 10-point immigration plan and brought in anti-immigrant politicians to help build his administration, such as Kansas Secretary of State Kris Kobach, who designed harsh "enforcement through attrition" laws such as Arizona's infamous SB 1070. Kobach also helped develop a controversial post-9/11 Department of Justice program that required Muslim and Middle Eastern visa holders to register with the government and be fingerprinted, and he has suggested that the program could be reinstated to satisfy Trump's calls for "extreme vetting."

Advocates are still waiting on Trump to fill key posts at the Departments of Justice and Homeland Security. Essaheb said that hiring someone like Kobach, who is reportedly a candidate for attorney general and has been accused of voter suppression in his home state, would be "unacceptable" and a sign that Trump is not serious about moving policy ideas forward and seeking unity after a divisive campaign. However, Essaheb said it's still unclear exactly what Trump will do as president.

Trump's boldest ideas, such as building "the wall" on the Mexican border and rapidly deporting or jailing up to three million undocumented people with criminal records because they are supposedly "drug dealers" and "gang members," rallied right-wing voters to his cause -- and ballooned his reputation as an overt racist. But these ideas would be costly and may become increasingly unpopular as the nation wakes up to the reality of systematically tearing millions of families apart.

"There are some Republicans who are already out there saying, 'No, no, no, when [Trump] talks about immigrants, he's not talking about going door to door to pick people up,'" Essaheb said. "But he needs to say that [himself], because obviously there is a lot of anxiety in certain communities."

Trump's claims, such as his repeated statement that roughly a quarter of the 11 million undocumented people in the US are "criminals," are based on sketchy numbers. Studies show that immigrants are less likely to break the law than native-born residents, and many are deported for nonviolent crimes and even traffic offenses. And Trump's statements about forcing the Mexican government (or reluctant U.S. taxpayers) to cough up the money to build a "big, beautiful wall" along the southern border do not appear to be grounded in a firm understanding of economics or international relations, much less the reality on the ground.

Of course, the idea that people convicted of crimes should be deported was already being challenged before Trump hit the scene. Numbers aside, Trump's current deportation proposal is not much different from policies set by the Obama administration, which refocused deportation efforts on undocumented people with criminal records, after coming under heavy pressure from activists angry over the record number of deportations taking place. Democrats hailed the policies as proof that the party was sticking up for immigrants, but the government continued to rip families apart over nonviolent crimes, such as drug possession.

Sally Kinoshita, deputy director of the Immigrant Legal Resource Center (ILRC), said that even a minor drug charge or a DUI could have "irreversible consequences" under the Trump administration. Some states, including California, have programs for improving criminal records, such as reducing a felony conviction to a misdemeanor. Immigrants and undocumented people who've been convicted of crimes should pursue such options now, according to advocates.

It's still unclear when and how Trump will roll out deportation initiatives, but other proposals could harm immigrants and their families immediately.

Trump has pledged to repeal Deferred Action for Childhood Arrivals (DACA), Obama's initiative that made it easer for undocumented people who immigrated as children to stay in the US to work and study. DAPA, a similar program for parents of U.S. citizens and permanent residents, was blocked by a court injunction last year, but DACA remains a legacy of the DREAMer movement that continues to protect hundreds of thousands of youth from deportation.

Kinoshita said that under the "worst-case scenario," Trump would throw out DACA when he takes office in January. Initial DACA applications typically take more than three months to process, so paying the filing fees and submitting the application now may result in no benefit and could expose individuals' identities to authorities. Administrative programs like DACA have never been used to identify and target immigrants for deportation wholesale, Kinoshita said, but Trump is unpredictable.

Applications for DACA renewals, on the other hand, take about two months, and it's unclear whether Trump will terminate all DACA grants or simply block recipients from renewing. Filing for a renewal now, while Obama is still in office, could possibly secure a new  grant that would last into the Trump presidency, and the risk is low because current recipients are already known to the government. (To learn more,check out ILRC's FAQ and DACA resource page, which includes information on financial assistance.)

"Anyone who's in the country undocumented, whether DACA eligible or not, should go to a legal services provider now to be screened to see if they are eligible [for] any other existing immigration option other than DACA," said Kinoshita.

Kinoshita said that about 15 percent of the people who seek help applying for DACA status discover that they are actually eligible for something more permanent, and this online directory could help low-income people find reputable providers of free and low-cost legal services.

Losing DACA would deal a blow to the immigrant rights movement and its youth, who mounted a daring and effective campaign to pressure Obama into action as it became clear that Congress would not come to an agreement on immigration reform. But don't expect the movement's momentum to recede under Trump.

A Time of Resistance

Immigrants and their allies have already become central to the protest movement against Trump. After all, protest, direct action and community organizing have defined their grassroots movement for years. Activists have challenged racist laws in states like Arizona, the jailing of undocumented people under poor conditions in privately run prisons, and deportation initiatives under the Obama administration that brought ICE and local police together to remove people from the country at record rates.

Some of this activist spark seems to have rubbed off on progressive politicians in cities and states across the nation. Trump has threatened to unilaterally withhold funding from so-called "sanctuary cities" where police are not supposed to collude with immigration enforcement officials, but leaders in cities, such as New York, Los Angeles, Seattle and Chicago, where voters largely rejected Trump, have declared that they will continue to protect all of their residents, regardless of their immigration status or skin color.

Kinoshita and Essaheb said such threats from anti-immigrant politicians are nothing new.

"There have already been attempts to defund what are so-called sanctuary cities, and there certainly has been resistance," Kinoshita said. "I think resistance is going to be really a theme of immigrant rights advocates over the coming years."

Essaheb said Trump's threats have the potential to drive a wedge between some communities, but efforts on Capitol Hill to punish cities that made life easier for immigrants and undocumented people have already backfired.

"Just earlier this year, the Senate tried to pass a bill that would deny housing funding to certain jurisdictions if they did not undo some of these policies," Essaheb said. "And, we won that fight -- we won that fight as an immigrant rights movement with the support of housing advocates, with the support of civil rights groups, and groups representing the Black communities, so it actually ended up bringing groups together."

Essaheb and Kinoshita said that, even with the federal government in Republican control, there are plenty of reforms that city and state governments can do to make life better for immigrants. For example, many states and cities have already made it easier for undocumented people to obtain a driver's license or access healthcare and higher education by requiring clinics and schools to keep their records confidential.

Essaheb said that those of us who share similar values are going to be "under attack" for the next few years, but his gut tells him that fighting back will bring neighborhoods and movements together.

"I think this is bringing out the fight in people, and it's bringing out a sense of community and unity amongst those of us that see America a certain way, that see America as a pluralistic society that respects the rights of all people, regardless of the color of their skin or where they were born," Essaheb said. "So, it's a long fight ahead, but I think we're ready for it."

Mike Ludwig is an investigative reporter at Truthout and a contributor to the Truthout anthology, Who Do You Serve, Who Do You Protect? Follow him on Twitter: @ludwig_mike.