Trump and Immigration: A Crisis of His Own Making

Trump rides into the White house with a convulsive immigration plan dipped in a soup of nativism, Islamophobia, and anti-Mexican sentiment. What will happen next? 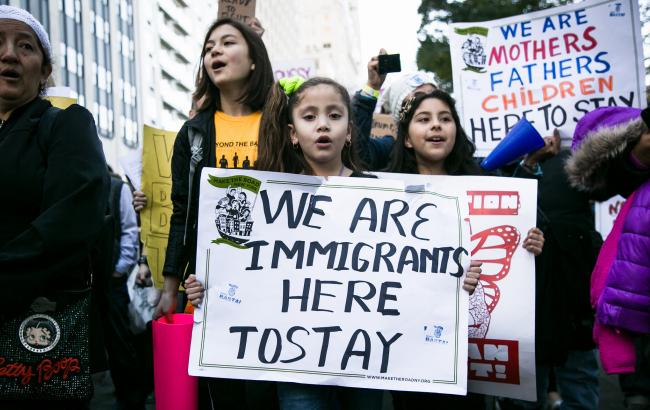 The election of Donald Trump is jolting the nation and inspiring a range of responses from dread and reignited social activism from his opponents to aggressive optimism and hateful acts by supporters of the president-elect. One of the key areas of policy that Trump rode to the White House was a convulsive immigration plan dipped in a soup of nativism, Islamophobia, and anti-Mexican sentiment. He tapped immigration like an ATM, drawing currency as needed, occasionally backpedaling, but calling upon a recycled message of xenophobia at will.

Everybody's question seems to be, 'what will happen next?' Will his bevy of odious campaign promises come to fruition or will he temper his projected plans—turn his wall into fence, for example—or simply follow the whims of his transition team's competing list of right-wing carpetbaggers? That the Republican Party that obstructed eight years of the Obama administration might be the only moderating force in this scenario is frightening.

The reverberations of Trump's various proposals are palpable in Mexico. While the Mexican government has urged its nationals in the U.S. to "stay calm" and "to not fall to provocations,” in Central America, El Salvador, Guatemala, and Honduras have jointly registered their national anxieties.

The Trump position on immigration is an unstable cauldron of anti-immigrant proposals and language, meant to curry favor with voters and supporters. On occasion, he softens his message to maximize pandering. The key articulations of his plans thus far include his campaign website, a major pre-election speech on immigration, and his post-election "60 Minutes" interview.

The three pillars of his plans so far include a massive and immediate deportation effort, a registration program for Muslim immigrants and visitors, and the revocation of all of Obama's executive orders – which include DACA (Deferred Action for Childhood Arrivals), a program that postpones deportations for a select group of undocumented youth. This would also include repealing DAPA (Deferred Action for Parents of Americans and Lawful Permanent Residents), which would offer deportation relief, for a larger group of undocumented parents of U.S. citizens and permanent residents— an order that has already been blocked by the courts and was never enacted.

During his post-election "60 Minutes" interview, Trump vowed to deport persons that "are criminal" and "have criminal records," taking a page out of Obama's "felons not families" playbook, which promised to prioritize deportations for undocumented immigrants with criminal records. "We are getting them out of the country and we are going to incarcerate," said Trump, necessitating an estimated construction of 100,000 new prison beds in the first year of his presidency alone. (As such, Trump has enthusiastic support from the private prison industry.) That persons with criminal records can be deported is hardly debatable from a legal standpoint, as this has been Obama's policy throughout his administration. Trump's estimate of these enforcement targets—two to three million persons—however, is exceedingly high, especially considering the Department of Homeland Security has already deported 2.4 million unauthorized immigrants under the Obama administration. Studies suggest that convicted persons (many already behind bars) add up to about 820,000 of the 11 million undocumented population, with only 300,000 felons and 390,000 persons with serious misdemeanors.

Trump will have to remove far more families than felons in order to deport his arbitrary target of two to three million people. This is in line with Trump's nebulous claims that "They're here illegally" or "are criminal," which suggest a state or condition of criminality or undesirability without any real attachment to actual criminal convictions. These are exactly the kind of unfounded charges that Trump used throughout his campaign to inspire animosity on a national scale. In this vein, one of Trump's advisors, Kansas Secretary of State Kris Kobach, has also suggested that some immigrants could be deported simply for being charged with but not yet convicted of crimes.

Kobach also speculated that the Trump administration could reinstate the Bush and Obama-era National Security Entry-Exit Registration System (NSNEERS) that registered Muslim visitors from "high risk" nations after 9/11 through 2011. Kobach is the architect of NSNEERS, anti-immigration laws around the country, voter registration laws, and has been advising the Trump campaign and transition team. Another Trump supporter and proponent of a Muslim registry, Carl Higbie, cited the internment of Japanese Americans as legal "precedent" for such an action, stating, "We've done it based on race, we've done it based on religion, we've done it based on region."

Migrant registries are often a prelude to extreme enforcement actions, and have been used in some of the darkest eras of U.S. history. It was used during the period of Alien and Sedition Acts in the late 18th century, causing widespread hysteria. Registration was required for Chinese immigrants at the turn of the 20th century, leading to boycotts and civil disobedience. It was targeted at Germans during World War I, leading to their internment and notoriously used against Japanese prior to World War II, leading to internment of migrants and U.S. citizens with Japanese origins after Pearl Harbor. Finally, after 9/11, Muslim men participated in a "special registration, leading to detentions and deportations. In each of these cases, the government institutionalized harsh treatment against select groups of migrants and established a widespread stigma that endangered them on a daily basis.

Trump's most immediate power in immigration matters is the executive repeal of Deferred Action for Childhood Arrivals (DACA). It would be a clear political rebuke of Barack Obama. With a stroke of a pen, likely on his first day in office, Trump could end the deferred deportations of 740,000 young adults brought here as children. In addition to making them vulnerable to deportation, their work permits would dissolve and in some cases, their ability to pay in-state college tuition and drive lawfully. Talk of the demise of DACA has catalyzed a movement to provide sanctuary at colleges and universities nationwide. DACA is highly symbolic, and slashing it would provide an easy way for Trump to follow through on promises to his supporters, just as passing it did for Barack Obama and his followers in 2012.

When it comes to immigration matters, Donald Trump is sitting at the table set by Obama and his predecessors. Most of the incoming administration's proposals represent a raging form of the status quo—policies and enforcement priorities established by the Bush and Obama administrations, and based on enforcement powers established under Bill Clinton. Trump's immigration regime, despite its contempt and hurtfulness, will be an extension of his predecessors.

Obama's "felons not families" pecking order has been taken up by the Trump administration and will be interpreted expansively. Crime and "illegality," as well as relief from deportation, are political instruments, easily stretched for partisan and financial gain, by any party. Obama, for his part, used relief from deportation to appeal to his own supporters. He dangled the possibility of deportation relief to immigrants and supporters from the early days of his administration, while primarily pursuing immigration enforcement policies in order to bring Republicans to the table. He continued to delay DACA and DAPA until deploying it was politically expedient.

Meanwhile, Trump uses immigration as a political football to gain approval from his own supporters. To be sure, he casts his own unique signature upon immigration. He has taken anti-immigrant rhetoric to new lows and casually overlooks evidence about migrants in favor or stirring up fear and alarm among constituents. Harsh language against vulnerable communities thrills his legions of supporters and inspires their random violence in the name of patriotism. While it remains to be seen what he will do once actually in office, the possibilities are alarming.

Trump and his supporters' explicit list of enemies is long: undocumented immigrants (with a special loathing for Mexicans), LGBTQ persons, Muslims, Jews, people of color, women, union members, the disabled, and more. The scale of post-election animosity extends to persons who are perceived to be part of these vulnerable communities, those with affinities to them, or the activists demonstrating on their behalf. Demonstrators and activists, in particular, inspire a special brand of vitriol from the Trump camp. Whether Trump acts forcefully or not on immigration is not the only point. His reckless behavior from the outset of his campaign through today has already changed the social climate and inspired supporters to act on their own racist initiatives.

Operationalizing a policy focused on a goal like fighting crime masks the racial targets of U.S. enforcement policy. These efforts weigh heavily and unequally on the usual suspects, with glaring racial outcomes, sensationalized and symbolic enemies, and collateral damage to uniquely vulnerable people. Trump's immigration plans will tear away at our communities and protect nobody because they are not meant to protect but designed create vulnerability in society. Immigration, for Trump, is a vehicle to stigmatize people, instill fear in others, and elevate white constituents along a racial hierarchy designed to make up for the economic bump that will never arrive.

If you look at the history of immigration policy in the U.S., enforcement surges are usually coupled with a variety of security "crises," real or imagined—health scares, political assassinations, military campaigns, refugee streams, or "wars" on crime, drugs, and terror. What's different about the incoming administration in relation to the history of mass deportation is that it is operating without a crisis. The crisis is the Trump administration itself.

David Hernández is Assistant Professor of Latina/o Studies at Mount Holyoke College. He is the co-editor of Critical Ethnic Studies: A Reader (Duke 2016) and is completing a monograph of the institution of immigrant detention in the United States.