Drought and political divisions are limiting access to water in the Cochabamba Valley. Will social movements mobilize again to protect this basic right? 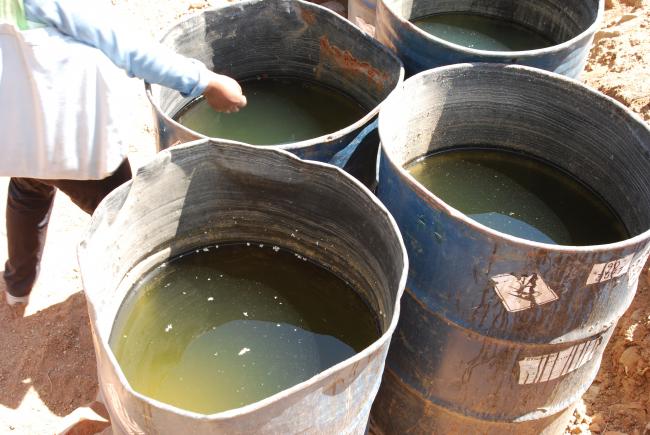 “They’re charging for air,” laments a Cochabamba resident. It is July 2016, and a serious drought has affected Cochabamba and its surrounding municipalities. After the levels of the reservoirs and subterranean waters dropped by 30%, Semapa, the municipal water company, has begun rationing water. To add insult to injury, residents are being overcharged due to antiquated meters that erroneously register airflow. Other residents contest Semapa’s “solidarity” tariff structure, which applies a flat rate for sewage and water services whether or not municipal water is received at all. Sixteen years after the Water War in Bolivia, tariff issues and unequal access continue to plague Cochabamba’s water sector.

Semapa barely reaches half of the residents in its jurisdiction. Most of the 74,000 aqua connections are limited to high and middle-income families that reside in the north and central zones of the city. The rest of the population in the southern outskirts are generally not connected to the municipal service and have built community-run systems for their potable water. Some neighborhoods have drilled their own wells, but most rely on aguateros, cistern trucks that deliver water of dubious quality pumped from privately owned wells located in the north of the city. A recent study conducted by Bolivia’s Health Department found that only three out of 50 of these wells—just six percent—met the standard for safe drinking water, and only 69 of the 400 aguateros that operate in the city have proper authorization.

Water Is Not for Sale

The aguateros function in a free-market economy, pricing water according to the demand and geographic distance of their clients. The drought works to the aguateros’ advantage because of increased demand, and users have claimed that prices have spiked anywhere between one and twenty Bolivianos above the typical five Bolivianos that is paid to fill a 200-liter barrel of water. This amount used for all household activities will last a family between three and five days. Moreover, there is a new unprecedented demand for this water in the north and central parts of the city, which means less water is available for the south. As the water crisis continues, inequities deepen. Only those who can afford rising water rates can receive regular refills—precisely the issue that Cochabambinos fought against during the 2000 Water War.

In April 2000, urban and rural residents of Cochabamba banded together to oust the transnational company that took over the city’s water services, rejecting privatization and the principle that water could serve as a source of private profit. The events shook Bolivia and proved to be a catalyst for a larger political movement as similar anti-neoliberal water protests and resource battles followed in La Paz and the neighboring city of El Alto. Riding on the momentum for change, and appealing to the marginalized factions of the population, Evo Morales and the Movimiento Al Socialismo (Movement Toward Socialism, MAS) party took office in 2006.

Since the water wars, the Bolivian government has implemented several reforms to the water sector, including enshrining water as a fundamental right in the Bolivian Constitution and prohibiting the vital resource’s commercialization. Thus, the aguateros’ unregulated water business—not to mention the country’s growing bottled water industry—Is technically illegal. Yet if you ask an aguatero, they are not selling water, they are simply charging for a service that the municipality is unable to render.

To date, authorities seem to have largely bought that argument, permitting the practice with the argument that stopping the aguateros would ostensibly cut off water to the neediest sectors of Cochabamba. The Autoridad de Agua Potable y Saneamiento Básico de Bolivia (Potable Water and Sanitation Authority), an entity of the Water Ministry formed under MAS, recently proposed to regulate the aguatero prices as part of an emergency plan, thereby acknowledging and temporarily condoning the illegal activity in order to guarantee water. This would provide a band-aid to the city’s fundamental water problem, which is a result not simply of scarcity but rather inept management. 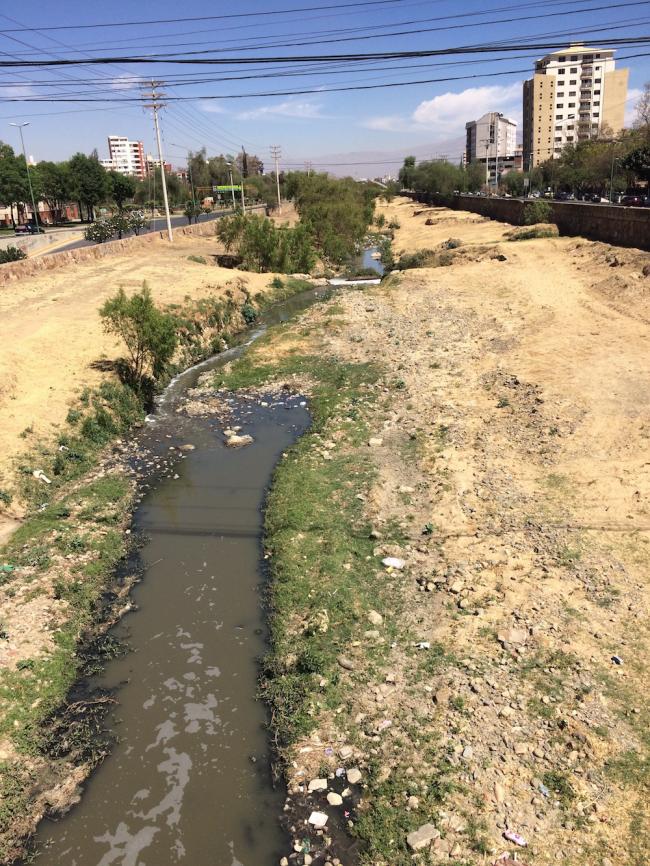 After the Water War, Semapa was re-municipalized and returned to public hands. A key demand that emerged from the protests was the inclusion of public participation and social control of the water utility. Citizen representatives were elected to Semapa’s Board of Directors. Yet this never properly functioned as a corrective balance, and the program was quietly phased out.

Without a robust mechanism for horizontal participation, Semapa reverted to its former role as a so-called “botín politico,” (political spoil), an agency used for political gain. There is a rotating door of general managers that are appointed by the mayor’s office for political reasons instead of competence. Charges of political favoritism, clientelistic construction allotments and corruption within the company abound. Over the years, Semapa’s expansion to the southern zone has stalled and the necessary improvements to the existing infrastructure have not been completed. As it stands, the 40-year old, porous pipes in Cochabamba’s city centre leak over 50% of the water they are supposed to carry and cause contamination. Albarrancho, the water treatment facility designed to serve a population of 200,000 runs over capacity, filtering out contaminated water that is later used for crop irrigation. The improvement of the water utility has remained stalled under the MAS, despite the legal and institutional reforms in the water sector as a whole.

The frustration over ineffective water management has only intensified amidst the country’s current drought. It has also led to renewed grassroots organization. In recent months, militant water activists, known as “water warriors,” have reconstituted the Coordinadora, the coordinating body that organized a broad coalition of protestors during the Water War. Under different leadership, the revived Coordinadora organized a water summit in August 2016 to provide an opportunity for people to voice their concerns over the lack of water and make demands on the government. The sense of desperation during the summit was palpable. The government’s claim that there are simply not enough funds available to improve water accessibility is not acceptable to residents, particularly when spending on other major public works, like a new stadium and asphalting roads, has continued apace.

Amidst the scramble to find solutions, a series of “crisis meetings” hosted by various institutions exposed a mix of indifference and political posturing. Despite the noted absence of government representatives, the divisions along political lines shaded the event. In the 2015 regional elections, José María Leyes of the center-right Movimiento Demócrata Social (Social Democratic Movement, MDS) won the mayoral vote in Cochabamba by 56.7%. This defeat destabilized the MAS locally, but the party maintained their governor’s seat at the departmental level. Discussions of possible solutions to Cochabamba’s water issues inevitably devolved into debates between the blue and green camps, the political colors of MAS and MDS respectively – especially over the proposed Corani project.

First proposed (and rejected) 20 years ago, the $45 million project would channel water from the Corani reservoir to the city, with an estimated one to two year construction period. The civic committee and Semapa, aligned with the mayor’s office, support the Corani project. On the other hand, the Potable Water and Sanitation Authority, associated with MAS, insists that the Misicuni Multiple Megaproject is the answer. The Misicuni project would involve redirecting water from Misicuni and two other reservoirs, by way of a mountain tunnel, and the building of a 120-meter dam. Under construction for the past 50 years, the perpetually postposed project is mired in corruption scandals and technical difficulties. Yet MAS remains committed to Misicuni; Community leaders of the southern zone, the area most affected by the water issues, are also divided upon party lines. Conflicts arise between communities over access to the limited water resources, and party affiliation adds a layer of contention to the debates. During one of the water meetings, a group opposed to the proposal at hand was denied the opportunity to speak because they belonged to the opposing political camp.

Discrediting either side is strategic because providing a successful solution for Cochabamba’s water would mean tremendous political gain. But both the Corani and Misicuni proposals are problematic because they fail to address the inadequate distribution and infrastructure within the city itself. According to Semapa’s general manager, a major water infrastructure project was recently halted because the governor’s office did not put forward their share of the investment.

The conflictive situation and divisiveness is an impediment to resolving the water problem, which necessarily requires a coordinated effort. But once the threat of privatization passed, the organizational capacity that manifested during the water war also subsided. As historian Rafael Puente puts it, Bolivians are tremendous in times of war and disastrous in times of peace. Moving forward, the organizational capacity must be mobilized to address the water crisis in Cochabamba. Common ground must be found to tackle the complex task of constructing a well functioning public alternative that delivers equitable water services and upholds the fundamental right to water for all.

Nasya Sara Razavi is a PhD Candidate in the Department of Geography and Planning at Queen's University. Her doctoral research focuses on participatory water governance in Bolivia.