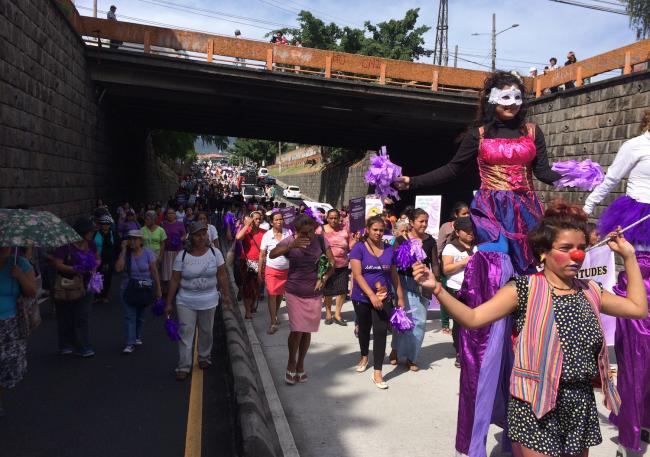 On November 25th, over 500 hundred people marched through the streets of San Salvador to commemorate the International Day for the Elimination of Violence Against Women and to demand an end to all violence against women. Women-only drum crews pounded out a festive rhythm as participants from social movement organizations convened by the country’s feminist movement, including unions and labor groups, the LGBTQ community, healthcare workers, agricultural cooperatives, and environmentalists, all took to the streets.

A principal demand of the marchers was a call for El Salvador’s Legislative Assembly to ease the country’s total ban on abortion. While the feminist struggle for full reproductive rights is nothing new in El Salvador, organizing efforts over the past few years have gained momentum, found new openings, and are pushing forward the fight for women’s health, safety, and bodily autonomy.

Salvadoran feminist organizations and legislators of the governing Farabundo Martí National Liberation Front (FMLN) made history in October when they introduced legislation to legalize abortions in cases of rape, incest, an unviable fetus, and when a woman’s life is at risk. If approved, Salvadoran women could once again seek therapeutic abortions, which were legal prior to 1997 when a right-wing-controlled legislature passed a total ban. The 1997 sanction was followed in 1998 by a Constitutional reform that recognized human life as beginning at conception, creating a legal framework that allowed prosecution of women and abortion providers for murder. The result is that today El Salvador is only one of six countries worldwide with a complete ban on abortion.

According to Sara García from the Agrupación Ciudadana por la Despenalización del Aborto Terapéutico, Ético y Eugenésico (Citizen Group for the Decriminalization of Abortion), the criminalization of abortion has “imposed serious consequences on the health and lives of women and young girls, generating everything from stigmatization to unjust criminalization.”

García noted that criminalization denies women access to life-saving medical care and also “causes judicial insecurity for health and medical personnel who treat cases of high-risk pregnancies.” Indeed, even in the case of an ectopic pregnancy - a life-threatening situation for a woman where the fetus develops outside of the womb with no chance of survival - doctors are unable to offer the recommended medical treatment of terminating the pregnancy.

Another consequence of the abortion ban is the frequency with which women who experienced a miscarriage or still-birth are unjustly convicted of abortion or, in many cases, murder. Valentina Ballesta, a lawyer at the Center for Justice and International Law (CEJIL), explained to the Salvadoran press, “many women who have medical emergencies or births outside of hospitals are accused by their own doctors or by health personnel, and processed for aggravated homicide.” Advocates point out that in these cases, classist and misogynist attitudes often violate a woman’s right to the presumption of innocence, which is protected under the Salvadoran constitution. Virtually all women convicted of abortion or feticide are impoverished, reliant on the public healthcare system, and, in many cases, have limited formal education.

The total abortion ban holds particularly difficult consequences for pregnant girls and young women. According to a report by El Salvador’s Ministry of Health and the United Nations Population Fund, over 13,000 girls became pregnant in 2015, 1,400 of whom were between the ages of 10 and 14. The study also found that these girls are often impregnated through rape and other forms of sexual violence by older men, in many cases a relative or family friend. García says the harshest indication of this reality is that the leading cause of maternal death in girls and teenagers is suicide.

Once pregnant, the report notes that 80% of these girls are no longer able to attend schools, become responsible for domestic duties, and have more children with those who impregnated them. In response to this data, the Minister of Health, Violeta Menjívar made an impassioned plea to the Attorney General to prosecute sexual predators. She lamented, “It’s unfathomable that only [women and girls] are persecuted for interrupting a pregnancy and not the men who impregnated them…if we do not begin to deal with the concept of justice, as much as we may want [to reduce these pregnancies], we will not advance.” 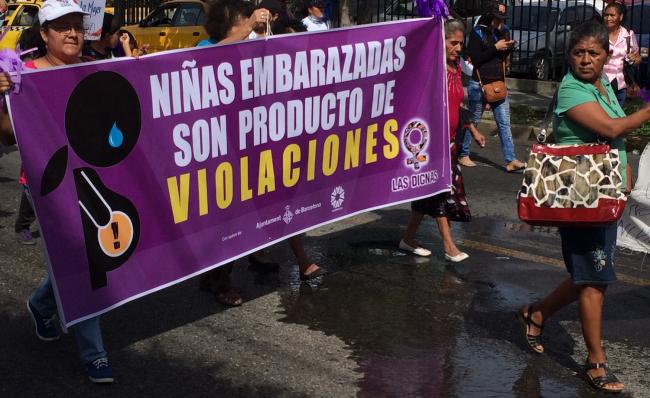 The absence of sexual and reproductive education, high levels of violence against women, and the absolute criminalization of abortion have disproportionately negative impacts on women’s human rights, as women are the ones that have to live with the consequences of wrongful convictions, precarious medical attention, and family separation. Rarely, are these issues part of the public debate on abortion, which has historically been dominated by powerful, conservative sectors whose influence is reflected in public opinion polls that show minimal public support for women’s full reproductive rights. Until recently, even many leftist and progressive politicians considered defending reproductive rights political suicide. Influential feminists within the FMLN such as Norma Guevara and Violeta Menjivar who in 2010 criticized former President Mauricio Funes for his refusal to consider reforming the countries total abortion ban have also continued to push the issue both within the party and from their positions within the government. As a result, current and previous FMLN administrations have made unprecedented gains in addressing the needs of women in the country, but the abortion ban persists.

In recent years, the Salvadoran feminist movement has increased organizing and mobilizing to challenge the country’s draconian abortion law. The international campaign “Liberty for the 17” has fought for pardons for women unjustly imprisoned for abortion or aggravated murder in the aftermath of miscarriages or obstetric emergencies. The campaign has successfully secured the freedom of three women, but even these victories remain precarious as the country’s Attorney General is appealing the exonerations.

Public education campaigns by feminist groups with the support of international NGOs may be playing a role in shifting public opinion. Between 2009 and 2012, it appears that the percentage of Salvadorans who support permitting abortions or who agree that the church should permit abortion in case of rape or malformation has risen considerably. While the Central American University’s (UCA) most recent poll found 57.4% support for permitting abortions when the mother’s life is in danger, 51% when the fetus is unviable, and 22.7% in cases of pregnancies resulting from rape, though it still showed less than 6% of the population backs abortions for girls and teenagers who feel unprepared for motherhood or for adult women unable to support a child. Just three years before, in a 2009 study on religion and abortion, the UCA found that only 15.2% of participants agreed that churches should permit abortion in cases of rape of malformation, while 82.5% of participants disagreed or highly disagreed.

But feminist groups are up against anti-choice messaging propagated through the country’s churches and a well-funded lobby. Julia Regina de Cardenal, the wife of one of El Salvador’s wealthiest businessmen, Luis Cardenal, is the most public face of this lobby. Her foundation “Yes to Life” receives ample space from the local media to spread messages like, “abortionists use any excuse to justify the murder of the unborn,” and convince the public that even a moderate easing of the current ban is just a first step towards full legalization of abortion.

In response to the feminist movement’s growing success, Ricardo Velásquez Parker, a legislator from the right-wing Nationalist Republican Alliance (ARENA) party introduced a bill in July 2016 to increase the penalty for abortion to 50 years in prison (currently the maximum sentence is eight years, though women convicted of murder often serve up to 30 years). This right-wing backlash persuaded the feminist movement to build on mounting support for their cause by pro-actively going after the inhumane ban. They found a natural ally in staunch feminist and FMLN legislator Lorena Peña, who was finalizing her term as president of the Legislative Assembly.

On Tuesday October 11th, Peña introduced legislation drafted in coordination with the Alianza por la Salud y la Vida de las Mujeres (Alliance for the Life and Health of Women) and the Citizens Group for the Decriminalization of Abortion to reform Article 133 of the Penal Code to decriminalize abortion in cases of rape, incest, an unviable fetus, and when the mother’s life is at risk. All 31 FMLN legislators in the Legislative Assembly have committed their support. Right-wing legislators have publicly expressed their opposition and ARENA’s Ricardo Velásquez told the press, “With this FMLN proposal, I think it is clear to the population who is in favor of this global genocide.” 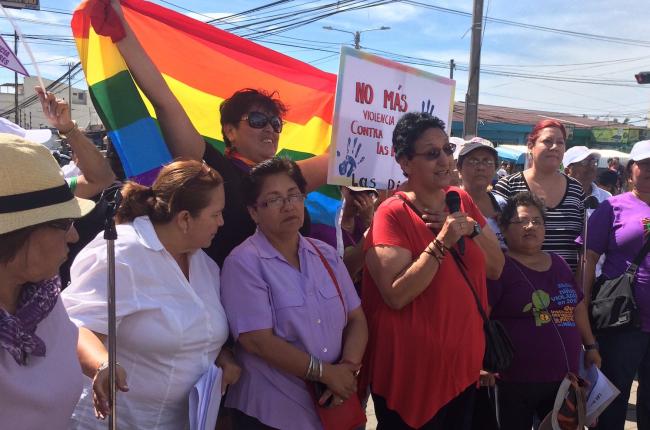 At the November 25th march, Lorena Peña encouraged feminists to continue demanding their reproductive rights and stressed that “under an ARENA government it is impossible, under the FMLN it’s possible.” To get the reform approved, massive pressure is needed to convince twelve legislators to join the 31 FMLN legislators. This will be an uphill battle, as ARENA and the Christian Democrat Party (PDC) have publicly stated that they will vote against. The other two parties with representation, the Grand Alliance for National Unity (GANA) party with eleven seats and the National Conciliation Party (PCN) with six, have yet to express party-wide positions, but neither have a history of championing women’s rights. The recently-named Human Rights Ombudswoman Raquel Caballero de Guevara, who was nominated by conservative ARENA legislators, has come out against the proposed reform and promised that she will “never support abortion.”

Yet Salvadoran feminists remain hopeful. According to García, the Citizen Group and other reproductive rights organizations have “great expectations,” and an objective going forward is to ensure the first ever “serious and scientific debate” in the Legislative Assembly about abortion and the inhumane consequences of its criminalization. “We hope that following the debate that the Legislative Assembly carries out along with the media and civil society, that [the proposed reform will] be approved,” added Sara Garcia.

El Salvador’s total ban on abortion is a form of institutionalized misogyny. It represents State-sponsored reproductive punishment that disproportionately affects poor and working-class women, women with disabilities and chronic illnesses, and those with limited formal education who are already on the receiving end of institutionalized violence. García expressed that approval of the proposed reform would “be an indicator that El Salvador is constructing public policies through democratic processes…it would constitute a concrete action for consolidating a more just and equitable society.” She went on to say that, success “will be the result of years of work by social and feminist organizations, who have fought so that this subject not be silenced and forgotten.”

Samantha Pineda is a researcher on political and social issues currently based in El Salvador. Part of the Salvadoran diaspora, she grew up in Los Angeles and graduated from the University of California-Santa Cruz in Feminist Studies and Latin American and Latino Studies. She is also on the board of directors of the Committee in Solidarity with the People of El Salvador (CISPES).