A Radical Proposal for Radical Times

A growing coalition of worker and immigration activists are demanding that President Obama issue a general pardon for immigration status infractions. 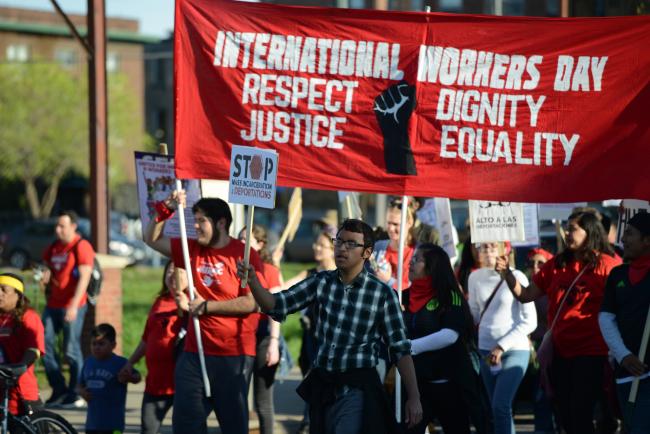 Donald Trump’s election left many immigrant rights activists in a panicked thought loop. What did he actually say he would do? If he was saying he would deport “criminal aliens” and “build a wall,” is that really any different from what we’ve already seen under the Obama administration? Could he really deport 11 million people? Would he really eliminate President Obama’s signature successful pro-immigrant action, the Deferred Action for Childhood Arrivals (DACA) program, which granted temporary legal status to hundreds of thousands of undocumented youth? If he did, what would happen to these young people? Finally, could there be any way to connect the struggle for immigrant rights to a larger campaign committed to challenging Trump’s extreme version of kleptocratic neoliberal capitalism?

In the immediate wake of the election much of the attention with respect to the future of U.S. immigration policy has focused on the uncertain status of Dreamers and DACA recipients. On November 17, Representatives Zoe Lofgren (D-CA), Lucille Roybal-Allard (D-CA) and Luis Gutiérrez (D-IL) composed a letter asking Obama to issue a presidential pardon for DACA recipients before he left office, thus making their immigration offenses irrelevant and possibly enabling them to seek permanent legal status. Although the administration quickly rejected the idea, it has not died. A few weeks later, Sens. Dick Durbin (D-Ill.) and Lindsey Graham (R-S.C.) introduced the Bridge Act, which would enhance and protect DACA.  Meanwhile, at the grassroots, the activism of a growing coalition has made the proposal grow much bolder.

In large part this is due to the work of groups like the Immigrant Worker Center Collaborative of Boston (IWCC). The IWCC has argued that focusing on “Dreamers,” a group of “exceptional” model immigrants, ignores the key structural, economic, and political issues that ultimately help link immigrants’ struggles to those of all working Americans—the so-called 99%. DACA and its legislative cousin, the DREAM Act, grant rights to a relatively small subset of the 11 million undocumented people in the country—those President Obama described as “Americans in their hearts, in their minds, in every single way but one: on paper.” But by positing immigrant youth brought to the country by their parents before the age of 15 as uniquely innocent, deserving, and different from the rest of the undocumented population, these initiatives could be seen as side-stepping the structural and economic nature of the immigration issue, and being complicit in the criminalization, detention, and deportation of the other 10 million immigrants without papers.

Thus, amidst a national flurry of immigrant rights initiatives, the IWCC came up with a proposal that was radical in its simplicity: by emphasizing undocumented immigrants’ position as workers, the IWCC has demanded that Obama pardon all undocumented people in the United States. The organization’s petition reads: “Mr. President, we require you take a bold, creative, and humane political measure to protect families and help consolidate the national economy. We demand that you issue as soon as possible a Decree for General Pardon of Infraction of Immigration Status before the end of your term of office. This should include all undocumented workers who contribute their income and their taxes to this country.”  In short, by placing workers and their rights at the center of the immigration debate, the IWCC petition demands an analysis that transcends feel-good, neoliberal multiculturalism and challenges the roots and nature of inequality. What’s more, the IWCC initiative connects the struggle for immigrant rights to a larger campaign against Trump’s extreme version of neoliberal crony capitalism.

Unlikely as it may seem, the initiative has gained traction. Within a week of its release on December 6, dozens of organizations nationwide signed on to the IWCC’s petition, including immigrant rights organizations, worker centers, progressive churches, and academic labor centers. A companion petition by academics supporting the initiative quickly garnered hundreds of signatures—and is still growing.

Such demands are expanding the debate about the how best to stand in solidarity with immigrant communities. While many college and university administrators rallied to support DACA in the face of Trump’s threats, they have been reticent to go further in their demands. Within weeks of the election, hundreds of college and university presidents had signed a statement by Pomona College demanding that DACA be “upheld, continued, and expanded.” The “expanded” was perhaps a nod to President Obama’s attempt to expand the program with Deferred Action for Parents of Americans (DAPA), which aimed to extend DACA-like protections to undocumented parents of children who are citizens by virtue of being born in the U.S. (DAPA was struck down by the courts in 2016.)

But these administrators were also trying to preempt demands at Pomona and other colleges and universities to take a more proactive stand by designating themselves as “Sanctuary Campuses.” Many of these petitions insisted, for example, that their institutions commit to protecting faculty and staff, or even broader definitions of the college or university “community.” As one petition at my university, Salem State University, read, the notion of the university community should encompass “students’ families and home communities…those who work directly for our universities,” as well as “many others such as those who grow the food that we eat in our dining halls, pack the books that we receive in our bookstores, and make the clothes that we sell with our logos.”

But campus officials who willingly spoke in favor of DACA have thus far been reluctant to accept the language of “sanctuary,” and have hesitated to agree to some of the specific measures students and faculty are demanding—most especially, the notion that their “community” should go beyond just their students.

Like some campuses, numerous cities nationwide including Chicago, Los Angeles, New York, and many others large and small either reaffirmed their sanctuary status or newly declared it. Their sanctuary provisions apply to all in the city. Even before the election, Donald Trump had vowed to “block funding for sanctuary cities.” The concept of “sanctuary” has no precise legal meaning: a city can adopt the name for purely symbolic reasons, or it can implement policies limiting local enforcement of ICE activities in different ways. But equally vague is Trump’s threat to “block funding.” As Ilya Somin points out in the Washington Post, it would face numerous practical and constitutional complexities. Still, some cities, as well as some colleges and universities, have used Trump’s threat, and also the vagueness of the term “sanctuary,” to justify their reluctance to adopt the status.

It’s in this context that the IWCC proposal for a general pardon represents such a powerful demand. Like calls for undocumented “sanctuary,” the IWCC proposal transcends the debates about which immigrants to help. The initiative’s call boldly demands equal rights for all, irrespective of immigration status. Although the Obama administration has already rejected out of hand the parallel Congressional letter that focused on protecting DACA recipients, the radical nature of the times has led a surprising number of individuals and organizations to respond enthusiastically to a proposal that was practically impossible to even articulate only a few weeks ago.

By putting the idea of a General Pardon of Infraction of Immigration Status front and center, the IWCC and its allies are pushing all of us working on immigrant and worker rights to broaden and deepen our objectives for economic and social justice in the era of Trump. Even more importantly perhaps, the IWCC petition is also helping to forge a new coalition of organizations working on similar issues but too often in isolation from one another. While commentators and organizations debate how identity-based demands relate to class-based critiques of capitalism, this campaign offers one way to link the two. So far, the overwhelming organizational and popular response to these efforts shows the extent to which this opportunity to enlarge our political horizons and deepen our alliances resonates in the uncertain political climate the 2016 presidential election has left us in.

Aviva Chomsky is Professor of History and Coordinator of Latin American Studies at Salem State University in Massachusetts.  Her books include They Take Our Jobs!  And 20 Other Myths about Immigration and Undocumented: How Immigration Became Illegal.