A Year Without Berta

A year after the assassination of renowned activist Berta Cáceres, Gustavo Castro reflects on the impunity that continues in the investigation of her murder. 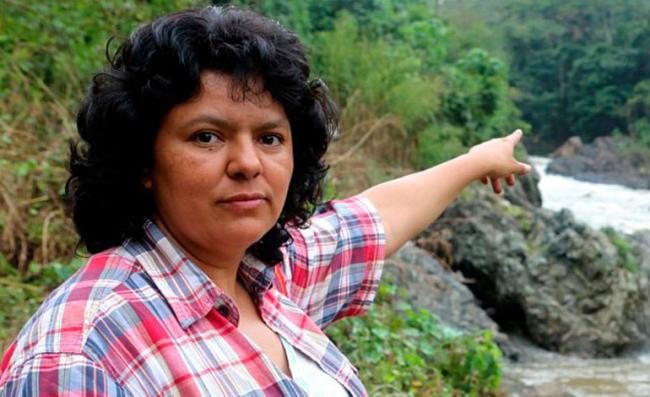 March 2 marks the first anniversary of the assassination of Berta Cáceres, the world-renowned Honduran environmental and indigenous rights activist. Gustavo Castro Soto was the only witness to the murder, and in the days following was subjected to mistreatment by the Honduran authorities and threats against his life. Last year, Gustavo shared this experience with NACLA.

Gustavo also highlights the role of financial institutions in perpetuating continued violence and land grabbing in Honduras, and calls out the U.S. for contributing to a culture of impunity in Honduras, a point underscored by additional evidence uncovered by The Guardian this week that two of the men charged in the assassination received U.S. military training. Concerns about the U.S. role in Honduras led Members of Congress last year to introduce the Berta Cáceres Human Rights in Honduras Act, a bill that would suspend security assistance funding to Honduras until serious progress is made to address human rights violations by police and military forces. The bill is expected to be reintroduced today.

Despite the ongoing impunity and continued killing of indigenous and environmental rights defenders in Honduras, Gustavo has not given up hope. In fact, he finds renewed hope in collective resistance, even in these very dark times. 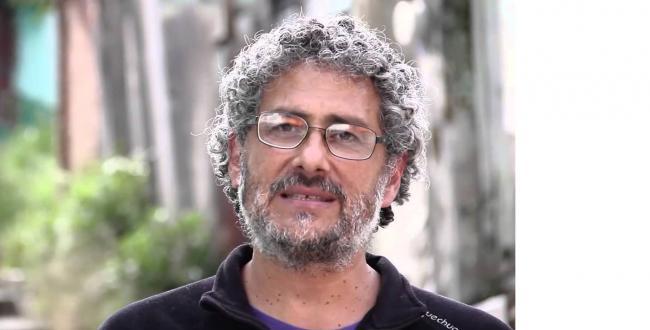 Moira Birss: March 2 is the first anniversary of the assassination of Berta Cáceres, to which you were the only witness and in which you were injured. How has the last year been for you?

Gustavo Castro: It has been filled with much uncertainty at seeing the slowness with which the Honduran government is carrying out the investigation. The Honduran government has done a lot in the investigation, but it has all been very superficial and lacking transparency. In fact, the investigation has been kept officially under wraps so far. And there have been so many irregularities. For example, last year the case files in both mine and Berta’s cases were stolen, but I believe those to have been “self-robberies” [to impede progress in the cases].

None of this lends credibility nor inspires confidence in the investigation. Yet the government refuses to create an independent commission to investigate it.

This year, year eight men have been charged in the case. The latest arrest was of the men they say shot me. This year is an election year in Honduras, and I’m sure the government will want to show positive results in this case to help its chances at the polls.

GC: It has been difficult. The case has put me in a lot of danger, and that continues to be true, as evidenced by the fact that ten months after, this January, the seventh suspect in the case was captured in Mexico, by the Mexican government. This is yet another piece of evidence of what we’ve been saying this whole time: that those behind Berta’s assassination are members of the [Honduran] army, employees of the [dam] company, hired hitmen, and that they have a long reach. And so that’s why it’s so concerning that the investigation is advancing so slowly, because we don’t know if all those responsible have been captured or if there are more still on the loose in El Salvador, Guatemala, Mexico, or wherever they might be. And so this has been very difficult and led to a lot of uncertainty about my safety.

MB: What do you think about the fact that the U.S. State Department certified in November last year that the Honduran government had sufficiently improved its human rights record in order to allow the full disbursement of aid to the country’s security forces?

GC: Obviously it is absurd! It’s a lack of common sense.

When reports – like the recent one from Global Witness – and the daily lives of Hondurans tell of the systematic violation of human rights in the country, and of so many killings, it’s clear evidence of what is happening there. All this evidence is also why the Organization of American States has sent the Mission to Support the Fight against Corruption and Impunity in Honduras, because there’s a clear recognition of the terrible, shocking impunity in the country.

But clearly the U.S. has so many interests in the country that it is willing to turn a blind eye to the impunity – to actively support impunity – and make decisions as absurd as this one. In doing so the U.S. is a participant in the corruption and impunity, but it does so because of its interests: it has a military base in Honduras, to which it sends many military resources. And so of course it isn’t going to sacrifice those interests.

All of this just makes me laugh! How is it that they’re capable of making such an absurd decision? I guess everyone sees the reality except the U.S. government.

MB: How have you seen the Honduran government reacting to the U.S.’s decision?

GC: I think at the end of the day a factor contributing to the impunity in Honduras and the maintenance of the same set of interests in the government is the support of the U.S. And the clear proof of that is that so many atrocities continue to occur, without any instrument – neither internal nor external – to stop them.

If what is happening in Honduras was happening in another country that isn’t directly responding to the interests of the U.S., an international mission would have been sent long ago to “establish order” and “restore democracy.” And it can’t be denied that U.S. interests are an important part of what orients Honduran national policy.

MB: As documented in Global Witness’ recent report, since the assassination of Berta, violence has only increased against indigenous and Afro-descendent communities and all kinds of human rights and environmental defenders. In fact, the latest assassination occurred just last week. The report also documents the direct role of high-level government officials in this violence. Do these findings reflect what you know about what’s occurring in Honduras?

GC: Yes, definitely. And this is a pattern that, in different forms, levels, and intensities, repeats throughout Latin America. In Honduras, indigenous and campesino communities are resisting being displaced by the huge number of hydroelectric projects, mining concessions, palm oil plantations – the Facussé family is the principal owner of most of the country – or the model cities that they’re trying to build. At the end of the day there are many interests that are on occupied territories belonging to indigenous and campesino communities.

The prevailing logic in Honduras is displacement and land grabbing. And the more the people resist, the more this logic is imposed via violence. And it’s important to say, too, that this logic attracts other interests, and other types of hidden violence. Because behind all these mega-projects are others that benefit from these projects: financiers, service companies, infrastructure companies, and yet others that like vultures are waiting for the call.

A key actor here are the banks: The World Bank, the Inter-American Development Bank – both of which are multilateral institutions and therefore controlled by governments – and above all the Banco Centroaméricano de Integración Económica (Central American Bank for Economic Integration), which doesn’t have human rights policies. These are banks that hand out money left and right to companies and the human rights violations that are occurring don’t bother them at all, that people are being massacred with impunity, or that these companies are investing money illegally. And the governments that are members of these banks are responsible for this.

MB: Do you think, then, that targeting the financial backers of these projects is the way to end this kind of violence?

GC: It is one of the ways. If the financiers really complied with human rights and environmental commitments, it would be a different world. But for them, at the end of the day, “business is business.”

In the case of Agua Zarca [the dam whose construction Berta was fighting against], the Dutch fund and the Finnish fund didn’t withdraw because of internal policies, but because of public pressure. They knew way beforehand that there were killings, but they only decided to withdraw after the public scandal erupted.

I think it’s also an obligation of the financiers to implement human rights policies. And that’s also one of the reasons why so many are demanding a binding treaty, so that companies can be held accountable for violating human rights violations.

MB: In our first interview after Berta’s assassination, you said, “In crisis we find hope”. A year later, with the situation in Honduras getting worse, you still living in exile, and authoritarianism threatening to envelop the U.S. and other countries, do you still believe that there is hope to be found?

GC: Yes, because at the end of the day resistance is an ethical struggle. It is a struggle we have to take up. Resistance is a principle of justice, especially when we see that the people are suffering.

It may seem contradictory, but I think that the more repression there is, and, regrettably, the more deaths there are, the more persecution there is, the more criminalization there is, it actually means that more people are resisting, more people are fighting back. Without this resistance, if people just resigned themselves to all this land grabbing, there wouldn’t need to be so much violence nor so much militarization. So much violence and militarization is “necessary” because society is responding, is organizing, is realizing what’s going on and saying “enough is enough.” And this creates hope, because it’s not a continent full of sleepwalkers, but rather of people mobilizing and seeking alternatives.

I think that this creates a lot of hope – people are alive, are hopeful, and seeking alternatives to this destructive capitalism in which we’re living.

COPINH is an example of this. Starting on March 2 – the anniversary of Berta’s assassination – they are launching an international month of mobilization called “Berta Vive, COPINH sigue.” In this we can see that resistance continues.

This interview was translated from the original Spanish by Moira Birss.

Moira Birss is a Latin Americanist, human rights and racial justice activist, manages communications for Amazon Watch, serves on the board of Other Worlds, and organizes with the D.C. chapter of Showing Up For Racial Justice.

Gustavo Castro Soto is a Mexican writer and organizer for environmental and economic justice who serves as the coordinator of the group Otros Mundos/Friends of the Earth Mexico. He has cofounded — and sits on the governing bodies of — many anti-mining and anti-dam networks, as well as the U.S.-based organization Other Worlds.