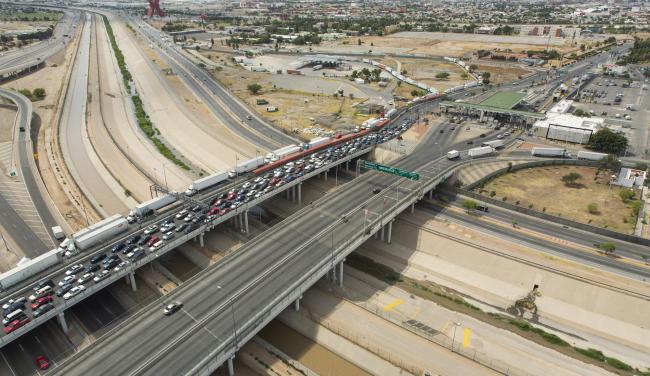 This article was originally published as the Feature Essay in our Spring issue, "#BlackLivesMatter Across the Hemisphere."

Richard Nixon was the first U.S. president who made a promise to close the U.S-Mexican border to illegal drugs and unwanted people part of an election-winning strategy. Speaking on the campaign trail from Anaheim, California, in 1968, Candidate Nixon promised to deal with the “marijuana problem” protested by parents of California’s youth by intercepting Mexican drugs at the border. Then, on September 21, 1969, just eight months after his inauguration, President Nixon’s Treasury and Justice Departments launched Operation Intercept along the almost 2,000 miles of southern border in a supposed attempt to enforce federal narcotics laws.

Spending $30 million USD, Intercept staffed the border with thousands of federal law enforcement agents who were charged with executing intense, time-consuming customs inspections. Nixon’s bottlenecks at the international bridges disrupted life and business on both sides of the U.S.-Mexico border. They also provoked resistance. The Mexican Chamber of Commerce led a brief U.S.-travel boycott on behalf of merchants who had lost trade in Mexican border communities, including Ciudad Juárez. Then Mexican president Gustavo Díaz Ordaz said Intercept “raised a wall of suspicion” between the two countries. Indeed, for almost three weeks, Intercept created a “wall effect” as the U.S. government turned a fluid border into an obstacle course.

Although the U.S. government officially ceased the operation of the program in October 1969, Intercept’s principles have guided border policy for every president since Nixon. In the late 1970s, Kent State University political scientist R. B. Craig called Intercept “a benchmark in United States-Mexico narcotics policy.” In 1999, U.S. Congressman Silvestre Reyes (D-El Paso) remembered Intercept because it “initiated new approaches to a problem of national magnitude.” Reyes would know. Prior to Congress, he was the El Paso sector Border Patrol chief, and in 1993, he designed and executed Operation Blockade/Hold-the-Line, placing agents at roughly 50-yard intervals along the urban border between El Paso and Juárez to stop smuggling and unauthorized immigration. Reyes immediately followed Hold-the-Line with an attempt to build a fence on the western outskirts of Juárez/El Paso. Similarly, law-and-order politicians, like former Maricopa County, Arizona sheriff Joe Arpaio, fondly remember Intercept. As the New Yorker’s William Finnegan reported in 2009, Arpaio, who worked on Intercept with erstwhile Nixon operative G. Gordon Liddy, said the operation “nearly closed the border with Mexico.” The no-exceptions customs inspections became permanent after September 11, 2001.

Today, Donald Trump’s threatened U.S.-Mexico border wall—like Nixon he wants to keep unwanted elements from Mexico out of the U.S.—comes straight from Nixon’s playbook. As Grace Slick of the rock band Jefferson Airplane sang in 1970 in response to the dearth of marijuana in the U.S. for the months after Intercept, “Mexico is under the thumb of a man we call Richard.” As with Nixon, so too with Trump. And now, perhaps more than ever, Mexico must beware of the United States’ longstanding inclination for unilateral action on the two nations’ shared border. After all, Trump won’t so much build the wall as complete it: at present, a fence 18 feet tall lines 650 miles of the southern border.

Juárez/El Paso—which rivals Tijuana/San Diego as a significant border metropolis—is an excellent place to narrate and analyze how strict federal border controls have created this “wall effect.” Unlike their Californian cognates that are separated by 20 miles of highway and suburban sprawl, Juárez/El Paso are immediate to each other—or at least they were, before Intercept. Juárez/El Paso residents keenly felt Intercept’s tightened regulations. Customs inspections slewed northbound traffic to less than a standstill on heavily transited, previously swift international bridges. National news media projected images from both Juárez/El Paso and Tijuana/ San Ysidro of long lines of cars and pedestrians. The “border bottleneck” was born. It’s fair to say the United States still lives within Richard Nixon’s border, and that Donald Trump now wants that border cast in concrete.