El Salvador has become the first country in the world to categorically prohibit metal mining, after over a decade of struggle against it. 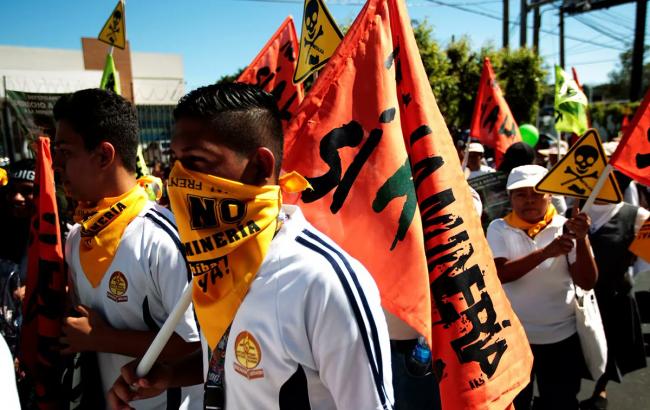 On March 29, 2017, El Salvador became the first country in the world to categorically prohibit metal mining. This move is historic and auspicious. Champions of environmental justice and community self-determination are celebrating El Salvador’s radical decision, the product of eleven years of stops and starts and deal-making in the Legislative Assembly. While other countries have taken steps in this direction, until now, no country has built an unconditional ban of metal mining directly into its legislative framework.

Mining activity boomed across Latin America and beyond between 2002 and 2012, stirring up a great deal of social unrest. Intense conflicts around mine sites in the region between 2000 and 2015 led to, by one count, 44 deaths and 403 injuries. Meanwhile, anti-mining networks in El Salvador have made the country’s water crisis and mining’s potential threats to water a centerpiece of their discourse. This rhetoric succeeded in uniting and galvanizing diverse segments of Salvadoran society—rural and urban, rich and poor, progressive and conservative—in fact, polls indicate that nearly 80% of Salvadorans oppose mining.

Mining in El Salvador has a contested history. While the country competed with neighboring Central American republics in the 1990s and early 2000s to attract foreign direct investment through mining, expensive lawsuits, negative associations with mining, and its impact on clean water supply has turned public opinion and legislation against it.

In the late 1990s, countries across Central America began competing to secure foreign direct investment (FDI) in mining to make up for anticipated losses in textiles as the Multi-Fiber Arrangement—a set of global quotas that governed textile exports—was set to expire. In anticipation, El Salvador established a 3% royalty rate for mineral production in 1995. Guatemala responded by reducing its royalty rate from 6% to 1% in 1997. El Salvador, then, revisited its Mining Law in 2001, reducing the royalty rate to 2%.

On the heels of this legislation, in 2002, Pacific Rim Mining Corporation, a small Vancouver-based exploration company acquired the rights to the El Dorado gold and silver deposit in San Isidro, Cabañas. They moved ahead enthusiastically in exploring the high grade, low sulfide underground deposit with the full support of the Francisco Flores (1999-2004) administration. Over the next several years, multinational metal mining in El Salvador gained momentum as Pacific Rim explored and developed its property. El Dorado was poised to open with proven reserves of 1.65 million ounces of gold. The San Sebastián Mine in the La Unión Department was about to reopen after a thirty-year hiatus as well, and other junior companies were actively exploring.

Viewed in narrow economic terms, mining can offer gains in some circumstances, but El Salvador’s geographic, demographic, and hydrological set up is not suited to large scale mining. The mining industry is notoriously corrupt and socially and environmentally irresponsible. Mineral exploration is a gamble. The odds are against finding and permitting proven reserves. So most mining companies depend on venture capital, which creates a high risk high reward mentality that leaves little room for social and environmental responsibility.

In late 2006, President Antonio Saca (2004-2009) suddenly called a moratorium on active mining projects in El Salvador. In the words of one industry insider, “Everything just stopped…In December of 2006 [then president] Saca called the Minister of the Environment and the Minister of Economy and told them both not to do anything about mining until they heard from him. And they never heard from him again.” Prior to these events, industry insiders described the permitting process as “simple” and “smooth as silk.” This sudden, informal moratorium had the effect of indefinitely preventing the Ministry of the Environment from issuing Pacific Rim’s production license for El Dorado. Two years later, in early 2009, in the run up to the March 2009 presidential elections, President Saca and legislators from his ARENA (Nationalist Republican Alliance) party, publicly stated their opposition to mining and support for a mining ban.

Not only were the Pacific Rim and subsequent Oceana Gold dispute arbitration against El Salvador costly and humiliating for the country, but the legacy of the San Sebastián Gold Mine, located in the far east La Unión Department of El Salvador, is also present in the Salvadoran collective memory. Gold mining in San Sebastián dates to 1904, and production took place with no efforts to mitigate acid rock drainage or heavy metal effluents, which have significantly contaminated surface water. In a country that suffers from water shortages, this history cannot be discounted.

El Salvador’s population density means greater competition for water resources, heightening the perception of water insecurity. Contamination from agriculture and manufacturing exacerbates these shortages, with El Salvador suffering from high rates of deforestation and severe surface water contamination from agriculture and manufacturing. The Lempa River is the source of water for over half of the country, and half of the country is located in the Lempa River watershed. The gold vein that has sponsored so much controversy is richest in the upper and middle basin of the Lempa watershed, which means that any river contamination would affect water supplies to much of the country, including the capital city, San Salvador. This has galvanized a great deal of action and political will against mining in the country.

In addition, a series of grisly murders of environmental activists and mine opponents between 2009 and 2011 in and around San Isidro, Cabañas also served as an emblem of how mining can interrupt community life and engender violence. In June 2009, local environmental activist Marcelo Rivera was found murdered. In December of that same year two more local environmentalists, active with the Comité Ambiental de Cabañas (Cabañas Environmental Committee) Ramiro Rivera and Dora Alicia Sorto, were murdered within days of each other. Sorto was eight months pregnant at the time of her death. A year and a half later, Juan Francisco Durán, a third volunteer of the Comité Ambiental de Cabañas was killed. This tragic violence was commonly understood to be linked to the victims’ opposition to mining, although this could never be verified. However, these deaths further contributed to a general sense across Salvadoran civil society that the costs of mining outweighed the gains.

Finally, the fact that no university in El Salvador has a geology department or major means that there were no domestic geologists to work with mining companies or benefit from mining activity and few national experts who could consult with mining companies on environmental issues. Therefore, the mining industry had few natural allies or advocates.

The mining ban initially came from an FMLN-proposed effort in 2006. That same year, a right-wing bill to strengthen environmental oversight of mining and increase royalty rates and social spending, written along with representatives of the mining industry, failed to go to a vote. Its critics believed it did not go far enough. But the FMLN bill sought to prohibit metal mining entirely. The bill was authored by the Mesa Nacional Frente a la Minería Metálica (National Roundtable against Metal Mining, or the Mesa), a coalition of campesino organizations, research institutes and universities, non-governmental organizations, and the Catholic Church along with an International Allies network that includes more than twenty organizations across North America. The Mesa has kept up tireless and constant pressure since 2005 and has generated such broad support across El Salvador such that even the most conservative segments of Salvadoran society have conceded that mining is not in their interests.  As one politically conservative legislator commented to me, “We can’t act against what the communities want. If we do we are imposing a decision that goes against the interests of the population, and that would be political suicide…and we’re not politically suicidal.”

In May of 2006 the bill arrived in the Economic Commission for discussion but the Commission failed to move it forward. Other internal machinations stymied the bill’s progress for many years. The PCN organized an ad hoc legislative commission to take up the bill with the goal of killing it. FMLN legislators sought to move the bill to the Health and Environment Commission. In the ensuing years, the bill in various forms was resurrected several times, but many legislators thought it prudent to resolve the ISCID arbitration before taking up the mining ban again. A new bill, developed by the Universidad Centroamericana (Central American University) was introduced into the Legislative Assembly on February 6, 2017. This new bill went to a vote in March 2017 – and it won.

El Salvador has made a powerful move—both materially and symbolically—in banning mining. The Legislative Assembly has signaled to foreign investors a long-term commitment to resource conservation rather than the short term gains of resource exploitation and has signaled to its constituents that it hears them and is willing to act on their behalf.

While El Salvador and its allies are rightly celebrating this victory, there are challenges left to confront. For one, Oceana Gold, which inherited the ISCID arbitration when it acquired Pacific Rim in 2013, owes El Salvador $8 million in legal fees, and El Salvador must not let its legislative accomplishment diffuse its pressure on Oceana Gold to comply. Second, this move sends mixed signals to potential investors. On the one hand, it places the Salvadoran government in a place of strength in negotiations and it discourages rent-seeking investors, but on the other hand, it’s a strong deterrent to investors in other primary commodity industries. Third, the Mesa has made advocating for a law that bans metal mining its rallying cry. Now that its central objective has been achieved, the Mesa needs to strategize ways to maintain its powerful organizational infrastructure. It needs to adopt a distinct set of goals without letting the momentum from this victory dissipate.

In 2009, a conservative legislator who was working to oppose the mining ban bill, acknowledged to me in a moment of candor, “One can’t live without clean water…and here on this little parcel of land, our scarcest resource is space,” he said. "I do think we will be the first country in the world that prohibits metal mining.” Although it took nine additional years to accomplish, this comment proved prescient. El Salvador has made history with its mining ban.

Michael L. Dougherty is Associate Professor of Sociology at Illinois State University, USA. His work focuses on the industrial and political ecologies of global mining industries and environmental conflicts. He is the co-editor of the book, Mining in Latin America: Critical Approaches to the New Extraction (Routledge 2016).