The Crumbling of a Coup Government

Leaked tapes revealing massive corruption and bribery by Brazil’s coup president, Michel Temer, and party leader Aécio Neves have sent the country’s right-wing coalition into a tailspin. Could it be an opening for the Left? 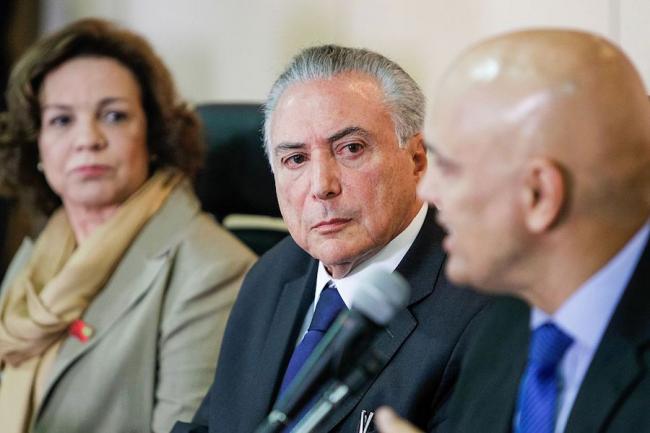 On May 17, audio and video recordings leaked by Joesley Batista, a director of JBS, the world’s largest Meat Packing corporation sent shockwaves through Brazil’s conservative governing coalition, led by the PMDB (Brazilian Democratic Movement Party) and PSDB (Brazilian Social Democratic Party). The tapes revealed Temer and Neves’ direct involvement in paying bribes to silence corruption charges against themselves, destroying what little credibility was left for its party leaders, Aécio Neves and current President Michel Temer, and exacerbated existing conflicts within the Brazilian right. Both Temer and Eduardo Cunha, the former President of the Chamber of Deputies, currently in jail for 15 years for corruption, played central roles in the impeachment process against Dilma Rousseff last year. The two have been proven to be, in the words of Glenn Greenwald, no less than “hardened criminals.”

As much of the Anglophone media has spun the revelations as “more of the same” in one of the “world's most corrupt nations,” it is important to note that leaders of the coalition that threw Dilma Rousseff out of office were proven to have received millions of dollars in bribes, while Rousseff herself hasn't been connected to any kind of personal enrichment. In fact, the technically illegal “fiscal peddling” charges that were used as a pretext for her removal were subsequently proven to be false.

When Michel Temer assumed the presidency last year, his administration immediately began to dismantle the social democratic welfare state that had moved 29 million people above the poverty line during 13 years of governance under the center-left Partido Trabalhador (PT). Temer, who served as Director of the São Paulo State Public Prosecutor's Office during Brazil’s military dictatorship, slashed social spending while dramatically raising the salaries of the judiciary and absolving some of the nation's largest corporations for billions of dollars of unpaid taxes. As these reforms took place, a series of leaked audiotapes proved that, before the impeachment, top PMDB party leaders had worked behind the scenes to attempt to bury the Operation Lava Jato (Car Wash) investigation.

Shortly after entering office, Temer also admitted in a speech to the neoliberal think tank and corporate front the Americas Society/ Council on the Americas (AS/COA) in New York that conservatives had agitated to find a way to oust Rousseff after she failed to adopt PMDB Party policy recommendations released in their Bridge to the Future policy paper, a Washington Consensus-style laundry list of extreme austerity reforms— which appears to have been originally drafted in English.

Despite having $362 billion USD in foreign reserves and $259 billion dollars invested in U.S. treasury bonds, the Temer government claimed it had run out of money. It moved quickly to privatize its pre-salt offshore petroleum reserves, oil and gas production and supply chains, airports, previously protected land in the Amazon region, and the massive freshwater source, the Guarani Aquifer.

The government also moved to remove the PT government's policy that retirement pension payment had to be equal to or greater than the minimum salary, and canceled the PT government policy of annual minimum wage increases exceeding the inflation rate. Brazil’s Congress passed a constitutional amendment to freeze health and education spending for the next 20 years.

Shortly after Temer's approval rating dropped to a historic low of 4% in late April of this year, the JBS Corporation audio and video leaked. In the audio recording, Temer endorses monthly bribe payments to Eduardo Cunha in exchange for his silence about Temer’s involvement in Operation Car Wash. The leaks led Supreme Court Justice Luiz Edson Fachin to authorize the Federal Police to call Temer in for questioning. Although Temer weathered an initial call for resignation after the revelations, there are growing signs that he may not complete his term, which is set to conclude in 2018. According to journalist and ex-PMDB party insider Fernando Moraes, Temer held a recent meeting with leaders from the PSDB and PMDB party—with phone participation from ex-president Fernando Henrique Cardoso— in which they discussed possibilities for his resignation in anticipation of being thrown out of office by the Supreme Court, where Temer will testify on charges related to the JBS scandal.

Temer may avoid jail time, but things are looking more complicated for the national director of the PSDB party and 2014 presidential candidate Aécio Neves. Neves, the heir of a traditional political family, comes with a 30-year track record of corruption charges that have been swept under the table by a sympathetic media and judiciary. Highlights include using public funding as governor of Minas Gerais to build a private airport on his uncle's plantation, and criminally rerouting R$9.5 billion (about USD $6 billion at the time) from the Minas Gerais public health system. Not to mention that in 2013 a helicopter registered in the name of Neves' largest campaign financier, was apprehended by the federal police on his main campaign financiers’ ranch with 443kg of cocaine in it.

Nevertheless, during Brazil’s 2014 presidential campaign, the Anglophone media built him up as a fiscally responsible alternative to the “corruption mired” Dilma Rousseff. During the same pre-election week in which the New York Times repeated subsequently disproved hearsay about Dilma Rousseff taken from the ultra-conservative Veja Magazine, it turned a blind eye to Neves' corruption charges and fluffed him up as a pro-business hero saying,  “his telegenic good looks, marriage to a glamorous former model and the birth of adorable twins last month haven’t hurt his appeal.”

The leaked JBS audio tapes involve Neves asking for a R$2 million bribe from JBS to help cover his defense expenses from Operation Car Wash, and video footage shows one of his cronies receiving the money in suitcases. Furthermore, in the leaked tapes, he suggests killing a witness in Operation Car Wash to prevent him from testifying. The day after the tapes leaked, Neves was kicked out of the Senate and the PSDB party presidency and Neves’ sister and strategy coordinator, Andrea Neves, was arrested.

These recent events have spiraled the conservative coalition that has been running the country since last year's soft coup into a tailspin. The once-united front against Rousseff is showing signs of a total breakdown. For example, Globo TV network, which actively supported the coup in 2016 by interrupting its regularly scheduled programing to urge the public to join pro-impeachment protests, was the first to broadcast the leaks incriminating politicians it formerly supported. But as Globo began its push for Temer's resignation, conservative stalwarts such as ex-President Fernando Henrique Cardoso and São Paulo mayor João Doria stated that the PDSB should remain in power. As Temer refused to resign, 17 Brazilian political parties, including the PMDB and PSDB, signed a motion to annul the JBS bribery investigation and dismiss all of the evidence. The PT party refused to sign.

As a newly revitalized, organized left rallies with strikes and street protests, the illegitimate governing coalition is showing growing signs of fragility. A panicked Congressional president Rodrigo Maia, next in line for the presidency should Temer fall, called in federal troops to crush a peaceful union and social moment demonstration in Brasilia on May 24 . During the pandemonium that broke out, after, Maia lost control over Congress and turned the podium over to his vice president.

Meanwhile, as Temer fails to push through all of the promised austerity reforms, international business interests are growing impatient. Sectors of Brazil’s elites, mainly in the construction and food processing industries, are dissatisfied with Temer's cuts to the Brazilian national development bank (BNDES). Meanwhile, critics ask why the Temer government refuses to treat Petrobras as too big to fail, like the U.S. did with its bank bailout and Germany did with Volkswagen and Seimans.

As fissures within the governing coalition grow deeper, the national director of Brazil’s Landless Worker’s Movement (MST), João Pedro Stedile says that U.S. President Trump’s unexpected win over Hillary Clinton has thrown a wrench into the equation. The Temer administration, according to Stedile, cannot rely on the U.S. government backing it may have enjoyed under Clinton. While it is difficult to prove this claim, there is persuasive evidence of a connection between the Democratic Party and key coup actors. In addition to the U.S. Justice Department’s work with Sergio Moro, the former prosecutor of Operation Carwash, since 2009 and routine NSA surveillance of Dilma Rousseff, PSDB power broker Aloysio Nunes flew to Washington to meet with Democratic party officials and lobbyists close to Hilary Clinton the day after the coup. Temer’s assertion that his party sought to oust Rousseff for not implementing the Bridge to the Future austerity program, which would align with U.S. economic interests, raises additional questions about a link between the U.S. and the soft coup.

On the ground in Brazil, some voices in the Brazilian media are clamoring to cancel next year's presidential elections in favor of an indirect process which would turn the power of choosing the next president over to Congress, nearly one-third of which is currently implicated in Operation Car Wash. They argue that austerity reforms are too important for the nation to risk not pushing them through – that austerity is more important than democracy. The organized Left has another opinion on this subject, though, and will take to the streets on June 30 for a two-day national strike.

Brian Mier is an editor at Brasil Wire and a freelance writer and producer.