What does the controversy about Oscar López Rivera’s participation in this year’s Puerto Rican Day parade tell us about Puerto Rico’s anti-colonial struggle? 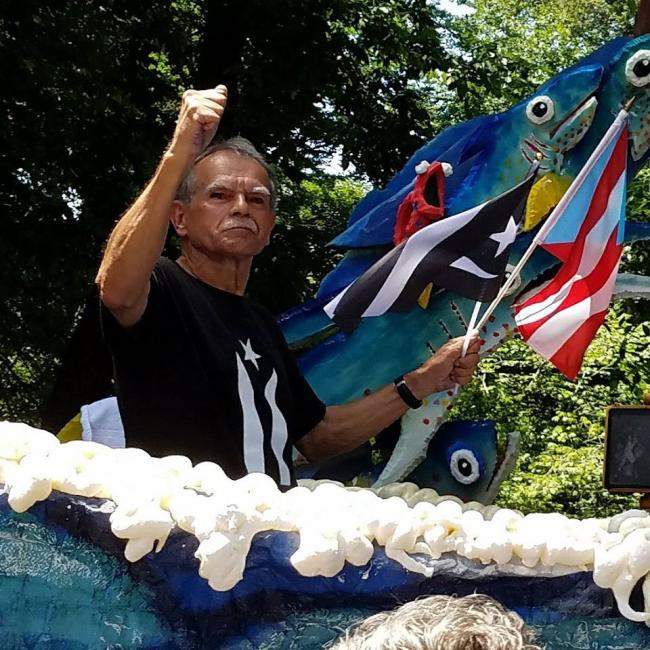 On Sunday, June 11, I witnessed Oscar López Rivera, the 74-year old Puerto Rican revolutionary, ride up Fifth Avenue in New York City on a float surrounded by hundreds of loving supporters. The occasional “boos” from a few scattered bystanders were not nearly enough to drown out the chants and songs in support of López Rivera and the spirit of Puerto Rican resistance to U.S. imperialism that he represents. Several local leaders, including Bronx Borough President Ruben Diaz, Jr. and Mayor Bill de Blasio, have referred to the controversy surrounding Rivera’s involvement in the parade as a distraction from the “more important issues facing Puerto Rico.” In fact, the conflict over this year’s parade is an important reflection of Puerto Rican struggles for self-determination and against colonial discourses that aim to shape Puerto Rico’s reality and destiny.

Leading up to the 60th anniversary of the National Puerto Rican Day Parade (NPRDP) in New York City this past weekend, a wave of negative press emerged around the parade board’s decision to bestow a special “National Freedom Award” to former political prisoner and pro-independence activist, Oscar López Rivera, who was imprisoned for 35 years on federal charges, including seditious conspiracy.

The mounting pressure and negative press caused Mayor de Blasio and city hall officials to lobby for López Rivera to decline the award, in a reversal of the mayor’s public support of the board’s decision. López Rivera subsequently issued a statement of his own declaring that he would indeed march at the parade, "not as your honoree but as a humble Puerto Rican and grandfather who at 74 continues to be committed to helping raise awareness about the fiscal, health care and human rights crisis Puerto Rico is facing at this historic juncture.” 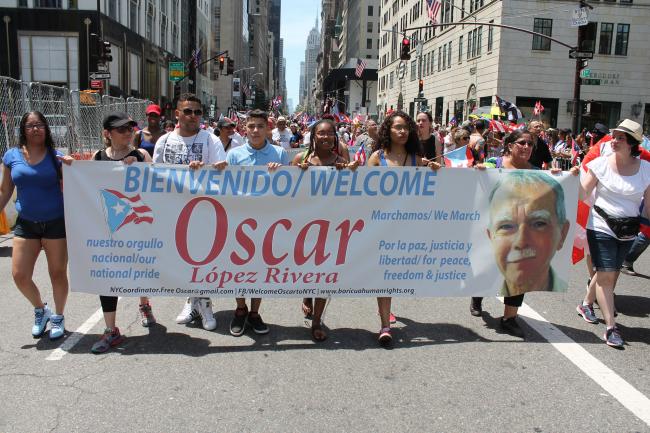 According to reporting by veteran journalist Juan Gonzalez, the smear campaign against López Rivera and the NPRDP was led by the right-wing Media Research Center in Washington, D.C., which has ties to Breitbart News and the Trump administration. New York City Council Speaker Melissa Mark-Viverito, an outspoken supporter of López Rivera, claimed that forces within Puerto Rico Governor Ricardo Rosselló’s New Progressive Party (PNP) initiated the backlash. López Rivera himself suggested involvement by the FBI.

Rosselló and the PNP organized a non-binding referendum on the island’s status, which was also held on June 11th, as part of an attempt to force Congress to make Puerto Rico the fifty-first state. However, every political party on the island other than Rosselló’s PNP boycotted the referendum, which was seen as biased and wasteful. Only 23% of registered voters turned out, in a stark contrast to prior referendums and elections which typically draw upwards of 70% of Puerto Rican voters to the polls.

The stories on López Rivera and the parade cited his association with the Puerto Rican independence paramilitary group, Fuerzas Armadas de Liberacion National (Armed Forces of the National Liberation, FALN) in order to label him a “terrorist,” and linked him to the 1975 bombing of Fraunces Tavern in Manhattan, which killed four people and severely injured others. López Rivera was effectively blamed for the deadly bombing in the press, even though the federal government with all its resources never found evidence connecting him to any bombings to link him to that event in court. In fact, López Rivera was never convicted of any violent crime. Absent from their overly simplistic narrative, repeated ad nauseam across the major TV networks, was any attempt to provide historical context for his case.

An Ongoing Legacy of Colonial Oppression

The FALN emerged out of Chicago during the 1970s at a time when civil rights and radical activists across the country were facing violent repression by local police and the federal government. It was also in Chicago where, in 1969, Black Panther Party leader Fred Hampton was shot to death by police as he slept, in his apartment next to his pregnant wife.

At the time, Black, Puerto Rican, Chicana/o, and Indigenous communities in the United States were under siege by U.S. intelligence and law enforcement, while anti-imperialist and national liberation movements were underway in Africa, Asia, and Latin America. One cannot understand the FALN without first understanding the decades of violence, assassinations, torture, and political repression committed by the U.S. government against the Puerto Rican people in general, and pro-independence activists in particular, which led certain sectors of the movement to resort to armed struggle.

The FBI has a long history of persecuting and criminalizing independentistas, people who believe in or advocate for Puerto Rican independence, both on the island and in the diaspora. The media hysteria surrounding the parade certainly fits the pattern of efforts by U.S. colonial authorities, the FBI, and the intelligence branches of the U.S military to create a culture of fear in order to suppress the independence movement.

This history goes back to 1898 when the U.S. military seized control of Puerto Rico, documented in Ramón Bosque-Pérez and José Javier Colón Morera’s edited volume from 2006, Puerto Rico Under Colonial Rule: Political Persecution and the Quest for Human Rights. Since its creation in the 1930s, the FBI has conducted illegal surveillance of pro-independence activists, infiltrated peaceful leftist groups, interfered with electoral processes, and trained top members of the Puerto Rico Police Department. U.S.-sponsored political persecution has led to assassinations, including the FBI killing of pro-independence and socialist leader, Filiberto Ojeda Ríos, in 2005, the imprisonment of hundreds of Nationalist Party members, draft resisters, and other dissidents, and widespread human rights violations.

Beginning in 1987, inquiries by the Puerto Rico Civil Rights Commission and legal battles revealed that the Puerto Rico Police Department had been compiling secret files and lists, known as carpetas, of the legal political activity of tens of thousands of people and organizations for decades. La Mordaza, an “anti-sedition” law famously referred to as “the Gag Order” by Puerto Rican Senator Leopoldo Figueroa, is another egregious example of how pro-independence speech and political activity have been criminalized in Puerto Rico.

As Ivonne Acosta-Lespier explains in Puerto Rico Under Colonial Rule, the Gag Law, in place for nearly a decade, from 1948 to 1957, acted as an extension of the Truman Doctrine as part of the United States’ Cold War attempt to suppress communist and revolutionary movements in Latin America. In this era, the U.S. military enhanced their presence in the Caribbean, where their mission involved targeting so-called “subversive” groups for elimination. Free speech and other basic rights of students, professors, workers, and ordinary citizens were aggressively violated. Simply being a member of pro-independence groups was enough to get you arrested. This, of course, devastated the Puerto Rican Nationalist Party, whose membership and militancy had increased under the leadership of Don Pedro Albizu Campos. It also opened the path for the rise of the Partido Popular Democrático, and the island’s current Commonwealth status. 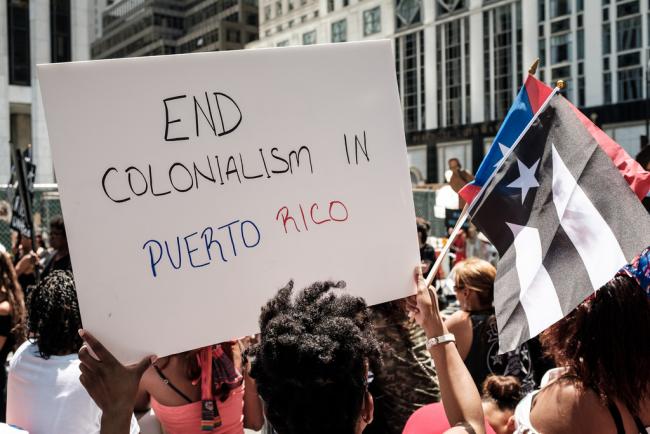 The criminalization of dissent continues to this day. The ongoing campaign against López Rivera and the repression of University of Puerto Rican students protesting plans to drastically cut the University’s budget can be understood as a continuation of this legacy of political persecution. The students emerged as the leading force in Puerto Rico’s anti-austerity movement against an unelected fiscal control board that was imposed by the Puerto Rico Oversight, Management, and Economic Stability Act (PROMESA), passed by the U.S. Congress and signed by President Obama in 2016. Central to students’ demands was an audit of Puerto Rico’s ballooning debt, much of which many Puerto Ricans claim is illegal. Although the strike ended on June 5th, protests will continue, and student-led initiatives in the U.S., such as the Puerto Rico Syllabus and CUNY Solidarity with UPR are being organized as efforts to build solidarity with and lift the voices of our sisters and brothers on the island.

López Rivera being honored at the parade was perceived as threatening because he embodies the anti-colonial struggle. Prior to his incarceration in 1981, he worked to improve the economic and educational conditions of the people in his Chicago community, and he, like many others, linked the suffering of Puerto Ricans in the diaspora to the colonial condition of our homeland. His participation and his voice at this highly publicized event made it difficult to ignore an underlying cause of the current economic crisis ravaging Puerto Rico, one that politicians conveniently avoid discussing: U.S. colonialism. And that is precisely what makes this issue so relevant. López Rivera reminds us, as he did on the June 8 broadcast of Democracy Now!, that “colonialism is a crime against humanity,” and that if we tolerate colonialism, we are tolerating a crime. 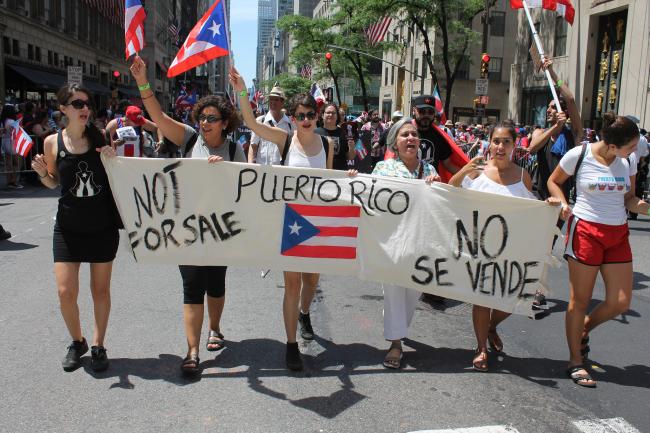 Fortunately, a counter-discourse to establishment media’s outrage began to emerge in the press and on social media in the days leading up to the parade. Community activists, artists, journalists, and López Rivera himself declared that U.S. political and economic elites cannot dictate who Puerto Ricans choose to honor at our own parade.

More important than whether López Rivera was officially honored by the NPRDP is the fact that he survived 35 years of imprisonment without a sound charge, keeping his integrity, his intellect, and his revolutionary spirit intact. Despite enduring 12 years of solitary confinement—which is considered torture by the Center for Constitutional Rights —López Rivera emerged full of love for humanity and remains committed to “luchar y trabajar,” struggle and work, for the decolonization and liberation of the Puerto Rican people.

His release on February 9, 2017 is a victory for the countless community activists, artists, educators, elected officials, clergy, and others who relentlessly organized for decades across the country, in Puerto Rico, and internationally on his behalf. The campaign that won his freedom is a reminder that victories are possible and will serve as motivation for the challenges we currently face.

Despite multinational corporations’ boycott at the June 11th parade, cultural groups and delegations from various diaspora communities and Puerto Rico participated as they always have. Community groups had more room to shine without Goya logos and other corporate advertising dominating the parade. Let this 60th anniversary of the parade be the beginning of new era that the Puerto Rican community as a moment for our voices, concerns, and politics can be heard.

Ricardo Gabriel is a Doctoral Candidate in Sociology at The Graduate Center of the City University of New York and member of CUNY Solidarity with UPR.