A Political Purge in Brazil

How should the Left respond to Lula's corruption charges? 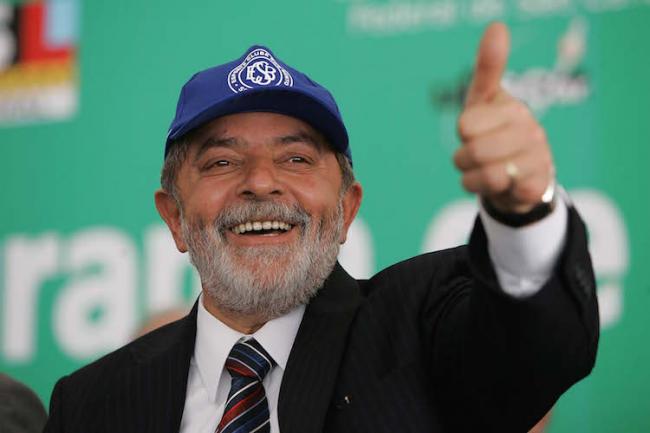 Brazil’s ex-president Luiz Inácio Lula da Silva and pre-candidate for president in 2018 for the Workers’ Party (PT) was convicted yesterday of corruption and money laundering, receiving a sentence of nine years and six months in prison. Lula was condemned for supposedly accepting a luxury beachfront apartment from the massive construction conglomerate, OAS, in exchange for facilitating lucrative contracts.

He remains free until his appeal is judged, which could take up to a year and half. Theoretically he could still be eligible to run in the 2018 elections, but if his conviction is maintained before this, he will lose all his political rights for twenty years.

The judicial decision comes at a time of almost daily political bombshells in Brazil: the day before, a bill that drastically cuts labor rights was passed in the Senate while President Michel Temer, who took office after the PT’s Dilma Rousseff was removed in a parliamentary coup, struggles desperately to save his own mandate after he was caught red-handed on tape discussing bribes and interference in judicial processes with an executive from a multinational meatpacking corporation. Numerous other government politicians who were key players in the coup against Dilma in 2016 are also facing a range of criminal accusations. The fact that they have not yet been charged and still maintain their political power and privileges says a lot about the current political crisis in Brazil.

How should the Left respond to Lula’s condemnation?

We must categorically oppose the criminalization without proof of Lula and the PT. The seven-hundred-page judicial sentence of Judge Sergio Moro against Lula is rife with inconsistencies, contradictions, and technical errors. Above all, it lacks clear evidence that Lula was the real owner of the beachfront property.

Moro convicted Lula based on a series of affirmations without documentary evidence while ignoring substantial evidence that proved the contrary. Even mainstream judges and lawyers who are against Lula have roundly criticized the decision, demonstrating the extremely political decisions of Moro who has well-established links with right-wing parties and politicians.

Yet this does not mean that the Left should support the PT’s and Lula’s political project. We need to defend democratic freedoms and denounce the arbitrary and prejudiced practice of the Lava Jato, or “Car Wash,” investigations without joining the dead-end reformism of the PT.

Even after the impeachment of Dilma, the electoral failures of the PT, and the concentrated attacks on labor and social rights, the PT has refused to change its “neoliberal lite” political project that aims to reestablish alliances with big corporations and so-called centrist parties. The CUT, the main trade union federation allied to the PT, has only reluctantly mobilized against the draconian cuts of the Temer government. While it remained silent about the reactionary labor legislation that was passed in the Senate on Tuesday, it actually enthusiastically called for street demonstrations against Lula’s conviction on Wednesday.

It is abundantly clear that the Lava Jato investigation represents the judicialization of politics — that is, the dependence on the courts in deciding fundamentally political questions. Yet judges are clearly not neutral and apolitical. Lula was condemned with little evidence while dozens of right-wing politicians have been favored by judges with whom they have documented personal and political relationships. The conviction of Lula, who is consistently first place in the polls, is about taking him out of the presidential race in 2018.

Some on the Left have mistakenly embraced the Lava Jato investigations, seeing it as a tool to end the blatant corruption of politics in the country. This position ignores that judges and public prosecutors are firmly part of the capitalist class with determined political interests — in this case, taking Lula out. Indeed, various judicial organs support many of the draconian attacks on labor and social rights that are being rammed through the congress by the illegitimate government of Temer.

Uncritical support of Lava Jato also ignores the fact that the entire left, social movements, and unions are tarnished by the witch-hunt against the PT. The PT did not invent corruption in Brazil, yet the Right and the corporate media have used the fact that the party embraced the business as usual politics of corruption and bribes to attack social movements and the Left as a whole.

The political and economic crisis is far from being resolved. Such a resolution will depend on the capacity of social movements, unions, and left parties to block the attacks on labor and social rights (which not even Lula himself has indicated he will not repeal if elected), force Temer out of the government, demand direct elections for president and the Congress, and construct a viable political alternative.

The PT’s politics of class conciliation and the embrace of neoliberalism shows the need for a socialist political alternative. But this will not come through the prejudiced Brazilian judiciary and their flimsy charges against Lula.

Sean Purdy teaches the history of workers’ and social movements at the University of São Paulo and is an activist in the Party of Socialism and Freedom (PSOL).