In Brazil, Ládio Veron, the son of slain Guarani activist Marcos Veron, continues to struggle for the rights and dignity of his people. 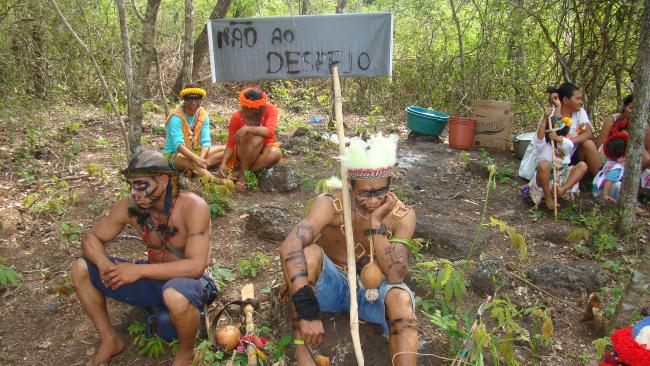 Throughout May, indigenous protestors armed with spears, bows and arrows rallied against planned legislation put forward by Michel Temer’s interim conservative government to strip the National Indian Foundation (FUNAI) of the power to determine indigenous territories. In the streets of Brasília, protesters faced the tear gas and rubber bullets of Brasília’s riot police. The law, if passed, would leave decisions about indigenous territories to Congress, dominated by the powerful agribusiness lobby – part of the so-called Beef, Bullets, and Bible Caucus.

Temer’s 2016 government takeover has intensified efforts by agribusiness and ranching interests to evict indigenous peoples from their ancestral lands through intimidation and violence. The Guarani-Kaiowá tribe has often borne the brunt of such repression – their home state of Mato Grosso do Sul has the country’s highest rate for murders of indigenous peoples. In fact, the Brazilian government’s conservative turn appears to have further emboldened local landowners – there are videos online of hired gunmen driving through Guarani reserves, shooting at unarmed civilians. Last June, a violent attack in a Guarani community left a health worker dead and six others wounded, including a 12-year old boy.

The Guarani-Kaiowá have spent decades as refugees on their own lands, eking out a living on the few overcrowded reserves they have been granted (like Dourados, where 12,000 Guarani live on about 11.5 square miles of land), or in informal camps, sandwiched between dusty roads and vast, fenced-off farmland.

What the Guarani-Kaiowá have suffered is often described as a “slow genocide.” In the first century after the arrival of the Portuguese in 1500, over 90% of Brazil’s indigenous population was killed. Yet the Guarani-Kaiowá were largely spared the initial ravages of colonization because they inhabited the densely forested and less accessible Brazilian interior (Guarani-Kaiowá translates as “people of the forest”, and Mato Grosso do Sul as “thick forest of the south”). Still, the ever-expanding appetite for tea, beef, sugar and soy pushed European settlers further into Guarani lands. The 20th century saw the mass displacement of indigenous peoples throughout Brazil, including the Guarani-Kaiowá, in a colonization initiative known as the March to the West.

Even after suffering evictions from their own lands, the landowners’ monopoly over local employment and a lack of land for hunting, fishing, and planting still leave the Guarani-Kaiowá no choice but to work for the same families that occupy their ancestral territory. According to Fiona Watson, campaigns director at Survival International, wages are meager, barely reaching subsistence and sometimes paid in alcohol.

By 1964, when tanks stormed the modernist government buildings in Brasília, ushering in over two decades of brutal military rule, Brazil’s indigenous peoples were facing total annihilation. As part of its national development plan, the military government intensified colonization efforts in the indigenous territories of the Brazilian interior, which, together with a pervasive judicial impunity, effectively legalized the murder of Indians.

Even with the 1985 return to democracy, change remained painfully slow. While the 1988 Constitution recognized native Brazilians as human beings for the first time and pledged to recognize all indigenous lands within five years, less than half have been formalized today, nearly thirty years later.  Mato Grosso do Sul only granted indigenous people labor rights in 1999.

Given these conditions, the Guarani have relied on retomadas, or reoccupations of this ancestral territory, to reclaim their homelands.

Cacique (chief) Marcos Veron of Takuára village led several such reoccupations, all of which failed. In 1997, a local judge ordered the tribe to leave, and in 2001, heavily armed police and soldiers forced them off the land.

Veron was born on Guarani land, sometime between 1928 and 1932. Throughout his life, he had seen his community become increasingly marginalized, both physically and socially. In 1953, after years of gradual incursions, cattle ranchers forced his community off their lands entirely. However, he went on to become an internationally recognized defender of Guarani rights, and even toured around Europe in 2000 to raise awareness of the plight of his people.

In January 2003, Veron led his final retomada, leading about 100 Guarani-Kaiowá onto the grounds of the massive Brasília do Sul ranch.

He was aware of the risk of doing so. The day before, according to his son Ernesto, he said, “We are going back onto our land and we are never going to leave again. If they kill me, you will all continue to fight because Takuára is our land. Do not let them destroy our reserve.”

That morning, Veron stood his ground as a band of gunmen descended upon their makeshift camp. Suddenly, in front of nearly 100 witnesses, one of the assailants thrust the butt of his rifle into Veron’s head, fracturing his skull. Veron’s family, friends and neighbors were indiscriminately attacked while Veron was struck again and again, his blood soaking into the rich red soil. He died a few hours later.

The tragedy was just one example of centuries of violence, repression, and discrimination against the Guarani-Kaiowá. That Veron’s murder received any kind of investigation at all was highly unusual. After a protracted eight-year legal battle, three of the assailants were charged on the lesser crimes of criminal conspiracy, torture, and kidnapping. The local rancher who allegedly orchestrated the killing, Jacinto Honório da Silva, was never convicted, and continues to threaten the Veron family.

Marcos Veron’s son and current cacique, Ládio Veron, retraced his father’s journey in a speaking tour around Europe in early 2017, bearing a list of demands nearly identical to that of his father. “We want a dignified life in Mato Grosso do Sul, Brazil, far from the paramilitaries who are there today. We want peace. We want to live on our own sacred lands,” he told audiences in 12 different countries.

These lands, just a tiny fraction of the Guarani-Kaiowá’s former territory, have already been identified and declared. But landowners have fiercely contested the final step that would allow the Guarani-Kaiowá to return— physical demarcation— and forced suspension of the process in 2010.

Speaking in crowded lecture halls and parliament buildings – often wearing an ornate feather headdress, his face painted in black and red – it was clear that Ládio had inherited his father’s righteous anger and firm conviction. On each occasion, he recited a litany of appalling abuses, painting a vivid picture of both grueling hardship and resolute defiance. 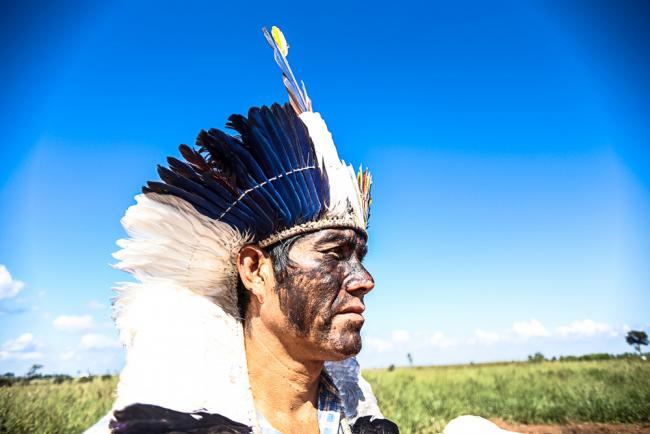 Ládio Veron had campaigned extensively for former president Luiz Inácio Lula da Silva, buoyed by the promises he made to complete the final step for the Guarani-Kaiowá to return to their lands. Yet in a pattern all too familiar in indigenous communities throughout the continent, once in office, Lula made only a few small concessions to the Indians, or what Ládio describes as “breadcrumbs.”

His successor, Dilma Rousseff, declined to even meet with the Guarani-Kaiowá. “Dilma didn’t give us anything,” Ládio told me, “but at least she didn’t make any promises.” Still, the indifference of these administrations pales in comparison to the current government’s hostility, and Ládio, like many others, considers Michel Temer’s ascension to the presidency to be a parliamentary coup. While in Europe, he would often describe Temer as a golpista – a coup leader – and would hold up signs reading Fora Temer.

Ládio and his community have been truly left by the wayside. Life as a Guarani-Kaiowá today is precarious at best. According to one report, 390 Guarani-Kaiowá leaders were assassinated between 2003 and 2014, starting with Marcos Veron. Poverty and hunger are rife, while crowded, informal housing, together with pollutants from the surrounding farms and roads, have led to countless preventable deaths from malnutrition, diarrhea, and other illnesses. The life expectancy for a Guarani-Kaiowá is just 45, while the infant mortality rate is a staggering 38 per 1,000 live births, equal to the rate in India or Uganda. In Ládio’s view, “Brazil today puts the rights of soy above the rights of indigenous children.”

What is harder to grasp is the cultural violence these communities experience. According to Guarani legend, their ancestors spent centuries searching for the mythical “land without evil.” Where they settled is known as Tekoha, the place of being, of belonging. In the words of Guarani ethnologist Tonico Benites: “With no land to maintain their ancient cultures, the Guarani-Kaiowá feel ashamed and humiliated. Many feel sad, insecure, unstable, scared, hungry and miserable.”

These feelings, sharpened by the upheaval of traditional social structures and incessant persecution, find expression in tragic ways – rampant alcoholism and suicide. The suicide rate for the Guarani-Kaiowá is 34 times the national average, one of the highest rates in the world.

Driven by a simple dream of living “uma vida tranquila” – a peaceful life – Ládio’s only recourse is to tell his story. He hopes this will keep the spirit of his father and his people alive, even thousands of miles away from his homeland.

Eimhin O'Reilly is a writer and activist based in Dublin, Ireland, specializing in issues relating to the Global South. He works for the Latin America Solidarity Centre and Debt and Development Coalition Ireland.