From climate change to dependence on tourism, the Caribbean today faces a variety of existential threats. 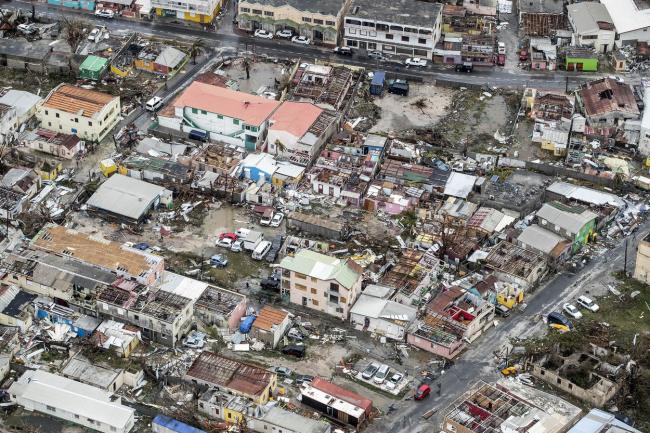 Last week, a barrage of hurricanes hit the Caribbean with a frequency unrivaled in modern history. Hurricane Irma was the largest, causing the most damage to the Leeward Islands and Greater Antilles, particularly Antigua, Barbuda, Cuba, Haiti and the Virgin Islands.

After the hurricane, the media—disappointingly but unsurprisingly—crafted hyperbolic, racist headlines contrasting descriptions of the tourists as the real victims of the hurricane with locals characterized as a second life-threatening obstacle that had to be overcome. One British paper reported that “hungry locals on the islands have even started fighting each other for food and there have been reports of looters raiding hotel rooms to profit from the disaster. Tourists have broken down in tears as they have eventually been able to leave the islands devastated by the hurricane.” Several media reports upped the intensity, stating that St. Martin was “on the verge of civil war” after the hurricane passed. The reality was that people were just trying to get their hands on what they needed to survive.

Just as in Haiti after the 2010 earthquake, we are seeing is a man-made disaster unfolding along several dimensions. While the media coverage of the hurricanes finally prompted many to admit for the first time that the climate change does exist and is the most visible culprit for explaining them, the seeds of this destruction have been cultivated over the past thirty years.

While it doesn’t make for catchy headlines, the reality is that as the Caribbean has been hit by stronger and stronger storms in recent decades, while state capacity to respond to natural disasters has diminished due to increased levels of debt, reduced government revenue and lower development aid. This has led to skyrocketing rates of food insecurity, poverty, and unemployment. On their own, the Caribbean cannot adapt fast enough to face the relentless destruction brought about when climate change is thrown into the mix.

This multitude of systemic challenges led to one of the region’s leading intellectuals, the late Norman Girvan, to remark in 2010 that the Caribbean faces “existential threats” on a number of fronts. Girvan went on to state that “30 years ago, one expected to deal with major disasters of this kind, say, once every ten years. Nowadays, most islands expect at least one, and possibly two or three, every year. In other words, this now has to be seen as a permanent, recurring phenomenon or integral feature of Caribbean development.”

The increase in natural disasters in both frequency and intensity is evident in Haiti, devastated by Hurricane Matthew in 2010, which left over 1,000 people dead, 55,000 homeless and an estimated 80 percent of food crops destroyed. The storm decimated critical infrastructure, leaving Haiti with no other option than to descend deeper into debt. After international politicians and NGOs collected and fraudulently diverted billions of dollars for relief efforts from their intended use, Haiti took out loans from the International Monetary Fund. To make matters even worse, Hurricane Matthew contaminated water sources across the island, triggering a spike in the cholera epidemic that Haiti has been fighting since its introduction by United Nations troops in 2010.

Beyond the destruction wrought by hurricanes, the region has faced a seemingly contradictory mix of both droughts and extreme hurricanes. These extreme variations in weather have wreaked havoc across the region. It has become increasingly vulnerable to water shortages, making sustaining agricultural and tourism industries nearly impossible.

The Other Side of Paradise: A Tale of “Riches to Rags”

Meanwhile, the region’s dependency on an unsustainable model of tourism is becoming increasingly visible. Tourism has now become the main economic engine of the region, providing much-needed employment and government revenue – and in many instances, but often at the expense of much needed diversification in other sectors. In Antigua and Barbuda, tourism contributed 60 percent to GDP in 2016. Given that tourism is an incredibly vulnerable industry, Caribbean economies have been restructured to balance on a knife’s edge.

Over the past 30 years, the Caribbean has been transformed from an agricultural producer with comparatively healthy domestic economies, to an archipelago of predominately foreign-owned all-inclusive resorts and offshore tax havens, in what has been called a tale of “riches to rags.” Decades of trade liberalization, structural adjustment policies, and the consequent economic crisis have destroyed the agricultural industry that was once the lifeline of so many islands. Alongside low and stagnant growth across the Caribbean, in combination with rising food prices, in 2014 the region now has an annual food import bill of $4.5 billion.

On social media, tourists and reporters covering the aftermath of the storm were alarmed that local people across the affected islands entered hotels for food and water in order to survive. But to those from the region, it was common sense. Water rationing has become commonplace across the Caribbean, as reservoirs are at record lows—and hotels supply bottled water to tourists.

Fueled by a mix of imported food, drinks and cheap, disposable labor where locals serve tourists in resorts as variations of domestic servants, from driver, chef, maid or security guard, the region’s economy has become overly dependent on an industry that is largely disconnected from the majority of the local people, and does not bring meaningful economic development.

According to the United Nations Environment Programme, the Caribbean leads the world in tourism “leakage”—meaning an estimated 80 percent of money spent by tourists ends up leaving the region via foreign-owned hotels, operators, airlines, imported food and drinks, and the like. A lack of regulation discourages the creation of much needed linkages with the local economy, for example through jobs for farmers, food processors, and artisans.

A 2015 survey of nearly 2,000 visitors to all-inclusive resorts in the Caribbean revealed that less than 20 percent had left the resort in order to patronize local restaurants, bars, or attractions. Combined with the fact that multinational corporations force islands into cutthroat competition with each other, resulting in resorts receiving 25-year tax holidays, all-inclusive resorts have had a negative impact on local economies.

The unhealthy dependency on tourism means that heavily damaged islands like Barbuda will take a double hit. Resorts will be closed for peak tourism season, leaving many unemployed and unable to reconstruct their homes. Once tourists have evacuated and the camera crews disappear, the Caribbean will be left alone once again to patch up the damage before the next “storm of the century” rolls up again, all too soon.

A 2008 report from Tufts University on climate change and the Caribbean stated that the combination of increased hurricane damages, loss of tourism revenue, and infrastructure damages will cost the region $22 billion annually by 2050—10 percent of the current Caribbean economy— and $46 billion by 2100—22 percent of the current Caribbean economy. Due to the repeat reconstruction of resorts, it could only be a matter of time before resorts decide that the Caribbean is too unstable and unprofitable due to extreme weather, killing the Caribbean’s largest industry, however problematic, and plunging it further into economic devastation.

It is worth noting that the Caribbean (aside from Trinidad) contributes a disproportionally low proportion of carbon emissions globally, yet exists on the front lines of climate change in a state of paralysis. As always, the poorest and most vulnerable are hit hardest by the actions of the wealthy.  Evidence of climate change abounds. As Norman Girvan has said, “Caribbean leaders must take the fight to a higher level.”

The Philippines have filed a legal case against the world’s largest oil companies for violating the human rights of local people: carbon-based climate change was responsible for a 2013 storm that killed thousands and resulted in billions of dollars in damage. The Caribbean Community (CARICOM) could follow such an example. Furthermore, states that are major contributors to carbon emissions must be targeted and challenged in a similar manner.

Such a move is not without precedent in the region, as 14 Caribbean nations have launched a lawsuit against European colonial powers for their role in engaging in the enslavement and genocide of African and Indigenous people. This will no doubt have adverse repercussions in terms of economic and political retaliation. But, as the power and persistence of environmental disaster increases in the region, the status quo is killing the people of the Caribbean.

Kevin Edmonds is a PhD candidate and instructor at the University of Toronto, whose research examines the connection between trade liberalization, the decline of the banana trade and the rise of marijuana cultivation/trafficking in the Eastern Caribbean islands of St. Lucia and St. Vincent.